Fossil Rim is dedicated to the conservation of species in peril. If you visit us on any given day, you can see a piece of that conservation in action in the form of our resident animals. However, our mission goes much further than that, and this year two of our staff members had the opportunity to participate in the release of several endangered antelope back into their natural habitat. Transporting species abroad is a complicated matter, but one that is vital to restoring populations. We’re breaking down the process of this year’s release in two blog posts so that you can follow along with conservation in action.

Several years ago, Fossil Rim got our first opportunity to work with Sahara Conservation and Environment Agency—Abu Dhabi. Thanks to our specialization in a variety of endangered desert animals, the organizations have invited staff members like Adam Eyres, our Director of Animal Care, and Dr. Julie Swenson, our Associate Veterinarian,  to lend our knowledge. This partnership began with scimitar horned oryx, before involving addax, dama gazelle and even ostrich. Our team members have been able to participate in several captures,  and several release programs over the years, including one this past March. In this case, the program involved transporting wildlife being held in the United Arab Emirates, and managed by the Environment Agency–Abu Dhabi, to a pre-release location in Chad. It also meant over 30 hours in a plane, traversing bumpy roads and coordinating with groups across international borders- all while transporting fragile cargo. So, what did this incredible trip look like for our team members?

Before anything else, Julie and Adam had to contend with travel. For them, this meant figuring out how to get from Dallas, Texas all the way to Abu Dhabi, where the antelope awaited them.

On trips like this one, Julie says that when it comes to the travel itself, not a lot of coordination regarding timing, at least on a large scale, is needed on our side. Because there are such large, international organizations helping to oversee these releases, and seasonal rains to consider, Fossil Rim simply needs to wait for the call to action. Once that occurs, many conversations go on between the various teams to sort through exactly what is needed, who needs to get it, how it needs to get to the right location, and how to accomplish the overall goals of the trip with the least amount of disruption to the animals that are involved.

The team spent well over 20 hours traveling to Chad.

However, just getting to Abu Dhabi also required some careful planning. As can be expected, the trip is not a straight shot and took the two first to Atlanta before Paris, and finally from Paris to Abu Dhabi. As Adam puts it, everything had to be perfect, because a single time delay could throw the whole trip off balance. After hours spent in the air, navigating Covid restrictions and waiting around in various airports, they finally made it to Abu Dhabi, where the real work began.

After all of the movement in previous days, upon arrival in Abu Dhabi, it was immediately time to travel to the Environmental Agency— Abu Dhabi’s holding facility to prepare the antelope for transport. Out of several dama gazelle, five who fit the necessary criteria were separated from their herd as the team prepped. Soon, vet supplies were measured and sorted, and everything was put into place for the next day’s events.

Bright and early the next morning, the crew had no time to waste. At Al Ain International Airport, 20 scimitar-horned oryx and five dama gazelle were loaded into transport crates, then loaded into a cargo plane. The cargo plane was a massive Soviet-era Ilyushin, able to comfortably fit all 25 carriers, the entire team and supplies.

Obviously, air travel with wild animals is a complicated operation, and the safety and care of the animals are a top priority. As soon as the plane was in the air, the team opened hatches on the crates to allow the animals fresh air and provide drinking water during the five-hour flight. When they were confident that each individual was comfortable and calm, there was nothing left to do but wait. The team relaxed as best they could in the noisy cargo hold as they prepared for the rush that would ensue once they landed.

The team’s final destination, the Ouadi Rimé-Ouadi Achim Faunal Reserve (OROA) in Chad, is one of the largest nature reserves in the world, and the largest in Chad itself. It sprawls over 30,000 square miles of sub-desert grassland, desert and Sahelian wooded grasslands. In short, Fossil Rim comprises only about three square miles of land, on which hundreds of animals can live. The size of OROA, as well as its rural nature, is a massive benefit to animals, but it comes with some inconveniences for humans. For instance, the only airstrip in OROA has no runway lights, which meant the team had to make it before nightfall. This, however, was proving to be a challenge, as between them and the reserve was a quick landing in the Chadian city of Abeche. 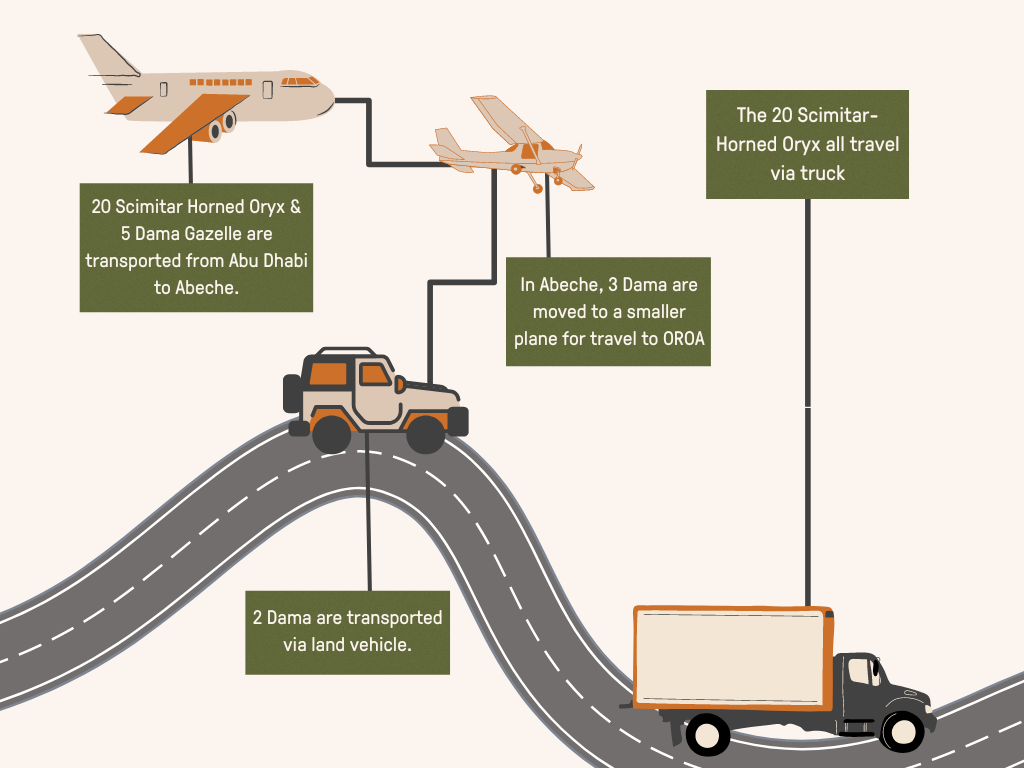 Compared to scimitar-horned oryx, dama gazelle are a physically fragile species, and the team considered that being in a crate for the 12+ hour drive from Abeche to OROA may not be ideal for their stress levels. To minimize this potential risk, it was decided that once the team landed in Abeche, the five dama would be removed from their crates, sedated, and loaded into a smaller plane without the crates, where the team could keep an eye on them as they flew the much shorter 35 minute flight to OROA. The entire process was streamlined, but nightfall was still fast approaching.

By the time the team landed at Abeche, there were only 15 minutes left to move the animals from one plane to another. To ensure they made it to OROA before sunset, it was decided that two of the five dama would be transported via truck rather than plane. Although it was a longer journey, the team felt it was better to have the animals on the road rather than waiting overnight in crates so that all five of them could fly together the next day. So, three of the five damas were prepped and moved to the smaller aircraft and flown to OROA.

Finally, after an additional 35 minutes of air travel, the team arrived at OROA just as the sun began to set. Although it was close, everything ran according to plan, and the three dama gazelle were unloaded and left to wait for their two herd mates. The team settled in for a night of rest before the other antelope arrived the next morning, and preparation would begin for the final release.

As you may have noticed, the process of releasing any animals, even into a controlled space is incredibly complex and lengthy. Keep an eye out for the next installment to see what goes into the monitoring of previously released animals, and how the transported species adjust to their new holding environments.

Safety In All Its Forms