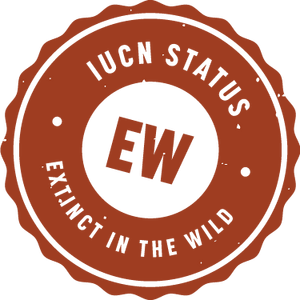 The scimitar-horned oryx, or SHO, is of course named for its incredibly long, backwards-curving horns, which can grow over 36 inches long. It is the only one of the four oryx species with curved horns, and both males and females sport them.

The SHO’s horns are used mainly for ritualized sparring competitions between rival males, but also during courtship. Their coat is white with an orangish-tan neck and chest, as well as a brown stripe over their eyes. These colors are perfect for their desert habitat, as it not only helps them blend in, but cool off.

Scimitar-horned oryx are highly selective feeders who by and large utilize plants with high-water and high-protein content. Because of their ability to locate and select these water-rich plants, as well as their ability to physically conserve water, these oryx are capable of going for months without truly drinking.

Their white coat helps reflect the heat of the desert, while their black skin and tip of the tongue protect against sunburn. They have large, flat hooves that enable them to walk easily on sand, as well as dense eyelashes to protect their eyes from debris and wind.

Due to the heat of their natural habitat, scimitar-horned oryx can tolerate an internal body temperature of 116 degrees Fahrenheit. Researchers have found that this is in part due to a network of fine blood vessels that cool blood as it's carried from the heart to the brain.

Scimitar-horned oryx become inactive in the heat of the day and will both seek shade and dig out scrapes in the sand to reduce exposure to drying winds. Consequently, they primarily graze at night. At Fossil Rim, they are most likely to be seen by guests in the morning.

The scimitar-horned oryx once abundantly roamed the grasslands of Africa, but human interference and habitat loss dwindled their numbers to nearly nothing. By the late 1980’s they were considered extinct in the wild. However, thanks to efforts orchestrated by organizations like the Environmental Agency – Abu Dhabi and Sahara Conservation, 23 animals were able to be released into native habitat in March 2016. This release and others aimed to steadily increase the animals in Chad over the next few years, and by May 2021 there were more than 360 semi-wild oryx.

Presently, animals from captive populations worldwide, including Fossil Rim, have formed a World Herd in Abu Dhabi, from which release animals are drawn. Although scimitar-horned oryx do fairly well in captivity, they do not always fare well in the wild. For this reason, scientists have continued to monitor the health of wild herds through radio collaring and more.

VIEWING TIPS
Scimitars like to hang out by the cattleguard separating the buffer and front pastures. 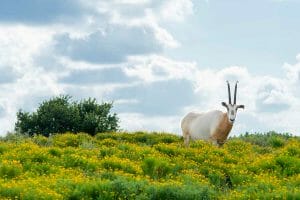 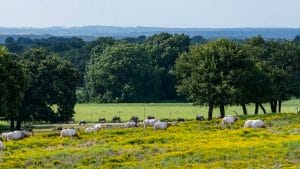 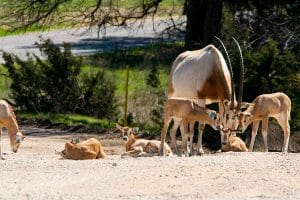