Every April for the past 11 years, Glen Rose Intermediate School (GRIS) third graders journey to Fossil Rim Wildlife Center for a day of education, enlightenment, and, of course, fun.

That “journey” is a whopping 7.5 miles to the Fossil Rim Overlook area, but the wildlife center is a foreign land to many of these students before they reach third grade.

“We asked for a show of hands this morning, and about 40 percent of the (121) students hadn’t been to Fossil Rim before,” said Candace Stegint, a third-grade teacher at GRIS. “I always hope the students come away from this visit with an appreciation for nature. I want them to value the animals, plants, and land – have a love for life.

“We teach them about community, ecosystem, habitat, population, and more. This helps them learn a lot about all of those, plus what a nonprofit organization means.”

Including teachers, the crew of 130 people divided into four groups – Giraffe, Zebra, Rhino, and Cheetah – when they arrived as the park opened on April 9. Two of the groups began with a guided tour and visit to Fossil Rim’s compost facility. 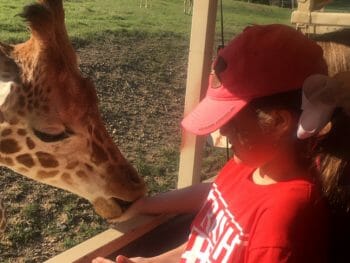 Meanwhile, one of the other groups went on a nature hike, while the final group headed to the Children’s Animal Center (CAC) to make enrichment items for the exotic birds and learn about animal training. Each group rotated until it had completed all activities, with only lunch halting the action along the way.

“I really like the way (Reserved Programs Supervisor) Andrew (Bullard) and (Director of Education) Jennifer (Arledge) organized our visit this year,” Stegint said. “They made sure we visited the compost piles to see where the students’ food waste collected from our lunchroom goes. (Natural Resources Manager) Caitlin (Pyle) visited the kids at school earlier this year, and they always knew we’d see where their food waste went on this visit. Having half of the kids on tour and seeing the compost while a quarter of them were hiking and the other quarter were making animal enrichment items for the birds and seeing animal training – that was a great way to split it up.”

“We saw giraffes early in the morning, and they are always a favorite, along with cheetahs and rhinos,” she said. “Some of the kids are hesitant at first, but everyone on our bus (hand) fed giraffes. We saw an ostrich, and everyone enjoyed when it came up to the bus. From red deer to fallow deer, the students like to see all the different varieties.

“The scimitar (horned oryx), the wildebeest – they really enjoyed all of the animals with horns or antlers. Each student picked one animal (species) beforehand to do a report on, so each one was looking for his or her animal. Using Google Docs, they (previously) researched their animal’s habitat, adaptations and much more.”

April is always a great month to visit Fossil Rim, a notion with which Stegint concurred.

“The park is very lush and green right now,” she said. “We saw a giraffe pull a branch off a tree, and a student pointed out how many leaves were on that one branch. When we went on our hike, we saw a lot of bluebonnets. There was a nice breeze when we were on the bus; I would absolutely say this is an ideal time of year to visit Fossil Rim.”

The teacher was happy the students were able to see Fossil Rim from the guided tour perspective, at least this once.

“I come here every year with my family in our own vehicle and we enjoy it, but going through on the (open-air) buses is a real treat,” she said. “Many of the kids will probably never do that again; they’ll be more likely to come in their family vehicle.”

Stegint stressed how much it means to the students to feel like they are involved in something. For example, making enrichment toys at the CAC and then getting to watch the birds enjoy them was “so cool”. She also explained why the school actively contributing to Fossil Rim’s compost efforts is such a big deal.

“Third graders are new to our campus when they start each school year, and that’s when they begin to contribute to Fossil Rim’s compost program and learn how compost is made,” she said. “For them to feel that connection from their school to Fossil Rim and to see a hay field here that their food waste fertilized, the students understand they are part of a bigger process. It helps teachers in our efforts to educate them to make the world a better place and to get involved. I can hardly talk about this without crying.”

Eyes Of A Third Grader

Third graders Jack Gartrell, Bryar Sanders, and Hartley Evans were kind enough to share some of their thoughts on the visit. The first question asked was what they were most looking forward to about the day’s activities.

“I think it was getting to see the animal I’ve done my research about, the African (spurred) tortoise,” Gartrell said.

“I really wanted to do the hike, because it gets your blood pumping,” Sanders said. “I am researching the cheetah.”

“I really wanted to go on the hike, too,” Evans added. 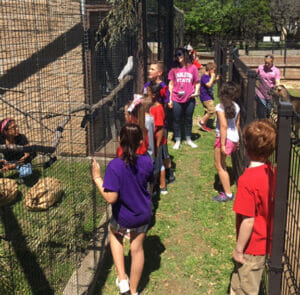 The students were asked what their favorite part of the day ended up being.

“Probably when the giraffe stuck his head in the back of the bus,” Gartrell said. “I was sitting with Cody and it ate almost all of his food.”

“I loved seeing the ostrich, because it reached over the seat trying to grab my friend’s food,” Sanders said.

“I got to go see my favorite animal, the giraffe,” Evans said. “One of them stuck with me and my buddy so much, I started calling it ‘Baby’.”

They were asked what was surprising about the visit. Gartrell said he has been to Fossil Rim several times and so he was not caught off-guard.

“Making a (enrichment) toy for the birds; I had no idea we were doing that,” Sanders said.

“Getting to pet a snake,” Evans said.

Finally, the students were asked about something interesting they learned, and Stegint even contributed a factoid.

“A cool fact most people don’t know is that if a horn falls off, it doesn’t grow back,” Gartrell said. “If an antler falls off, it grows back each year.”

“Cheetahs have black marks under their eyes that help keep the sun out,” Sanders said.

“I agree with Bryar,” Evans said.

“I learned that, instead of being nocturnal, cheetahs are diurnal, which means active during the day,” Stegint said.

From a logistics perspective, a group of 130 people is quite an undertaking for Fossil Rim’s education department.

“I think their visit went really well,” said Assistant Director of Education James Morgan. “The kids who took the first round of tours probably saw more animals. It was warm for an early April day, but the breeze on the bus and on the hike made it feel nice.

“This is a big event for our department requiring a lot of energy and effort, but we try to make every event memorable, large or small. If we get bad weather, we adjust and make sure guests still learn and have fun.

“There were some differences this year, like going to the compost area and talking to Caitlin and (Natural Resources Management Specialist) Vanessa (Hays). Also, in the CAC they got to build enrichment items for the birds and learn about animal training.” 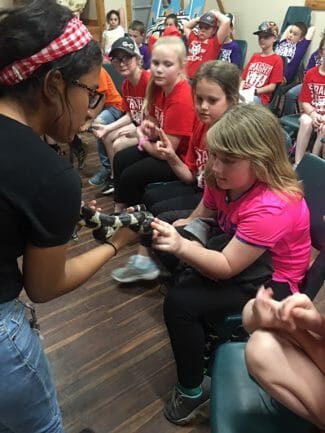 Bullard expanded on the visits to the compost facility and CAC.

“It’s a cool connection between Glen Rose schools and Fossil Rim when it comes to the compost, so I’m glad they got to visit that area,” he said. “They already know Caitlin from school, but now they see where she works and see how everything is connected. We also want to thank (CAC Supervisor) Kristina (Borgstrom) for giving her time and sharing her knowledge of animal training and enrichment. Kristina brought out our corn snake and kingsnake, which was a nice addition to the experience.

“A lot of those (ambassador) animals really help the kids learn that nature isn’t scary – it’s exciting and to be respected. Hands-on activities are the best for young kids, so it’s no surprise they really enjoy making the enrichment items and going out on the hike. Animal care is a very busy department, so for Kristina and her staff to take the time for this group of 130 people was huge for us.”

Morgan is thankful for the cohesive manner in which this event is consistently executed. 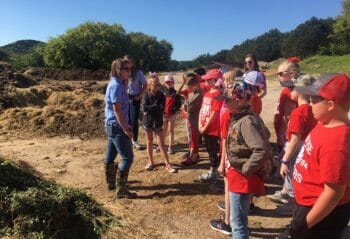 “Thanks to Jennifer for setting it up with Candace, who is very easy to work with,” he said. “She is very familiar with us and Fossil Rim, which really helps.”

The education department wants Glen Rose ISD, and local citizens in general, to always keep them in mind for opportunities going forward.

“We hope all of the kids remember that we are in their community and can be a resource for them, as well as for their teachers,” Morgan said. “For people in Glen Rose, we can be part of their lives on a more frequent basis. We hope the students learned about biodiversity, sustainability, and that we are working for these animals, doing so with the help of other institutions around the world.”

This was the first Glen Rose third grade event for Arledge, and she values the relationship with schools, both near and far.

“I am so impressed with how the teachers incorporate Fossil Rim into their curriculum during the year, instead of viewing us as just a source of entertainment for their students,” Arledge said. “That’s really where we want to go from an education standpoint. We hope that the students are proud to live in a place so close to this amazing facility, because we couldn’t do all that we do without the support of the Glen Rose community. And, it makes me excited to know that Glen Rose’s future is in good hands after seeing such smart, engaged, and self-assured third graders.”