Fossil Rim Wildlife Center is excited to announce the birth of its fourth giraffe calf in 2017. The male calf was born on July 28 at approximately 7:30 p.m. and the mother is “Jan Bussey.” This female was formerly “Kenya” at the Dallas Zoo, and has live at Fossil Rim since spring 2016. The name change was made to honor Fossil Rim’s longtime employee and volunteer, Jan Bussey, who passed away last month.

With the birth of this calf, the Fossil Rim tower (giraffe group) total now stands at 11.

“We’ve been keeping a very close eye on the new calf and mom, since this is Jan Bussey’s first calf at nine years old,” said Molly Shea, Fossil Rim giraffe caretaker. “She’s a very observant mom in how she’s keeping a close eye on her calf, as well as their busy surroundings.”

Fossil Rim’s other 2017 giraffe calves are “Opal” – born Jan. 13; “Demetrius” – born March 6; and “Minka” – born May 14. All calves were sired by Fossil Rim’s eight-year-old bull “Mosi,” who arrived from the El Paso Zoo in April 2014. He was chosen to come to Fossil Rim by the Giraffe Species Survival Plan (SSP).

“Genetically, he was the best male to breed with our adult females: ‘Jurz,’ ‘Nettie,’ ‘Snorgie,’ and Jan Bussey,” Shea said. “It’s been awhile since we’ve had such a young herd and it has been an interesting – and cute – experience to watch them. The adults tend to be on their toes quite often, trying to keep an eye on all of the various offspring. Not only is the herd of various heights ranging from 15 feet to six feet, but they also have vastly different personalities that span from standoffish and nervous to curious and bold. 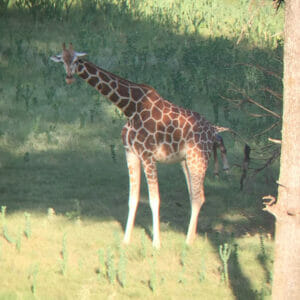 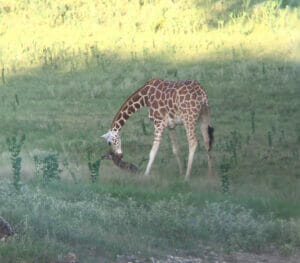 “The calves seem to mirror the personalities of their mothers. Since Jan Bussey, and now her calf, are still relatively new to Fossil Rim, it will be interesting to watch them grow into the herd together. The tower is doing great, and hopefully we will have a name to announce for our newest addition soon.”

All Fossil Rim giraffes live in the Game Preserve pasture, which is directly below the wildlife center’s Overlook Café. 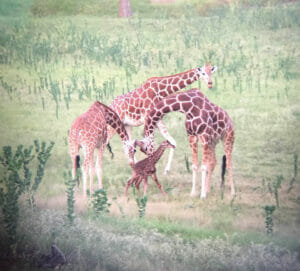 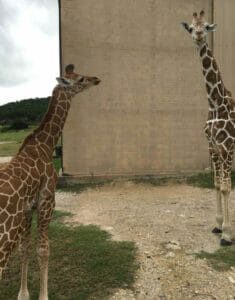 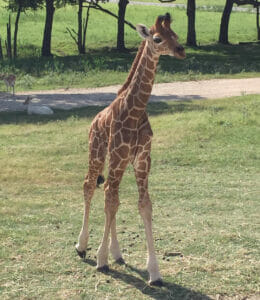 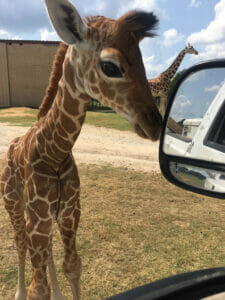 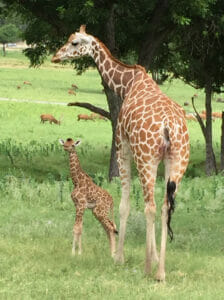