Wild turkeys are the largest North American game bird with a wingspan of up to six feet.

There are six subspecies of wild turkeys in the United States with the Rio Grande subspecies being the primary one found in Texas.

Wild turkeys have long legs, wide and rounded tails, and a small head on a long, slim neck. The red fleshy lobe hanging from their chin is called a "wattle." Their feathers have an iridescent quality, looking brown from afar but shining with blues and reds in certain light.

Mature male turkeys, also called toms, sport a “beard” consisting of a tuft of black filamentous feathers protruding from their breast. Females, also known as hens, are smaller than the males and have less impressive plumage. Young male turkeys are called jakes and have shorter tail feathers and a shorter beard than the adult males.

Turkeys have excellent eyesight with a wide field of vision, but limited depth perception. They usually prefer to run rather than fly from danger and can run about 25 mph. However, they are capable of short-distance flight with a maximum speed of 55 mph.

Wild turkey’s spend the early morning and late afternoon foraging before frequently flying into trees to roost at night. In early spring, males gather in clearings to perform courtship displays. They puff up their body feathers, flare their tails into a vertical fan, and strut slowly while giving a characteristic gobbling call. The male's gobbling, which can be heard up to a mile away, is a key part of his bid to attract a mate.

When you visit Fossil Rim, you'll likely come across our large group of turkeys, fighting for a snack from guests. Despite their presence here, wild turkeys were not placed here as part of any plan. Instead, the turkeys in this area were either already living on property when fences were built, or found their way here and decided to stay. Though we still care for them, they can leave whenever they want. They’re a great example of the unique ecosystem we’ve formed here, with exotic species living and thriving alongside Texas natives.

As a native species that can fly over the fences, the wild turkeys could be anywhere.

VIEWING TIPS
Turkeys can fly fast for short distances, but they prefer to run and will sometimes run to your vehicle for food at Fossil Rim. 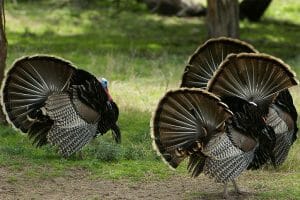 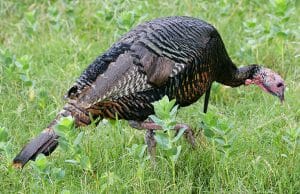 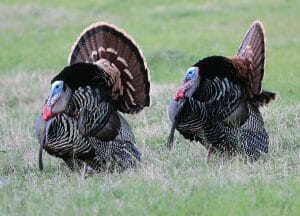