White-tailed deer are a common North American species, seen everywhere from countrysides to city suburbs. “White-tailed” refers to the white underside of the species’ tail, which is held erect like a flag when the animal is alarmed or running. They are the smallest members of the North American deer family, only reaching around 150 pounds at their peak winter weight. White-tailed deer are brown in color, with lighter undersides and ears. They have a large, black nose and slender legs made for running and jumping. Males have a set of antlers which fall off and regrow every year. These antlers grow in size as the deer grow older, sometimes reaching up to 25 inches across.

In the heat of summer, white-tailed deer typically inhabit fields and meadows using clumps of broad-leaved and coniferous forests for shade. During the winter, they generally keep to forests, preferring coniferous stands that provide shelter from the harsh elements.

While they occasionally venture out in the daylight hours, white-tailed deer are primarily nocturnal or crepuscular, browsing mainly at dawn and dusk.

Large-antlered bucks, with their intimidating racks, mate more frequently. During the mating season, also called the "rut," bucks fight over territory by using their antlers in sparring matches. The antlers are shed in late winter every year and are chewed on by other animals for their high calcium content.

White-tailed deer have good eyesight and acute hearing, but depend mainly on their sense of smell to detect danger. They have numerous scent glands on their legs for intraspecies communication, and secretions become especially strong during the rut.

White-tailed deer use speed and agility to outrun predators, sprinting up to 30 miles per hour and leaping as high as 10 feet and as far as 30 feet in a single bound.

White-tailed deer are more numerous in modern times than they were prior to the European colonization of North America. In precolonial times, they were prey for wolves and mountain lions. Native Americans also hunted white-tailed deer year-round, keeping their numbers down. Today, populations have boomed to the point of overpopulation, and in some areas these deer are considered pests.

Regular hunting seasons are one modern method of keeping population numbers down, though many states assess local population health before setting limits. Other areas have invested in non-lethal methods of population control, such as contraceptive injections and sterilization.

These deer are a native volunteer species, meaning we didn't put them here. If you do spot one, it will most likely be in the first or third pasture you enter.

VIEWING TIPS
White-tailed deer are very skittish, and may even run across a road to escape detection. Remember to drive slowly to avoid a mishap. 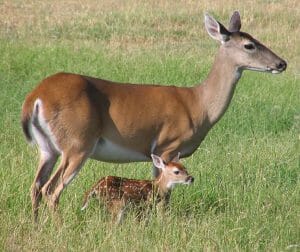 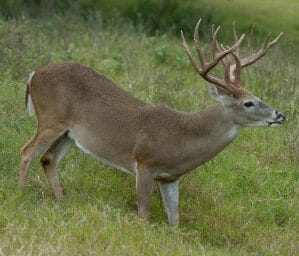 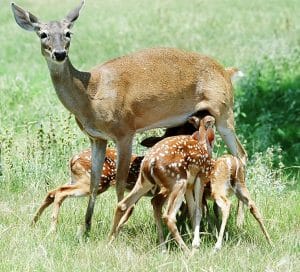