Axis deer are a common sight here at Fossil Rim, as well as across the whole of Texas. Originally brought from overseas to Hawaii, and later to Texas to serve as captive game, enough of these deer managed to escape and breed to form hearty wild populations.

There are many who believe the Axis deer is the most beautiful of all the deer species in the world, thanks to their deep orange coats that remain mottled with white spots throughout their life. A stripe of darker fur can be seen running along their spine, while their ears, inner legs and throat are all white. Although smaller females and young males may be mistaken for the fawns of white-tailed deer, Axis deer are typically taller and longer.  Males grow two large, three-pointed antlers that can reach 30 inches high.

The Axis deer prefer to live in territories with woody vegetation for cover and open areas for feeding. They are naturally less nocturnal than most deer, usually feeding after sunrise and resting near streams during the midday heat, and then feeding again a few hours before sunset.

Breeding can occur year round and an Axis deer can give birth twice in one year, which isn't the case for native Texas deer.

It can be challenging to tell the difference between an Axis and Fallow deer. The Axis deer’s coat will always be a deep orange, while the fallow can come in many different colors. The spots on the Axis are also more pronounced than on the Fallow. If you are able to get a good look at their face, the Axis deer has a more slender and pointed nose than the Fallow. Mature Axis are also known for their unique “unibrow,” a stripe of dark fur that sits above their eyes.

Axis deer live in the third pasture you enter. They are often found further back in the pasture, so they might be one of the last species you encounter.

VIEWING TIPS
Note that axis deer have spots that separate them from white-tailed deer, and are typically stouter than fallow. Males have a distinct "unibrow" look, and both males and females are always a rusty red color with white spots. 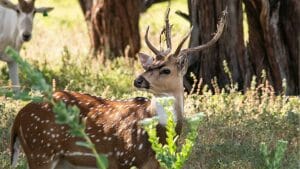 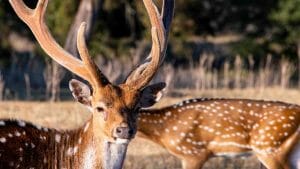 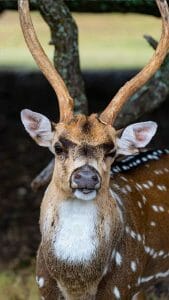 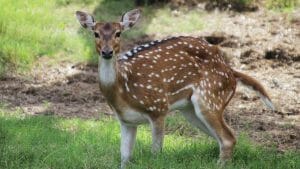 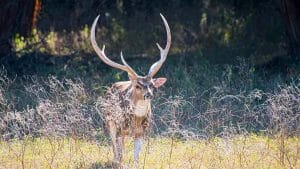