The coloration of fallow deer is highly diverse, with up to 14 variations occurring from white through shades of reddish to dark brown. Some adults retain their original spotted markings as they grow, while others are completely solid. Whatever color they are when they're born will be the color they retain for life.

The rump of the fallow deer is white, and when alarmed the hairs on the rump stand erect and the tail is held high, revealing a white flash that warns other deer of the threat.

Bucks carry palmated antlers that are the largest among Old World deer and the largest relative to their body size. The antlers are broad, flattened at the ends, and have a number of short tines. They are the only Old World deer with flat antlers.

When threatened, the frightened fallow deer will run from predators by using a form of stiff-legged jumping and running called "stotting." Once in the woods, they can use their varied coat colors effectively as camouflage.

Fallow deer do much of their feeding in open, grassy areas but require tree cover and undergrowth for shelter. Food availability appears to determine whether individuals in an area are predominantly grazers or browsers. When possible, they feed mainly on herbs and foliage and sometimes on woody browse and grasses.

Even in their native eastern Mediterranean countries, fallow deer are rare as “wild” animals. Most herds are semi-domesticated, which makes this species the most widely kept of the world’s deer. They are so widely kept in fact, that the species has been introduced to all inhabited continents. Humans have historically had close ties to the fallow, with some historians even referring to them as a living legacy of the roman empire. This is because conquering armies from Rome would travel far and wide with a herd of fallow deer to act as a consistent food source. Inevitably, some of these deer ended up staying put where they were led, becoming a herd for a new people group.

Fallow Deer live in both the third and fourth pastures you enter. Because of their large population at Fossil Rim, you are very likely to see fallow deer.

VIEWING TIPS
These deer are easy to identify compared to other deer at Fossil Rim because of their palmate antlers – a shape similar to that of a hand with the fingers extended. 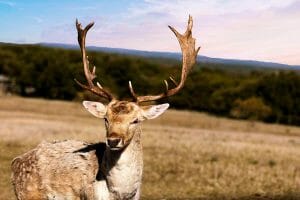 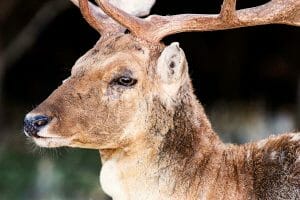 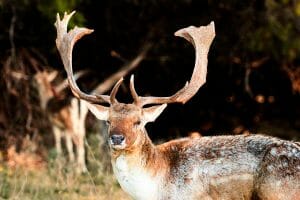 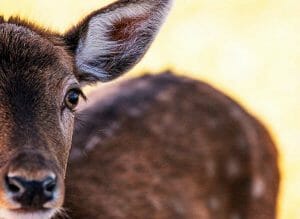 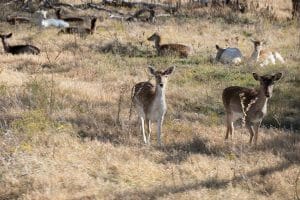