When you tour at Fossil Rim, you’ll likely hear one of our Guides refer to Texas as the “new Africa.” This title is meant to draw upon the similarities between the two climates that allow antelope and other species to thrive. That being said, Africa is not a monolith, and it certainly hasn’t been replaced by one state across the world. Instead, when we call Texas the new Africa, we’re referring to how Texas can play a role in the conservation of some of its most vulnerable species.

Is There an Old Africa?

The title “new Africa” comes with some implications, mainly that there is an “old Africa.” Obviously, that’s not the case. Africa is a thriving continent made up of dozens of unique countries and cultures. Unfortunately, African countries are also home to a swath of endangered and vulnerable species. 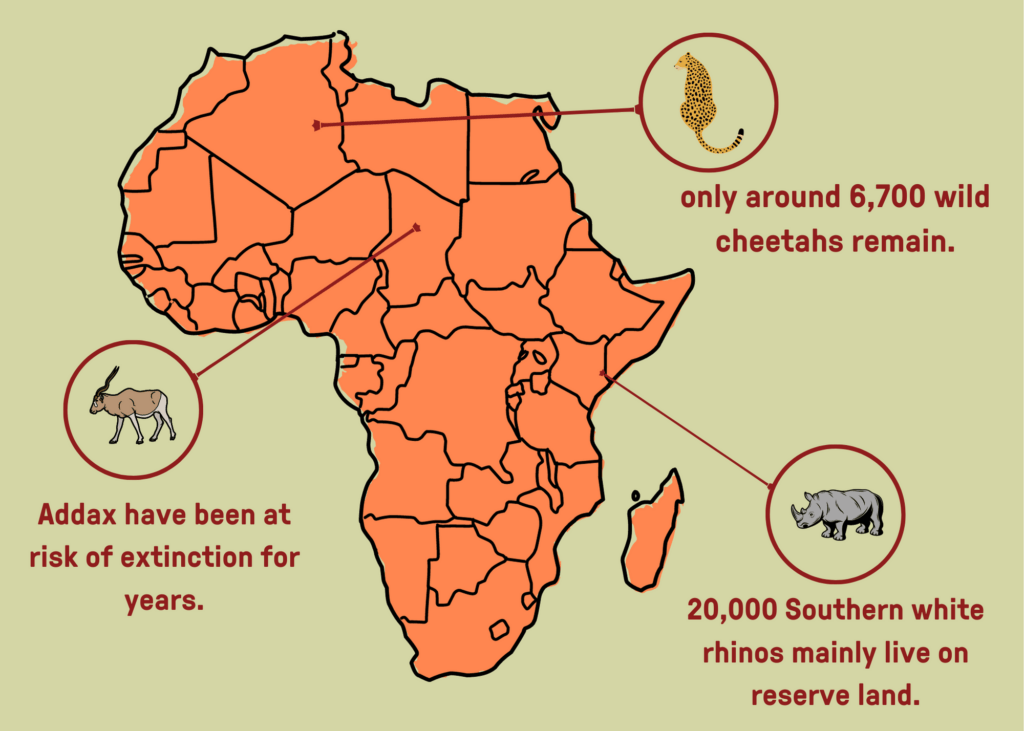 The reasons for their statuses vary from climate change to human impact, neither of which are slowing. This puts many countries at risk of losing their species diversity, as well as entire ecosystems. We see this with antelope like the scimitar-horned oryx, which used to roam through countries like Tunisia, Niger, and Sudan. Sadly, years of development in these countries resulted in the species’ extinction in the wild.

In Africa, many governments and local conservation bodies have developed methods to stop poaching and educate citizens. Still, the struggle for space between communities, human conflicts and the far-reaching effects of climate change have created a lot of obstacles. Couple this with the fact that some species went extinct in the wild before conservation efforts ever reached them, and researchers have had to get creative. That’s where Texas comes in.

In some ways, the title “new Africa ” reflects more on Texas, as we’ve only recently discovered our similarities. In the past, Texas was nothing more than open land and scattered ranches home to imported animals. Some Texans imported exotic species to show wealth, while others were interested in hunting wild game without international travel. It soon became apparent that many African species were able to thrive in the Texas climate. The many landscapes of Texas mirror several African countries, making it an ideal location to raise species and educate conservationists. Zoological facilities and conservation groups like Fossil Rim soon became vital to the survival of foreign species.

Since the 1970s, conservation groups in North America have been able to contribute individual animals back to their native countries. Not only this, but generations of experts have been able to share their knowledge with colleagues across the globe.

The Heart of Conservation

Fossil Rim is at its heart a conservation breeding facility. Within that, we care for a variety of species from herbivores to carnivores. Our niche, however, lies in hoofstock— animals like antelope, deer and even giraffe and rhino. We’ve spent years learning how to care for these animals in new ways and are always working toward building their wild numbers back up. The landscape here, from wooded ashe juniper groves to open fields and limestone cliffs, provides a familiar habitat to these African species. This allows us to observe them in a way simply not possible in other areas.

Our knowledge of hoofstock, particularly desert hoofstock, has led us around the world. Just this past March of 2022, two of our staff members traveled to Chad to assist some partner organizations in the transportation of delicate dama gazelle and other antelope. We intend to uphold the high honor of being referred to as the “new Africa,” not by replacing the incredible continent, but instead by aiding in the restoration and conservation of its species in any way we can.