The sable antelope gets its name from the Russian word for “black,” though only the males of the species are truly black. Female and young sable are a rich chestnut color with white facial markings, as well as a white belly and rump. Males look much the same, though their brown coat is replaced with a glossy black beginning around three years of age.

Both males and females boast impressive ringed horns that rise vertically and curve backward. When they arch their necks and stand with their heads held high and tails outstretched, they resemble horses.

Sable antelope are known for their ability to defend themselves from predators like lions. By using their horns and sharp, pointed hooves, they can gravely wound both predators and other sable. Female sable are especially aggressive and, as a result, there is a female hierarchy system based on seniority.

When the entire herd is at rest, it’s not uncommon to see each individual animal facing a different direction. By doing this, the herd is able to keep an eye out for danger at all angles. Additionally, should danger appear, the herd will tighten, forming a “ring of steel” around calves and supporting each other in defense.

Why Can’t You Feed the Sable at Fossil Rim?

When you visit Fossil Rim, you will be told that all animals can be fed besides our sable antelope. Due to their aggressive nature, as well as their impressive and unavoidable horns, we ask that guests refrain from encouraging this species to approach their vehicle. Luckily, our herd does not take much interest in guests, and can instead be viewed from a safe distance in our Main Pasture.

Sable live in the third pasture you enter. They share some similar characteristics to roan, which live in the next pasture, so keep that in mind for an interesting comparison.

VIEWING TIPS
Sable are the one antelope species that we ask you do not feed pellets to. They can be very aggressive, so it is best for your safety to just observe them. 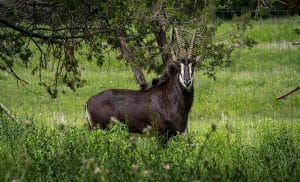 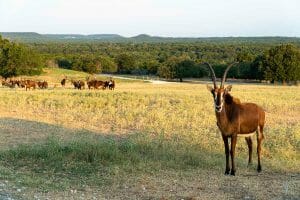 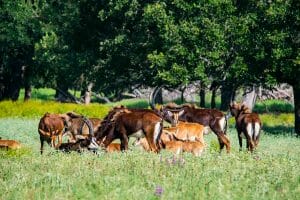