Roan are the fourth largest antelope species in the world, with adults able to reach as much as 500 pounds. Both male and female roan have dusty brown hair, backwards-facing horns and black “face masks.” The masks of male antelope are typically much darker and wider than females’. The ears on this species are large starting from birth, often giving adolescents an oversized look. Finally, they have large, powerful bodies and slender legs that are perfect for running.

Like most large antelope, roan are generally gregarious and territorial. Females occupy a home range encompassing the territories of several males, who live solitary lives when not breeding or in bachelor herds.

Roan can have violent tempers. When two adult males encounter each other, it is common for them to fight for dominance of their herd. They brandish their horns, run forward, and drop to their knees while clashing their large horns together. Renowned for their strength and aggressive defense of their herds and calves, roan in the wild will even take on lions.

Roan are one of several antelope species that maintain a female-dominant hierarchy, even when a male is present. The oldest females in a herd have the highest rank, and all female calves born to a group will stay with that group throughout life. If a herd gets too large to be maintained, some individuals may split from the main family to create a new one.

Dominance is displayed in this species through frequent, low-intensity aggression. Displays of strength and minor fights between individuals are common, though if necessary two roan are able to inflict considerable damage to each other.

Roan live in the first and fourth pastures you enter, and are the largest antelope in their pastures.

VIEWING TIPS
Roan will likely not approach your car for pellets, but if you drive slowly they will tolerate a close up viewing. 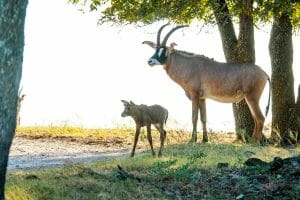 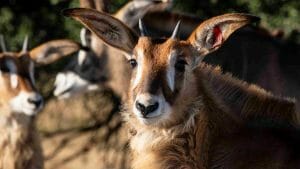 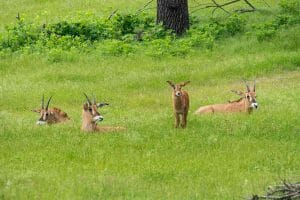