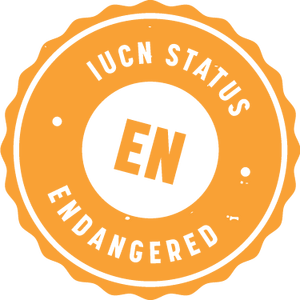 The Przewalski’s ( pronounced shuh-VOLL-skis) horse is often called "the last true wild horse" and is the only ancestor of the domestic horse alive today. However, they themselves are descended from a truly ancient horse species called Botai horses, found in Northern Kazakhstan 5,500 years ago. With a short, muscular body, Przewalski’s horses are smaller than most domesticated horses. Their hair is a muddy brown color that is typically lighter the closer it gets to their underbelly. Their legs and nose are a darker brown that mirrors the color of their tail and short, erect mane.

Prezewalski’s horses, commonly shortened to “P-horses,” are very social animals and are known to be affectionate to others in their herd. It is not uncommon to see P-horses grooming each other, an activity that not only keeps the horses clean, but reinforces their social bonds.

This species is specifically built to withstand extreme temperatures and landscapes. Native to Asia, P-horses natural habitat encompasses rocky expanses of the Gobi desert, as well as the steppes of Mongolia. Temperatures here can range from over 100 degrees in the summer to well below freezing in the winter.

Herds of Prezewalski’s are typically made up of several females, a single dominant male, and any offspring they may have. Once young males are old enough to breed, they are chased off by their family to form bachelor herds.

After the last ice age, the habitat of the P-horse began to shrink due to climate change. As their semi-arid, treeless habitat gave way to forests, the horses were pushed into smaller ranges.

Though they once ranged throughout Europe and Asia, this habitat loss as well as competition with man led to the horse permanently moving east. In the early 20th century, the horses’ range shrank even further, as farmers and their livestock began to monopolize good grazing lands.

The Przewalski’s horse seen today in zoos in North America and Europe is descended from those remaining 12 founders. Luckily, the Asian Wild Horse Species Survival Plan has become a nationwide effort in America to study and revitalize this species, working with zoos to maximize genetic diversity of the horse’s population and minimize inbreeding. Reintroduction efforts are also underway in China, Kazakhstan, and Mongolia. As of 2020, the wild population was estimated to have grown to around 2,000 individuals.

These horses live in a private pasture near our vet clinic. 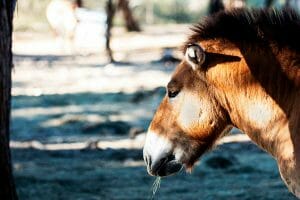 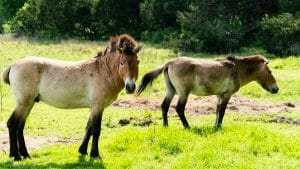 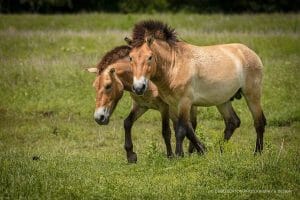 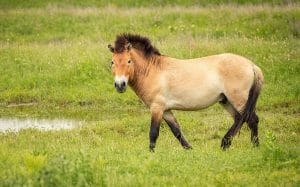