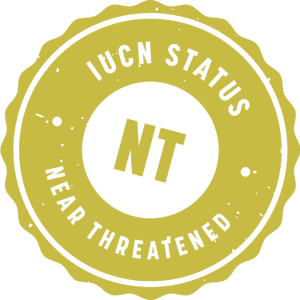 The Mexican Red-Knee Tarantula is one of two virtually indistinguishable species of large spider found in Mexico. Ranging from mountains to coastal landscapes, they are a fairly common species and a popular choice for collectors. Named for their distinctive orange-red leg spots, these tarantulas are easy to identify against the colors of their natural basin and rainforest habitats.

Mexican Red-Knee tarantulas are named for the distinctive orange-red spots in the center of their legs. They also feature a red ring on the center of their carapace. The rest of their body is a deep brown to black color featuring red-tinged hairs that can be dislodged in order to irritate the eyes and nose of would-be predators.

They are a large spider, averaging around two inches in body length, with legs that are even longer. Of their eight legs, the fourth is the largest, measuring between 2.5 and three inches depending on sex.

Like other tarantula species, the Mexican Red-knee needs to molt in order to compensate for the growth of its body. Molting not only adjusts for their size as they grow but can help heal wounds, replace missing body parts and strengthen their outer shell. Molting occurs frequently when the arthropod is young and slows as they mature. Before the process begins, they will begin to move slower and eat less in order to conserve energy. Molting can leave the spider quite vulnerable, as their body and fangs are soft after the initial shedding and do not harden for several weeks. In captivity, a tarantula should not be handled before or immediately following a molt, as the movement can harm them.

There are actually two spiders that are commonly referred to as the Mexican Red-knee tarantula. For many years, there was no distinction between these two species, and it wasn't until 1997 that the differences were discovered. While the common eye will most likely not be able to tell the two apart, there are very slight differences in body length and patterning that researchers can use to identify them. In 2017, DNA barcoding was used to confirm that the Mexican Red-knee was actually two tarantulas. According to the results, despite their similar appearance, there is significant genetic differences between the two.

Our Mexican Red-knee tarantula lives in the Children's Animal Center.

VIEWING TIPS
Our spider can be seen behind the glass on the left side of the CAC. If you can't see her at first, look inside the log that sits in her enclosure.