The greater roadrunner is a type of ground cuckoo native to Texas. It’s easily spotted by its black-and-white mottled feather pattern, stout legs, and distinctive head crest. Although it can fly short distances, greater roadrunners are usually spotted on the ground, leaning their head forward and tucking their wings as they walk or run. Their feet possess two forward-facing toes and two backward-facing toes – a characteristic of cuckoos – and its tail is held at an upward angle.

A number of adaptations make the roadrunner well-suited to its desert environment. It eats mostly meat, which provides it with moisture and decreases the need for fresh water. It reabsorbs water from its feces before excretion and uses a gland in the nasal system to eliminate excess salt, which is done through the urinary tract in most birds.

During the heat of the day, a roadrunner will reduce their activity by 50 percent and at night they will lower their body temperature. At sunrise, roadrunners expose a dark patch of skin found between their wings so they can get back to their regular temperature by absorbing the sun’s warmth.

The greater roadrunner’s characteristic speed helps it not only evade predators, but also hunt. Its quick reflexes mean it can even successfully catch fast moving venomous snakes without being bitten. Greater roadrunners are able to eat these and other poisonous and venomous prey like scorpions without suffering any ill effects.

Greater roadrunners are native to the American Southwest, and have been living alongside indigenous people for thousands of years. Because of this, they are a common figure in the art and culture of several tribes. The same can be said for their relatives overseas, as cuckoos come up in stories and historic documents from ancient Rome, India, Japan, and Central America.

Roadrunners are a wild species that voluntarily live at Fossil Rim. They're elusive, but can be seen in any of the pastures.

VIEWING TIPS
Roadrunners are smaller than you might expect, and very quick. Keep an eye out for movement in the brush along roadsides. 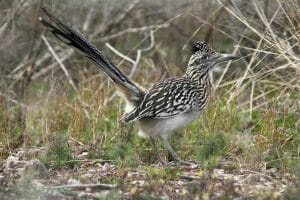 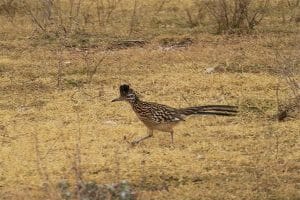 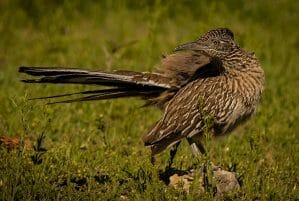