As one of the largest antelope at Fossil Rim, greater kudu can be easily recognized by their muscular, humped backs. Though the sexes look somewhat similar, this species is sexually dimorphic, meaning that the males and females have different characteristics. Male greater kudu have thick, spiraled horns that can reach six feet in length, as well as an abundant fringe of hair from their chin down their neck. Females lack both the horns and the fringe. Both sexes have 6-10 vertical white stripes on their sides, a white chevron between the eyes and three white spots on the cheek below the eye. They also have exceptionally large pink ears, which give them excellent hearing.

Greater kudu are browsers, which means that they can eat a variety of available shrubs, roots, and more. Due to the arid nature of their habitat, they can exist for long periods without drinking, obtaining sufficient moisture from their food. However, they become water dependent at times when the vegetation is very dry.

A greater kudu is more likely to flee or attempt to sneak away from a dangerous scenario than fight. They will almost always take an opportunity to camouflage themselves rather than go on the offensive. If they must run, however, they will first give a loud, sharp alarm bark. This gruff bark is one of the loudest sounds made by any antelope.

Greater kudu are known for their incredible jumping ability. They are so skilled at leaping that fences need to be over eight feet high to contain them. They are normally active in early morning and evening, but become nocturnal in developed areas.

In the animal kingdom, especially in herds and family groups, hierarchy is everything. Males will often compete with each other to determine who gets access to certain resources. Despite this, greater kudu are one of the few species that rarely fight, and can even tolerate more than one dominant individual. Instead of battling, a male kudu will usually perform a simple display to compare his size to his opponent. The larger male will usually win without any bloodshed. Occasionally, two mature males will even live within a single herd, cohabitating peacefully.

Kudu live in the second pasture you enter. Take a look for them immediately off to your right or over by the feeders.

VIEWING TIPS
Kudu feel very comfortable within the cover of trees. When you don’t see them initially, take a close look in the direction of the woods. 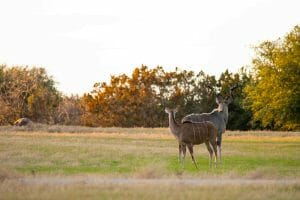 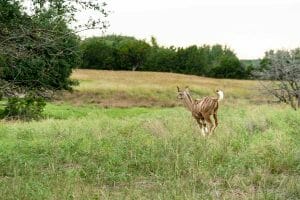 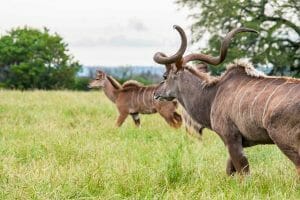