The gemsbok is the largest and best known of the four species of oryx, or straight-horned antelope. Although they are sometimes referred to simply as the African Oryx, Gemsbok are not the only oryx in Africa.

Gemsbok are known for their muscular bodies and long, horse-like tail. The majority of their coats are light brown to gray, with darker markings on their face and underbelly. In contrast, the area around their eyes and legs is a brighter white, giving them the appearance of wearing masks and socks. With their impressive 33 inch horns, predator attacks typically target young gemsbok to avoid risk of puncture wounds.

Calves look very little like their parents. They are a brownish tan color to help them blend in with their surroundings before their horns are large enough to offer protection.

Gemsbok are incredibly well adapted to harsh desert conditions, capable of surviving in waterless wastelands where many animals would perish. It is second only to the addax in this regard. If they cannot find a source of fresh water by the time they need to drink, their kidneys have adapted to filter brackish water and still allow for hydration. When subjected to hot weather, their body temperature rises for several hours until they are able to lose this excess heat through radiation. When deprived of water, the species doesn’t sweat, thus saving it from dehydrating.

Gemsbok are highly nomadic in the desert, but if they come across a watering hole or a good supply of water-bearing vegetation, herds may remain year-round.

Although Gemsbok are not considered an endangered species, there are still many protections in place to help ensure that the population remains stable. They are a popular target of poachers and trophy hunters due to their large horns and unique coloring. The species also has a considerable impact on their desert environment due to their nomadic lifestyle. With this in mind, protecting Gemsbok is important to the health and balance of the overall ecosystem.

Gemsbok live in the third pasture you enter. They tend to roam out in the open either in their herd or alone.

VIEWING TIPS
Gemsbok are one of three oryx species at Fossil Rim. As you encounter each one, check out their horns in comparison to the other two. 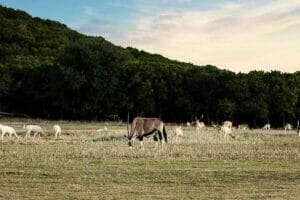 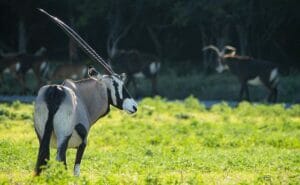 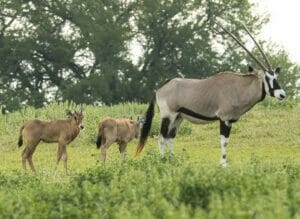 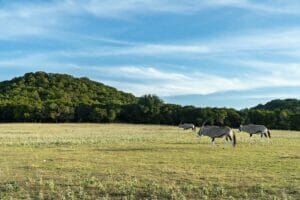 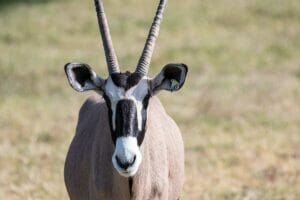 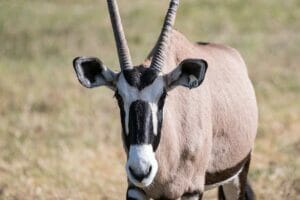