The emu is the world’s second-tallest flightless bird, second only to the ostrich. Its wings are tiny at less than eight inches long, giving emus the appearance of having no wings at all. The feathers on an emu have a characteristic shaggy look thanks to their two shafts, with barbs so widely spaced that they do not interlock. These feathers are a grayish-brown to black color, and cover the whole body except for the legs and neck, which are bare-skinned. The skin of an emu has a bluish tint, contrasting with their striking amber eyes.

Emu chicks look nothing like their parents. Instead of a coat of shaggy feathers, chicks are are fuzzier, pale in color and have dark vertical stripes running down their back for camouflage.

Emus are incredibly fast runners, built for the open plains of the Australian Outback. Despite the arid reputation of their natural habitat, emus love and will seek out water sources, not only to drink but to wallow and swim in. Adult emus will even encourage chicks to join them in the water.

Emus can often be heard making rumbling, rattling or booming sounds that may sound like a car engine idling. This sound is used for communication, and can be heard over a mile away.

Emus are monogamous and their courtship is prolonged. Once a mate has been chosen, the female will lay several eggs in a nest made on trampled ground, before leaving the male to incubate and watch over the chicks. During incubation, which can last around 56 days, the male doesn't eat, drink, or defecate. Once the male starts sitting, most females leave the territory, sometimes pairing with other males and laying further clutches. The male incubating the eggs is the case for most large, flightless birds.

These birds live in the second pasture you enter and also at the Children’s Animal Center. For the emus in the pasture, there is an excellent chance they will approach your vehicle on the road.

VIEWING TIPS
You will notice that even though emus are quite inquisitive and will not hesitate to approach you, it pales in comparison to the intrusiveness of an ostrich being right in your face. 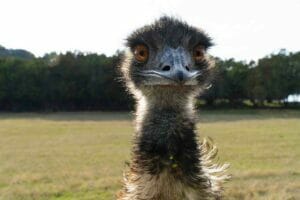 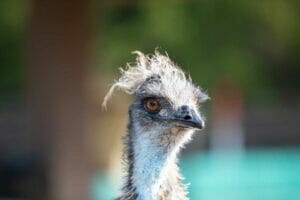