The common wildebeest, also referred to as the blue wildebeest, is a member of the antelope family. However, its heavy build and disproportionately large forequarters make it look more like a relative of a cow. Wildebeest have large heads with high eyes and a rounded bridge. A mane of long, dark hair runs along their neck and shoulders, contrasting with the rest of their silvery-gray hair. In the right light, this short, striped hair can even appear blue, hence their name.

The common wildebeest is the largest subspecies of wildebeest, in addition to being an important keystone species in southeastern Africa. Their annual migration of about 1,800 miles results in the tilling, pruning and fertilization of immense stretches of land. Through this, wildebeest help sustain plant life for prey species while they themselves provide food to carnivores in the regions they pass through. This migration is considered one of the greatest wildlife spectacles on Earth, involving up to 1.5 million wildebeests, as well as hundreds of thousands of other animals.

With their blunt muzzle and wide row of incisor teeth, wildebeest are able to feed efficiently on dense, short grasses that carpet plains in the semi-arid zone of Africa during the rainy season. Being water-dependent and ever in search of green grass, they migrate when the rains end and spend the dry season roaming the acacia savanna, where there is water, taller grass that stays green longer, and flushes of new grass that come up after fires or local thunderstorms.

Wildebeest herds have adapted to constant predation by birthing each season's calves all within a three week period. Although females will only nurse their own calf, the sheer number of calves and females help the young survive.

Although wildebeest are listed as a species of least concern by IUCN, they are still protected by many organizations due to their importance to the health of African ecosystems as a whole. Without a healthy population of wildebeest, hundreds of other species of flora and fauna could face collapse.

Wildebeest live in first pasture you enter. They will generally be found toward the front, but may occasionally venture toward the back boundary.

VIEWING TIPS
If you don't see wildebeest out in the open, be sure to scan the tree line for members of the herd taking shelter. 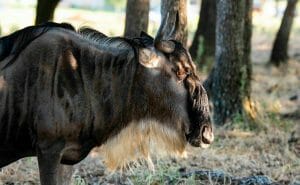 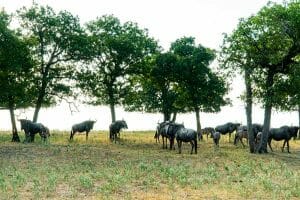 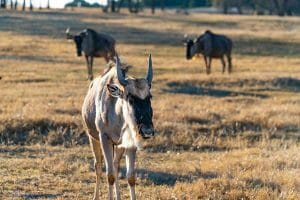 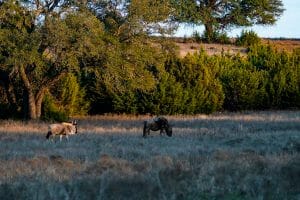 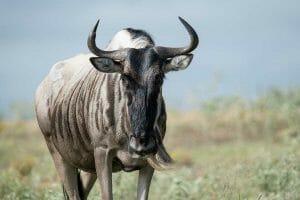 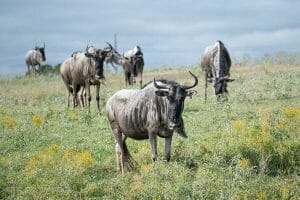 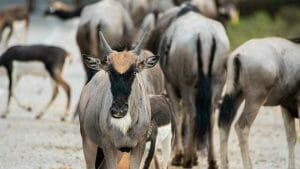