The color of waterbuck varies from grizzled gray to reddish-brown. Their ears are lined with white fur that also sits above their eyes, around their nose and mouth and on their throat. Their most distinctive trait, however, is the white ring on their rump. While both sexes look very similar, only males have impressive forward-curving horns that are prominently ringed.

Waterbuck, as their name suggests, inhabit areas that are close to water in savanna grasslands and forests. Such habitats not only provide year-round sustenance, but long grasses and watery places in which to hide from predators. Due to their reliance on water, these antelope must drink daily and always have a water source within their territory. They are good swimmers that readily wade into water and can, if needed, seek refuge from predators in deeper water.

Oil glands located in the animal’s skin are responsible for their distinctive musky odor, but also  produce waterproofing and insect-repelling effects. Their smell, as well as their oily fur has helped perpetuate the myth that lions and other predators do not hunt and eat this species. This isn’t true, as large predators will still hunt waterbuck, albeit typically as a last resort.

When exposed to a high level of human activity, they will become almost completely nocturnal, only entering grazing areas after sunset. This is a good example of how man not only affects the habitat of animals, but can also alter their normal behavior on a daily basis.

Waterbuck, along with other species like the Nile Lechwe, are sometimes referred to as aquatic antelope. Despite this title, they do not spend their days in water, but rather need to live near it to survive. You will often find the waterbuck at Fossil Rim resting near a pond, or even near the road on rainy days.

Waterbuck live in the third pasture you enter. They are quite likely to be in the back portion of the pasture and might be one of the last species you encounter.

VIEWING TIPS
Waterbuck are one of the most water-dependent species at Fossil Rim. If you get close to pond, which is more likely on a guided tour, keep an eye out for waterbuck. 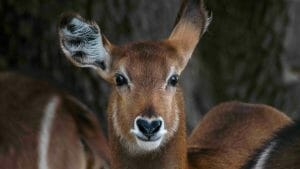 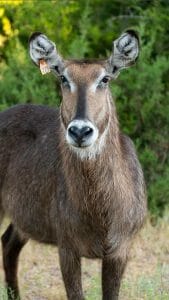 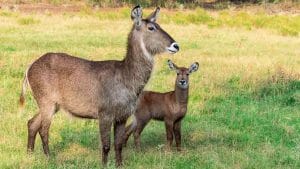 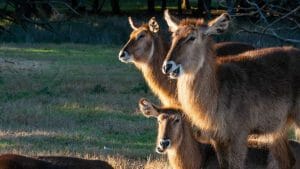 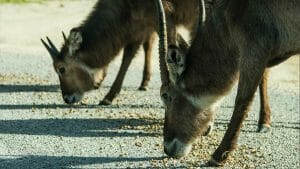