The black-tailed jackrabbit is the third largest of the six jackrabbit species. They’re easily identified by their distinctive large ears, peppered coat, and white underbelly. Their ears are tinged with the same black as their namesake tail, which is fully black and creates a stripe-like effect up their spine.

Black-tailed jackrabbits are a common American desert species, and are able to live in shrublands and other open spaces, as well as urban areas including farms. They’re able to eat spiny flora such as cactus that grow in these areas, and utilize the tough vegetation to keep their constantly growing incisors filed down.

They will spend the hottest part of a summer’s day in a shallow depression under the shade, as well as allowing their large, thin ears to lose heat cool down. During the winter, they will seek shelter in taller grass to protect them from the chilling winds.

Black-tailed jackrabbit’s eyes are located on the sides of their heads to allow them to see in all directions. This is mostly to detect movement rather than to get a sharp image. Their sense of hearing and eyesight are quite developed, so observers will normally see their eyes and ears in near-constant motion, always checking out activity in their environment. This is because hares seem to be one of the most ideal food sources on the planet.

They are fast animals, capable of running 40 miles per hour in short bursts. Those long back legs can propel them more than three feet in the air with leaps of more than 10 feet.

Despite its name, the black-tailed jackrabbit is actually a hare. Rabbits are typically much smaller than hares, with shorter legs and ears and a much stockier frame. Hares have long, powerful back legs and thin bodies that allow them to run rather than hide. They are much better suited to habitats without thick vegetation, and don’t burrow underground like rabbits.

These jackrabbits are a native species and might be seen in any pasture.

VIEWING TIPS
There are plenty of jackrabbits at Fossil Rim, but this is not a species you are feeding pellets to, so they will not necessarily be close to the road. 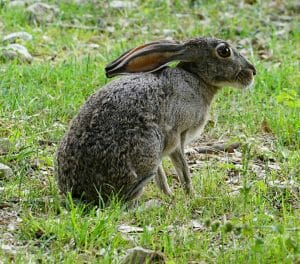 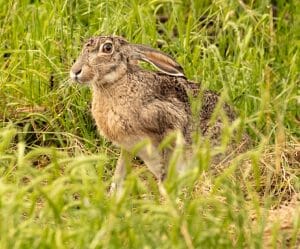 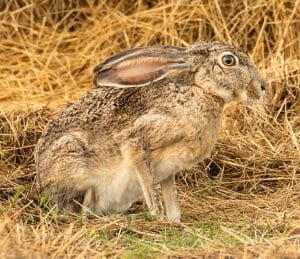