The Arabian oryx is one of four species of wild oryx, and one of three species here at Fossil Rim. Although they were classified as “extinct in the wild” in 1972, they were reintroduced in Oman a decade later. This along with several other reintroductions helped their status move from extinct to endangered in 1986, and “vulnerable” in 2011.

The Arabian oryx is a short antelope with a bright white coat and striking black markings on its face and legs. Their coat helps reflect the sun’s intense heat in the summer and catch its warmth in the winter. They have broad hooves meant to help them endure long walks on loose gravel and sand, and long,  lance-like horns that can be used for self-defense.

These antelopes are well adapted to life in a desert, capable of thriving in environments with little water and high, hot winds. Like many other desert mammals, Arabian oryx can go for a long time without drinking water, and can instead stay hydrated by eating grasses, herbs, roots, bulbs and even melons. They tend to eat these plants at night when their moisture content is highest, and have also been known to lick condensation off of rocks and vegetation after heavy fog.

In 2011, the international union for the conservation of nature was able to reclassify the Arabian oryx as vulnerable thanks to successful re-release programs in countries like Saudi Arabia, Israel, the United Arab Emirates and Jordan. These days there are more than 6,000 wild oryx living in semi-captivity on protected lands to keep them safe from poaching.

Arabian Oryx live in the fourth pasture you enter. They are often seen off to the right as you head up “Cheetah Hill,” as well as in the flat portion of the pasture near the Giraffe Barn.

VIEWING TIPS
Arabian oryx will generally be seen in wide-open areas of the pasture. They are the brightest-white shade among all antelope at Fossil Rim, so they usually stand out. 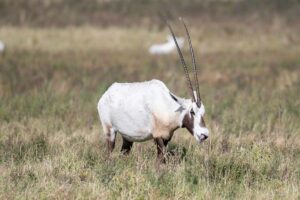 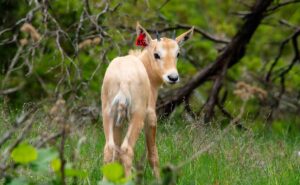 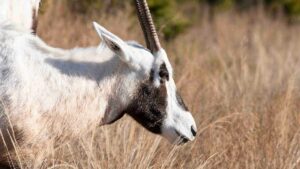 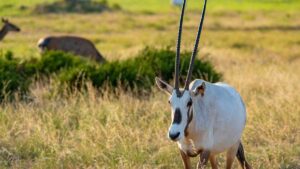 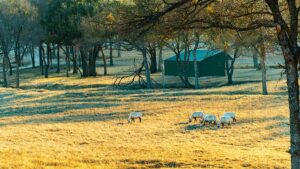 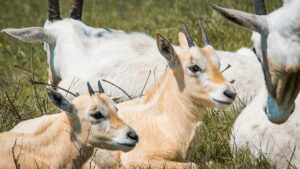