European red deer are closely related to American elk, but are smaller in size. They are easy to identify thanks to their reddish-brown shaggy hair and very large size. Female red deer have a face and throat that are paler than those of the males, particularly in summer. Unlike the other deer species at Fossil Rim, adult red deer are hardly ever seen with spots.

A distinguishing feature of red deer stags are their impressive antlers, which in mature adults are long and branched. Some sets get so big that they can weigh up to eleven pounds!

These deer are social animals, meaning that they live in summer herds with up to 400 individuals. The herds are matriarchal, being dominated by a single female. Seasonal migrations occur, where deer move to higher elevations for the summer, then back to lower elevations over winter. In spring, the sexes separate after the mating season, females leaving to give birth, bulls forming separate summer herds.

The rutting season takes place from the first of September to the middle of October, during which time there are fierce fights between the males. A male will “bugle” during the rut; this mating call is also a warning for other males to stay away from his harem. This unique song can be heard over a half-mile away. After mating season, he sheds his antlers and joins a male herd.

European red deer have existed since at least the end of the last Ice Age. Prehistoric remains of ancient red deer show them to have been considerably larger than their present-day counterparts. In fact, antlers with up to 22 points have been discovered preserved in peat bogs! Although the species kept at Fossil Rim is European, subspecies of red deer can be found around the world, from Australia to Africa and South America. Some of the ancestors of these subspecies made their way to new continents millions of years ago, while others were purposely introduced to be a source of food for humans.

Red deer live in the fourth pasture you enter. They will often be along the road soon after you enter the pasture or near the Giraffe Barn.

VIEWING TIPS
Red deer, especially the males, are very likely to approach your vehicle. They will stick their whole head in your car if you're not careful. 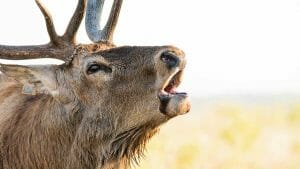 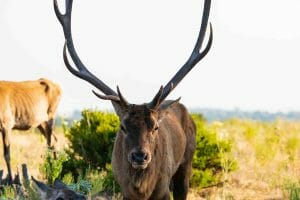 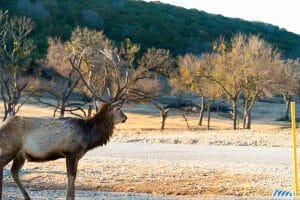 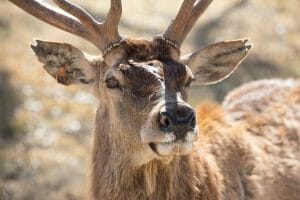