One of the few antelope which exhibits pronounced sexual dimorphism, males and female blackbuck are very distinguishable from one another. When born, all blackbuck are the same dusty tan color, but as they mature, only females retain this look. Males will gradually darken until their coat has become fully black, and will grow spiraled, V-shaped horns up to 29 inches long. Both sexes have white markings that include circular eye patches, mouth, underside, inner legs, and rump patch.

Blackbuck are primarily grazers and prefer open, short grassland, but they can survive in semi-desert areas when there is sufficient vegetation. Regardless of where they choose to live, dominant males will command a territory of 3-40 acres that includes a harem of females and young.

Blackbuck males at Fossil Rim can be seen running wayward females back to the harem and keeping other males away through posturing and the occasional fight. Only territorial males breed.

When alarmed, blackbuck can leap straight up into the air. Depending mainly on eyesight to avoid capture, blackbuck are among the fastest antelope and the only predator they cannot outrun is the cheetah; before 1900, hunters used specially trained Asiatic cheetahs to capture blackbuck. Their main predators now - pariah dogs and jackals - feed mainly on fawns.

Once abundant, blackbuck antelope are now rare outside of game preserves in India. Hunting for meat and trophies, as well as habitat destruction, has severely reduced the numbers of wild blackbuck. Though their populations have stabilized, it is illegal to hunt blackbuck in India. Blackbuck are sometimes referred to as a “Texotic” species, which alludes to its reputation as an exotic game species that has become abundant in wild numbers throughout Texas.

Blackbuck live in the first pasture you visit. You are likely to see them as you enter and exit the park.

VIEWING TIPS
Blackbuck males often stay busy trying to keep their harem of females together, so this can be a very interesting species to stop and watch. 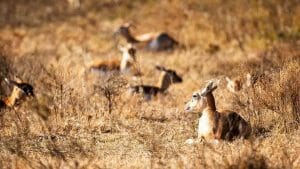 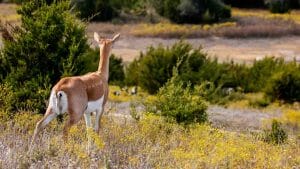 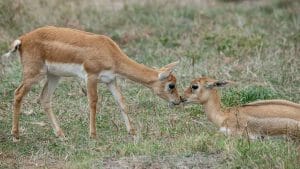 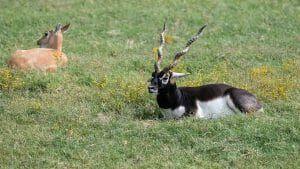 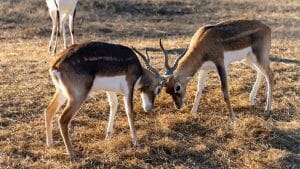