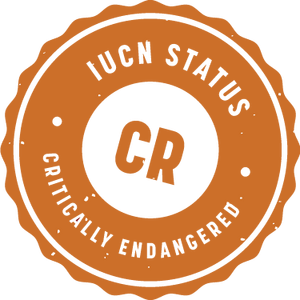 Addax once ranged from the Atlantic to the Nile River on both sides of the Sahara Desert in Africa, but these days there are less than 100 of these antelope in the wild. Uncontrolled hunting, as well as prolonged droughts, habitat disturbance and regional wars have taken a massive toll on the animals' numbers. Addax are classified as critically endangered with a decreasing population trend. What few addax do remain are isolated in small groups  in Niger, Chad, and Mauritania.

In the summer, addax coats will become whiter in order to reflect the sun’s heat, while their dark tan winter coats absorb it. These antelope have short legs, broad hooves and stocky build to help them balance on the ever-shifting desert sands. Males and females both look similar to one another, thanks to their long, corkscrew horns. However, if you’re trying to tell them apart, the females are typically 10-20 pound lighter, with thinner horns than their male counterparts.

No other antelope is quite as adapted to life in the desert as the addax. Their specialized build helps them withstand extremely hot and dry conditions, which makes them well suited to a sweltering summer afternoon at Fossil Rim. In fact, during the heat of Texas summers, they might be one of the only animals that will continue to approach vehicles instead of retreating to the shade.

They are nomadic, following the infrequent rain around their native habitat, and often travel considerable distances in search of food. While many other antelope of North Africa only return to the central Sahara Desert after rainfall has made it bloom, the addax is able to live there year-round.

Wild addax are mostly nocturnal and do a lot of their eating in the evening. Despite living in such a harsh climate, these animals can survive on very little water, obtaining nearly all of it from the plants they eat, as well as dew that collects on desert leaves. They are even able to tolerate a rise in body temperature of nearly 11 degrees before they even need to resort to panting to cool off.

In the mid-1980s, captive-bred addax from the Hanover Zoo in Germany were reintroduced to a park in Tunisia. As a founding member of the Species Survival Plan (SSP)  for addax, Fossil Rim contributed animals in 2007 to the release program and completed extensive behavioral and DNA research projects that should continue to benefit both captive and wild addax.

In January 2020, an addax reintroduction project in Chad led by Sahara Conservation and assisted by two Fossil Rim staff members, got underway. The first 15 addax were released into the wild wearing satellite collars so their movements can be tracked. Those numbers had grown to 50 addax by the end of 2020!

Addax live in the third pasture you enter. They will often be the first species to “greet” you as you enter the pasture.

VIEWING TIPS
Many of the addax are quite social. They are known to be one of the species most interested in feeding from vehicles, so you stand a good chance of seeing addax up-close. 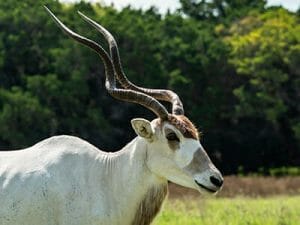 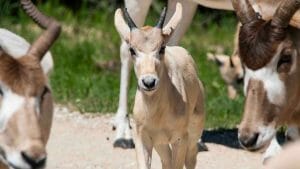 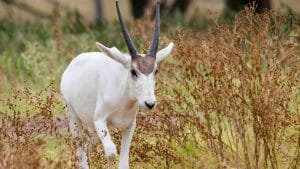 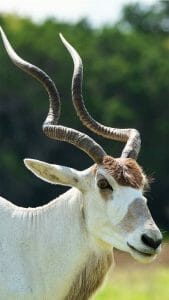 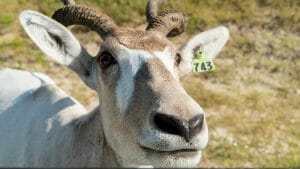