November 8 is World Radiography Day! This marks the anniversary of the discovery of X-radiation by Wilhelm Roentgen in 1895.

X-rays are also known as plain projection radiographs. This diagnostic tool is invaluable to veterinary medicine and is still the primary means used to evaluate structures within the body.  At Fossil Rim, we frequently use X-rays when evaluating our animals. This can range from something as simple as a pregnancy check to something as complicated as a search for evidence of cancer.  The following are a few examples of cases where X-rays have given us the diagnosis we needed to find: 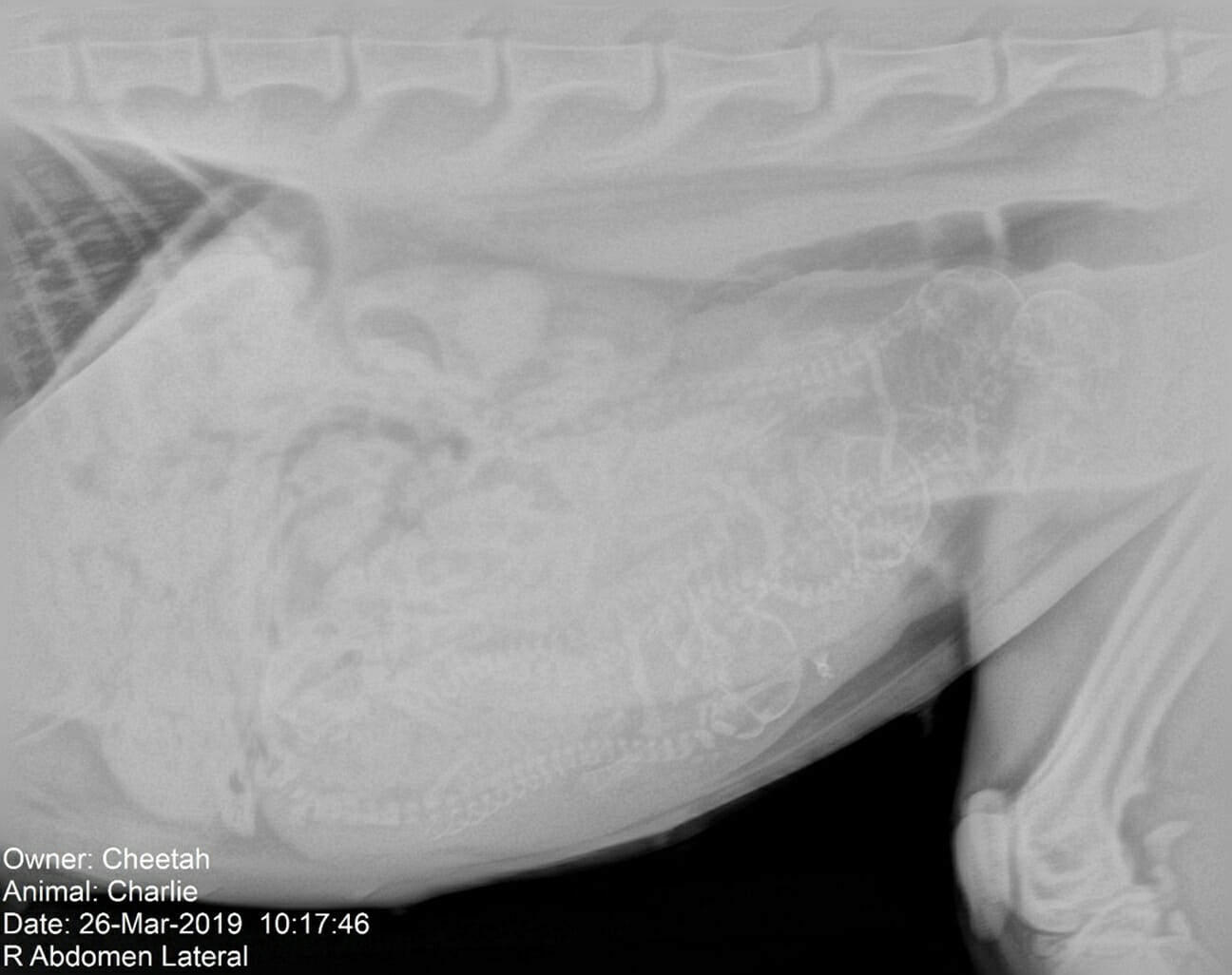 IMAGE 1 (Above) – Knowing the number of cubs that are present during a pregnancy is extremely useful information for our cheetah breeding program. Cheetahs that have only one cub (singleton) are more likely to reject that cub once it is born. On the other end of the spectrum, cheetahs that have very large litters (5-6 cubs) will often have at least one of the cubs that is less well-developed than the others and may require additional care.  Being able to count the number of potential cubs beforehand allows our carnivore staff and veterinary staff to be more prepared for the eventual outcome. The easiest way to do this is to take a voluntary X-ray of the mom. Here is one from a cheetah who was expecting five cubs.  One of the cubs is facing the opposite way and is very hard to see.  Can you count all five skulls? 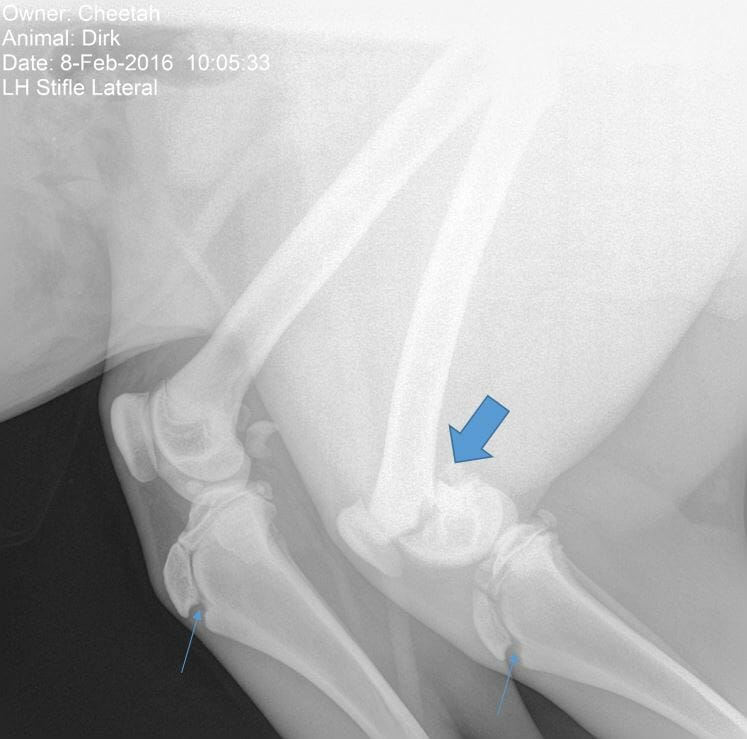 IMAGE 2 (Above) – X-rays are commonly used to look for fractured bones.  But we can also use them to monitor how an animal is healing after a fracture has been repaired.  This X-ray was from a young cheetah that broke his leg. Because this animal was young, he still had open growth plates that you can see (thin arrows). These are present on both limbs and are normal for an animal his age. However, the thick arrow shows a complete fracture across the femur bone where the end of the bone no longer lines up with the shaft. 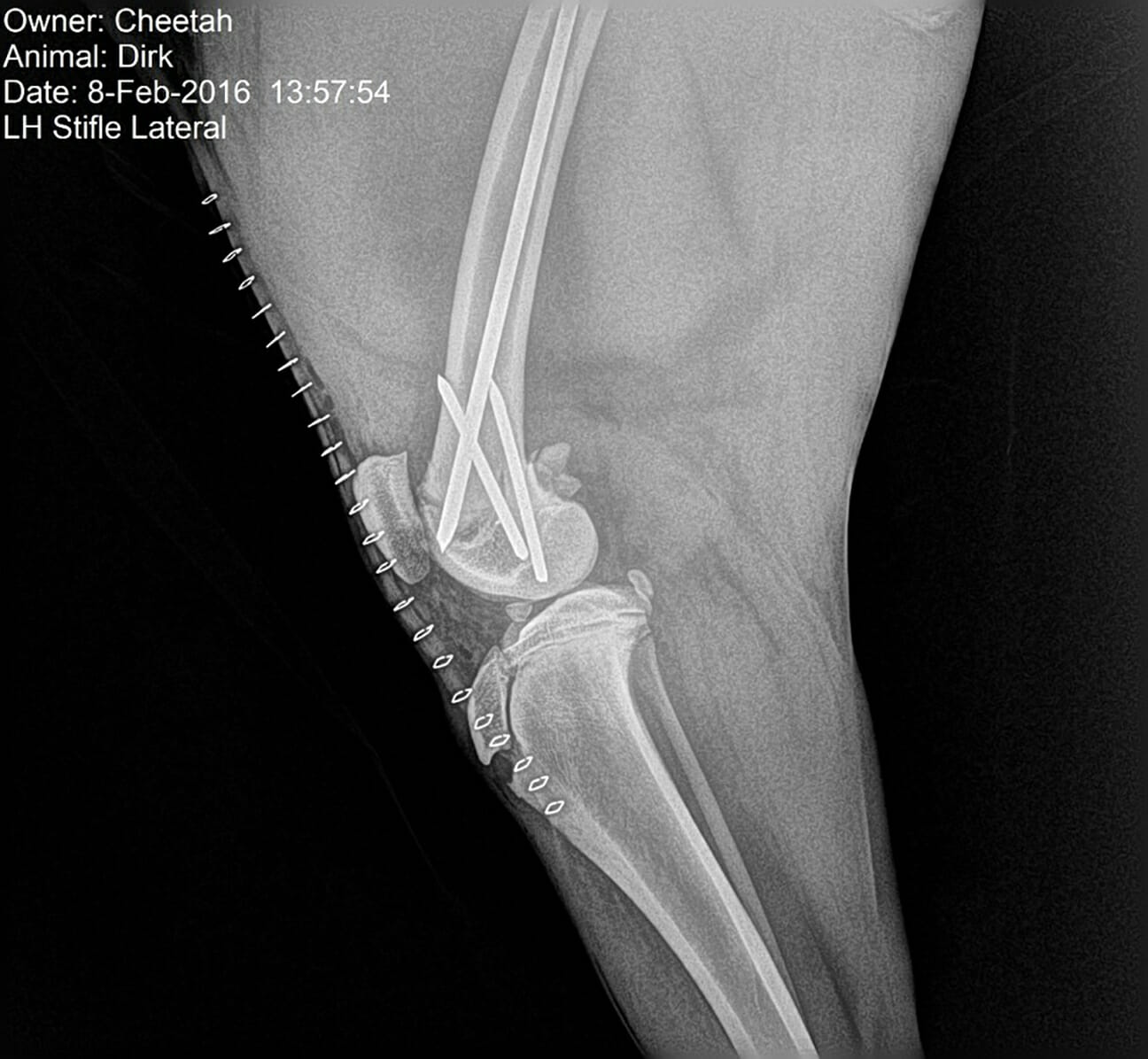 IMAGE 3 (Above) – The animal referenced in the previous paragraph had a surgical repair done on his leg the next day. The fracture was pinned with three metal pins driven through the bone at opposing angles. The skin was then closed using metal staples, which show up nicely on the X-ray. But if you look closely, you can still see the line where the fracture was located. 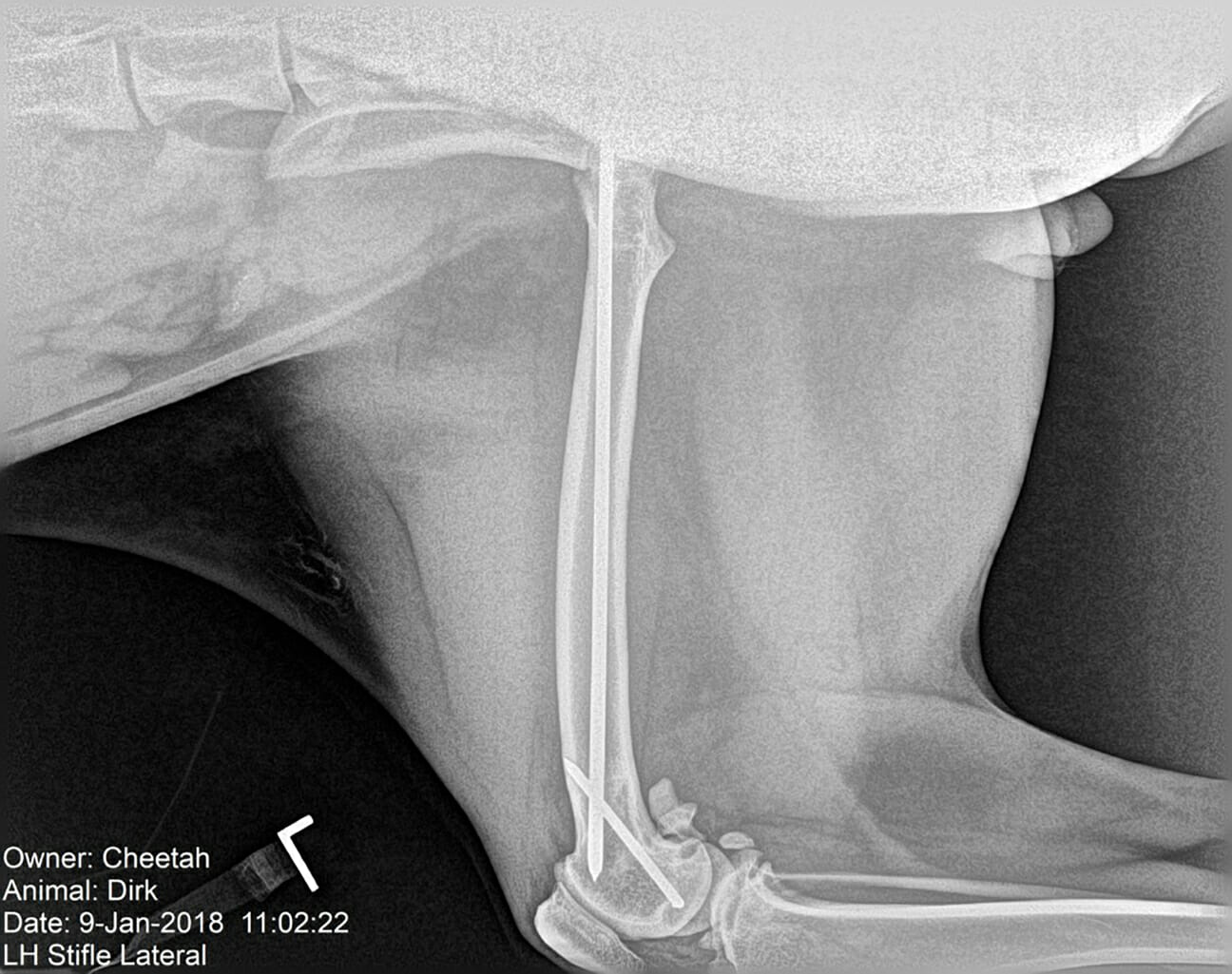 IMAGE 4 (Above) – This follow-up film shows the same animal two years later. The staples have been removed, the fracture line has healed, and there is no longer any break in the bone. You can see that one of the shorter pins is missing, as it had started to migrate towards the joint, which can be a problem.  Therefore, it was removed, but the fracture still healed very well and X-rays were able to confirm that for us.

IMAGE 5 (Above) – Heart disease can be a very bad problem for animals.  Often times, as the heart starts to fail, fluid will build up around the lungs, making it hard for that animal to breathe. When that happens, veterinarians will frequently tap the chest, which means that they will place a needle into the chest cavity and remove as much of the fluid as they can. This makes it much easier for the animal to breathe.  This X-ray is of a healthy coati with no fluid built up around her lungs. The lungs appear as darker areas in the chest on X-rays due to the amount of air that is in them. The white structure in the middle of the lungs is the heart.

IMAGE 6 (Above) – The next X-ray is of the same coati after she developed heart disease. Within the chest cavity, you can see that there is much less air-filled space present. The lungs are compressed by all the fluid that is surrounding them. Since fluid appears the same shade as the heart on X-rays, everything in the chest blends together into whiteness. There is very little space for this animal to breathe like this.

IMAGE 7 (Above) – This X-ray is the same animal after tapping her chest and pulling off some of the fluid. You can tell that the chest still isn’t normal (the amount of darker black space is not as large as it is on the normal X-ray), but there is much more air-filled space than there was on the X-ray from right before the chest tap. In this case, radiography helps us to diagnose the patient, but also to treat her, as it tells us whether or not we are getting a large amount of the fluid out of the chest.

X-rays are still a much-needed diagnostic tool in veterinary medicine despite having been around for so long. In addition to plain projection radiographs, other methods of radiology are being increasingly used in veterinary medicine. These include computed tomography (CT), magnetic resonance imaging (MRI), ultrasound, fluoroscopy, and nuclear medicine to name a few. These methods help us to see what’s going on inside of our patients without causing them any harm. Veterinary medicine would be very difficult to do without radiology.