Mark your calendars for a day of love and romance! In the human world, February 14th can be a time of bliss (or in some cases, a bust). Let’s take a look at some of our native Texas admirers that may be easy on the eyes, but could present some problems if you end up catching feelings.

Toxic date got you down? You might want to stay away from these valentines. Many animals use toxins as a form of defense. A toxin is a type of substance that is used in the process of debilitating a foe. 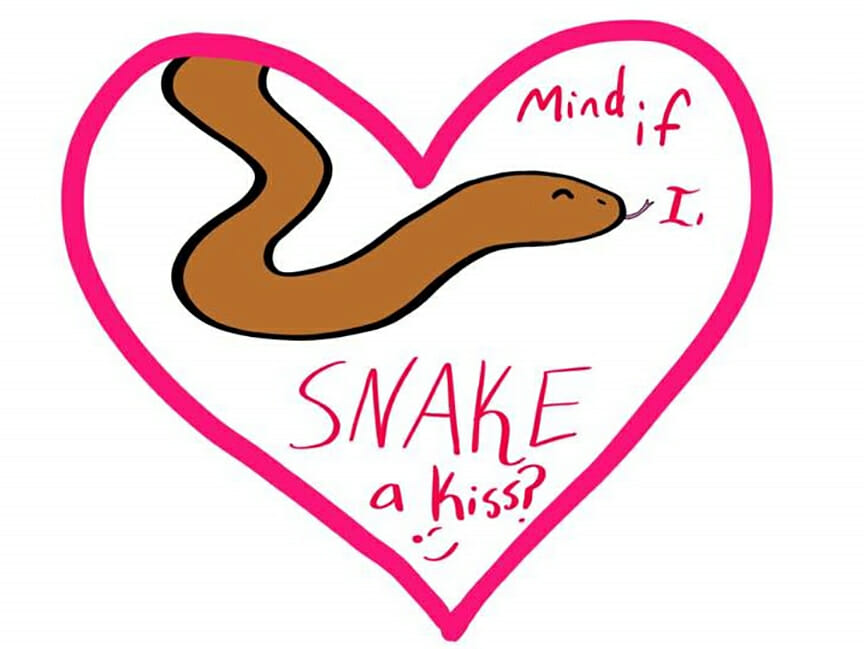 Creatures that utilize toxins are categorized as venomous and poisonous. While many of us think they have similar meanings, they actually describe two different methods where toxins are utilized.

In order to be classified as venomous, the toxin must be injected into a wound. This is normally used by predators.

On the other hand, poisonous animals are those which secrete the toxin through their skin so that when they are touched or eaten, they harm their consumers. This is normally used as a defensive mechanism by prey. It’s a skill to master the next time you’re a damsel in distress.

One of the most well-known toxin users is the snake. Texas is home to approximately 76 different species of snakes, but only 15 percent of those are said to be venomous or dangerous.

Most of the venomous snakes in Texas are classified as pit vipers. Pit vipers, including rattlesnakes, copperheads, and cottonmouths, have an opening – or “pit” – on each side of the head between the eyes and nostrils, as well as venom glands on the sides of their head.

Texas is also home to coral snakes. These animals have alternating colorful rings of yellow, red, and black and are less aggressive than pit vipers, but they have extremely potent venom. This species is often confused with the milk snake, which has a similar pattern.

Just like on Tinder, you should be cautious of features that are sometimes difficult to see from a distance.

Do spiders spin a web of lies…or love? Luckily for us, there are only two venomous spider species in Texas. Brown recluse spiders are known for their “secretive” behaviors, hiding in warm dark environments such as closets, basements, and sometimes even inside your shoes.

They do not intend to bite you, but instead, it is a response to potentially being crushed (maybe from a bad breakup). Though their fangs are too small to puncture through your clothing, they are still one of the most venomous spiders in North America.

The second spider species that is dangerous to love is the black widow spider. They earn the name from the aggression of the female members of the species. They are known to consume the males after mating.

Talk about an unexpected dinner date with a soon-to-be ex-wife. You can recognize these spiders by their jet-black color, plus a red hourglass spot on the underside of the abdomen. Fun fact – their venom is 15 times stronger than the rattlesnake’s! 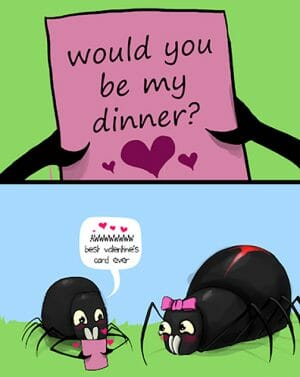 Some other pesty significant buggers include the likes of the red velvet ant. To many, red velvet sounds like a tasty treat, but we can promise you this ant isn’t so sweet.

Despite their name, they are actually toxic wasps. The fuzzy, brightly-colored females lack wings, but have a very potent sting that earned them the nickname “cow killer.”

Another arthropod that is hard to love is the striped bark scorpion. They have seven eyes, all the more to admire you with. Their stinger is found on the end of a long tail that curls around their back.

One could say “their bark is worse than their bite” because they are less harmful than other creatures in this blog post. But beware, if you are allergic to bees, a scorpion sting could be just as deadly. Roses may be pretty, but they also have thorns.

So, how do you know if you have been bitten by the love bug? Some symptoms of these not-so-friendly cuddle bugs may include: stomach cramps, difficulty breathing, fever/chills, and intense convulsions. 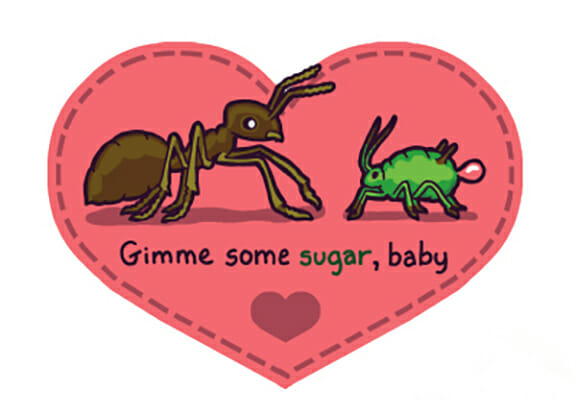 Seek medical attention for these issues and try to note what actually bit you; we don’t suggest blind dates! If you know the species or have a description, write it down.

Stay calm to reduce your heart rate and isolate the wound. Try keeping ice on it to help reduce swelling or any burning sensation.

Even though the toxic animals highlighted in this post could potentially be harmful to humans, we should not eradicate them, because they are crucial members of our ecosystem. So, instead of killing these dangerous sweethearts, maybe just friend zone them!

Without these species, we would lose other biodiverse organisms that you know and love, like birds, mammals of all sizes, and even our crops and agriculture. They are part of the food web, which sustains all life, including ours.

So, now you know. Don’t mess with these Ex’s that live in Texas!