On an “it’s a small world after all” note, a North Carolinian’s American red wolf sculpture replica has found a home within Fossil Rim’s Nature Store.

Dale Weiler created the piece “Just Settling In” after being inspired by an encounter with the critically endangered wolves at North Carolina Zoo in 2018. 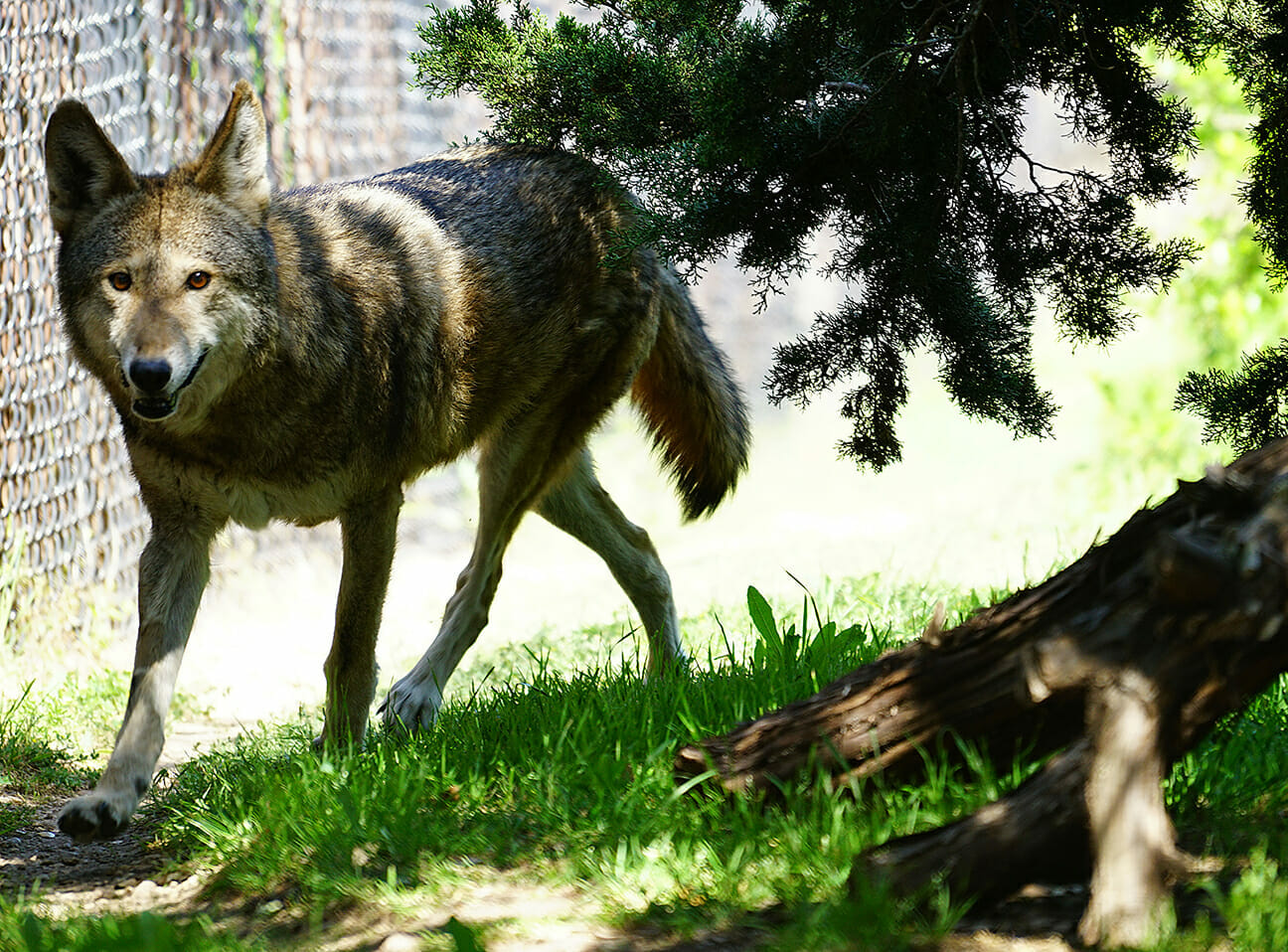 “To see a species for the first time in person is incredibly moving,” Weiler said. “(My wife) Loti (Woods) and I had never heard of red wolves. Then, (North Carolina Zoo Animal Management Supervisor) Chris Lasher explained that they only live wild in our home state and there are only 20 left in the wild, so it was quite a discovery.

“In our case, our first encounter was seeing two newborn pups. When we first saw them, it was love at first sight. I knew I had to capture that emotion in a piece of stone.”

How did the replica find its way to Fossil Rim?

“Dale and Loti are a partner to the Red Wolf SSP (Species Survival Plan),” said Fossil Rim Carnivore Curator Jason Ahistus. “They reached out to Fossil Rim since we are one of the SSP facilities, and we expressed interest in the sculpture. Dale and Loti started conversations with me about the sculpture and our involvement in the SSP and decided to send us a casting.”

North Carolina happens to be the only state where this All-American wolf has roamed the wild in recent years. It used to roam from Texas all the way to Illinois, but has lost more of its historical range (99.7%) than any other large carnivore.

“When you hear that your state represents the last place in the entire world where a species runs wild, you feel pride, a commitment to protect them, and an urgency to keep them from extinction,” Weiler said. “Plus, you’re energized to find additional sites where they can live and flourish.”

Motivated to keep learning more about these wolves, Weiler finds them to be quite interesting.

“They mate for life and are very protective of their families,” he said. “Plus, they are extremely shy. I want everyone to know that the myth is wrong – there has never been a human fatality by a red wolf.

“Also, as a keystone species, they help keep nature in balance. The red wolf is a truly iconic American native.” 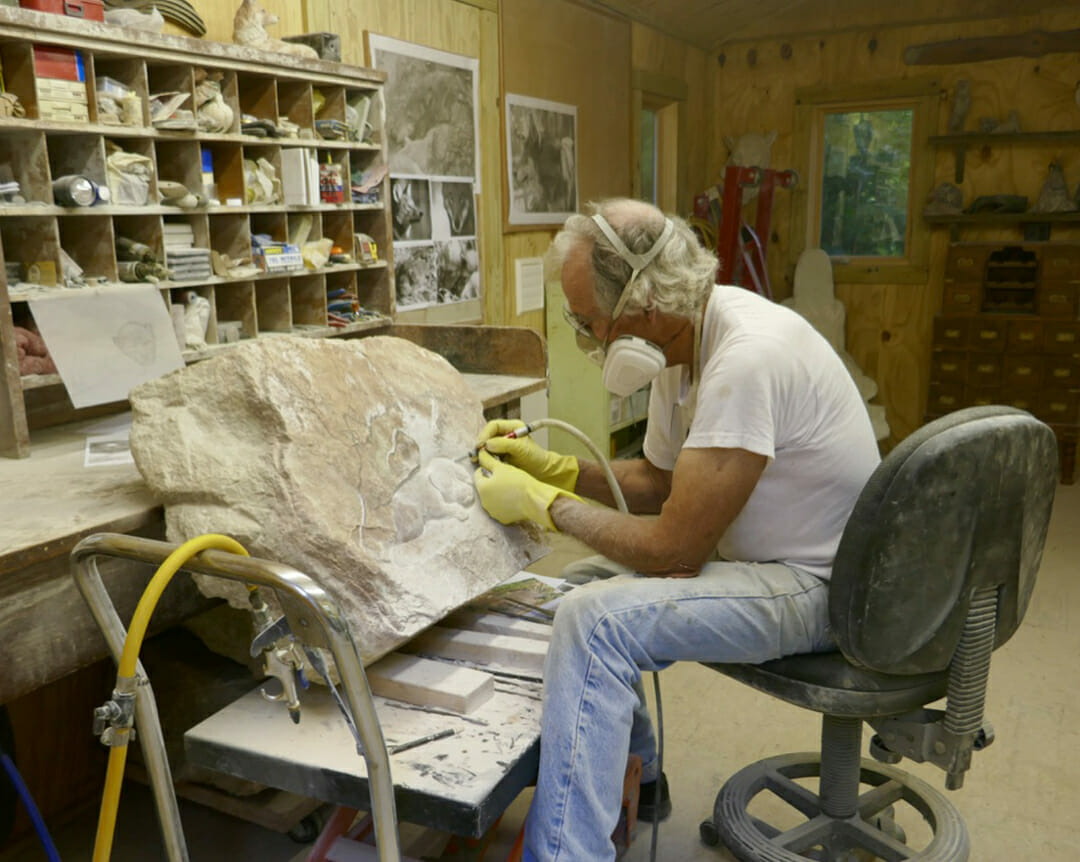 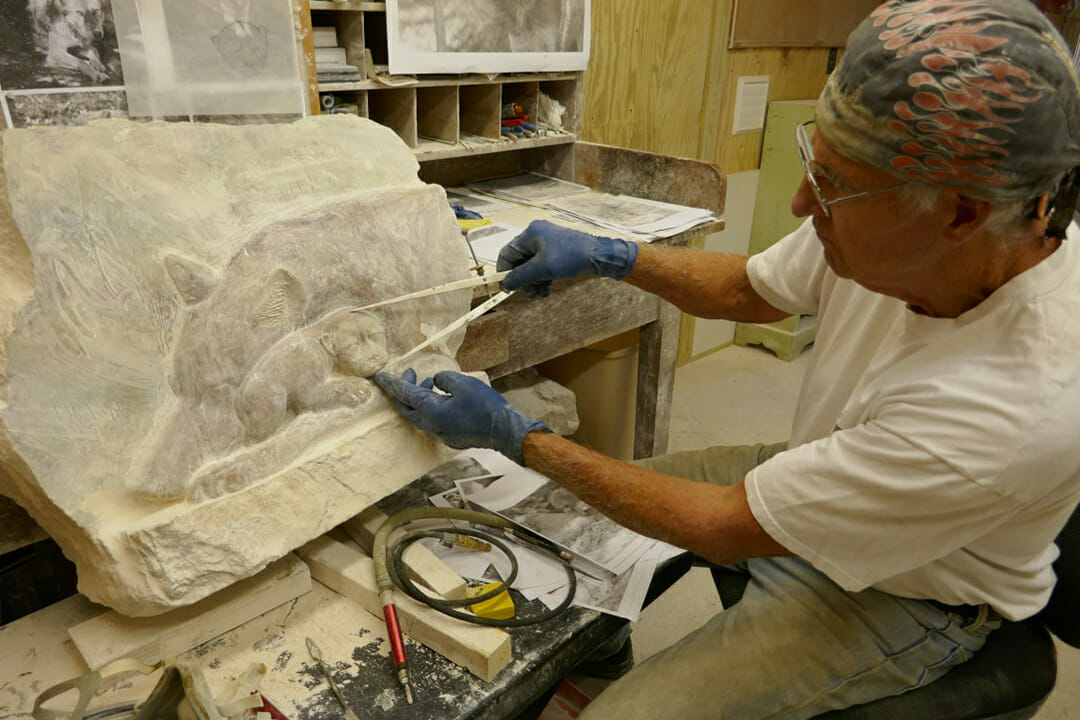 “Utah alabaster offers a broad spectrum of colors and textures to capture the feel and personality of the subject you are sculpting,” Weiler said. “In this case, the stone not only captured the reddish browns of the red wolf, but the greenery of its habitat, as well.”

Weiler set out to create an attention-grabbing piece that would inspire the public to learn more about red wolves.

“The red wolf was a brand-new species to sculpt,” he said. “It’s unique among all canids. To accurately capture the essence of the species, I needed an intimate understanding of its anatomy.

“I spent hundreds of hours looking at photos, asking folks for pictures and videos, and visiting red wolf facilities before I put chisel to stone. Then, it took about four months of work to release the mom and her pup from the stone as a bas-relief.”

Weiler’s sculpting technique is subtractive. That means he removes material in order to progress toward a finished work. Subtractive is the oldest form of sculpture.

“First, I have to see the animal in the stone,” he said. “Then, I carefully and slowly remove the material. I would say I have an emergence style. I like to pull only part of my subject out of the stone and leave the rest for the viewer’s imagination.” 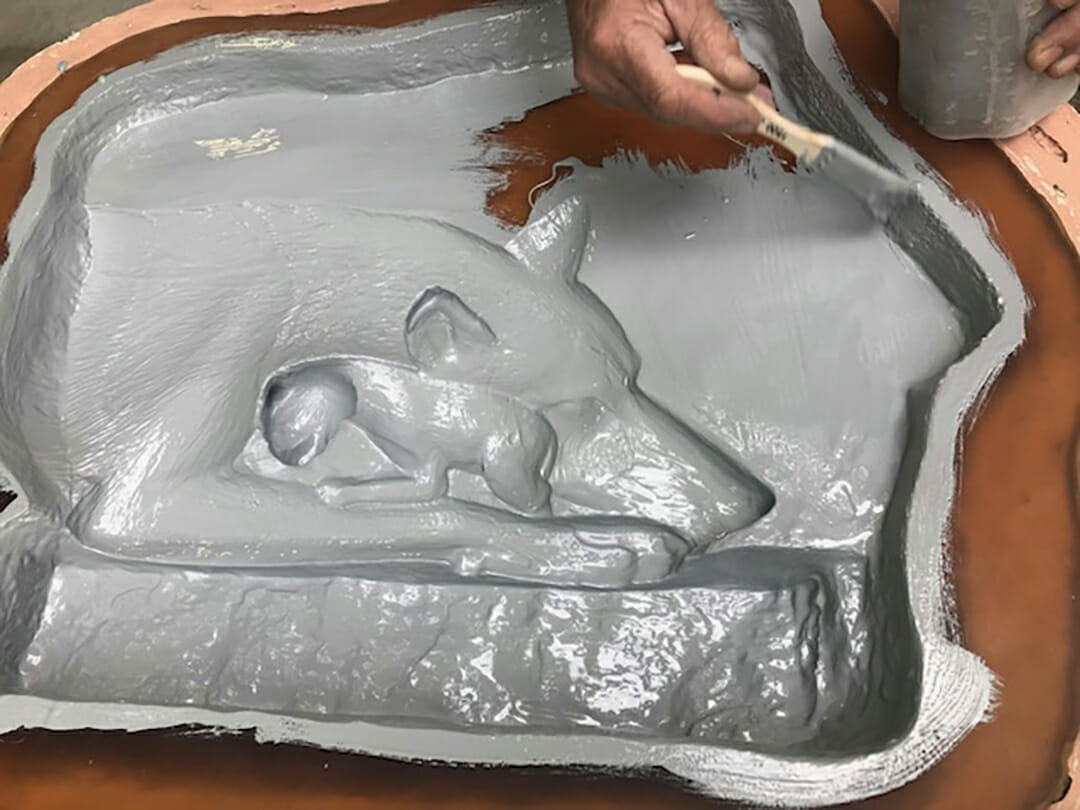 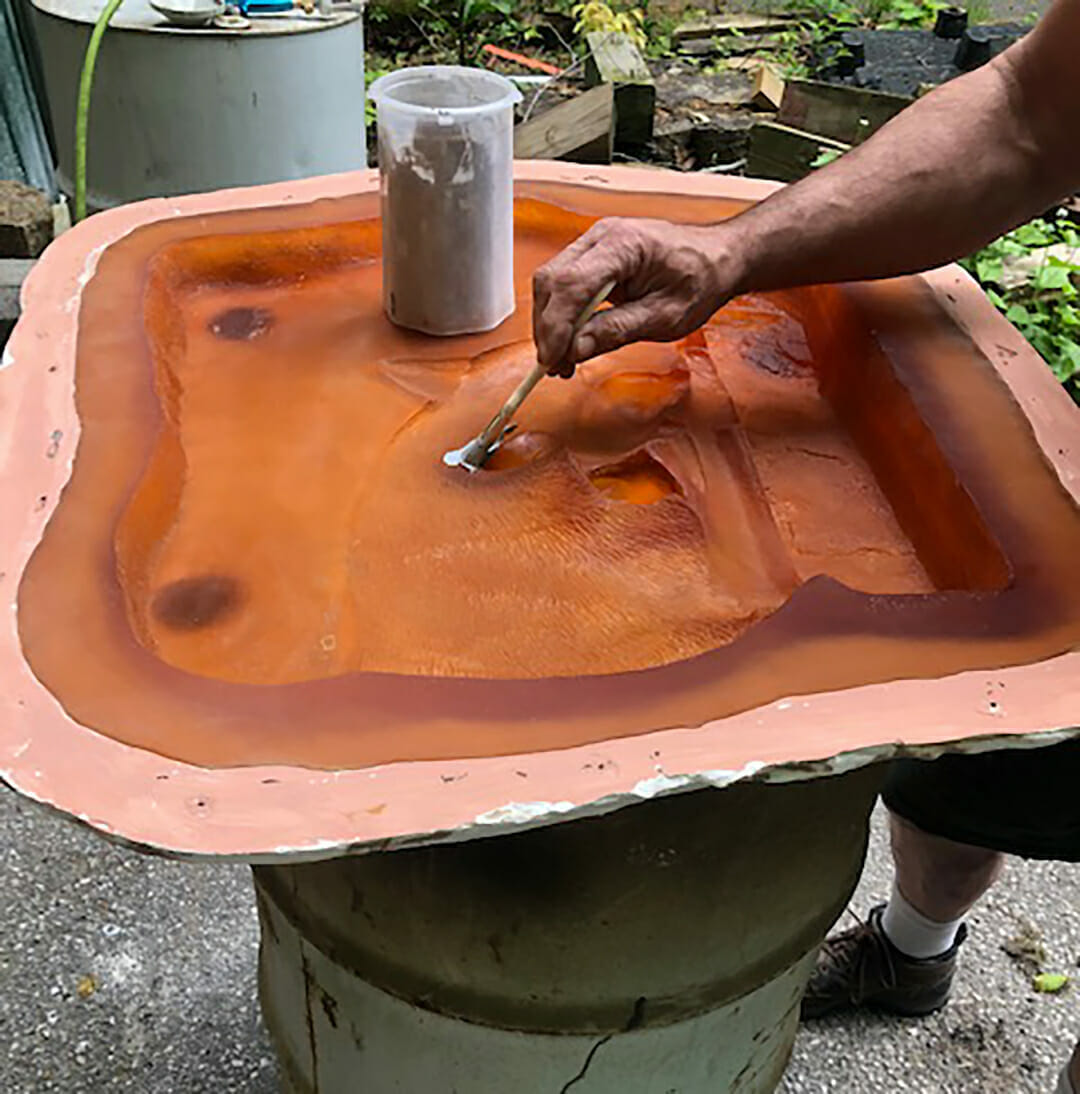 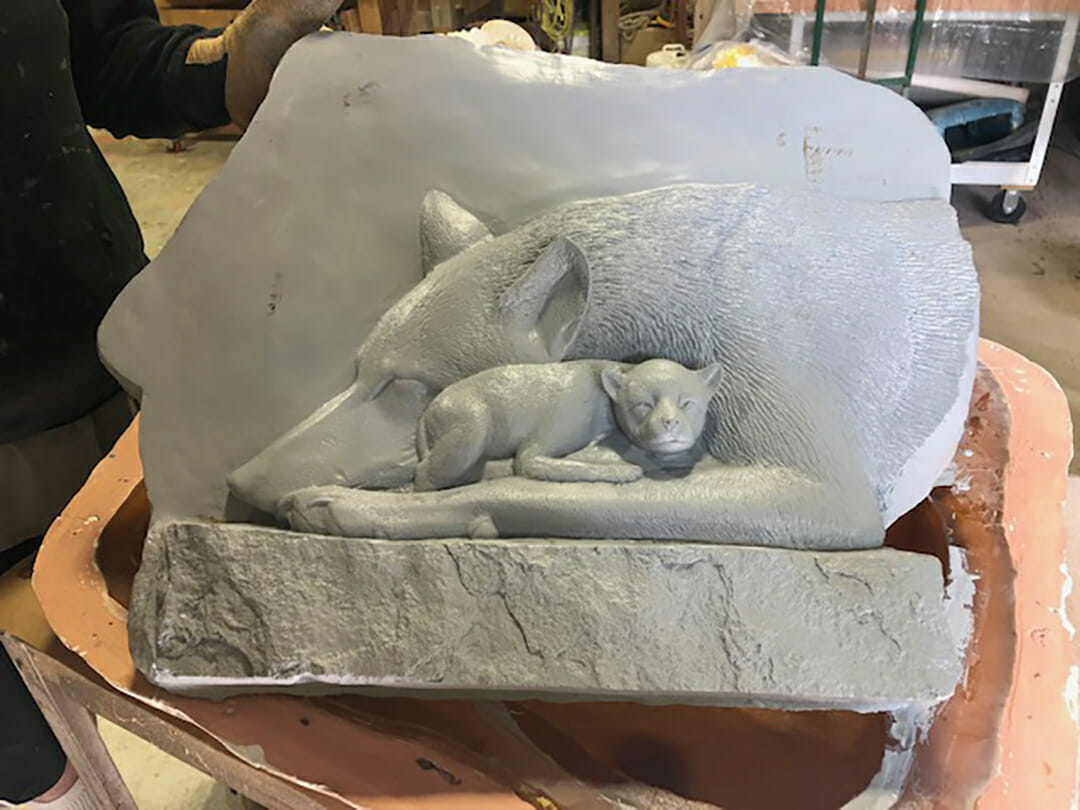 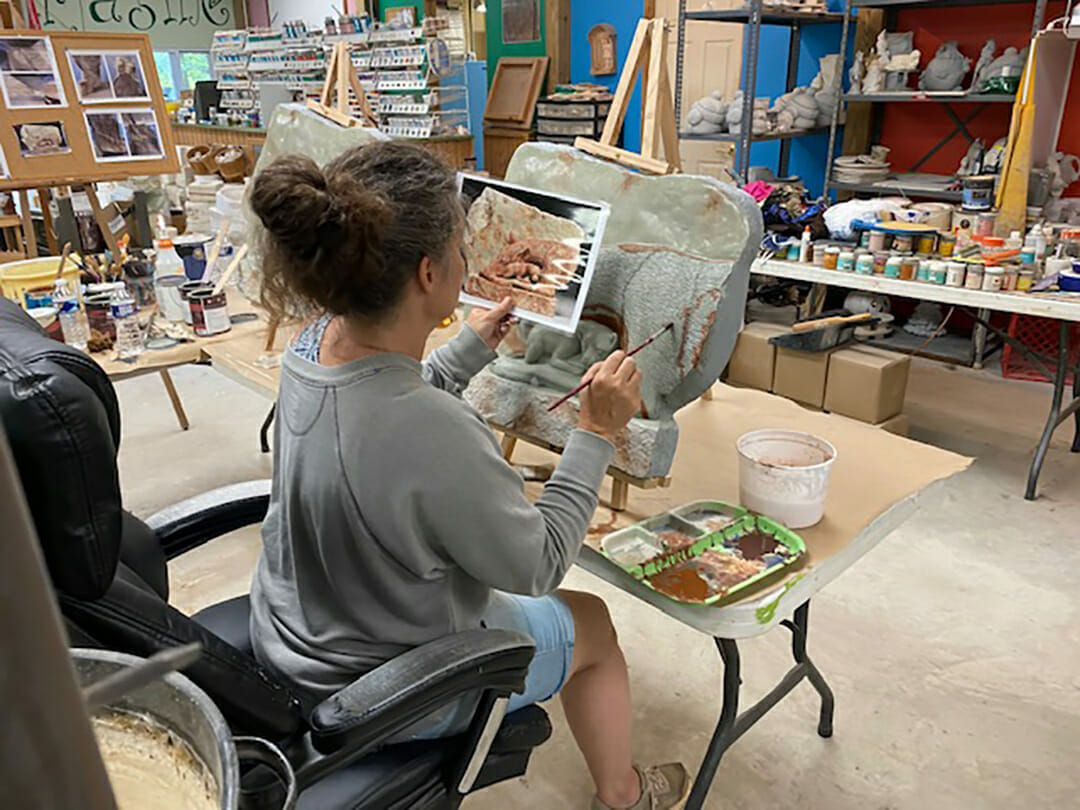 For a much more detailed account of his creative process for this piece, check out https://tinyurl.com/wjcucknr.

Weiler developed his love of nature during childhood trips with his father, so he recognizes the importance of inspiring younger generations to care about wildlife and the red wolf specifically.

“Getting out and exploring nature is the perfect way to fall in love with wildlife and habitat,” Weiler said. “When we are young, we are sponges for information and insights. Children don’t have preconceived notions about wolves and can see them for the majestic animals they are. My wife and I have been working with a group of Girl Scouts and just watching them become so passionate about wanting to save our red wolves has been inspiring to us.”

Fossil Rim currently has a fiberglass replica of the Just Settling In sculpture in its Nature Store. As soon as guests open the store’s outside door, they just need to immediately look to the left on the wall.

Castings of the sculpture can be made from a variety of materials. The fabrication and hand painting for the Just Settling In castings are done by Scenic Artistry & Custom Finishes.

Fossil Rim Director of Tourism Donna Steakley was pleased about the replica’s arrival.

“It’s exciting so that people can learn about the red wolves and maybe will be more likely to ask about them,” Steakley said. “We want people to understand the challenges they face and the conservation efforts for them. This is an American species. I appreciate that this artist is trying to help the cause by bringing attention to the red wolf.”

With Steakley hoping Nature Store guests will ask questions about red wolves and other Fossil Rim species, she stresses the importance of learning about the animals to her staff.

“My staff knows what this sculpture is about and the situation the red wolves are in,” she said. “The important thing is that we are there to answer questions guests might have. In general, it is very important to me that my staff knows about our animals and goes through the training to learn.”

Steakley appreciates art and invests time in stocking the Nature Store with artistic items that guests will enjoy.

“I thought this sculpture was beautifully done,” she said. “I love art. Alabaster picks up light and when you see the images of the original piece, you can see what I mean.”

Weiler also prioritizes conservation. So much so that 100 percent of the proceeds from the sale of each one of his sculptures goes toward animal conservation.

“It is very freeing to remove profit from the equation of what motivates me,” he said. “Being able to enjoy creating art without the underlying motivation to make money frees me to create art for the pure joy of it. It also allows me to sculpt what is most meaningful to me and not what I think the customer might desire.

“My work has become far more powerful with this freedom. Loti and I have such a great feeling being able to donate art to create awareness, especially during the pandemic when funds have been so scarce.”