Melanie Dittmer discovered how much she could learn at Fossil Rim back in 2016 as a hoofstock behavior and research intern.

Three years and a marriage later, Melanie Pearson continues to call upon the wildlife facility with an eye on veterinary status in 2021 and beyond. After finishing her internship, Pearson was accepted into the Texas A&M College of Veterinary Medicine & Biomedical Sciences.

She joined a research program at Texas A&M called Veterinary Medical Science Research and Training Program (VMSRTP), and that brought Pearson back to Fossil Rim in December 2019 to make a presentation for staff and interns. Her research project to present dealt with a retrospective look at anesthesia in sable antelope at Fossil Rim.

“For this project, we were looking at different pharmacologic combinations that can be used to immobilize sable antelope under anesthesia,” Pearson said. “There are a lot of different drug combinations that can be used to do this, but there hasn’t been a concerted effort to decide on the best combination. Once combo may be the best if you are working with an animal in a small pen, as compared to an animal in the wild. Maybe an animal with heart problems would need a different combination than a totally healthy animal, so factors like that go into the drug decision making.”

While the drugs under consideration in her research are very strong and need to be, the optimal combination will minimize significant side effects.

“We have a combination we prefer over all the others, because the resulting side effects are not as significant as those of other combinations that also work,” Pearson said. “The fewest complications and the quickest recovery time with the least effect on physiological parameters like heart rate, temperature, and respiratory rate – there is one combination that did rise to the top: thiafentanil and xylazine. Thiafentanil is an opioid and xylazine is an alpha-2 agonist. Both of these drug classes are commonly used to immobilize all types of animals, specifically hoofstock.

“Using these two classes together is synergistic, so they are better together than individually. You can use less of each one to decrease side effects, yet still provide the same level of sedation.”

How did Pearson go about conducting her research?

“This was a retrospective research project, which means it was done utilizing data that has already been collected,” she said. “I just went back into the records that (veterinarians Dr.) Holly (Haefele) and (Dr.) Julie (Swenson) provided access to. I read through them, gathered the data I needed, and analyzed it. While I’m limited to the data in the records, there is 15 years of it, which is nice.

“I primarily used electronic devices to download records and import them into Excel. Where there were gaps in the data, I visited Fossil Rim and looked at the physical records.”

Among former interns who did not join the staff, perhaps no one is still seen at Fossil Rim as often as Pearson.

“I’ve definitely noticed that every once in a while when I’m here, I’ll see a former intern who has come back to Fossil Rim, but as far as I know, I’m one of the only ones they can’t get rid of,” she said. “I grew up (95 miles away) in Carrollton, so proximity helps, plus I’m friends with a bunch of people on staff and so I have people to stay with when I come to Fossil Rim. I just really love it here, so I’ve made it a point to keep those relationships open since my internship.”

Before Pearson began her internship in the animal care department, she was already eyeing an eventual animal health career.

“It was an interesting (internship) experience, and it’s a little strange to look back on that time because I was interested in applying to vet school when I chose to do that internship,” she said. “I’m not entirely sure what my thought process was, other than knowing I wanted to work with exotic animals after vet school and that the internship would be good experience.”

While aspiring veterinarians would generally apply for a preceptorship at Fossil Rim, Pearson was not yet in vet school and thus not eligible to be a preceptee back in 2016. From that perspective, pursuing the animal care experience made sense.

“Since entering vet school, I’ve learned how valuable that really was,” she said. “One way is the relationships I gained with Holly and Julie while I was here. They have been very helpful to me through this research project and every stage of vet school. They have been awesome mentors.

“Also, it’s important as a veterinarian to see the perspective of the animal care specialists. So, the fact I knew how the hoofstock team operates and how the immobilization process works was very helpful for this project specifically and will be for my career in the future. People in animal care understand how their animals might tolerate an injection, or if they’d need to be really sneaky about giving medication.

“It’s important to have a good understanding of what their job entails and to have a good relationship with staff in that department. While the preceptorship was not an option for me when I was here as an intern, I did shadow Holly and Julie when possible on my days off to learn what I could from them. I loved the animal care experience I gained, and that experience helped me learn what I wanted to do most.” 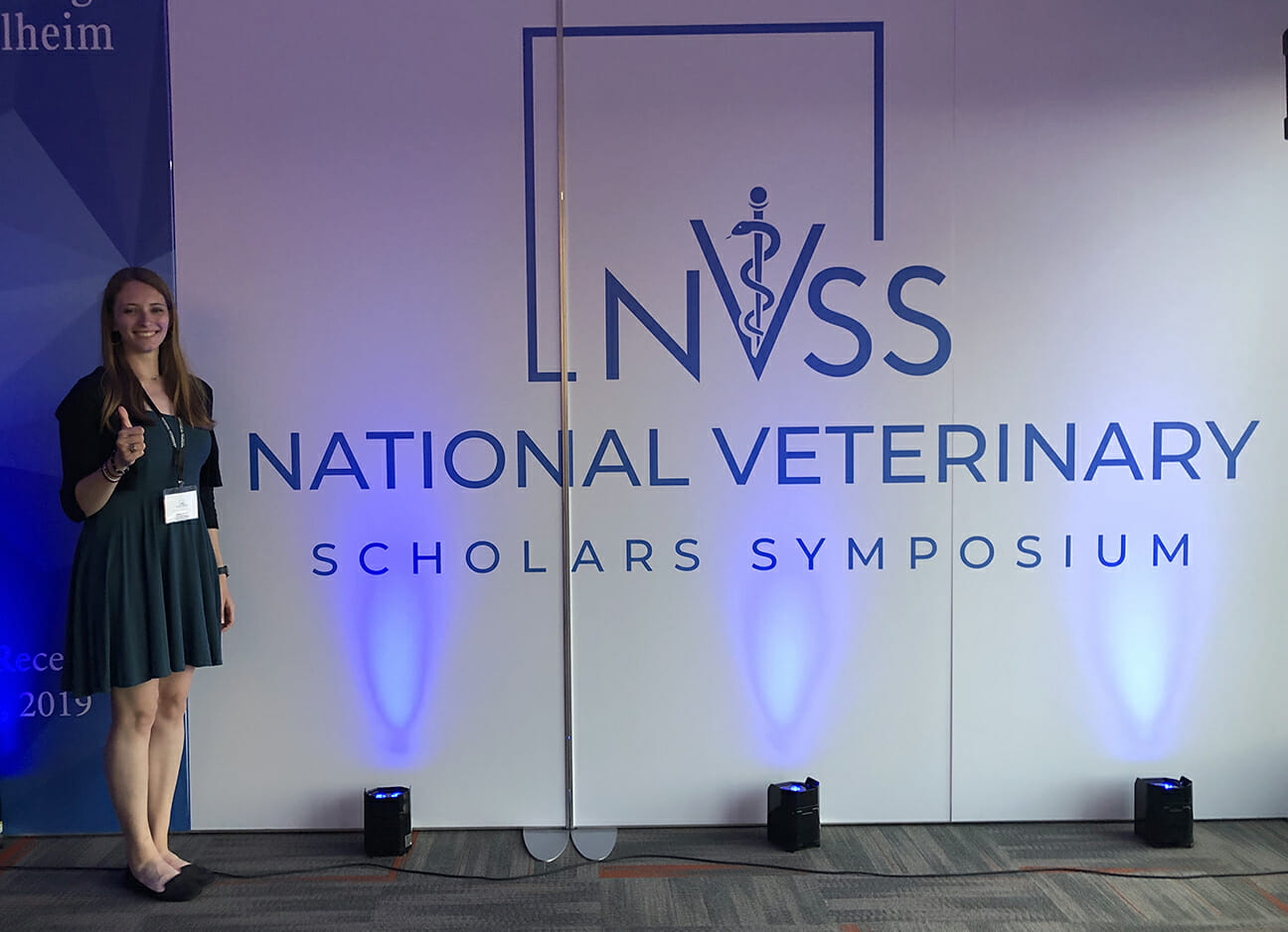 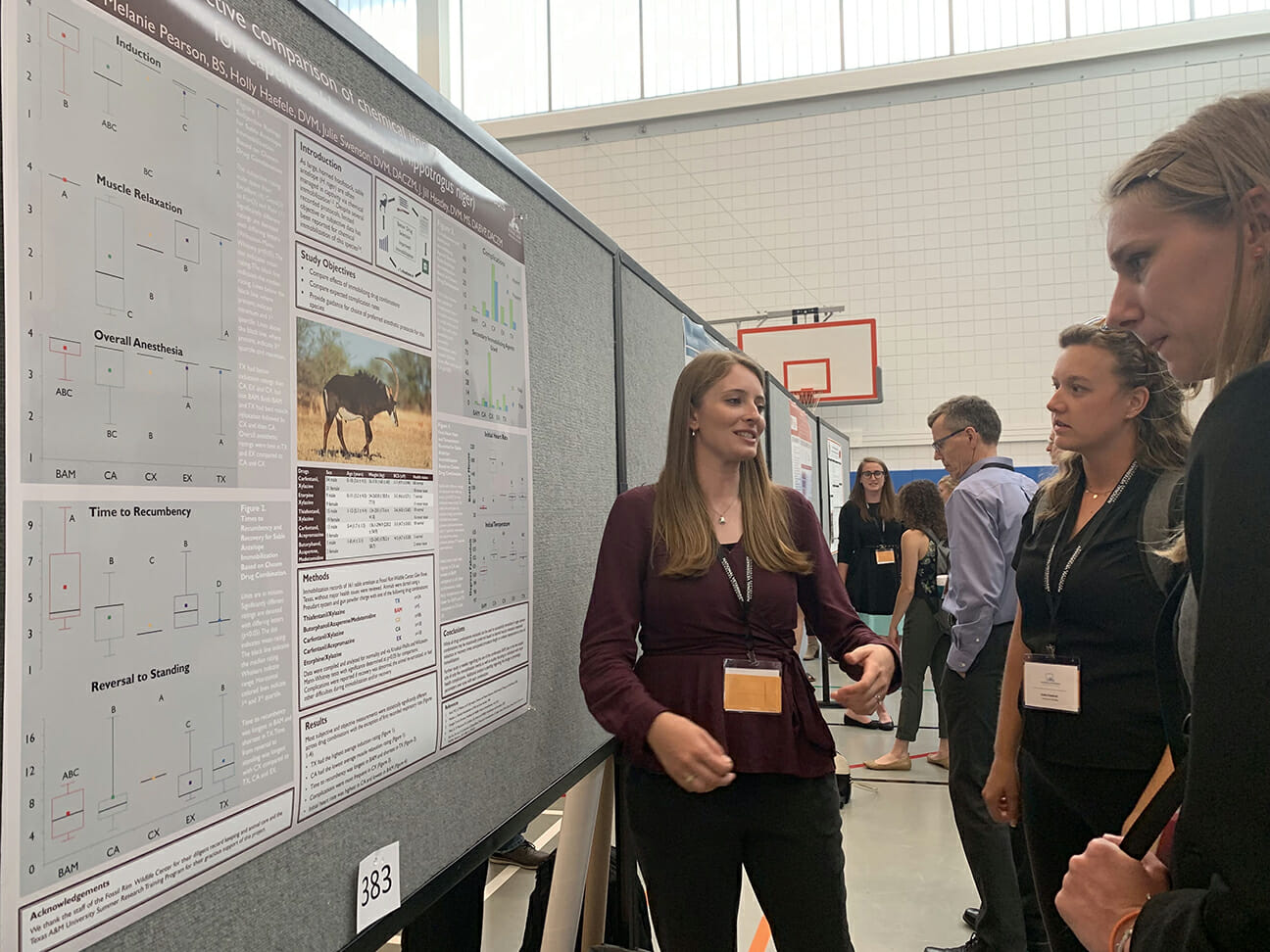 There is still work to be done, but Pearson is continuing to power her way toward veterinary status.

“I’m in my third year of vet school at Texas A&M,” she said. “The first three years are completely bookwork, and then the fourth year is entirely clinical rotations. Starting in May 2020, I’ll enter clinical rotations at Texas A&M’s teaching hospital and also travel to zoos across the country for rotations I will have set up. Then, it is exciting to think about graduation in May 2021.”

As someone with a better understanding than most of multiple Fossil Rim departments in terms of animal care and animal health, a comment Pearson made in 2016 seems to ring true today:

“A goal of many people here is for interns to learn as much as they can and be involved in a lot of different areas of Fossil Rim,” she said. “They facilitate that really well, so it is an awesome place to get hands-on experience in a wide spectrum of conservation.”