There are not many animals at Fossil Rim native to South America, but the maned wolf is a memorable representative because it is very different from all of the other animals at the facility.

Though termed a wolf and closely resembling a large red fox, this animal is placed in a genus of its own – Chrysocyon.

“Physically, they are unique,” said Jess Rector. While currently a cheetah specialist, Rector worked with the maned wolves daily during her three months as an intern in 2019, plus she currently assists with their husbandry and helps with veterinary procedures. “They have very long legs, which help them see over tall grasses in their natural habitat. They have that mane on their back that stands up when they are startled or sense danger. They are the largest canid in South America and their closest living relative is a bush dog.”

Maned wolves live in the Jim Jackson Intensive Management Area (IMA) at Fossil Rim. Guests can use their noses to tell when they are near the maned wolf yards.

“Their scent is very unique,” Rector said. “Their urine smells strong like a skunk. Scent marking is a huge part of how they communicate with each other in the wild.”

On that note, wild maned wolves primarily live in the Cerrado – a vast savanna ecoregion found mostly in Brazil. The Cerrado is the world’s most biodiverse savanna, home to five percent of the planet’s animals and plants. The second largest of Brazil’s major habitat types after the Amazonian rainforest, the Cerrado accounts for 21 percent of the country’s land area.

“Maned wolves manage to do well in various habitat types,” Rector said. “Their big satellite ears help them hear prey in the area. They pounce a lot with their long legs onto animals like bugs, which is certainly behavior helpful in their native tall grasses.

“If an insect is flying around their head, they’ll try to chomp it. They get some snakes and squirrels that end up coming into their yard. Interacting with the native wildlife is a great form of enrichment for them.”

What about the temperament of these animals? Rector can at least comment on what she sees from them at Fossil Rim. When she references “our wolves,” she’s also including Mexican wolves and American red wolves.

In fact, technically the maned wolf is not a wolf. Fossil Rim currently has three sibling maned wolves that are two years old, as well as an older, non-reproductive female.

“They are the most curious of our wolves,” she said. “If we go in with them to fix a fence or something in their yard, they are always creeping around a tree, getting as close to us as they are comfortable with to see what’s going on. Some days, the wind may startle them and they might stay in their dens until it calms down.

“They aren’t pack animals like our other wolves. We have ‘Jessie’ and ‘Jordan’ in a yard together – they get along well, but they have their own spots in the yard and don’t play as much as the other wolves do at a similar age. They are more likely to hang out by themselves.

“In comparison, our Mexican wolf pups constantly play, jumping over objects together and roughhousing. Even though these two are only two years old, they are more likely to be interested in bugs flying around than playing with each other.”

On the surface, maned wolves do not appear to be aggressive toward people, but Rector was careful not to disregard the possibility they could be.

“I wouldn’t necessarily say they are less dangerous than our other wolves,” she said. “If you put any animal into a stressful situation, it can become dangerous. But, it is easier for (Carnivore Specialist) Tessa (Townsend) to train them and get them onto the scale for weights. We are able to build more trust with them, which is perhaps in part because they aren’t a recovery species.

“We are able to work more hands-on with them than the other wolves. They are cautious of us like the other wolves, so they don’t want to get too close to us. But, they are more outgoing.”

The three young maned wolves – the two aforementioned sisters and “Francisco,” look drastically different than they did when they were born.

“They are all black with a white-tipped tail when they are born,” Rector said. “They don’t look like maned wolves besides the ears and snout. Within the past year, our young maned wolves gained much more red in their fur.

“Jordan has more of a black tint and her legs are a bit darker, while Jessie is a bit lighter. Francisco is bigger than the girls and somewhat darker.”

Having been at Fossil Rim for nearly half of the pups’ lives, Rector has watched their development toward adulthood.

“It’s very interesting to watch them bond with Tessa or the interns,” she said. “When I was the intern, I saw that it would take at least a week for them to warm up to a new person. They don’t like when two people are in their yard at the same time. They won’t come up to the fence and take a meatball from a new person. As they get older, they are more trusting and reliable to approach you at the fence every day for a meal.

“They are always up at the front of the yard waiting, knowing it’s food time in the morning. Overall, they are doing well.”

Just like so many aspects about maned wolves that separate them from other animals, they make some unique sounds, as well.

“Their vocalizations are pretty cool,” Rector said. “They’ll do a pulse whine, which is unlike any carnivore. It’s a repetitive whine you might hear during breeding season, or from a parent to offspring when it’s time to eat.

“They also have a roar bark, which is very unique to them, as well. That’s cool, because if you are anywhere in the IMA you can hear it. It could be alerting their siblings of (perceived) danger.”

A “puffing” noise to pups is one of several other interesting maned wolf sounds.

Although Rector focuses heavily on cheetahs now, she definitely drew upon her experience with the maned wolves when she was making that transition.

“They are kind of similar to the cheetahs in the fact that they have personalities you can see come out as you work with them and create that trust and bond,” she said. “You see their behavior change over time. They all have their own routines. Learning that about maned wolves helped me pick up on differences among the cheetahs.”

There is a very interesting maned wolf topic that we have not explored just yet: diet. The food eaten by most Fossil Rim animals would not warrant as much attention as we are about to give the maned wolf diet, but that is because the variety in what these omnivores eat is pretty fascinating.

For example, to get us started, Townsend was asked to share a list of some of the maned wolf diet ingredients. Beyond limited-ingredient kibble and lean ground meat, there are prey items like rats, mice, chicks, and quail.

Eggs are also a key staple. When we look to fruits and vegetables, she mentioned avocados, bananas, mangos, apples, pears, carrots, and eggplants.

“Part of the reason maned wolves are a cool species is because of their diet and all of the items that go into it,” Rector said. “Even though we take care of them in the carnivore department, they are omnivores. In the wild, they’ll eat insects, small rabbits, rats, and mice, but their diet mainly consists of fruits and veggies.

“In the wild, there is one fruit that is especially important – the lobeira. The maned wolves play a big role in their home environment because as they are eating all these seeds in their natural home range, they are excreting these seeds, including that of the lobeira fruit, and helping with seed dispersal.” 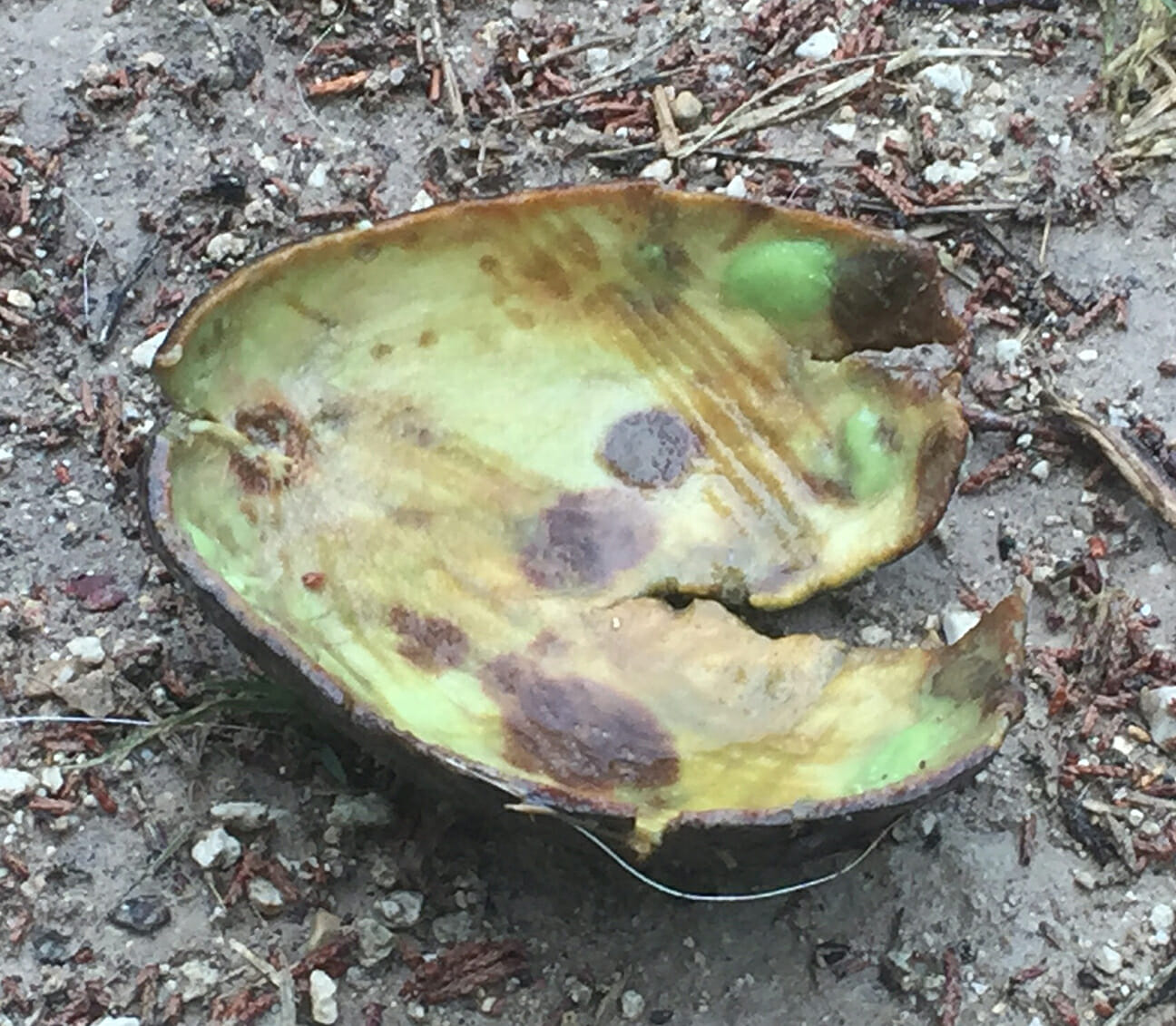 At Fossil Rim, maned wolves get kibble each day, as well as an egg each day. The egg is usually either hard-boiled or raw, but sometimes scrambled.

“For the kibble, in the past we have swapped different flavors,” Rector said. “Sometimes it might be sweet potato and chicken, and other times it could be duck and (sweet) potato.”

One of the aforementioned prey items is a daily staple, plus the maned wolves get fruits and vegetables in the afternoons.

“Eggplant, mango, apples, sweet potatoes, bananas – we try to keep it as varied as possible,” she said. “We might steam the vegetables. You try to see what each wolf really likes. It’s a lot of experimenting.

“We’ve made slurries for some wolves and mixed them into the kibble. For example, we recently did a tilapia, pear, sweet potato, and rice smoothie. It makes the kibble more enticing; one of the wolves really liked it.”

Townsend goes shopping for fresh fruits, vegetables, and other items every 10-14 days.

“We might freeze the juice of a coconut and give that to a maned wolf as enrichment,” Rector said. “Sometimes, they get a mackerel or other fish as enrichment.”

Sure, the maned wolves at Fossil Rim may prefer different food ingredients, but as opposed to a large hoofstock herd there are only a few of the wolves, so the staff can take note of what each wolf shows it will eat and then incorporate that into its diet often.

“We are lucky to have the resources to change their diet so much,” Rector said. “We might switch to venison instead of their regular lean meat or mix in multiple prey items. If they aren’t taking the medicine the veterinarians need them to take hidden in a particular meat one day, we always have several other types of meat we can try.”

When guided tours return to Fossil Rim – specifically Behind-The-Scenes Tours, Rector thinks that visiting the maned wolves and other IMA residents is a great call.

“I would definitely recommend a Behind-The-Scenes Tour, because if you come on a nice, sunny day, the (maned wolf) girls are usually laying around in the sun,” she said. “They are curious enough to come up to the fence. If you are anywhere in the IMA and they roar bark, you’ll be able to hear it. Plus, you’ll never get a true sense of what they smell like until you smell it for yourself.”

Maned wolves have a population classification of “Near Threatened” according to the IUCN Red List, and their population trend is unknown.

“They may not be an endangered species, but they are Near Threatened and it is still important that we do conservation work for them now,” Rector said. “One of their biggest threats in the wild is human encroachment. People are changing the land in their native range so it can be used agriculturally. As the human population grows, that will only increase the threats they face, so we have to be working for maned wolves now.”