Each of the last 10 years in April, the third graders of Glen Rose Intermediate School get a crash course in wildlife and conservation – including visiting a white rhino crash – at Fossil Rim Wildlife Center.

A crash is a group of rhinos, and while some of the students who visited April 10 might have already known that, it was the first trip to Fossil Rim for a stunning number of children when considering the school is just five miles from the wildlife center. The group included nine teachers and 135 students, while the number of students over the years has ranged from 120-152.

“I believe that about 60 percent of these children are visiting Fossil Rim for the first time,” said Candace Stegint, one of the third-grade teachers in attendance. “Several children asked how far Fossil Rim is from school, like they didn’t realize it was just a few miles down the road.”

Stegint was actually the person a decade ago to look into the possibility of these annual visits.

“When I arrived at Glen Rose Intermediate 10 years ago, we were doing a fundraiser for Fossil Rim,” she said. “The third graders were taught about nonprofit organizations, and they donated the money they raised from a carwash to Fossil Rim. We decided to partner with Fossil Rim and learn more about what nonprofits do.”

Enter Kelley Snodgrass, who has worked at Fossil Rim since it opened to the public in 1984 and is currently both the interim executive director of the wildlife center and the GRISD board president.

“Kelley was already working with the school, so I called and introduced myself,” Stegint said. “He was so welcoming and told me it was Fossil Rim’s mission for every third grader in Glen Rose to come through the park and experience Fossil Rim.”

Snodgrass talked about why the mass infusion of local youth on a day in April each year is so important.

“I think this really gives the opportunity for every GRISD student to be able to go through Fossil Rim and learn a little bit about a place that is nearly in their backyard,” he said. “To learn more about conservation and the efforts being made out here at Fossil Rim Wildlife Center is important because these kids are part of the community that Fossil Rim exists in. If a child grew up in Glen Rose and never had the opportunity to come here, that would be a shame and that’s exactly why we do this.

“We’ll continue on with it. I think it instills a sense of community pride, but also global pride, for them to know we are part of projects in places like Africa.”

The students definitely had fun, but learning stayed at the forefront of every activity – other than maybe lunchtime.

“As teachers, we hope these kids get an appreciation for nature and animals,” Stegint said. “Be compassionate because animals need to be treated with kindness. The more you know about animals, the more you can do for them. We’ve had several children go on to become very conservation-minded in high school and say they remember this trip very well.”

When the tour bus that Snodgrass was driving reached the White Rhino Yard, not only did several students know rhinos are poached for their horns, but one of them pointed out that the horns are made of keratin. The students had been studying Fossil Rim and its animal species on their iPads ahead of time.

“We try to teach a lot about, not only life science, but animal behaviors and habitats,” Stegint said. “They know so much more than you think and they remember very well. We did study about rhinos. For this one field trip, in our curriculum we cover all eight TEKS (Texas Essential Knowledge and Skills) mandated by the State of Texas for life science.

“This is hands-on learning; the children are hearing vocabulary terms and seeing concepts they’ve been taught.”

Stegint mentioned that these annual tours began in school buses, but said that Snodgrass made sure they transitioned to open-air tour vehicles in later years for the benefit of the experience.

“A few years ago, we started allowing children to bring their camera phones to take pictures, and they have fun sharing their pictures with family and friends,” she said. “The giraffes, zebras and cheetahs are always favorites among the students, and of course any baby animals.”

In addition to a guided bus tour throughout Fossil Rim, students also visited the Children’s Animal Center, took a nature hike, learned about Fossil Rim’s compost windrows and had a picnic lunch.

“Another change over the years besides the tour buses and picture taking is working with Fossil Rim’s education department in the planning of activities before or after the guided tour,” Stegint said. “That’s taught the children a lot about the animals and the environment.”

Fossil Rim’s Recycling and Waste Conversion Coordinator Caitlin Pyle made sure the students left with more composting knowledge than they arrived with.

“This generation of children are aware of a lot of things that are going on in their environment,” Stegint said. “We study conservation and recycling all year. Caitlin started a compost program at our school.

“She did a whole presentation with her intern, and the children learned so much from that. I know this generation of children want to make this world a better place, and they are excited to learn about what they can do to preserve it.”

There were some humorous moments on the guided tour. On the bus Snodgrass was driving, Tour Guide Taylor Breeden said the white rhino bull’s head weighed 850 pounds.

“That’s more than five John Cenas!” a boy exclaimed, in reference to the famous wrestler. 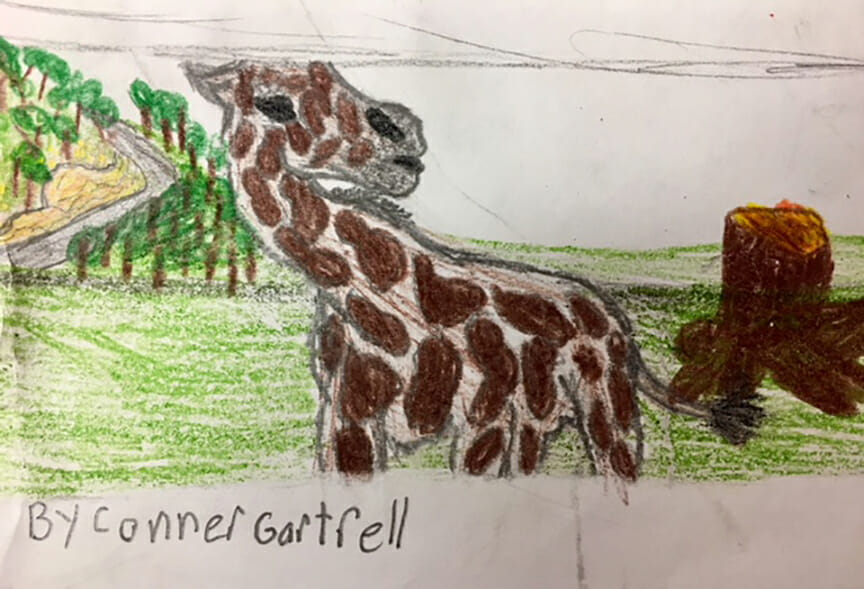 Some avid fishermen in Stegint’s class were fascinated at what fish might be in every pond, and made sure to ask Snodgrass.

“A roan looks a bit like a donkey on stilts with horns and extremely big ears,” Breeden said, to which a boy replied, “It looks like my sister!”

But Breeden always steered the ship back to learning, like when she taught the students a new word – crepuscular – in regards to the mountain bongo being active primarily at sunrise and sunset.

Sara Ellenberger is a nine-year-old in Stegint’s class.

“I was looking forward to feeding the animals,” Ellenberger said. “I like all of them. I didn’t know that when an animal breaks a horn off, it won’t grow back.”

“I woke up thinking about feeding giraffes and the other animals,” Matthews said. “Learning how Fossil Rim got its name was interesting. My favorite animals here are giraffes and cheetahs. I like field trips because I just like going away from the school, not having to do math, and doing something else.”

River Yates is a nine-year-old in Stegint’s class.

“I was ready to take some pictures,” he said. “I have my own camera and I like photography. I didn’t know that the bongos have their babies in (the cover of) the trees. My favorite animals here are emus and they aren’t as crazy as the ostriches.”

Dixie Snodgrass, a nine-year-old in Marla Bretton’s class, is the granddaughter of Fossil Rim’s Snodgrass.

“I just wanted to see the animals and my pop,” she said. “I’ve visited him a lot out here. Field trips are fun, but you also need to make sure you are learning. Giraffes are my favorite because I like feeding them and how tall they are.”

With the elder Snodgrass driving the tour bus for multiple hours, he gets to see exactly how the experience is impacting the students.

“What you can talk about regarding the dwindling population and threats facing rhinos, you can talk about with so many species,” Snodgrass said. “They don’t have to be from across the world. We have so many species that are threatened right here (in Texas). Making the connection to the natural world under this blue sky, seeing the animals, plants and learning about all the topography changes in this region – this is a great learning opportunity in the living classroom.”

Stegint is so thankful for the tradition she envisioned a decade ago.

“Every March, I call Kelley and the Fossil Rim staff waves their magic wand to make all of this possible for the children,” she said. 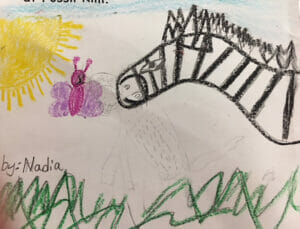 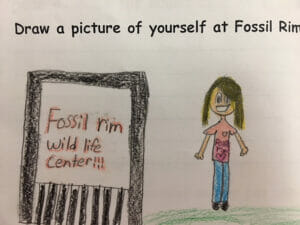 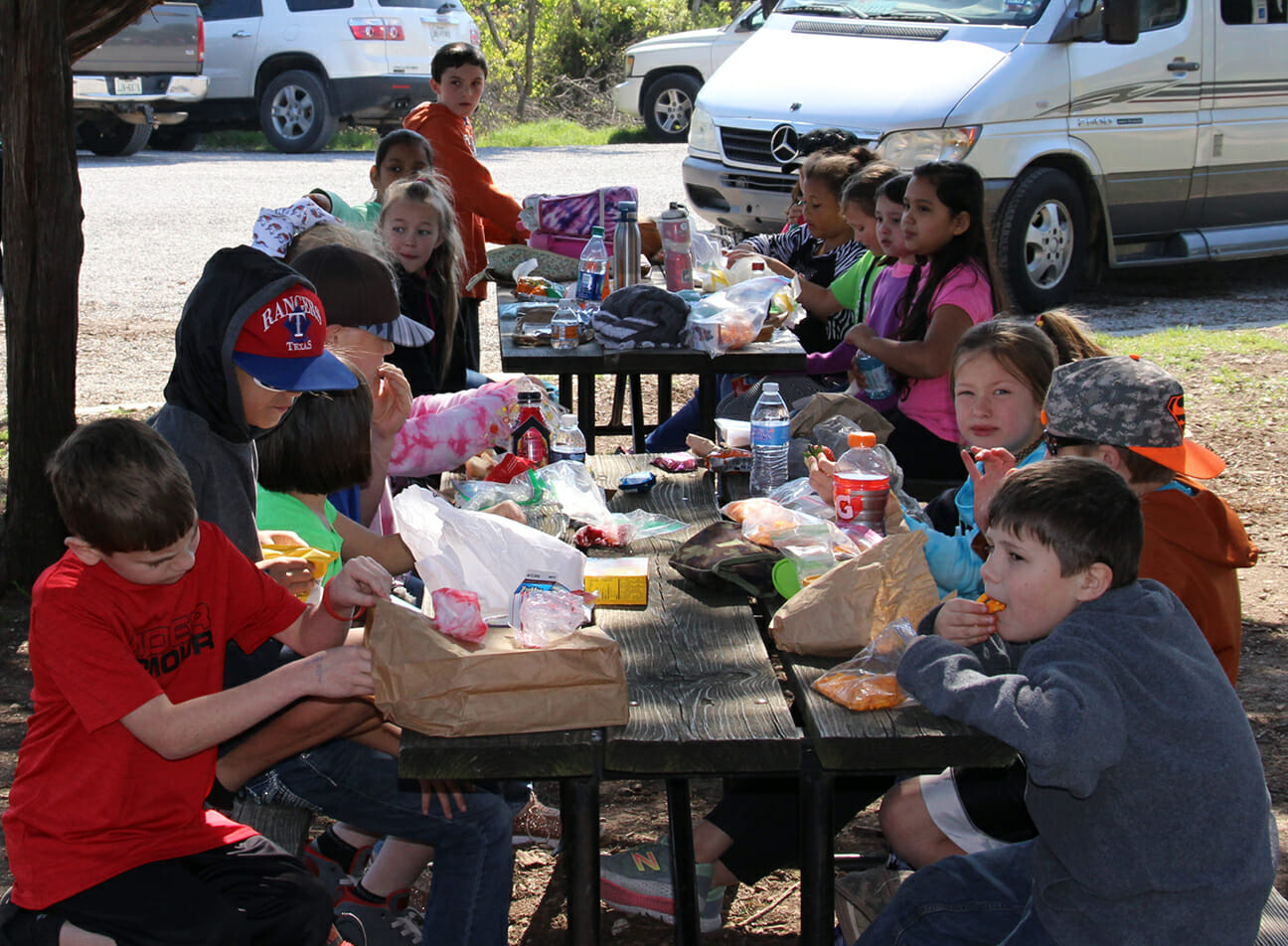 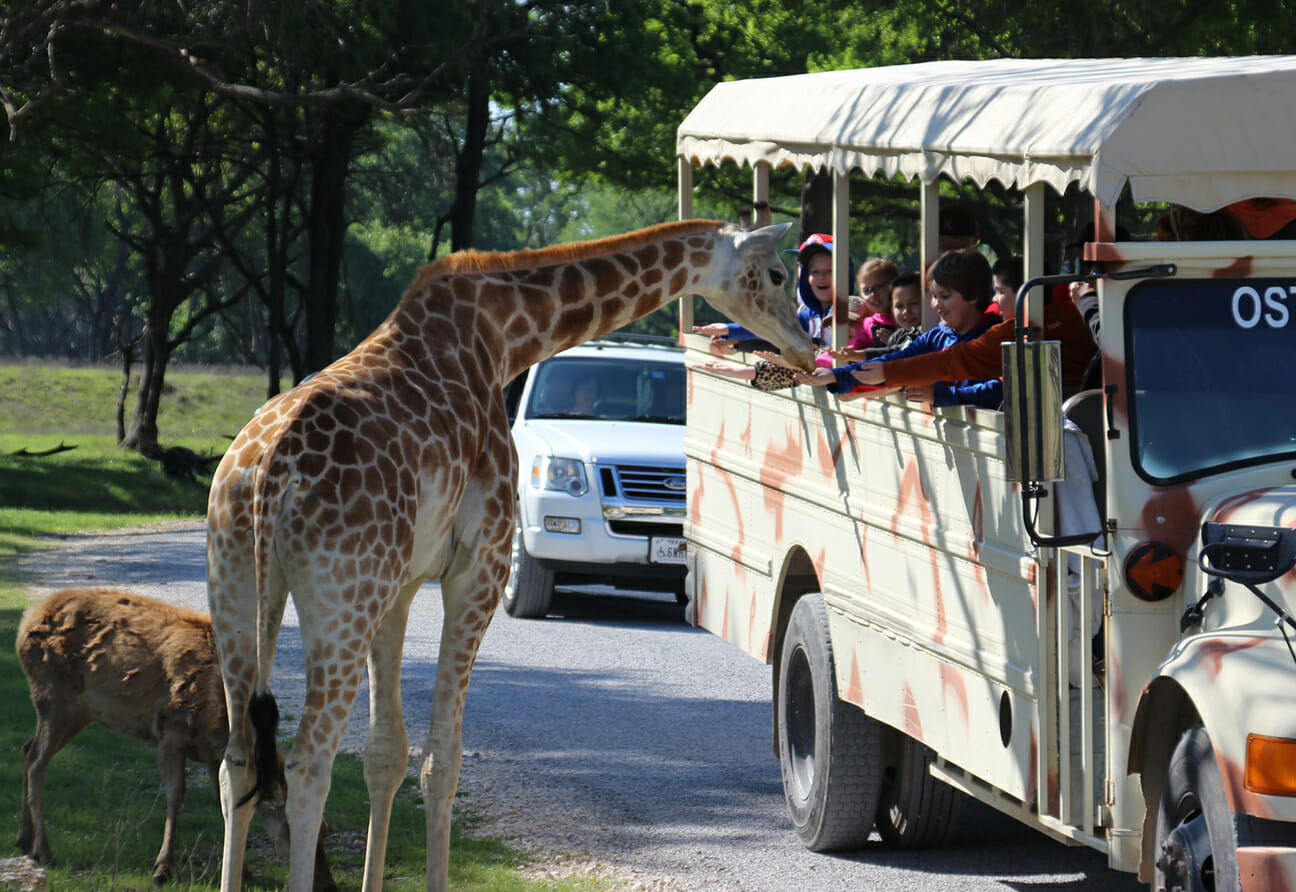 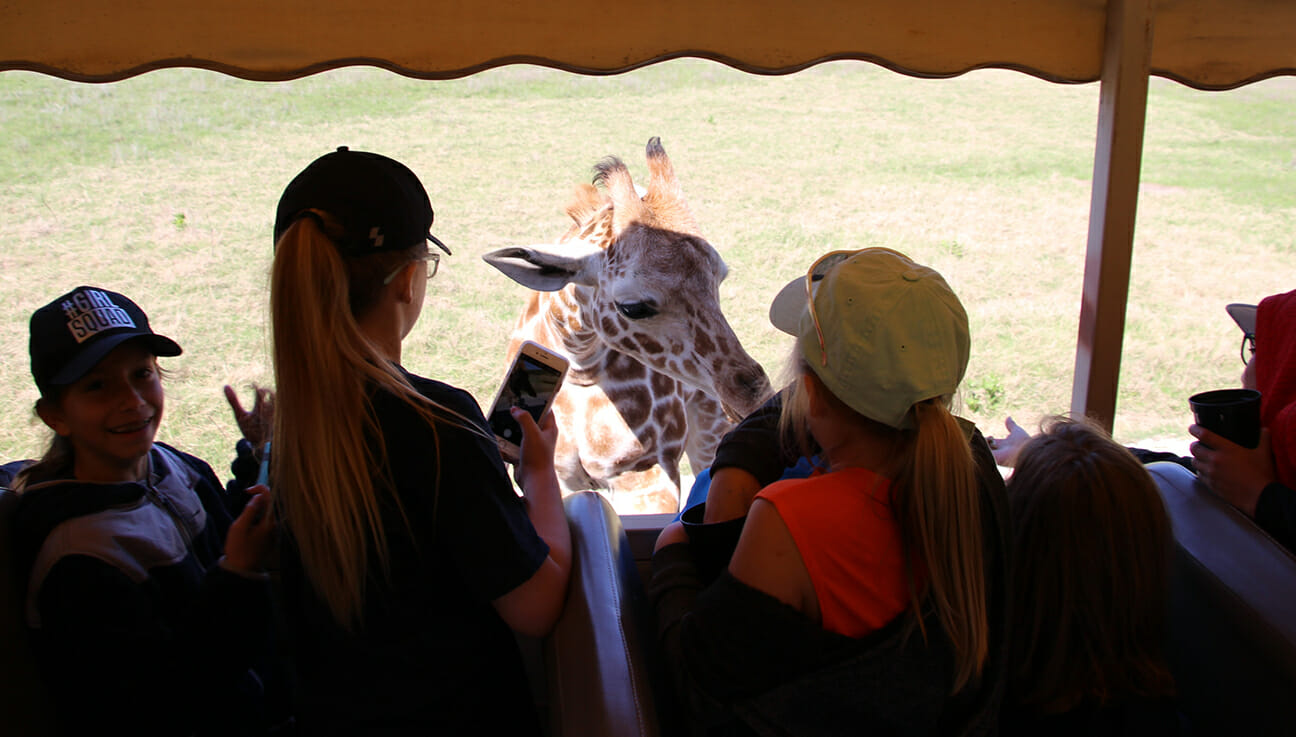 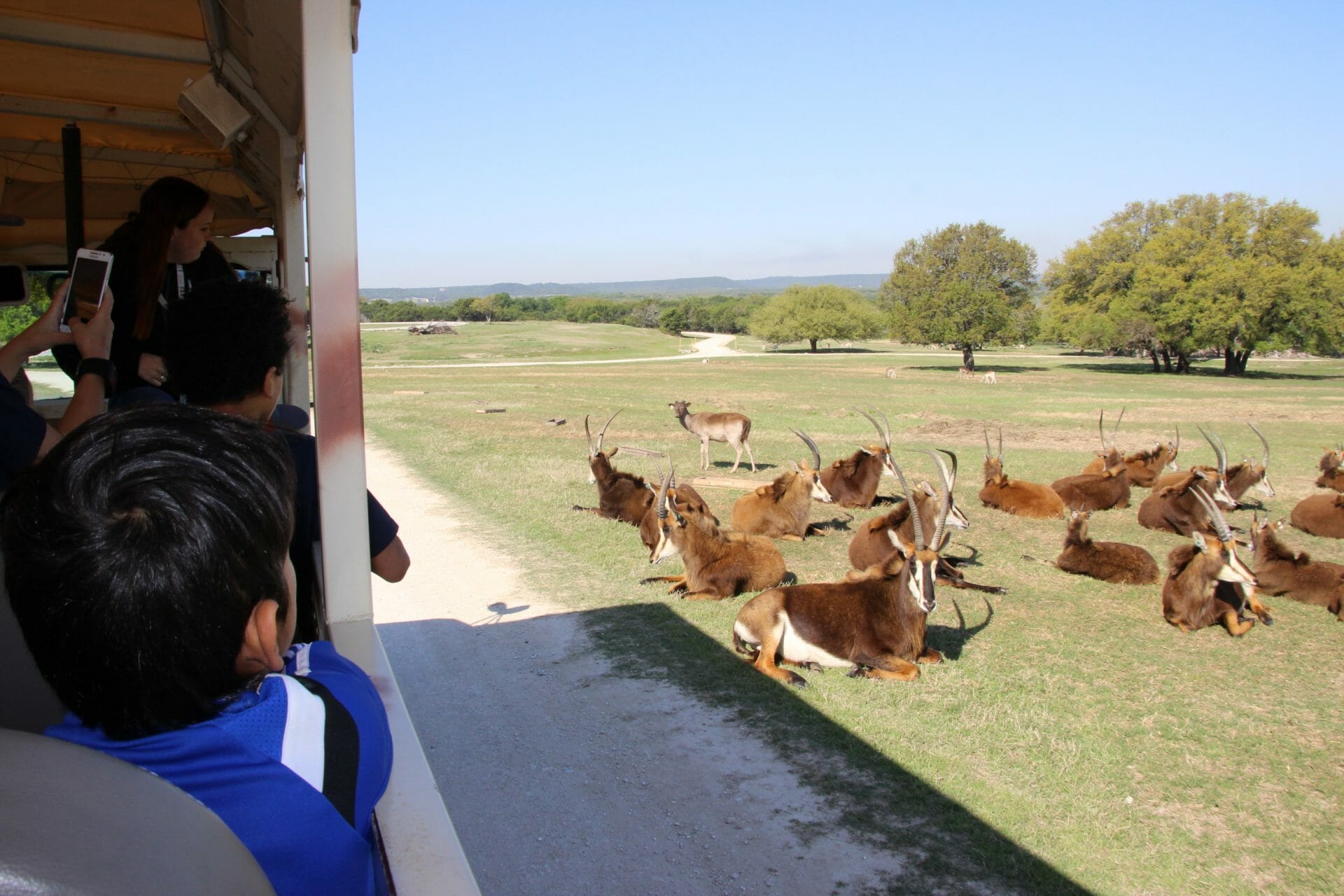 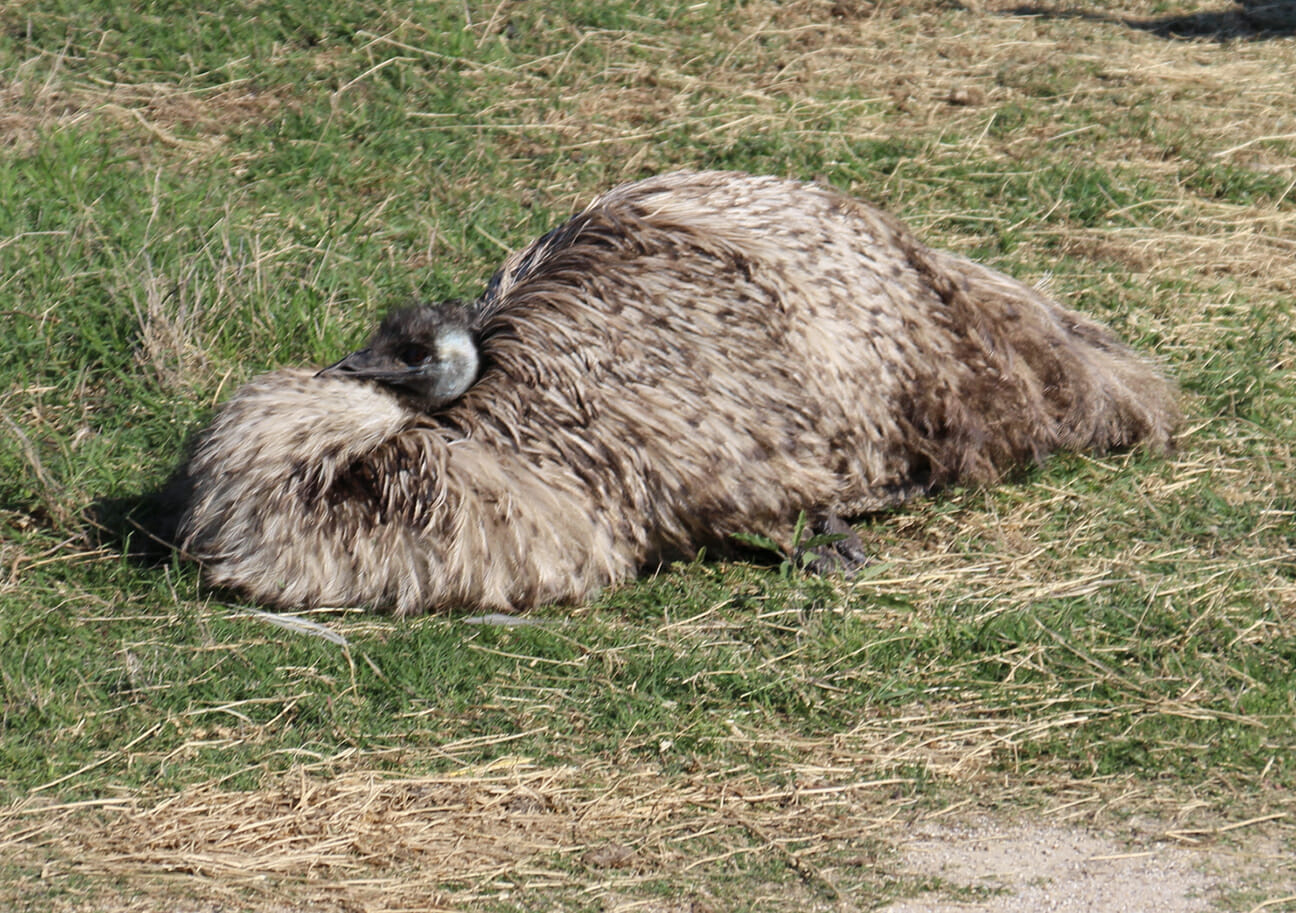 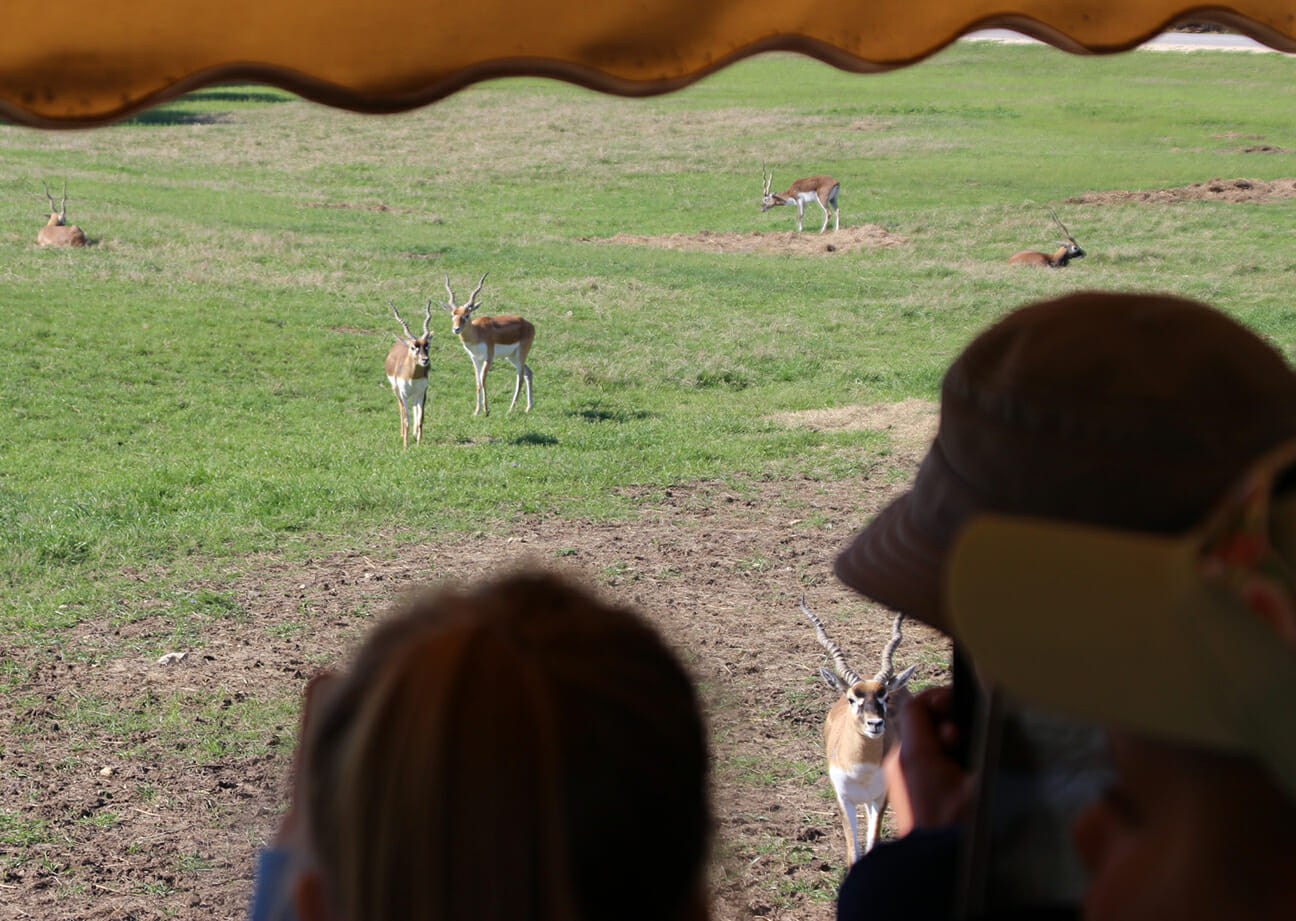 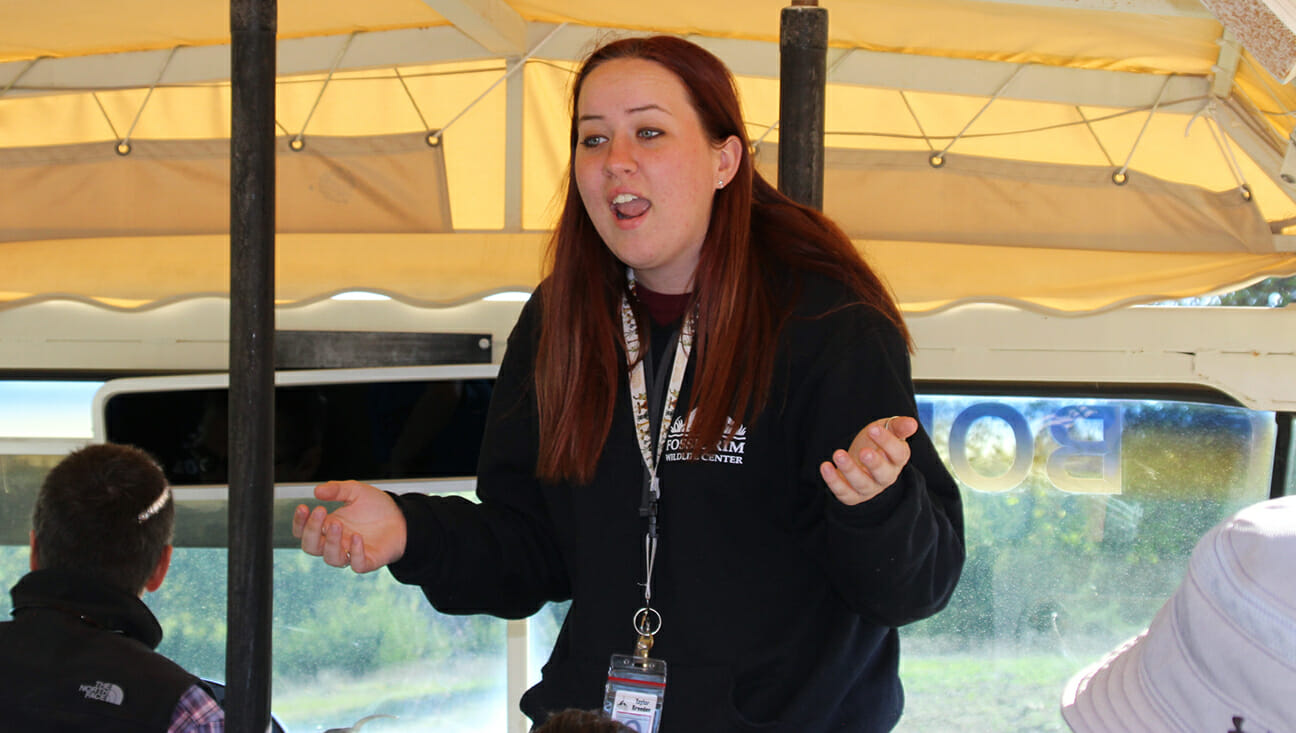 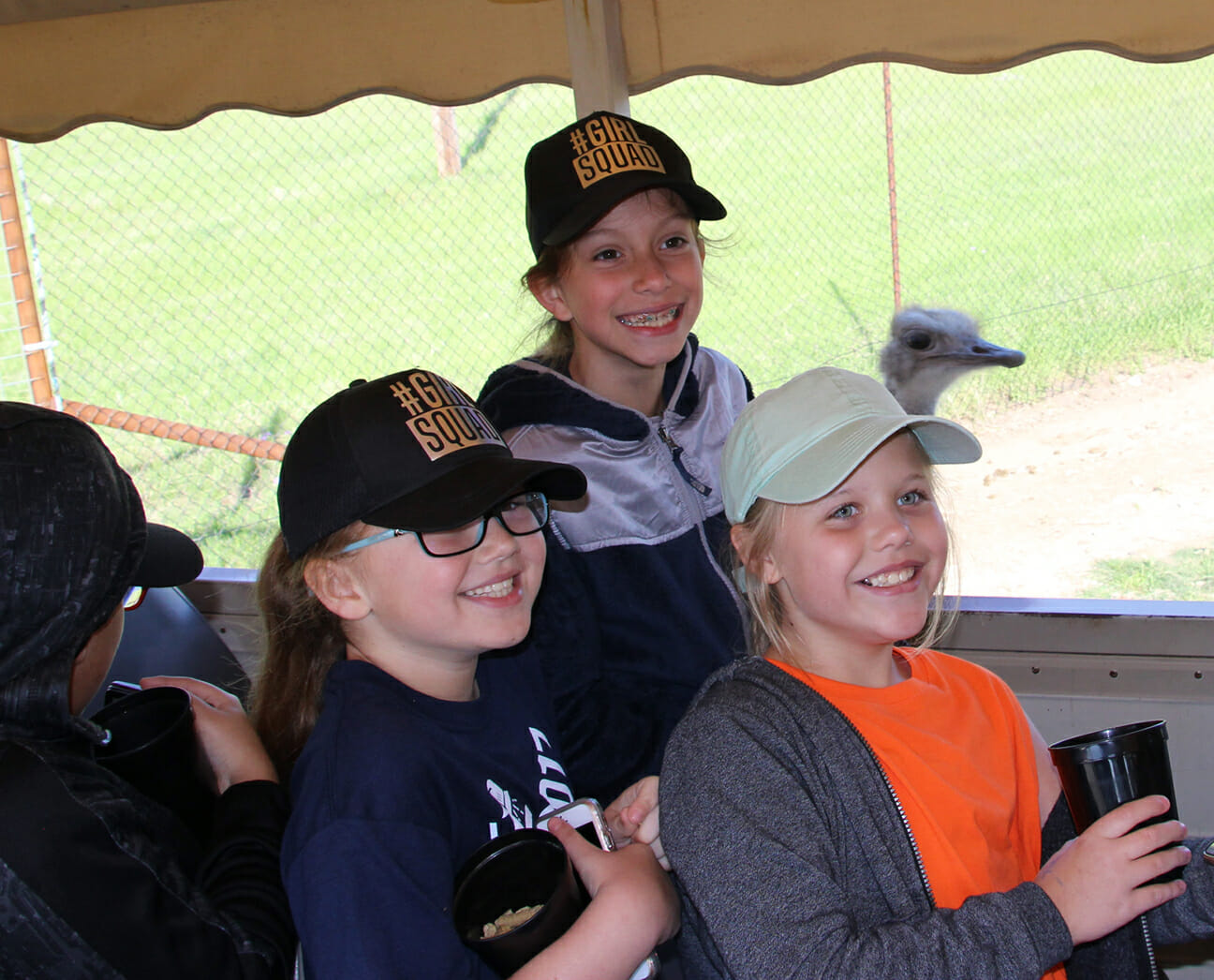 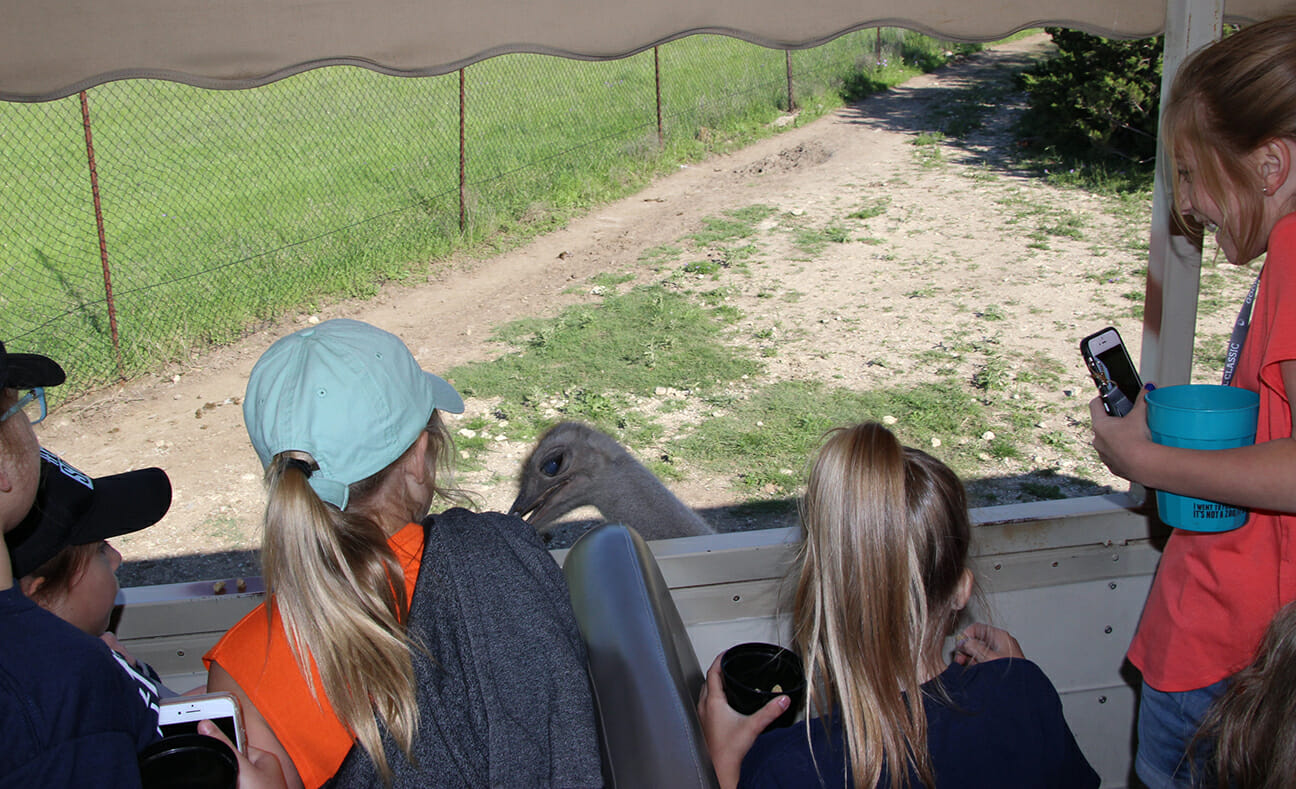 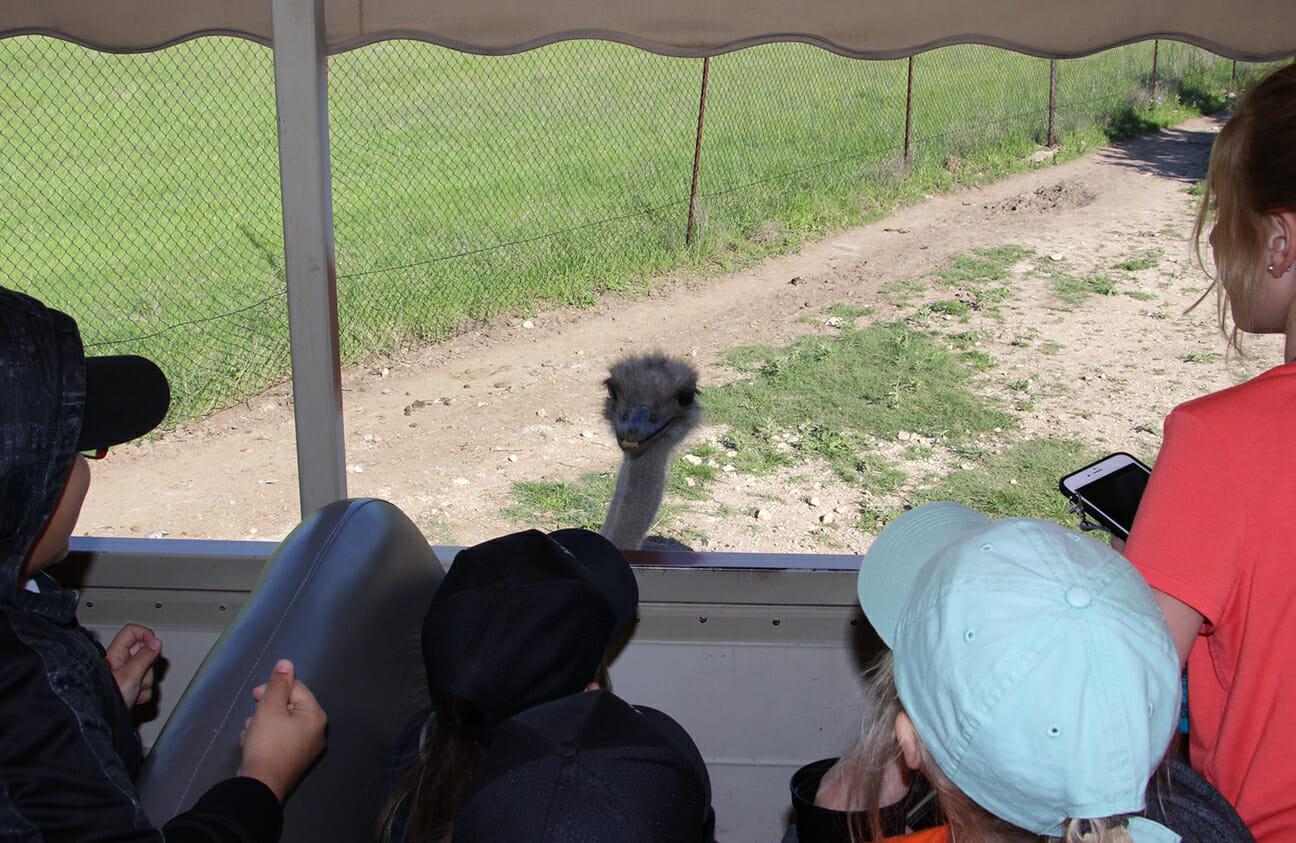 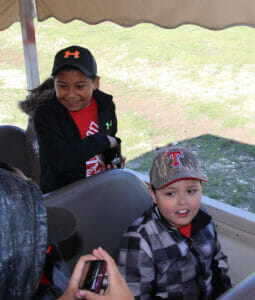 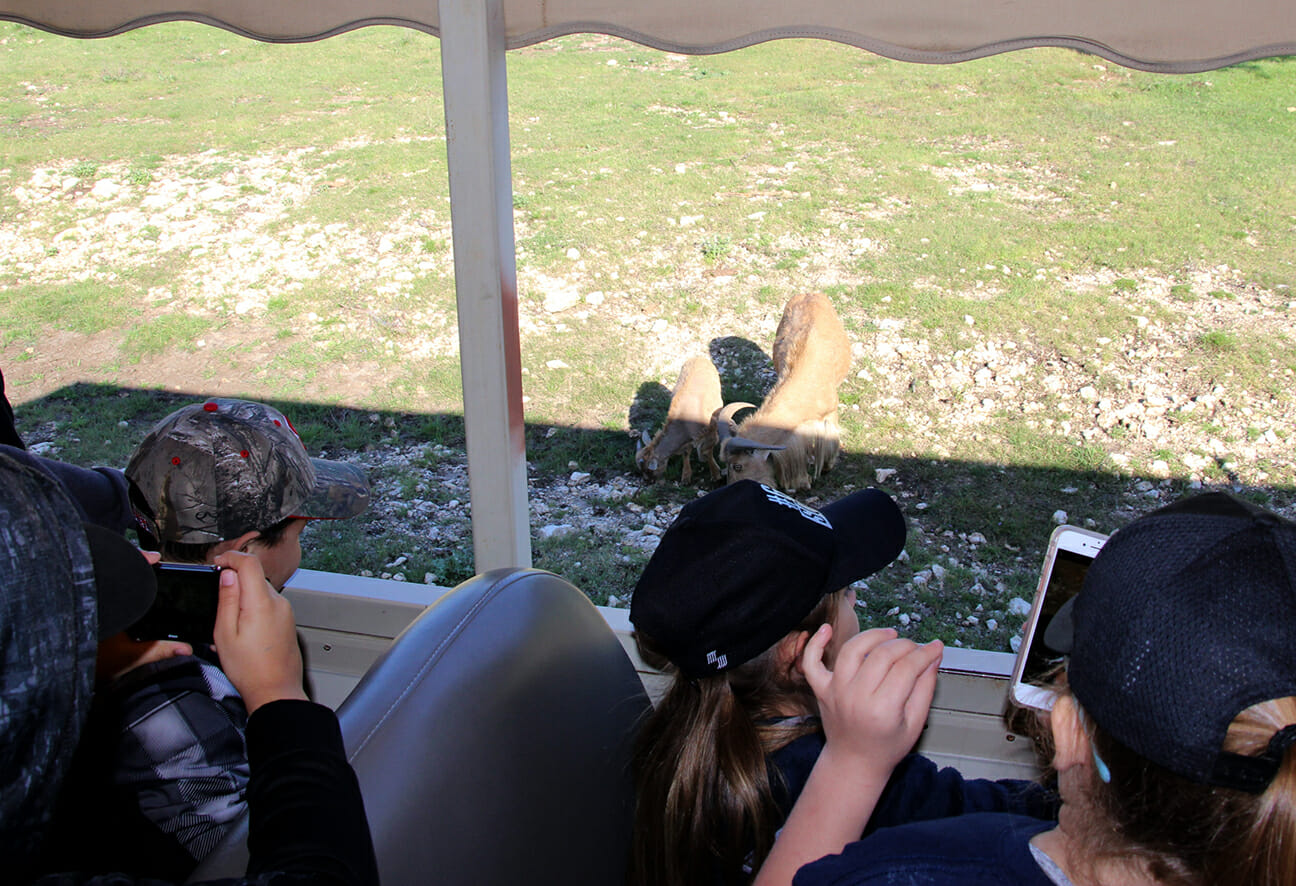 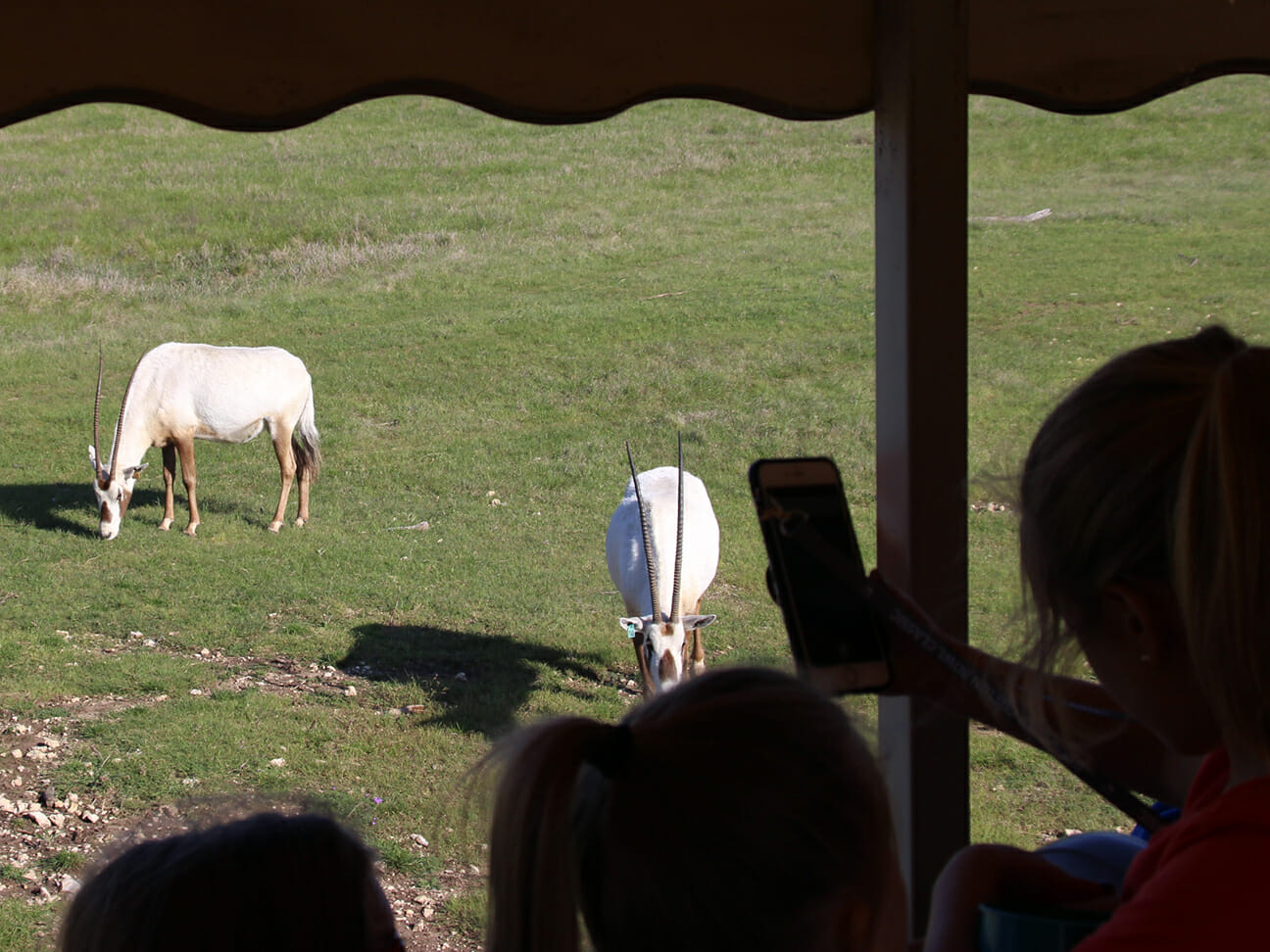 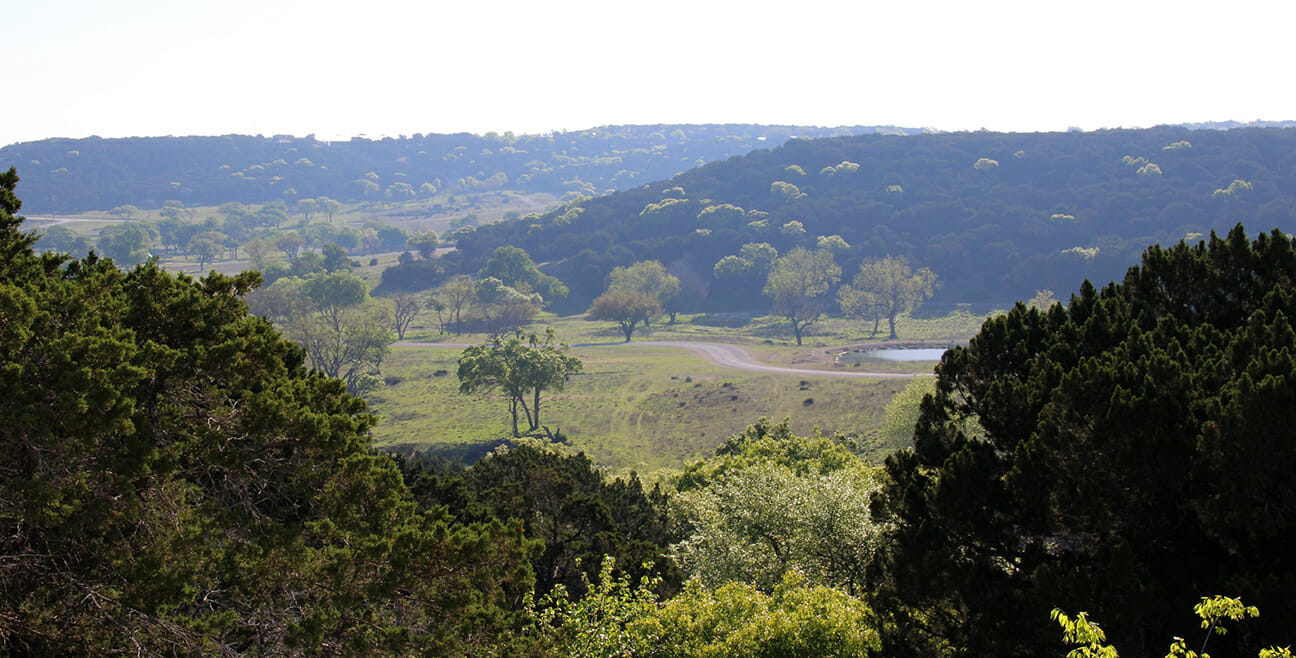 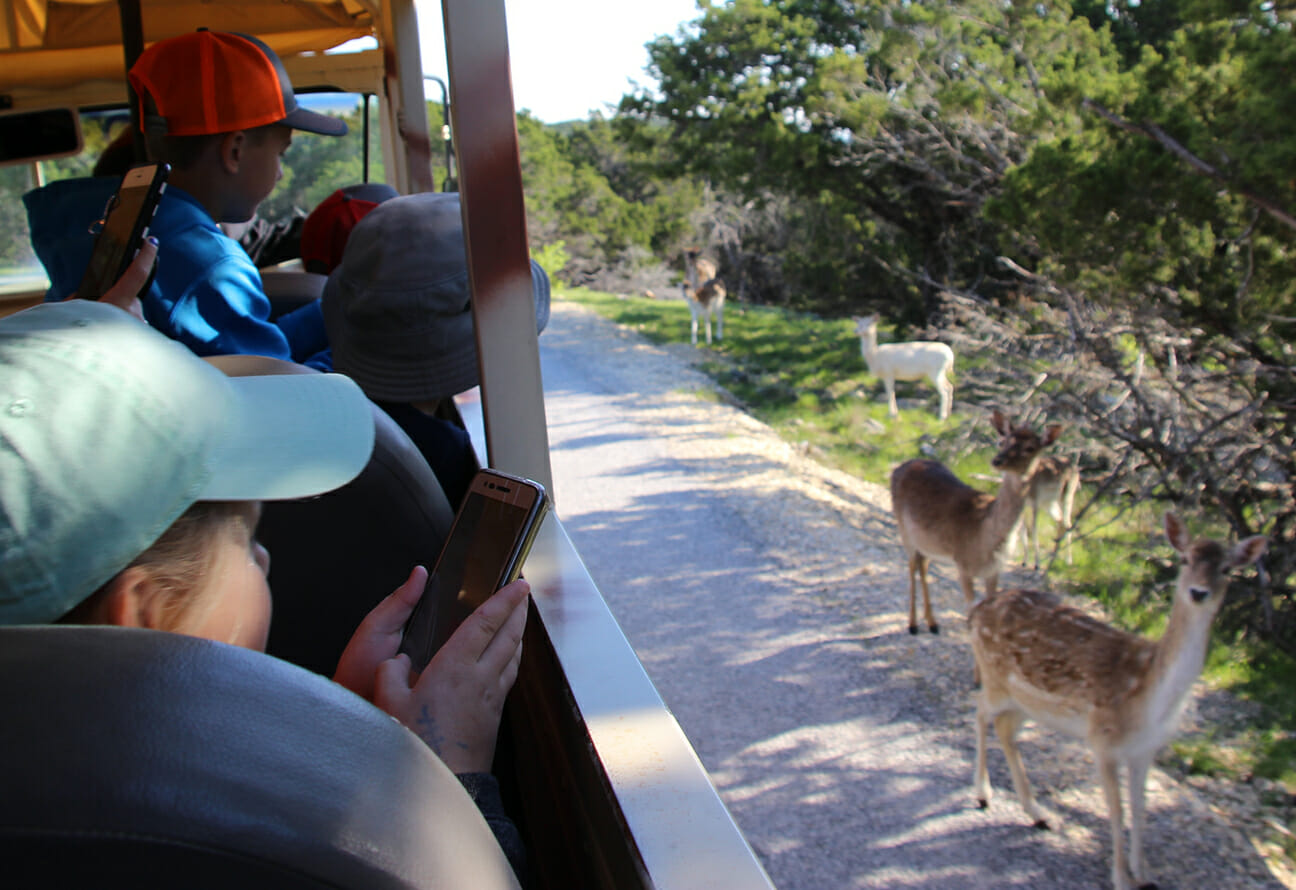 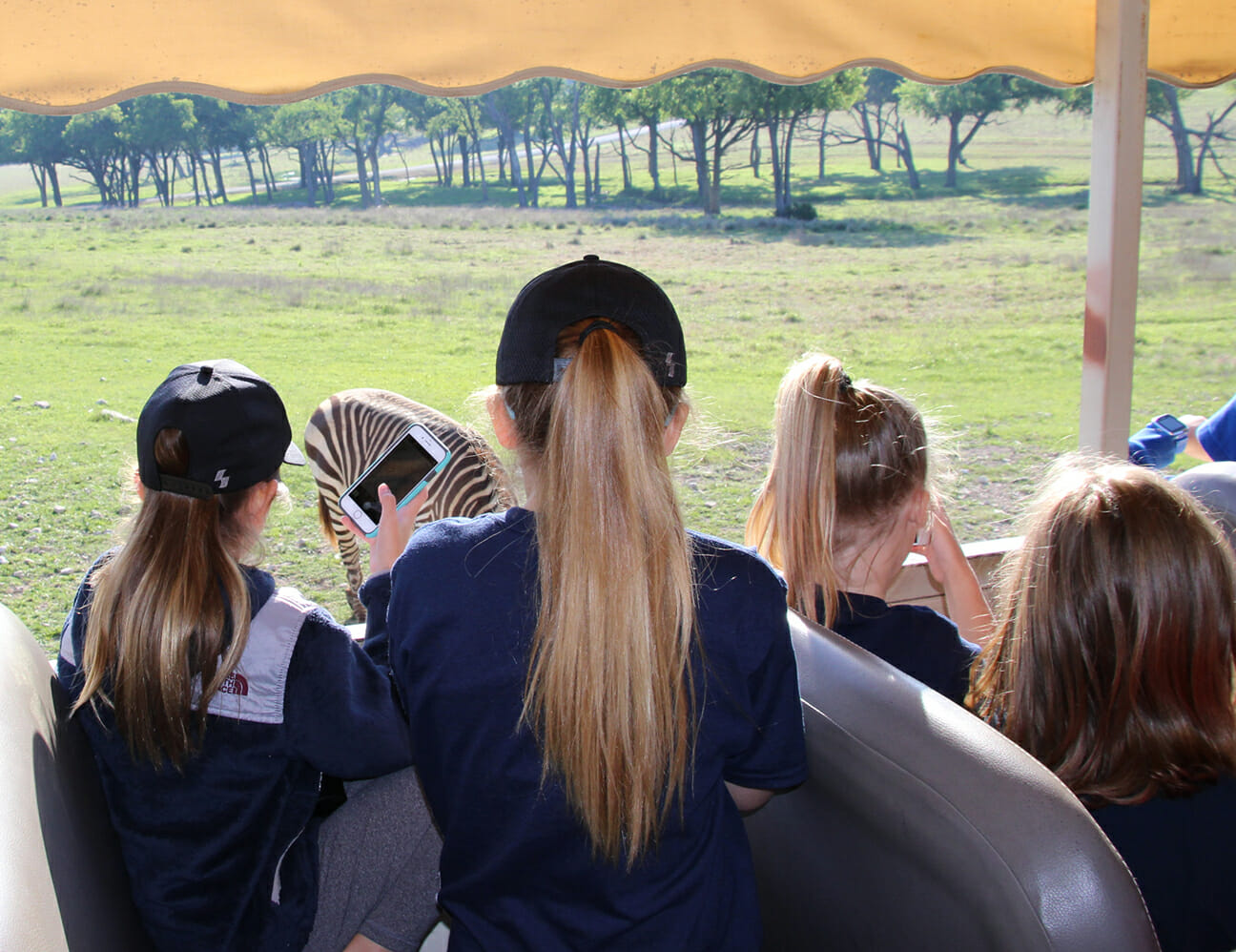 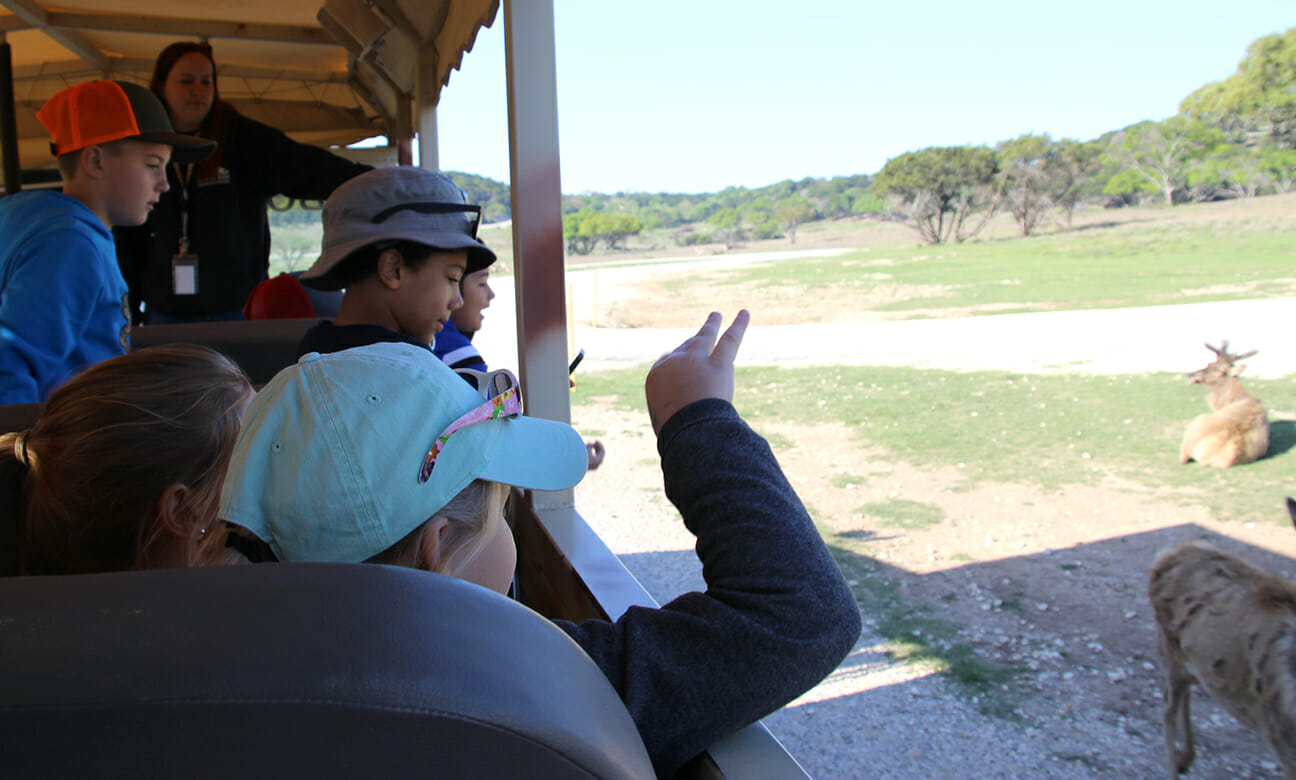 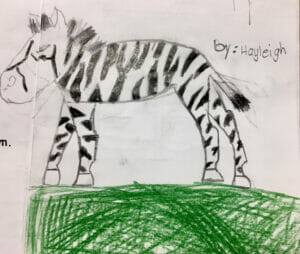 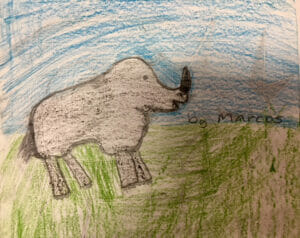 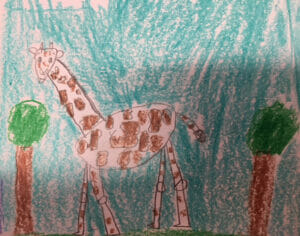 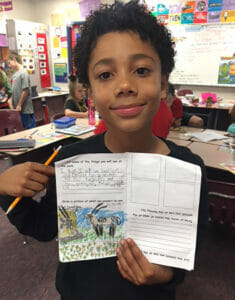 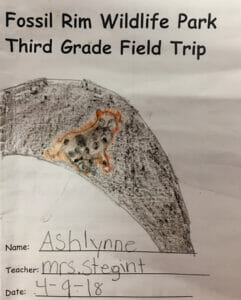 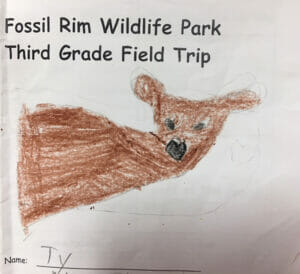 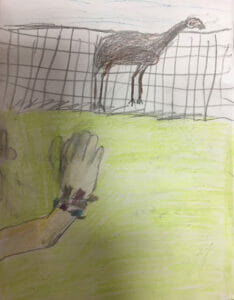 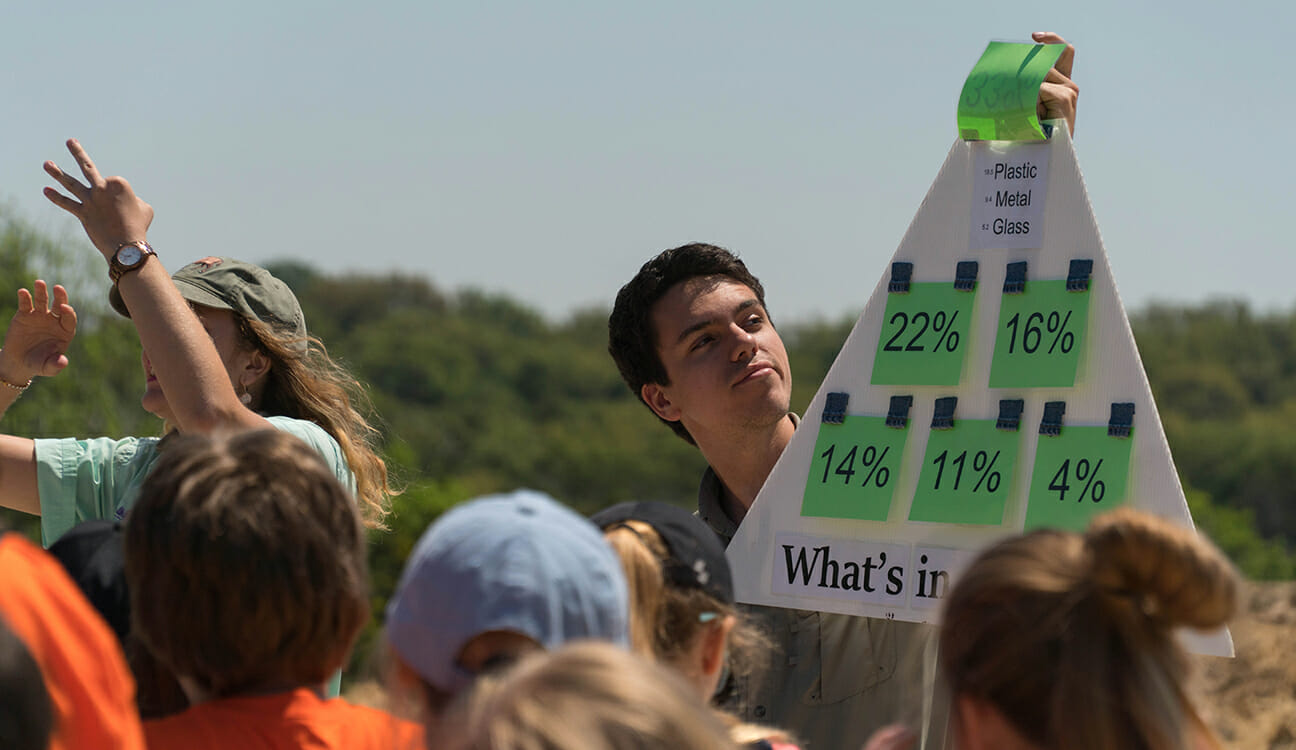