Keep An Eye Out For Sandhill Crane Couple

You may have read that Fossil Rim is home to approximately 1,100 animals. Go ahead and add one more to that population.

In October, a female sandhill crane arrived and has seemingly bonded with our longtime male greater sandhill resident, “Ichabod.”

Ichabod hatched in 1993 and was brought to Fossil Rim in 1994 along with a female crane. According to audubon.org, the lifespan of a sandhill crane can reach 40 years. 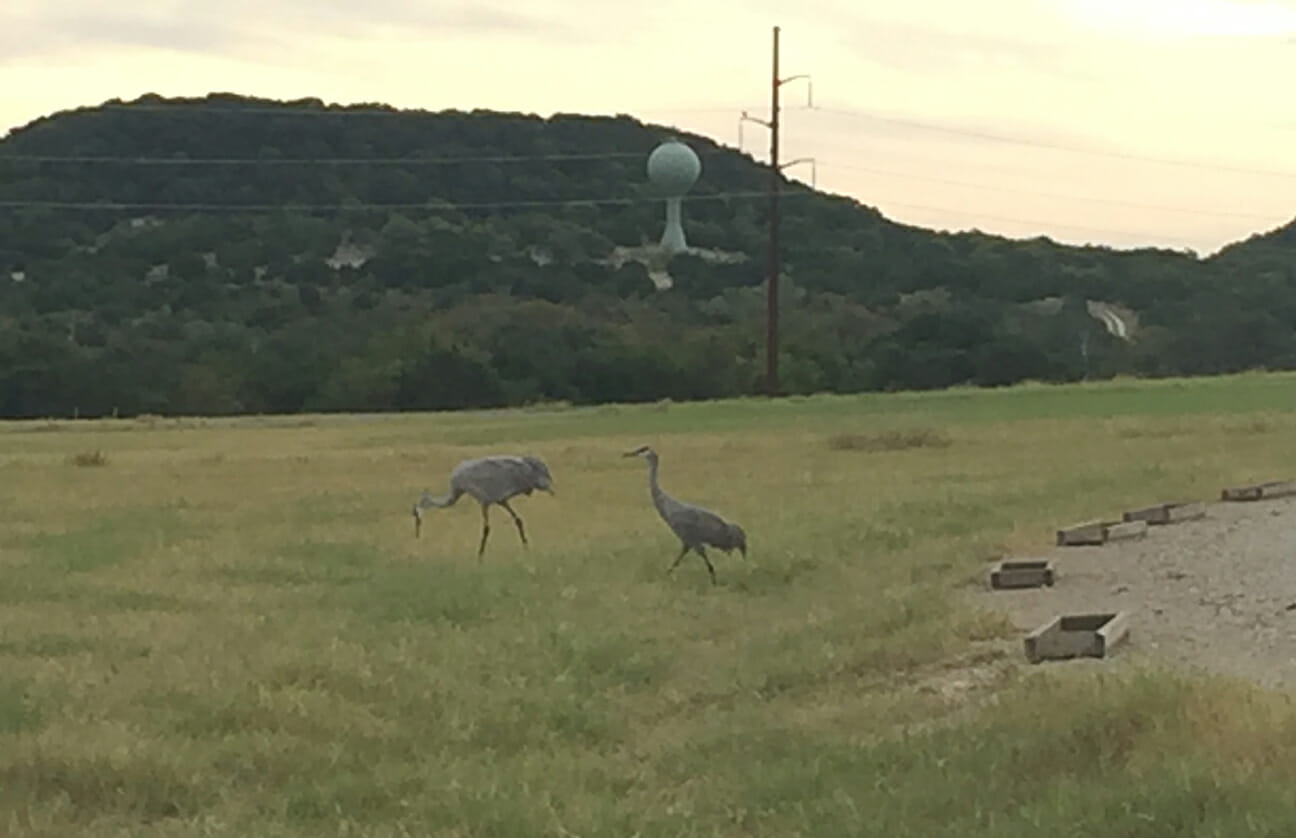 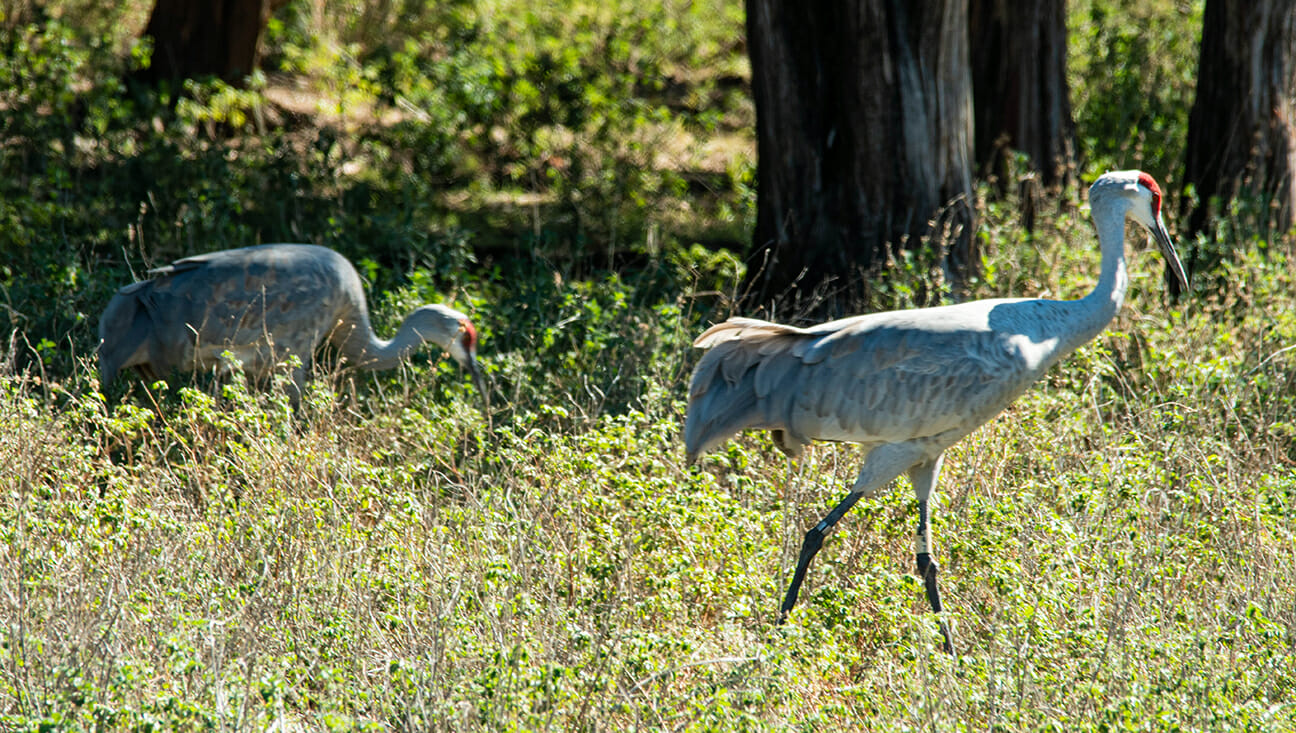 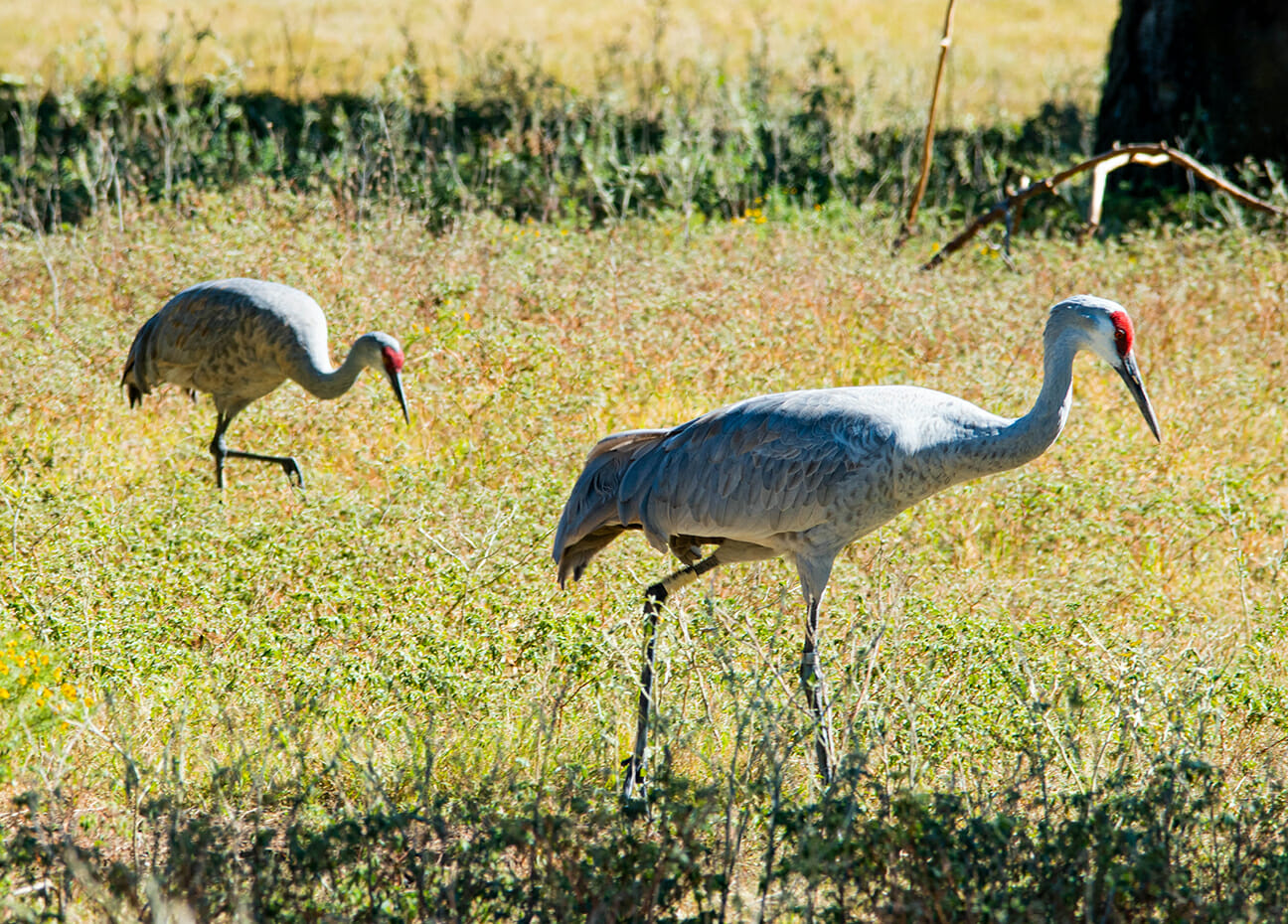 “Initially, we had two sandhills, Ichabod and a female,” said Director of Animal Health Dr. Holly Haefele. “Their primary wing feathers were trimmed so they wouldn’t fly away, but by the time I got here in 2004, we weren’t trimming them anymore and they were staying because they wanted to.”

Almost a decade ago, however, the female disappeared.

“We aren’t sure what happened to her, but it was tragic for poor Ichabod because he did location calls for five weeks looking for her,” Haefele said. “We all assumed that he would leave, because this is a location along their migratory route, and we often see huge flocks of cranes passing overhead each fall. But he stayed, I think, because he realizes he has a good deal going. He has the run of the place; he likes to boss around the emus and the turkeys.

“He gets his food delivered to him personally every morning by our avian staff. They get a pelleted crane diet, plus they eat whatever they find throughout the day. The easy-access pelleted meal ensures (these omnivores) don’t have to work hard to find food.”

Her reference to “they” came back into play in mid-October, when staff saw that the female had arrived and was staying in close proximity to Ichabod.

“She’s a little bit smaller in body size than Ichabod, which is typical for the species,” she said. “This has happened before, as far as other cranes coming in and joining him briefly. But, she’s now been here multiple weeks, and they seem to have potentially bonded, considering they are nearly always together.

“Now, the question becomes ‘Is she going to stay or are they both going to leave?’ We don’t know, but my guess is that Ichabod won’t leave.”

Even when Ichabod was the only sandhill crane at Fossil Rim, he had his own page on the wildlife center’s website: fossilrim.org/animals/sandhill-crane/.

“We consider Ichabod part of our animal collection at Fossil Rim,” Haefele said. “The original pair produced eggs and were occasionally successful in rearing a chick. Then, the chicks would leave with the migrating cranes. I’m interested to see if these two will nest in the spring.

“Historically, Ichabod and his mate have nested on the little island out in the middle of the watering hole beside Foothills Safari Camp. They are ground nesters and susceptible to predation, so being on an island makes them a bit safer. If they do have chicks, it could cement her decision to stay, if she hasn’t committed already.”

The female is definitely less acclimated to humans, as one would expect.

“You can certainly see a behavior difference in those two birds,” Haefele said. “She flees when you approach in a vehicle, but Ichabod sees us as his food truck.”

It is not unusual to hear sandhill cranes at Fossil Rim this time of year, which actually is not a reference to the current sandhill couple on property. Sandhill cranes produce a “loud, rolling, trumpeting sound.”

“This time of year, my brain is trained to be listening for migrating sandhills all the time,” Haefele said. “On a Saturday in October, I estimate that about 600 cranes flew over my home. You hear them before you see them; sometimes, you only hear them. If you hear cranes in this part of Texas, other than sandhills, it could only potentially be whooping cranes, but they are endangered, so it would be really unlikely.”

To her point, there are about 827,000 sandhill cranes in the wild, as compared to approximately 500 whooping cranes.

“Sandhills are the most common of all cranes,” Haefele said. “In harsh contrast to whooping cranes, sandhill cranes have a very healthy wild population.”

One of the key points to know about sandhill cranes is how important migration is to their life cycle. Each spring, 80-plus percent of the world’s sandhill population converges on a 75-mile stretch of Nebraska’s Platte River Valley in advance of traveling to breeding grounds in Canada, Alaska, and Siberia. It is the longest migratory route of any bird at 14,000 miles roundtrip.

“Seeing huge congregations of wildlife, like the cranes on the Platte River, is special,” Haefele said. “Obviously, many years ago there were a lot more species you could find gathering in large numbers across America, but to know that some, such as sandhills, still do is awesome.”

There are a couple of locations in Texas where huge flocks of sandhill cranes converge in the winter. At Muleshoe National Wildlife Refuge northwest of Lubbock, a flock of more than 70,000 will gather. 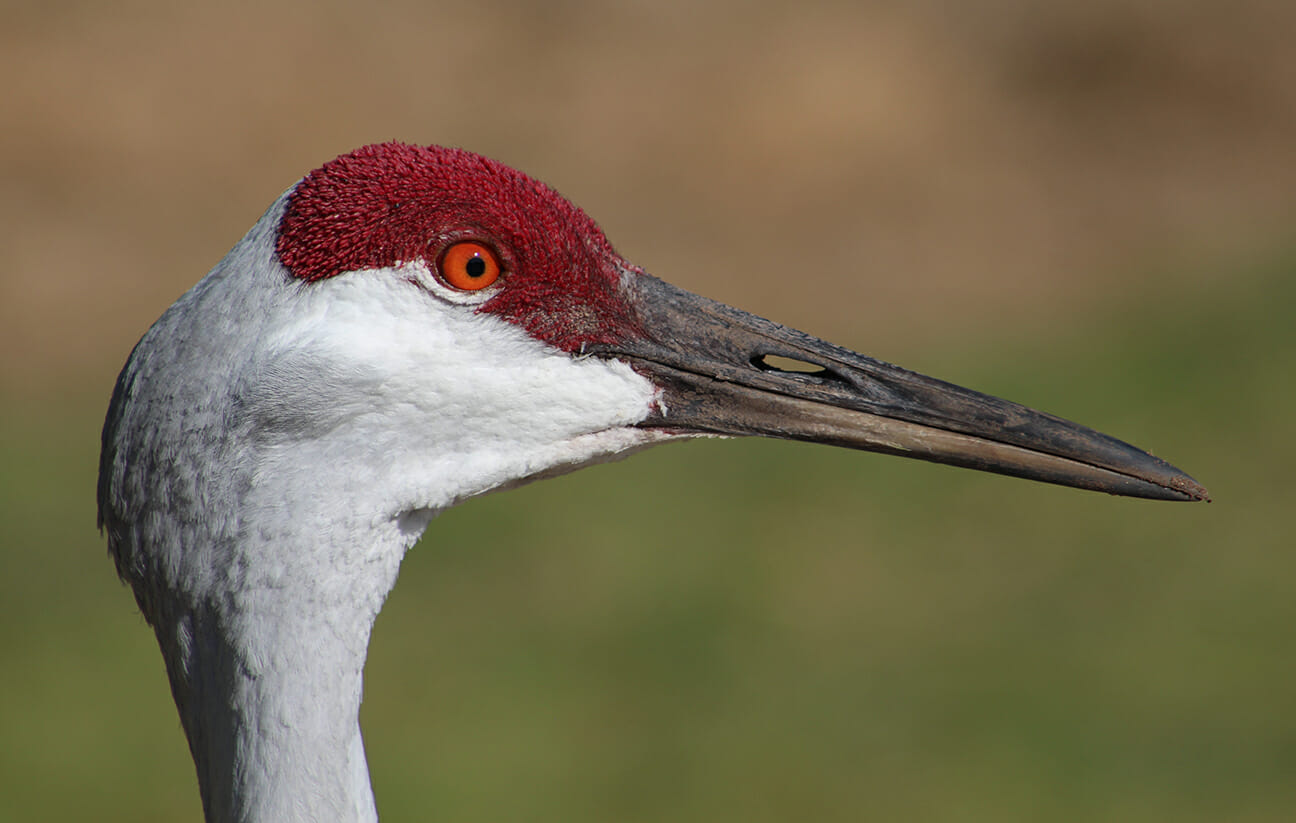 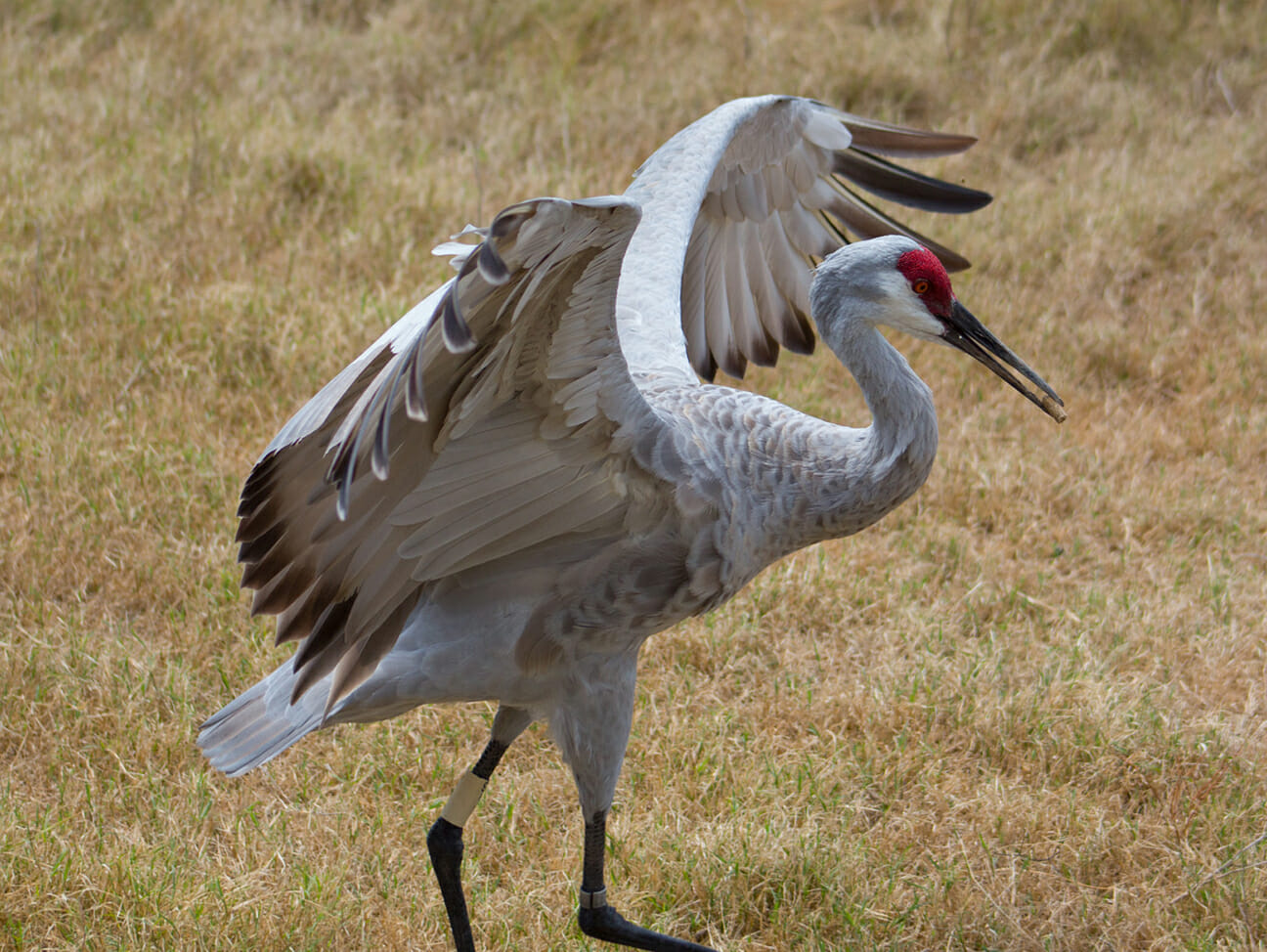 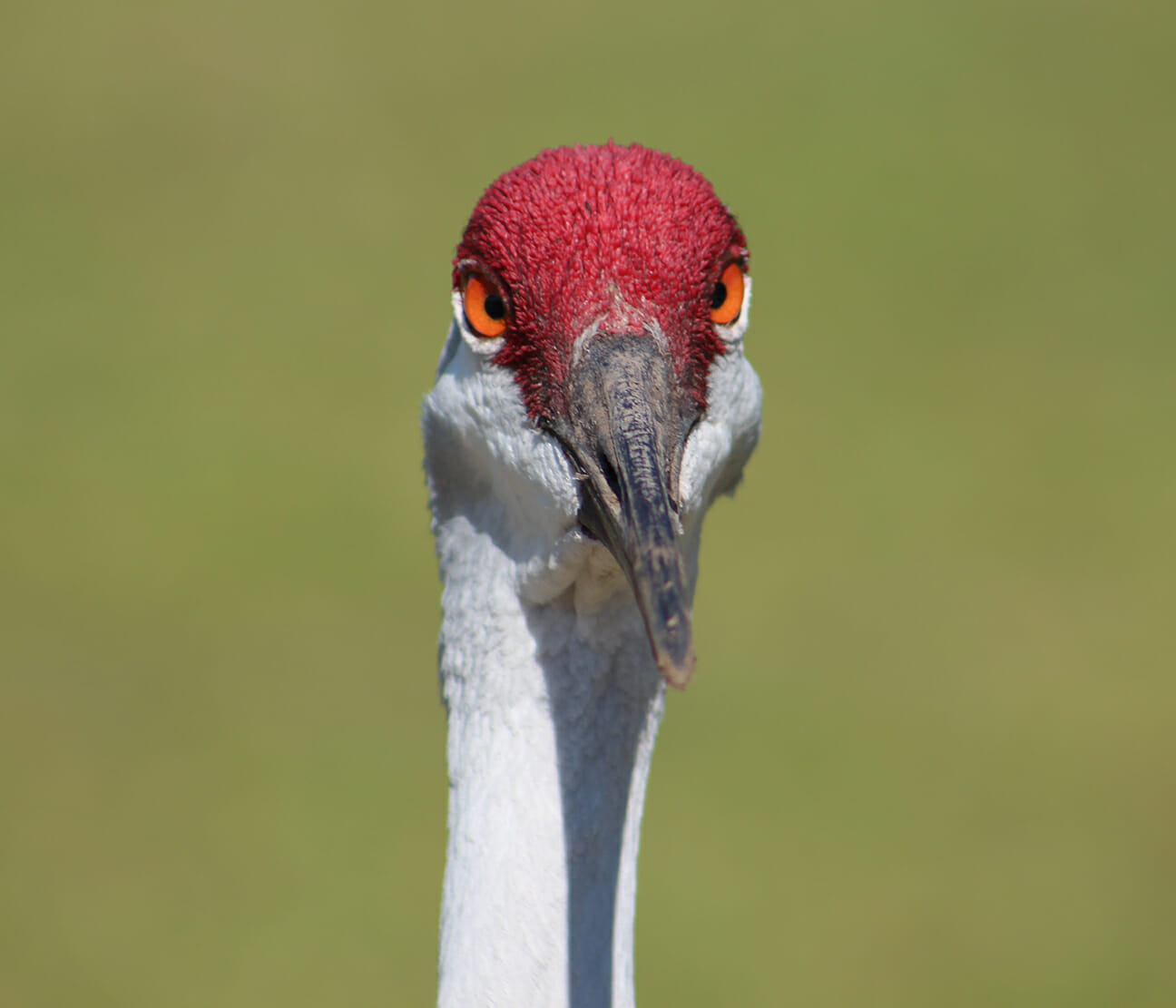 A sedge of sandhills also descends upon Anahuac National Wildlife Refuge, which is east of Houston. And yes, “sedge” is another word for “flock.” More obscure terms for a crane group include “construction,” “dance,” and “swoop,” among others.

“The winter weather here and in Muleshoe isn’t ideal for them, plus we don’t offer the ideal food sources they’d encounter, like marshland invertebrates,” Haefele said.

“Evolutionarily, these cranes are equipped to not have to migrate, so Ichabod’s decision to stay here isn’t a total outlier for his species,” Haefele said. “But, as a migratory species in general, it is a little weird that he chooses to stay.”

Fossil Rim is also home to endangered Japanese red-crowned cranes and vulnerable wattled cranes. Both of these species live beside the adult Attwater’s prairie chickens in the avian portion of the Jim Jackson Intensive Management Area. They can potentially be visited on an Adventure Tour with the permission of the animal care department.

“Both of these species are fantastic, huge birds,” Haefele said. “The wattled cranes can reach five feet tall and are beautiful with striking plumage. When you consider the endangered species at Fossil Rim, red-crowned cranes are definitely in that select group. We do health exams on our cranes, but they are pretty easy to care for, barring unusual circumstances.

“We have breeding pairs of both species, but are still working for our first chicks. Crane species are known for their courtship dances, and they mate for life. In Ichabod’s case, something happened to his mate, so he was open to finding a new one.”

Haefele said, while the sandhill pair will fly to all Fossil Rim pastures, they are most likely to be seen in either the Main Pasture or Buffer Pasture. For guests driving through in their own vehicles, those are the third and second pastures, respectively.