In June 2021, IRF Executive Director Nina Fascione visited Fossil Rim to update staff on the five species and what her organization is currently working on. Fossil Rim Director of Animal Care Adam Eyres, who serves on the IRF board, introduced Fascione for the presentation, as she began by explaining the challenges of in-situ conservation during the COVID-19 pandemic.

Most of IRF’s work is done in Africa, India, and Indonesia, all of which are still entrenched in a worse battle with COVID-19 than what America is currently facing.

“We’ve had the IRF Reserve Relief Fund active during the pandemic, and officials from several reserves in Africa said the funding saved them,” Fascione said.

For anyone involved in rhino conservation, poaching activity is always being monitored.

The motivation for poachers comes from the exorbitant amount of money that rhino horn fetches in some East Asian countries. Customers incorrectly believe the ground-up horn has medicinal value, while some see it as a status symbol due to its high cost.

With an estimated population north of 3,600, the greater one-horned rhino has an increasing population trend. Its IUCN population classification is “Vulnerable.” 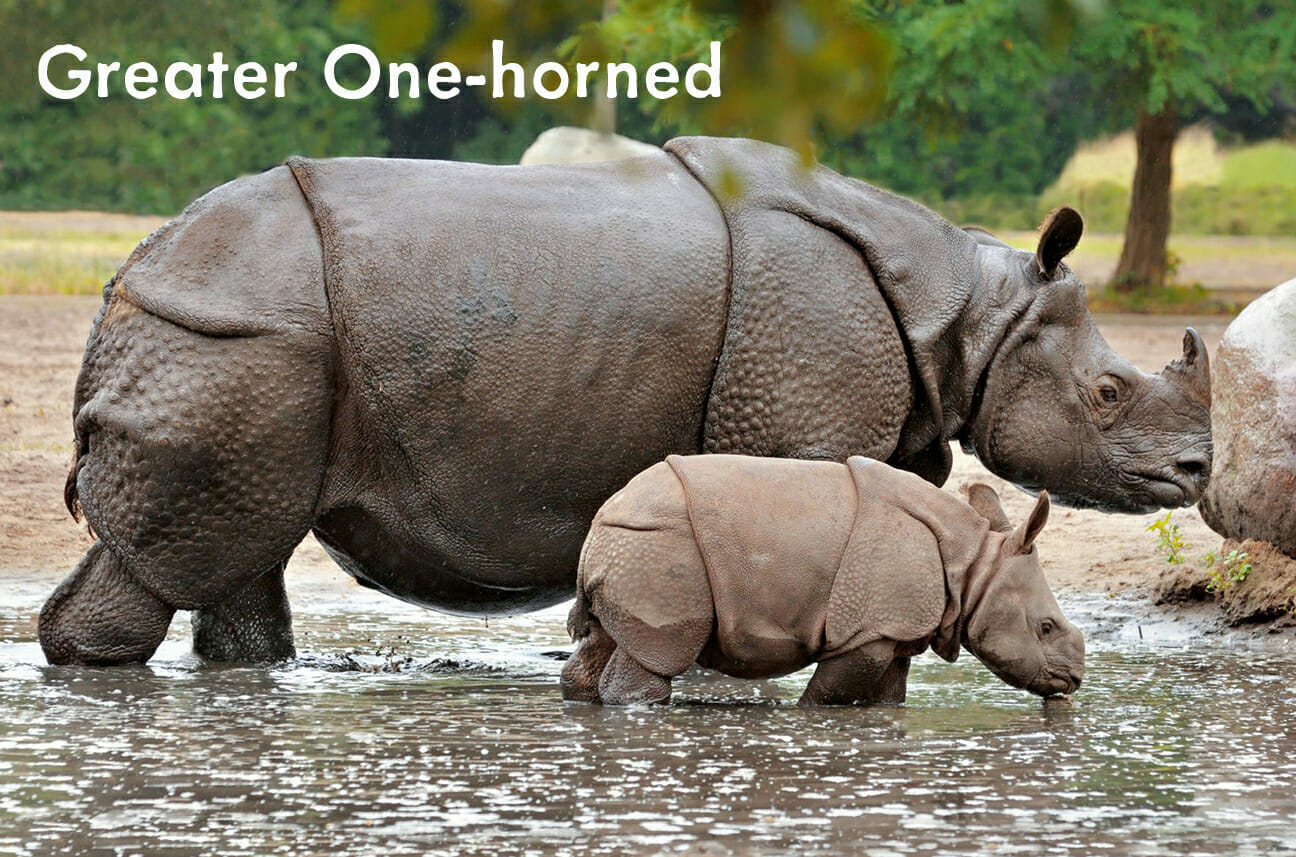 Fascione discussed Indian Rhino Vision 2020, which has proven to be a successful program. Launched in 2005, the goal was to increase the country’s greater one-horned rhino population beyond 3,000 by 2020.

“The species population is steadily increasing, and poaching is down due to great cooperation and coordination between forestry officials and local and national government officials,” Fascione said. “In fact, only two greater one-horned rhinos were poached in Assam, India in 2020.”

The Sumatran rhino population is thought to be less than 80. The species has a decreasing population trend and a classification of “Critically Endangered.”

Fascione said two Sumatran calves were born in the Sumatran Rhino Sanctuary over the past decade. They are the first Sumatran rhinos born in captivity in Indonesia, offering hope for future breeding programs that could build new wild populations. 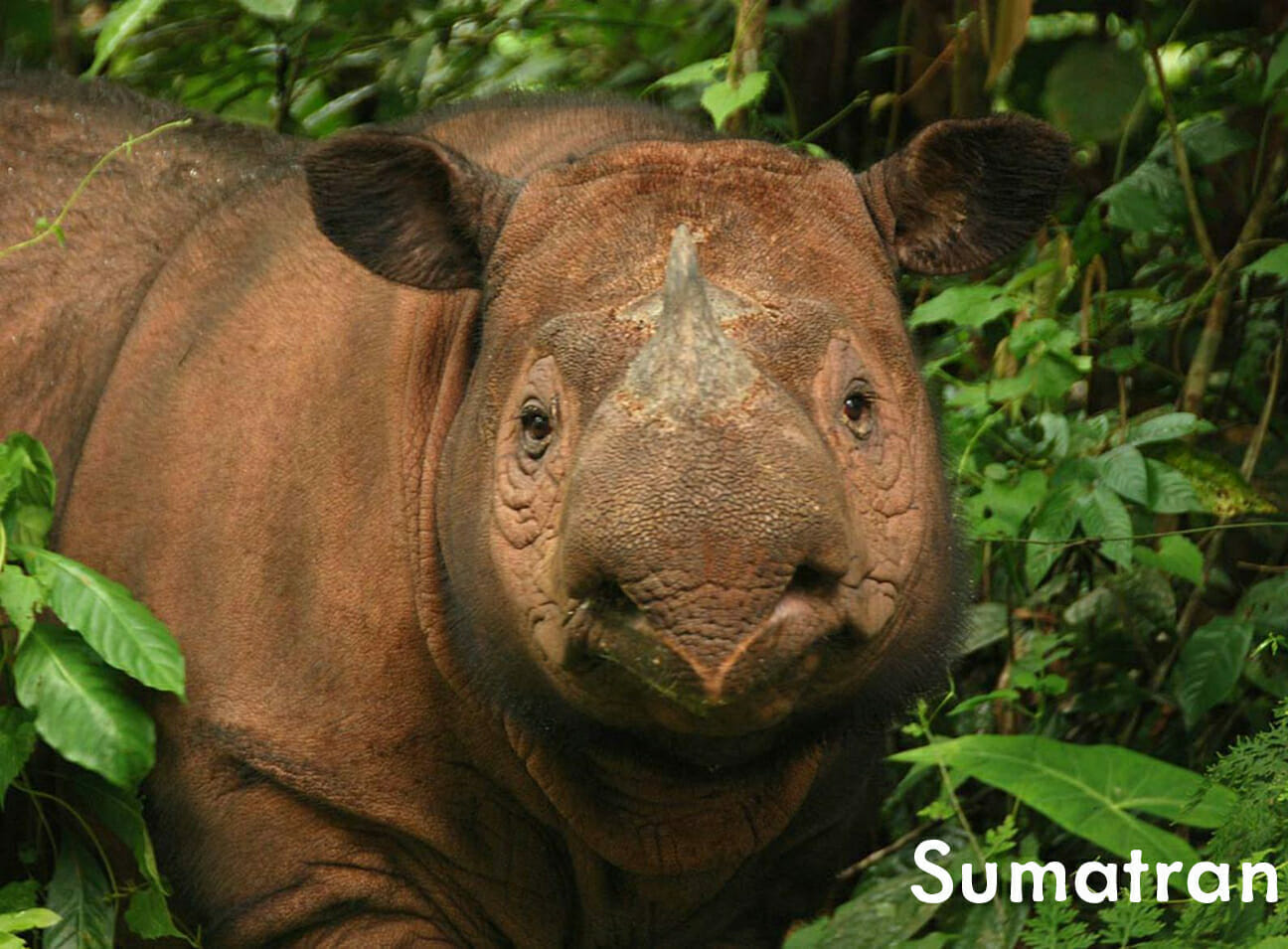 “IRF is also working to replant degraded rainforest in Way Kambas National Park in Sumatra,” she said. “More than 22,000 seedlings were planted by local farmers and, thanks to a beneficial rainy season, have grown rapidly. Wildlife, including birds, deer, pangolin, and tapir have already begun to return to the area, providing hope that rhinos will roam this land in the future.”

Rangers must stay vigilant watching for poachers and other threats to rhinos and other wildlife, as they will sometimes set fires to restoration areas as a distraction. When people are busy trying to battle the fires, poachers will go elsewhere to an area that is not being protected at the time.

“Sumatran Rhino Rescue, which is an alliance with the government of Indonesia and other NGOs (nongovernmental organizations) for the survival of the species, has seen its efforts to capture and relocate rhinos into managed breeding facilities delayed by the pandemic,” Fascione said. “It is crucial that these programs continue, and members have been working to prepare for when they can be started.”

Javan rhinos are also classified as “Critically Endangered,” but at least they have a stable population trend.

“Unlike Sumatrans, which are very difficult to get a population assessment on, we know there are approximately 73 Javan rhinos,” Fascione said. “The remaining population lives in Ujung Kulon National Park (UKNP), where they are heavily guarded by Rhino Protections Units. You could even say the population trend is positive, but with slow growth.” 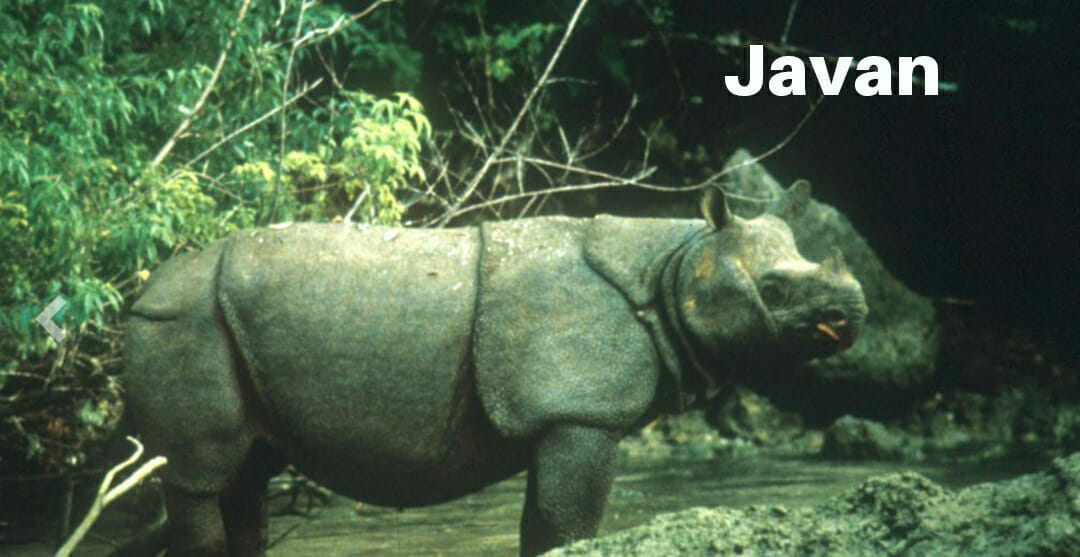 Habitat restoration efforts are also a priority for this species.

“In addition to continued protection, habitat management is critical to the success of the Javan rhino,” Fascione said. “Arenga palm is a fast-growing, dominant plant species that naturally occurs in UKNP, but it chokes out other native plant species – including the rhinos’ preferred food plants. The Arenga palm removal program has been successful in increasing suitable Javan rhino habitat, allowing for wider movement of the population.”

Fascione briefly discussed white and black rhinos, which Fossil Rim staff are much more familiar with compared to the other species.

White rhinos have a population of approximately 18,000 with a decreasing trend and a classification of “Near Threatened.” Though this species has the largest population by far, it is also under the heaviest poaching pressure by a wide margin. 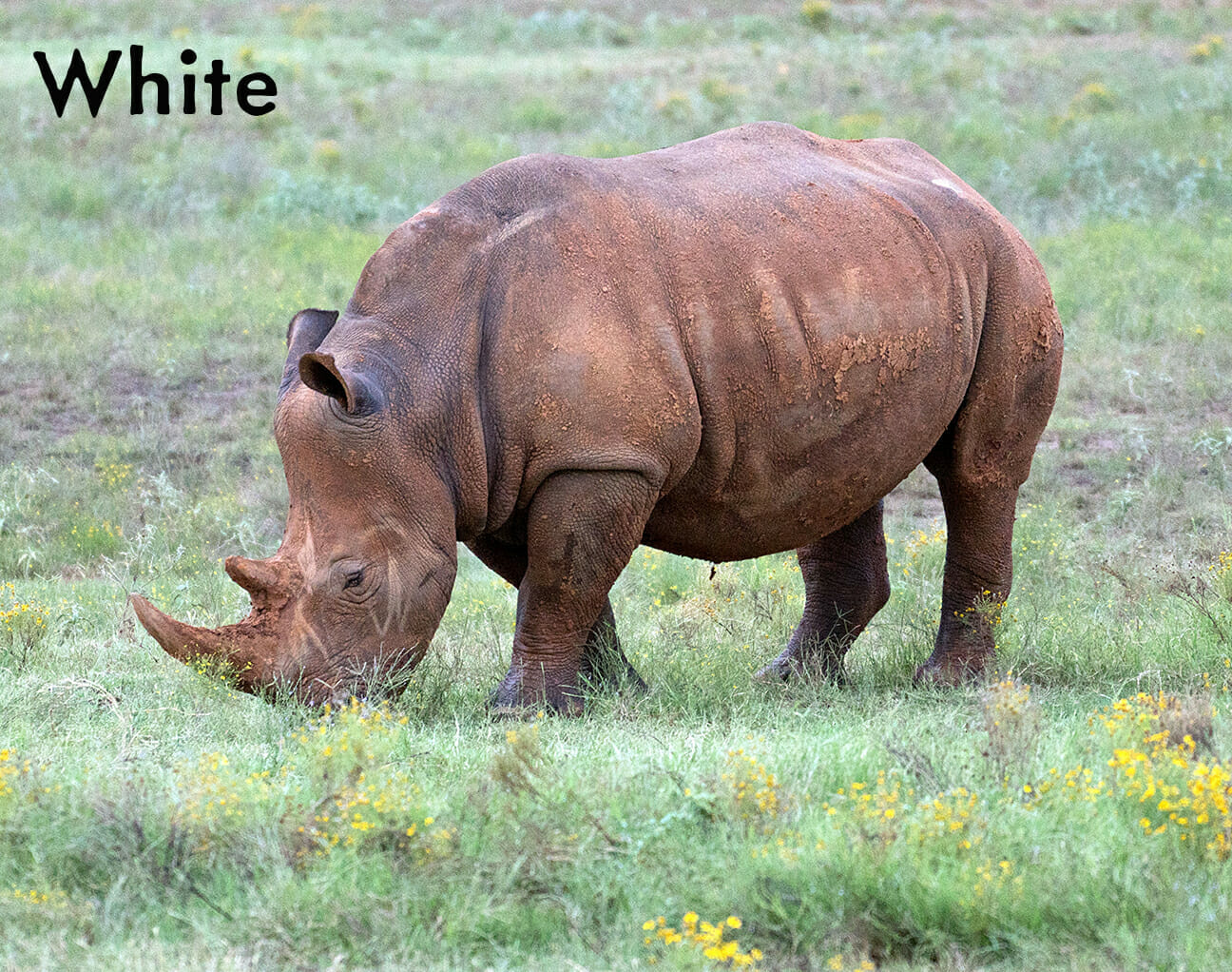 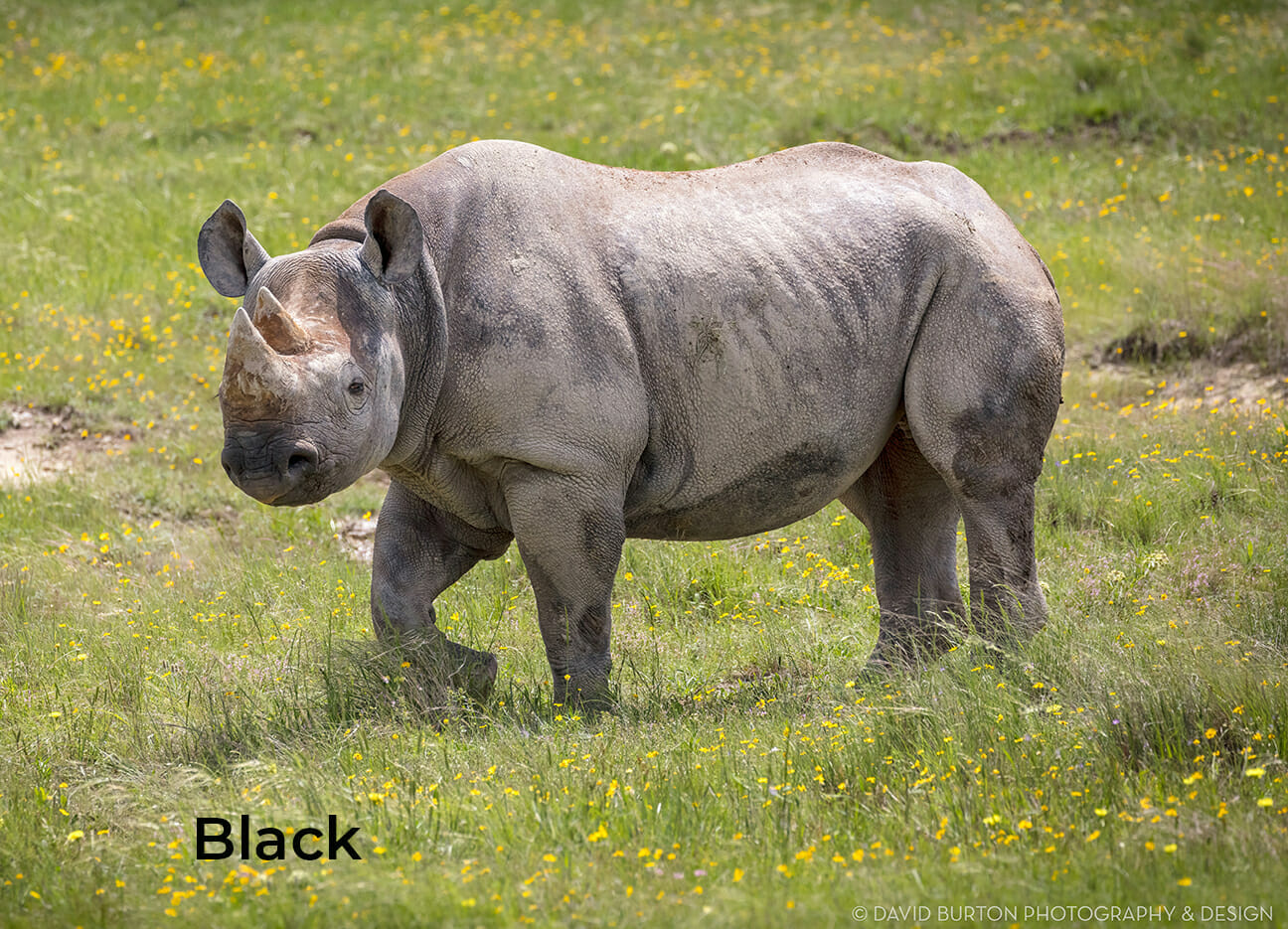 Black rhinos have a population of about 5,630 with an increasing trend and a classification of “Critically Endangered.”

You can learn more about the status of all five species on the IRF website: https://rhinos.org/about-rhinos/state-of-the-rhino/.

“Donations from countries without native rhino populations are crucial to rhino conservation,” Fascione said. “IRF has a section of suggestions on our website – https://rhinos.org/help-rhinos/ways-to-give/ – for how people can help.”