Conservation of wildlife requires an understanding of animal social organization. Investigating this for the addra gazelle is particularly important, both because the large numbers of this critically endangered species kept in Texas are a safeguard against extinction and because reintroduction efforts to bolster the vanishing wild populations in Africa will draw from captive stock. 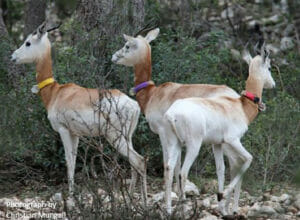 When latches opened on the GPS radio collars worn by addra gazelle in a 499-acre Texas pasture, this finally opened a window on details of their lives for the past year-and-a-half. Fossil Rim Wildlife Center has joined with Bisbee’s Fish & Wildlife Conservation Fund to facilitate analysis of the 26,000-plus pasture locations recovered from the collar data packs.
The 52-page project report takes readers through the initial explanation and results – methodology, maps, habitat preferences and associations. Thanks to Fossil Rim’s contribution, a further analysis is underway into the details of group preferences, space relationships, travel patterns and key incidents with impact on social dynamics.
Fieldwork had three phases. First, the monthly visits for health checks monitored an established group of six grown females, one adolescent male and a young adult male, plus a new adult female added at the start. Next, only the females and their young male were in the pasture.
Stage three followed this same group with the young male now becoming adult, plus three new adult males added. Thus, three different social combinations were represented during fieldwork. The Second Ark Foundation, operating in collaboration with the Exotic Wildlife Association, thanks Fossil Rim Wildlife Center for joining with project sponsor Bisbee’s Fish & Wildlife Conservation Fund to allow the present analysis phase to make full use of the data.
-Dr. Cary Mungall, Principal Investigator for the Addra Gazelle GPS Collaring Project & Second Ark Foundation Science Officer