Following up on the blog discussion of Front and Buffer Pasture feedings each morning, it is time to turn our attention to the other two pastures among the big four at Fossil Rim.

Becca McLachlan, Animal Care Specialist – Hoofstock, is a great source of knowledge on just about all herbivorous animals at Fossil Rim, so she was ready to discuss the Main Pasture and Game Preserve. Arriving at Fossil Rim in 2013 as a Black Rhino Intern, McLachlan made her return on February 28 in 2016 to join the hoofstock staff.

Before we head into those pastures, McLachlan talked about working at Fossil Rim in the springtime.

“The most obvious and exciting reason to enjoy spring at Fossil Rim is that calves are being born,” she said. “Most of the species will calve during the spring months. We stagger them a bit, if possible, so they aren’t all born in one month. Otherwise, it could be overwhelming for animal care staff trying to find all of the babies and do neonate exams.

“For example, scimitar-horned oryx usually start calving in February, gemsbok start in March, addax start in April, etc. Spreading out the births in the spring gives calves the best chance. New greenery is coming up and the temperature is warming.

“The plant life is lush right now and all the wildflowers are visible. You don’t want a calf to be born in the middle of winter; that’s just a harder life.”

Like most animal care staff, McLachlan wants to find out what she can learn just by observing the animals.

“I enjoy seeing all the behaviors that go with mother-calf interactions, seeing a big group of calves tucked together, and seeing them explore their new environment,” she said.

While it is convenient for this article, morning is definitely her favorite time on the job.

“Morning is the coolest time of day; most of the animals are out, which is a key reason why we feed at that time,” she said. “It’s the best time for us to get a good look at everybody. Who is getting close to calving, who has calved? Morning is the best chance to count the herds; are we missing anyone?

“They could be off calving or might not feel well. Is anyone hesitant to eat? These animals could be behind the group that is coming up for the feed.

“Are the animals walking fine or are they limping? Are there any injuries where we need to notify our vet staff?”

When guests enter Fossil Rim after paying at the Admission Center, they progress through the Front Pasture, Buffer Pasture, and then into the Main Pasture.

While Fossil Rim has been closed, animals are not approaching the road as often. McLachlan talked about what to do in that case as she went to find and feed the waterbuck. 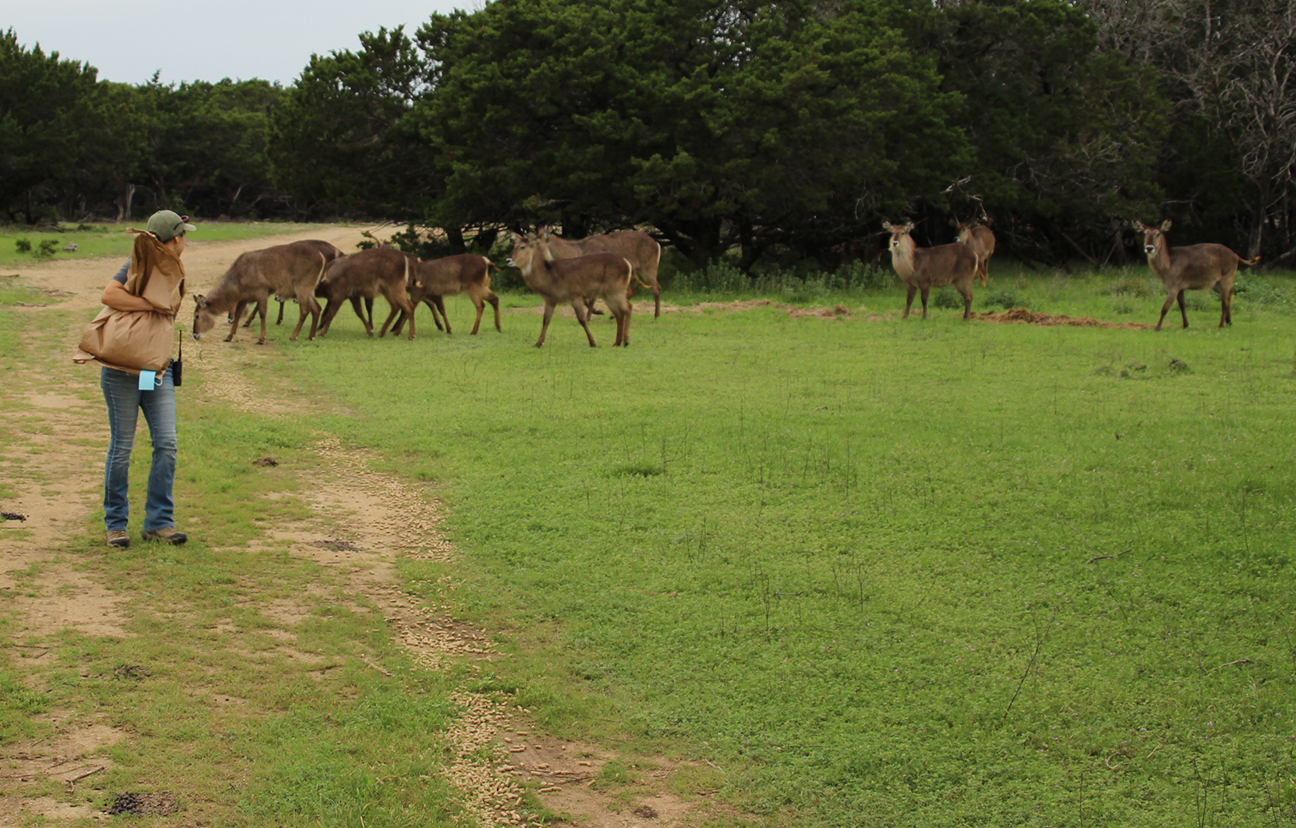 “Usually, if animals don’t show up to the road, it means they are not hungry,” she said. “They know what time and where breakfast happens. If it’s cold, we’ll usually just feed animals where they are.

“If it’s raining, we might feed in the sheds. Or ideally, we wait for a break in the rain so you don’t push the animals out from under their shelter.”

As for the species hierarchy at feeding time, she did not have to think about which Main Pasture antelope to lead off with.

“Sable are at the top and that’s easy to see,” she said. “Wherever we feed first is where the sable eat; they’ll push off any other species there. So, wherever we want the sable to be is where we feed first. If we want to give the herd a dewormer treatment, for example, it’s fairly easy to manipulate where they’ll be.

“Sable get feed pellets in wooden troughs (like the Buffer Pasture antelope). We’ll move the troughs around, but usually somewhere around the vet clinic. We don’t want guests to feed the sable because of their aggressiveness, and the other animals witness it firsthand, as well.”

A couple of desert-adapted antelope were next up in the hierarchy.

“Gemsbok are probably next, but it can come down to individuals,” McLachlan said. “For example, some gemsbok can be flighty and will get pushed off by addax. So, addax are pretty close and definitely in the top three.

“Then deer, followed by waterbuck. They will usually share, but if a herd of deer come up, the waterbuck might just decide to go to the next feeding station. Among the deer – axis, fallow, and white-tailed – while-tailed are the most skittish and we don’t see them come up as often.”

There are feeding stations, or spots where feed is distributed, in Main Pasture. However, those locations can be adjusted more than any other pasture. On the other hand, the feeding stations in Front Pasture are relatively set.

Just because McLachlan sees the species jockey for position on occasion does not mean efforts aren’t made to mitigate conflict. 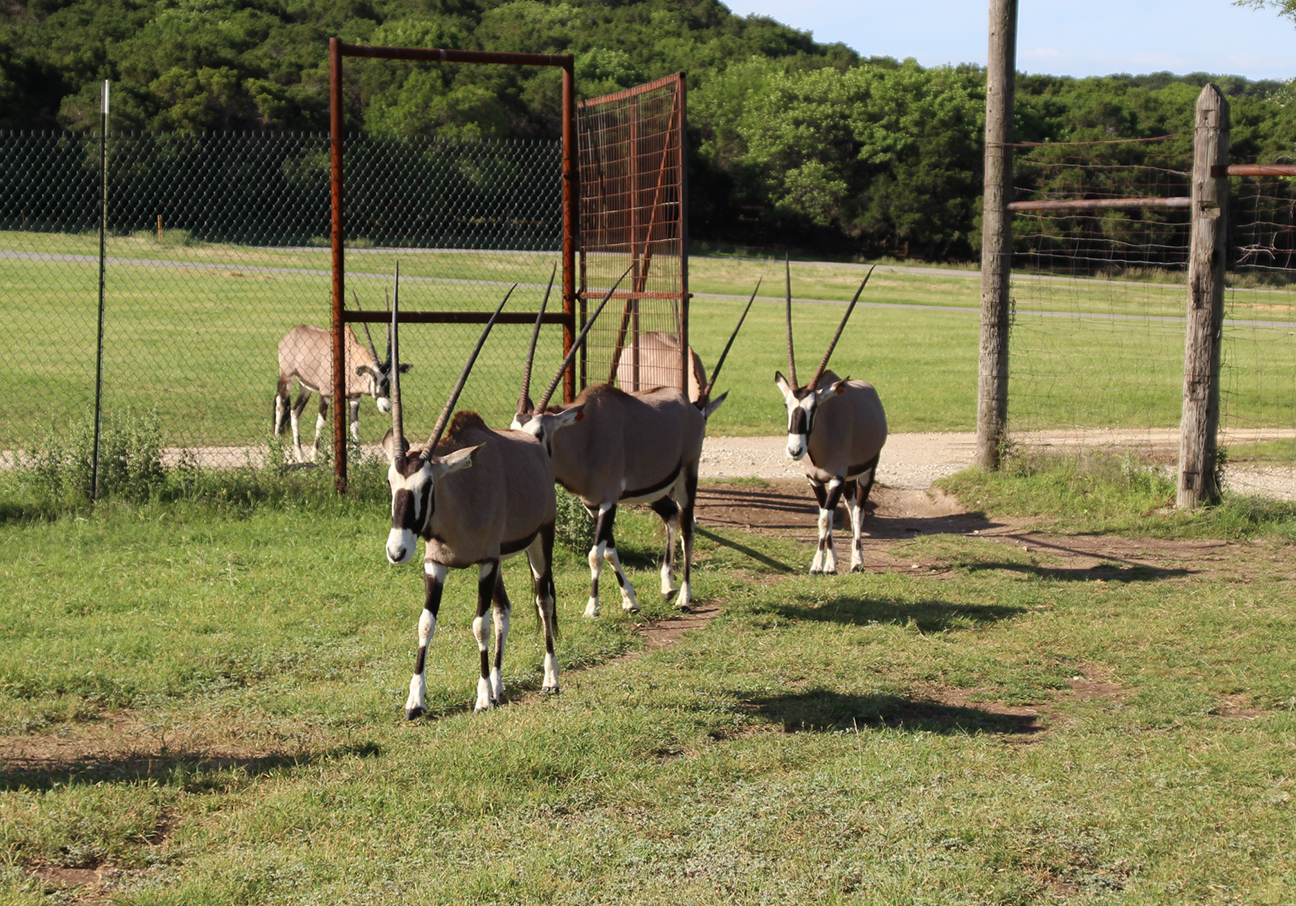 “We are pretty strategic about how we feed in Main, especially when it comes to the gemsbok,” she said. “We’ve had past issues with gemsbok, for whatever reason, just running through the stations to get to the last station. They’ll push off the waterbuck, so it isn’t a bad thing that waterbuck have a habit of following the truck to the next station for a new chance.

“We spread out the feed with very long feed lines so as many animals as possible can get in there. We spread the various lines themselves out through the pasture loop and in a direction away from where we are going to feed the waterbuck – try to pull the gemsbok away from them.

“We might also spot feed the waterbuck, especially if it’s later in the day and they are off by themselves. We watch their body condition, and fortunately (undereating) hasn’t been an issue.”

Other than feed pellets, the animals of the Main Pasture get round bales of coastal hay.

“All pastures except Buffer get coastal hay – including the private pastures for the American bison, Grevy’s zebras, and Przewalski’s horses – and it is especially important in the winter,” McLachlan said. “Main Pasture goes through the most round bales. We might drop 6-7 bales in that pasture at once and continually restock as needed.”

In addition to a pair of sandhill cranes that roams from pasture to pasture but can primarily be found in the Main Pasture, McLachlan often sees native animals in Fossil Rim’s largest pasture.

“I see a lot of (black-tailed) jackrabbits,” she said. “Also a lot of turkeys, red-tailed hawks, and turkey vultures, plus (nine-banded) armadillos and roadrunners.”

Why place the feed pellets on the paved Gosdin Scenic Drive, at least when they are not poured into troughs?

“It’s our most readily available clean, dry, flat surface,” McLachlan said. “You always want a dry surface to prevent the pellets from disintegrating. (European) red deer (in the Game Preserve) don’t care and will eat anything, but we have some very picky antelope like addax and gemsbok. I try to avoid pouring feed on sections of road that I know have more rocks, but generally feeding on the road makes it easier for the animals to pick up the pellets. Another benefit is drawing all the animals up to the road so we can see them easier without searching.”

Feed pellets at Fossil Rim either consist of 14 or 17 percent protein.

“Usually, Front, Buffer, and Main get 17 percent in the winter,” she said. “In spring, we transition to 14 percent. Game is always 14 because we have equids; we don’t want their hooves growing faster than they can wear them down. The main species we do hoof trims on are sable and aoudad (in the Game Preserve).”

“We only feed two bags of pellets on the ground in the Game Preserve,” McLachlan said.

Accordingly, she had to think harder when asked about the dominance hierarchy.

“This is trickier because some of the animals don’t typically come up for feed, like the (Hartmann’s mountain) zebras,” she said. “When the zebras do, they seem to get the pellets they want and the other animals don’t mess with them. The male aoudad seem to be ahead of the red deer.

“The red deer are the most reliable animals to come up and eat off the road in the Game Preserve. They are almost always at the four-way (intersection) in the morning waiting for you to show up with food.”

There is one bontebok in the pasture and he always seems to be content just to fit in with whatever species he is with at the time. On this particular morning that McLachlan was interviewed, he was on the outskirts of the red deer herd eating pellets with them.

Among species that tend to come to the road for feed, McLachlan mentioned one more – new arrivals from late 2019.

“The Nile lechwe are at the bottom of the hierarchy,” she said. “They are timid and usually only come up to eat if there is enough space and the other animals have moved off. The bull will initiate the approach if he sees a gap in the feed line.”

The pasture’s giraffes are fed away from the road, so they do not factor into that equation. Even so, there are a couple of species that are not afraid to join them.

“When the giraffes are eating, sometimes the red deer will come over to the feed tower – usually in the winter,” she said. “They like to munch on the bits of alfalfa that fall from the tower, so the red deer stags can be a little pushy. We like to keep the tower platform out of their reach, but that can be tricky when we want to lower it for the giraffe calves. Sometimes, the Arabian oryx will come over looking to eat the fallen alfalfa and can be a little sassy.”

Every now and then, she might see one species get testy with another.

“If any species in this pasture sometimes looks for conflict, it would be the Arabian oryx,” she said. “If they want food and somebody else is in the way, they are the most likely to get pushy.”

As mentioned earlier, round coastal hay bales are fed to these animals.

“Everyone on the hoofstock staff can put out round bales,” she said, which is done using a tractor. Director of Animal Care Adam Eyres also can if needed.

“We put out more in winter,” McLachlan said. “Staff checks all of the locations and we figure out how many are needed in each area. Square bales are only for rhinos and animals in the wooden holding pens, but rhinos will be given the round bales sometimes.”

Beyond feed pellets and coastal hay in the Game Preserve, the other food staple of note is the alfalfa given to the giraffes. As she mentioned, some other animals love to eat it when they see an opportunity.

Generally, the only Fossil Rim herbivores fed twice per day are giraffes and both species of rhinos.

“Occasionally, the animals in the holding pens are fed twice a day, especially equids,” she said. “Entire pastures are only fed twice in really cold weather.”

Many staff members have a favorite animal species they work with, but the selection was too difficult for McLachlan.

“I really have a hard time choosing; I love spending time with all of them,” she said.

On the other hand, she did not need time to think about suggesting when guests should visit.

“Especially in the summertime, coming early will be your best chance to see the animals in all the pastures,” she said. “It’s cooler, and that’s when we’re feeding. Later in the day, they’ll be heading towards the shade.”

The Key to Conservation

The Key to Conservation