The blue-and-gold macaw is the largest member of the parrot family, and has striking, colorful feathers, as their name suggests. Their wingspan can reach up to 43 inches, though they will climb more often than not and only fly to cover long distances. When in flight, these birds can reach a speed of 35 miles per hour.

Blue-and-gold macaws are common in rainforests in Mexico, Central America, and northern South America. Because of this, they are able to use their beak as a "third foot" to help them climb on and around the densely packed vegetation. A wild macaw is somewhat omnivorous, eating everything from seeds to lizards. Their powerful beak is used to crack open objects such as the tough nuts and seed pods they love to consume.

In the wild, macaws play an essential part of maintaining growth in the rainforest. After they eat, anything they defecate helps to scatter seeds that eventually lead to new growth.

Macaw populations are being threatened due to habitat destruction and large scale trapping for the pet industry. Still not truly domesticated, macaws are popular as pets due to their beautiful appearance and ability to mimic. Although they are intelligent and eager, these birds are also extremely strong and destructive, and need a very large living space. This makes them a poor choice for the typical pet owner.

This bird lives at the Children’s Animal Center.

VIEWING TIPS
Like the other birds at the Children’s Animal Center, the macaw is very used to people and will probably be easy to see if the weather is decent. 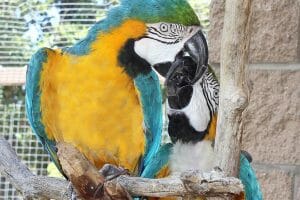 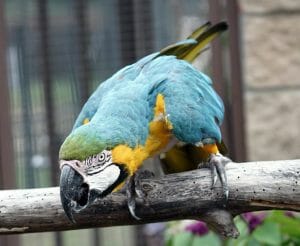 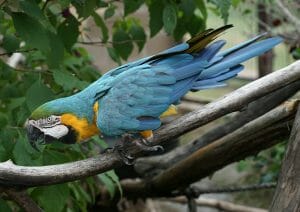