Business Is Booming At APC Facility

There is definitely activity to be found at the Attwater’s prairie chicken (APC) facilities within the Jim Jackson Intensive Management Area as of late March, but the hustle and bustle will rise to an entirely different level as April progresses.

Cara Burch, Senior Animal Care Specialist – Avian, gave a status update of what she, Avian Curator Janet Johnson, and the rest of the staff is up to with April on the doorstep.

“We are trying to get everything ready for chick season,” she said. “Our roosters are booming and some of the hens are laying, while others are getting ready. We are collecting our first eggs, so the Ted & Mary Eidson Prairie Grouse Incubation Center has been completely cleaned, disinfected, and ready to go. We’ll have chicks at the end of April.

“We are also doing a lot of flight pen maintenance, such as mowing and trimming. Once the hens start laying eggs, there will be no more mowing and trimming in their area. So, we want to keep the grass short in the pens until their first eggs arrive.”

The life of a young APC is all about advancing through various stages. Burch explained what that entails.

“The breeding pairs are put together in late February,” she said. “Some of the males started to boom (mating dance and call) then, and by late March, we still had about a half-dozen males that hadn’t started yet. The first eggs arrive in late March. April is the biggest egg month, and eggs are laid into May. 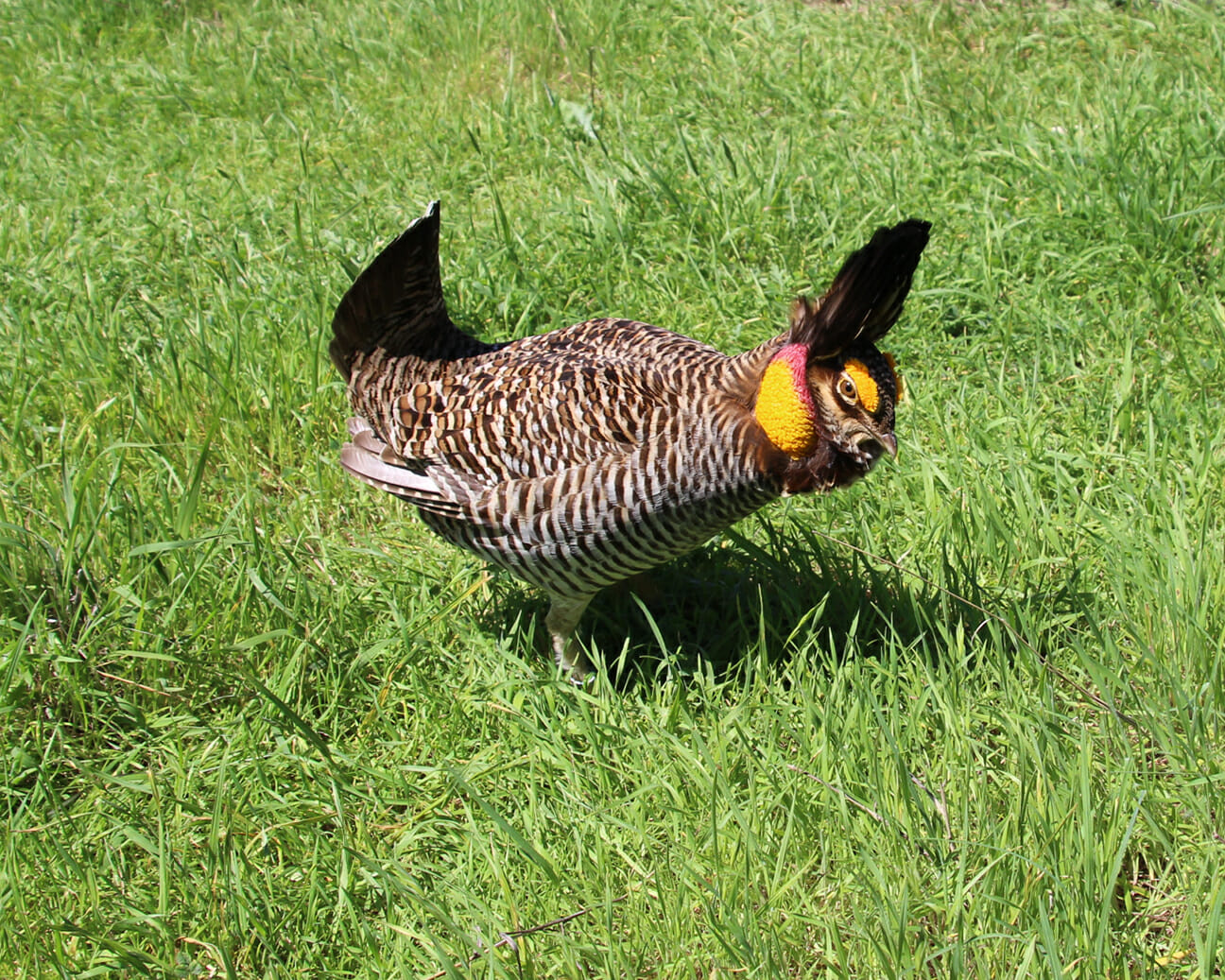 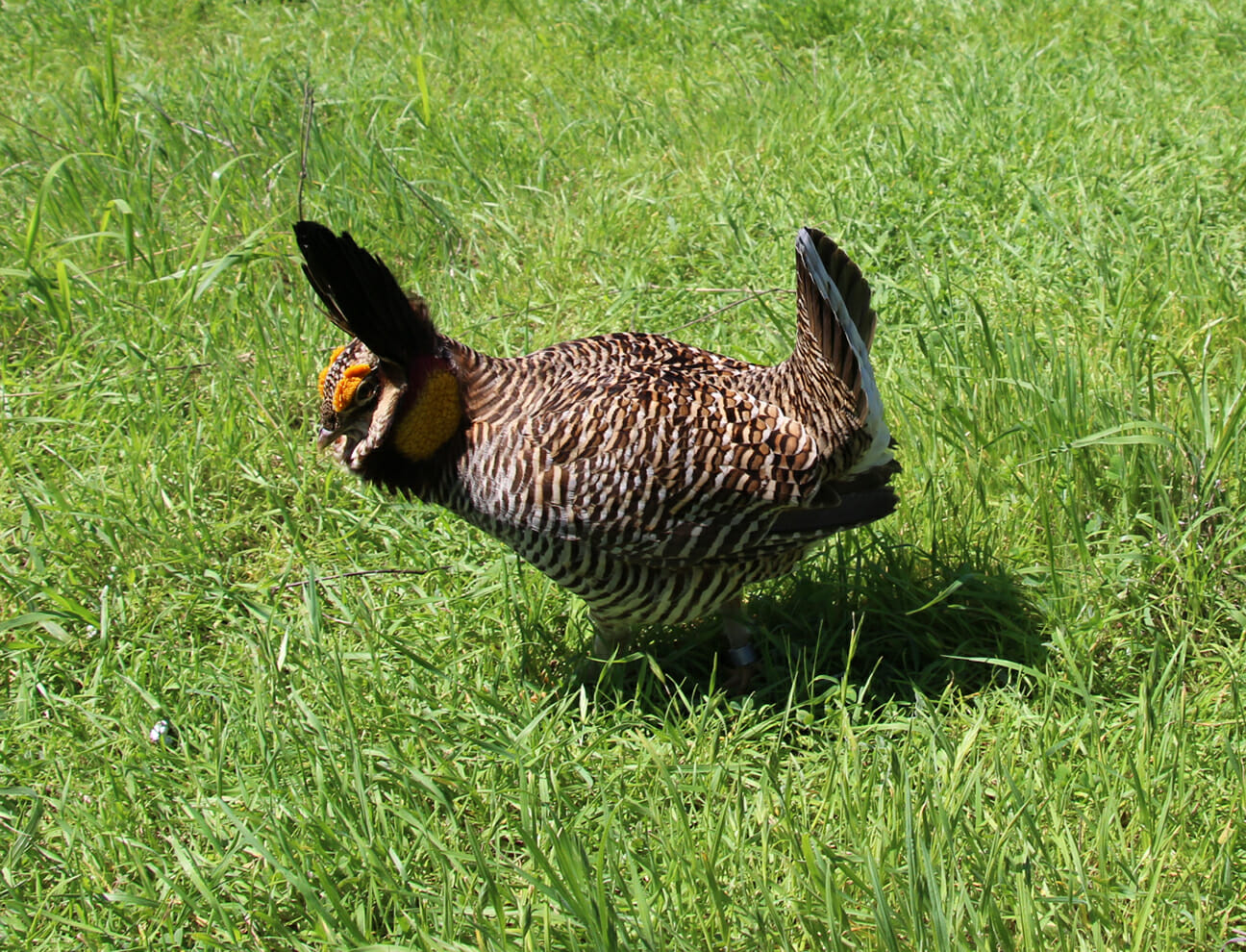 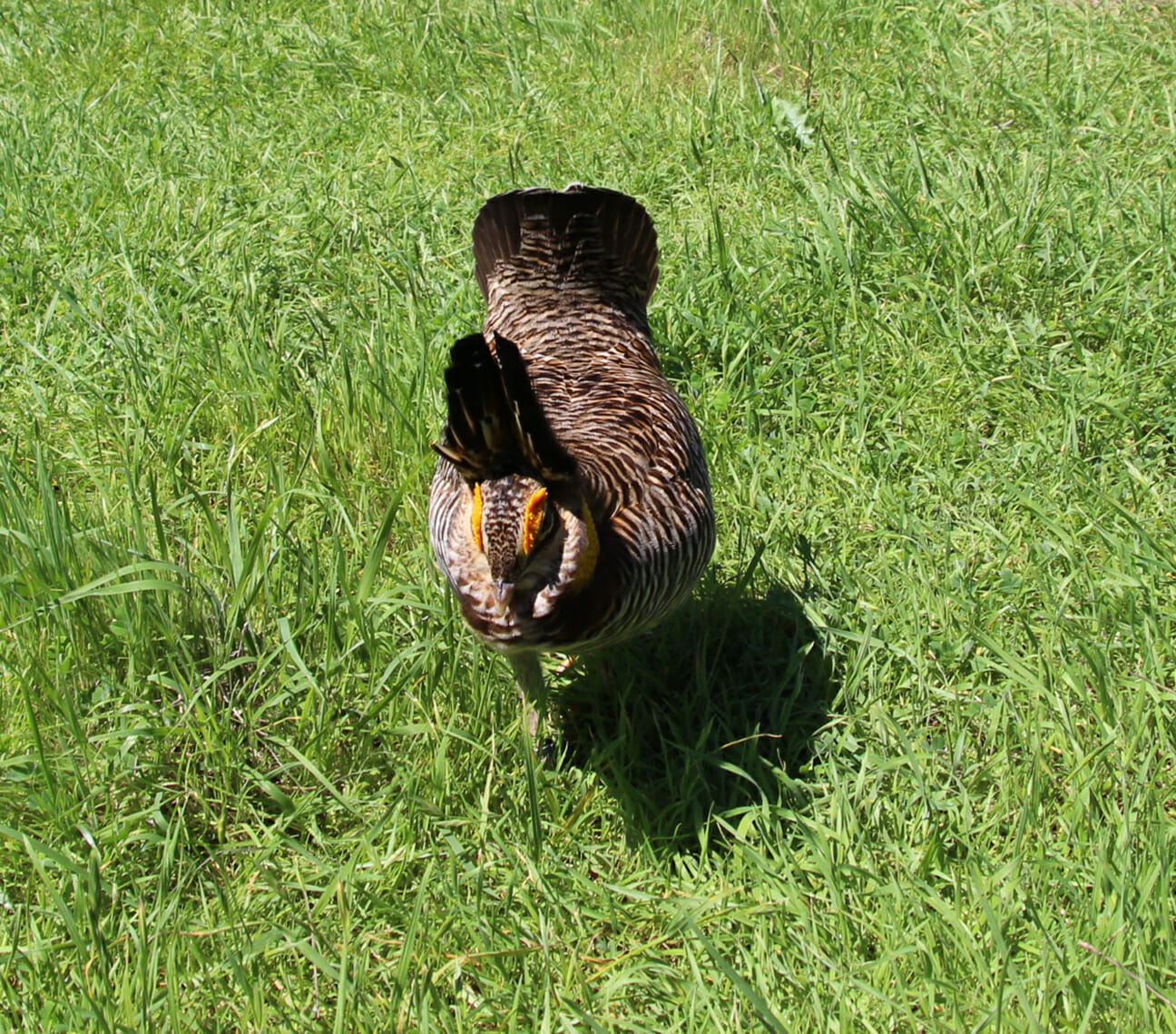 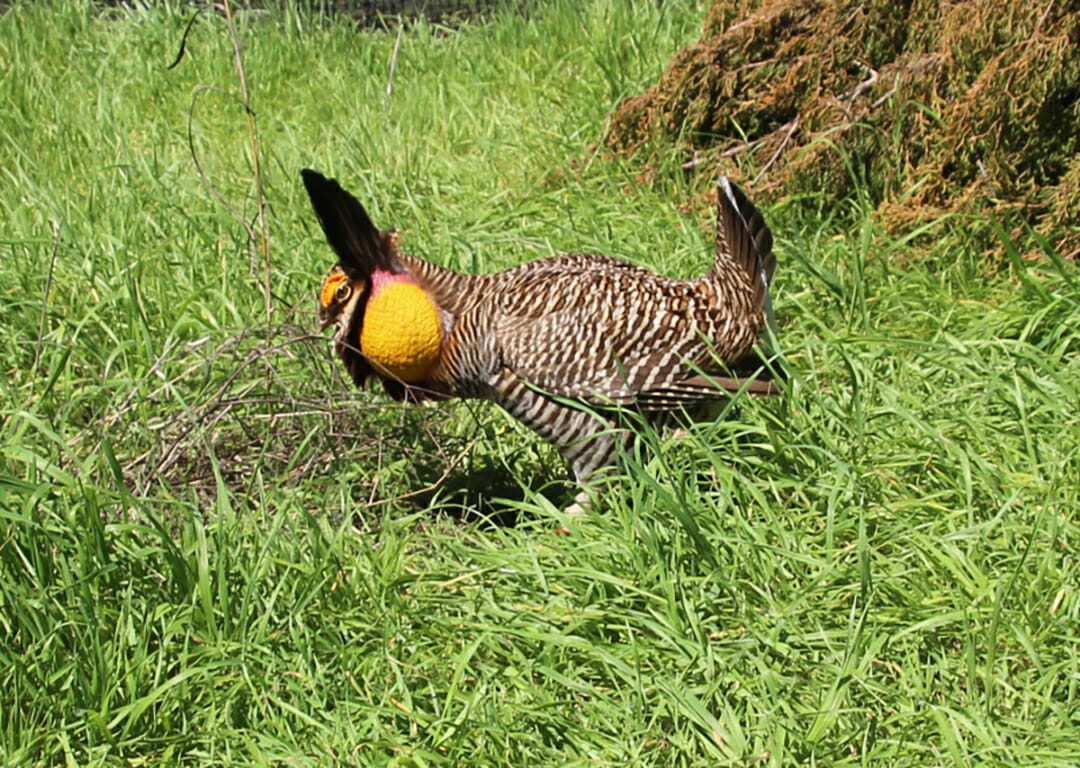 “Most hens will lay one egg per day. We collect eggs every other day, depending on weather. We collect data with every egg – weigh, measure, clean, and log into a database – and then take them into the incubation building. Eggs can be put into storage for up to six days at a cool temperature.

“When Janet has a collection of eggs that she deems large enough, she starts their incubation all at once and it will last 26 days. Ideally, that entire group hatches at nearly the same time.”

When a chick hatches, that is known as “day zero.”

“After hatching, a chick goes to the chick building and into the brooder room,” Burch said. “After two days, it goes across the hall into the stacker room. Once a chick reaches a weight of 45 grams, usually at 10-14 days old, it moves outside into one of the small chick pens. 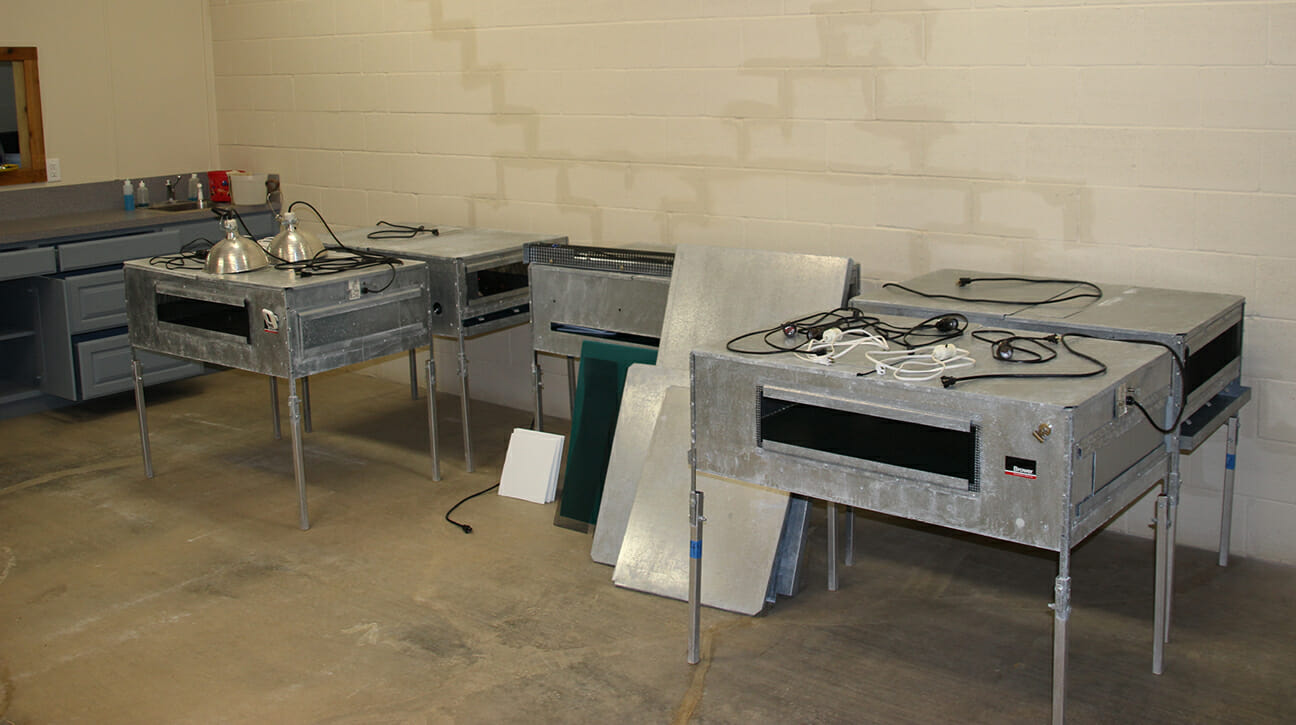 There is something particularly interesting about the criteria for a chick to advance out of the stacker room stage.

“This is the one stage where weight is more important than age,” Burch said. “Our biggest challenge is getting the chicks to eat and grow. We could have a seven-day-old chick that is half the size of a four-day-old chick, because one of the two figured out how to eat and then grew quicker. We try to get them to eat when they are in the brooder room, but you see most begin to eat in the stacker room.”

When a chick advances to a large grass pen, if it has been selected to leave Fossil Rim, it will remain there until biologists from the Attwater Prairie Chicken National Wildlife Refuge arrive to pick it up, along with many others. The most genetically valuable APCs are more likely to remain at Fossil Rim to maintain the captive population. 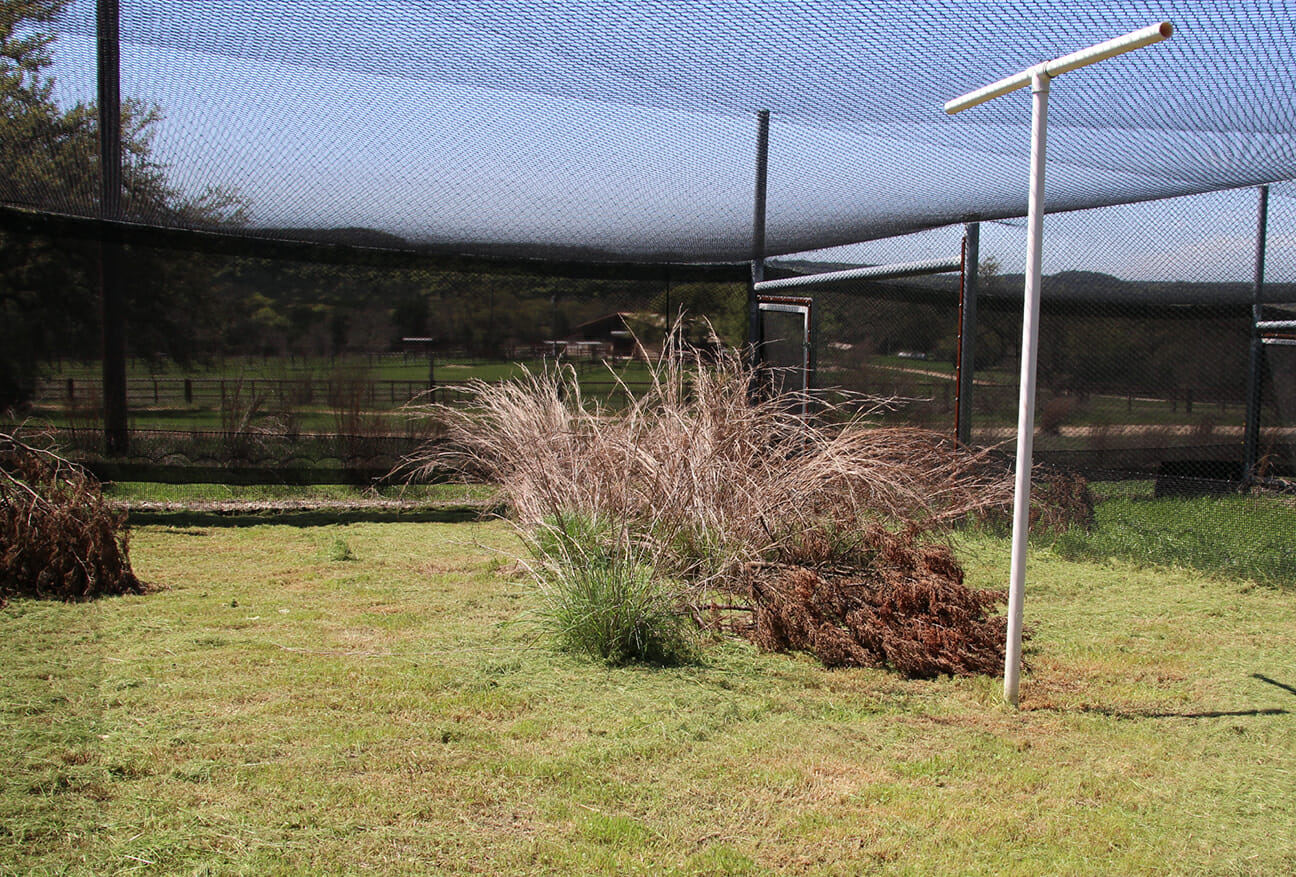 “The biologists also go to Houston Zoo and Caldwell Zoo for pickups,” Burch said. “It usually takes them 4-5 trips to Fossil Rim to pick up all of our APCs that leave each year. It is great that Sutton Avian Research Center in Oklahoma is also raising chicks now. It’s big to have another facility aiding the cause.”

The Staff For Chick Season

Davis has been hired for a pretty remarkable staff position that will have her transitioning departments from avian, to carnivore, to hoofstock, to Children’s Animal Center at various times of the year. Davis was a Prairie Grouse Conservation Intern in 2019. She replaces longtime chick season staffer Molly Shea, who was recently promoted to Senior Animal Care Specialist – Hoofstock.

“We are excited to bring Davis onto the team,” Burch said. “We are going to train her and get her up to speed on every last detail of how this program operates.”

Watson is beginning her very first internship after graduating from Martin Methodist College in Tennessee. She talked about pursuing the internship and being ready to take on the challenge of chick season.

“I found out about this opportunity on the Texas A&M Job Board,” Watson said. “I’m interested in conservation and wildlife management, so this internship stood out. I didn’t know much about prairie chickens beforehand, but after doing some research this sounded like a really interesting opportunity. I recognize that it’s really important we work to increase the numbers of this endangered grouse population.”

She knows the workload that is coming and is ready for the challenge. 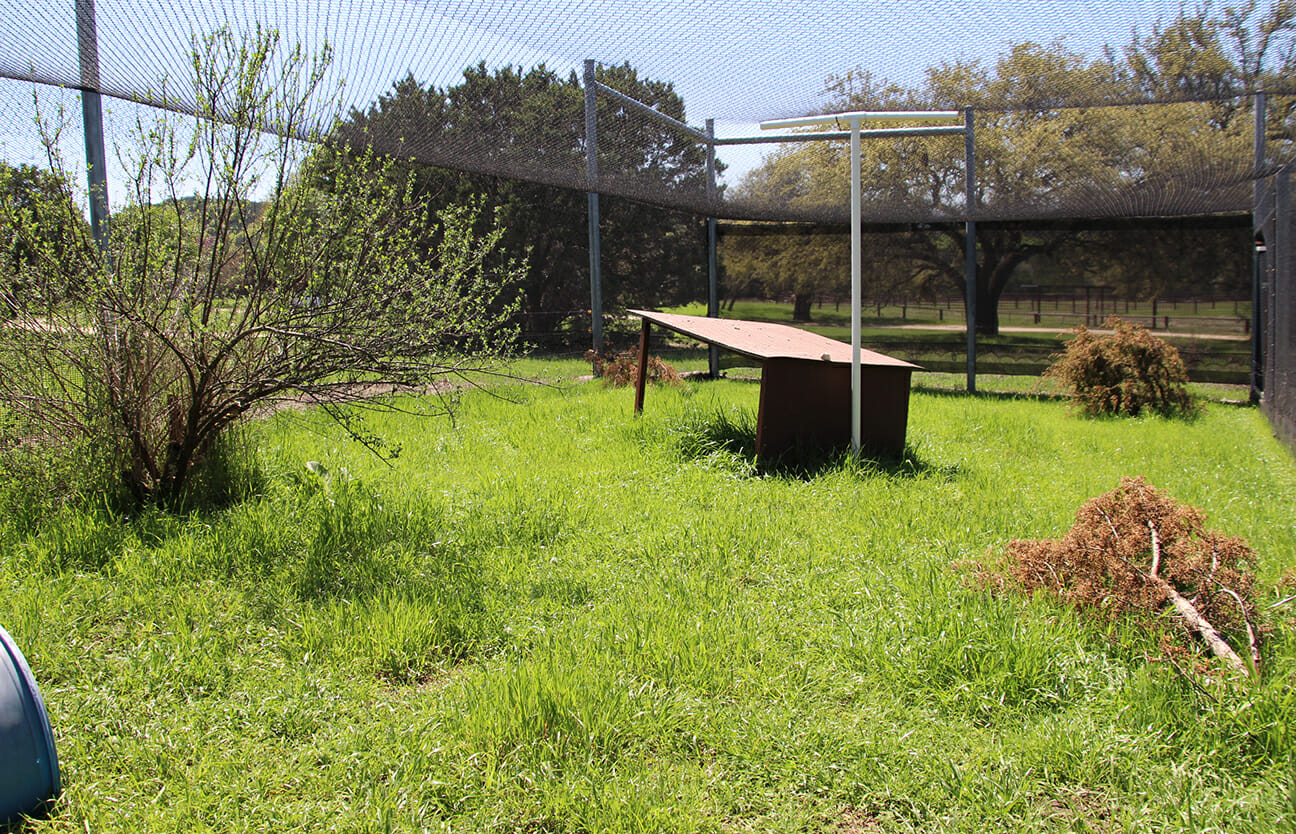 “The APCs have started to lay eggs and that will continue into May, so we will be collecting eggs often,” she said. “I’m expecting it to get pretty hectic once we really get into chick season and are looking after all of them, from what I’ve heard.”

Like many recent college graduates, Watson is ready to explore her interests to help her forge a career path, but she gets the chance to really make a difference for an endangered species in the meantime.

“This is my first internship out of college, so I’m not sure about my career goals yet, but I know I want to be involved in wildlife conservation,” she said. “If I can get a variety of internships, maybe I can eventually figure out what I want to focus on.”

Although the overall approach for the APC staff remains consistent year-to-year, of course there will also be some changes and necessary adjustments, as well.

Two new key pieces of equipment now in the fold are a different model of incubator and a steam cleaner. 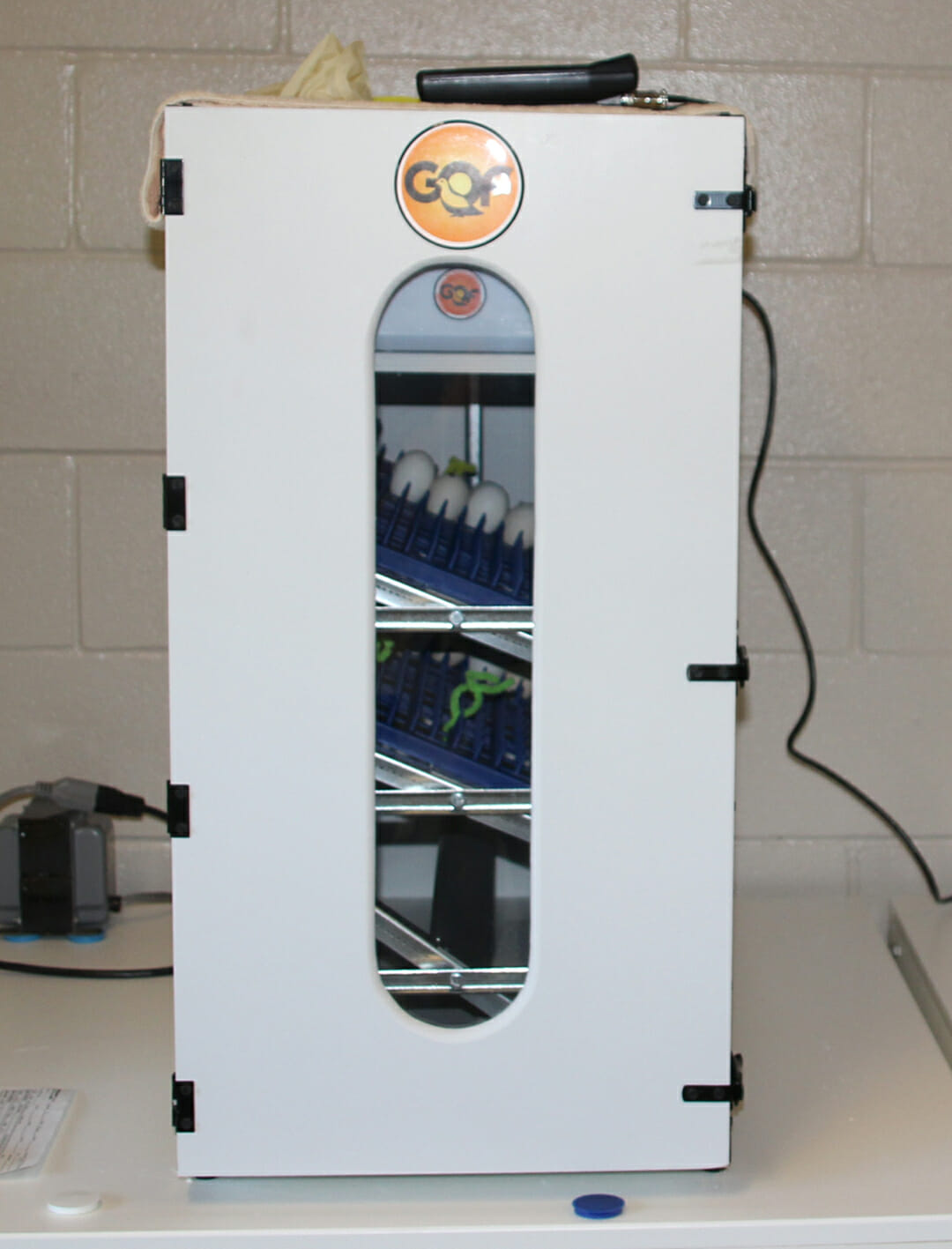 “This incubator has slanted trays, which could accommodate more eggs in less space,” Burch said. “We know that other APC facilities have had good success with this particular incubator, so we look forward to implementing it here, as well. Our veterinary department purchased the steam cleaner for us to clean all cages, countertops, and more. Steam kills avian diseases that could threaten our production here.”

Burch talked about how the nationwide threat of COVID-19 is also factoring into planning for Johnson and her. Fossil Rim continues to be closed to the public due to the threat, but it is also something the animal care staff must keep in mind, whether guests are here or not.

“We have to prepare for any uncertainty with the coronavirus that could cause staffing issues,” she said. “We are prepared to let some of our APC hens incubate and raise their own chicks this year. We’ve never done that, but it will be exciting to see how they might perform. We have 20 breeding pairs this year, and we may give the females a chance to raise some chicks after we have already collected some eggs, as well.

“We’ll still plan to use our three (domestic) broody hens to help with incubation, along with our artificial incubators. But, if we were to have a staffing issue from the coronavirus, planning to involve the APC hens in incubation could keep us from getting overwhelmed.”

Burch was asked how things are going at the national wildlife refuge near Eagle Lake, as well as private land in Goliad County where APCs also live in the wild.

“The staff at the refuge is having to work from home right now,” she said. “Last year, the birds in the wild did pretty well, especially at the Goliad location. We definitely appreciate the landowners in Goliad for joining these efforts. They spend a lot of time looking for the birds there and they had a great 2019, in terms of those APCs thriving.”

Most years, the APC staff at Fossil Rim is entirely focused on the health of the birds. But, with the spread of COVID-19, human health must stay at the forefront of their minds, as well.

“The unusual circumstances this year may affect our final production numbers, but we are going to keep our goals high, and we are hopeful the wild population is still doing well,” Burch said. “Most years, we are concerned with avian diseases which threaten the APCs, and we are thinking about this constantly. This year, we must also think about the threat our staff faces, and it’s our job to take every precaution against coronavirus, plus our usual concerns for the well-being of these birds.”

When Fossil Rim reopens, the chick building can be visited on a Behind-the-Scenes Tour. To visit adult birds and go more in-depth on the APC facility in general, an Adventure Tour is required and will need the approval of appropriate animal care staff.