Nicki Francisco envisions a career of caring for rhinos, and she capitalized on a few months at Fossil Rim Wildlife Center to advance further down that path.

The black rhino intern was in Texas learning from Aug. 23 to Dec. 22. Born in Robbinsville, New Jersey, Francisco discovered early in life that her interests differed a bit from the rest of her family. 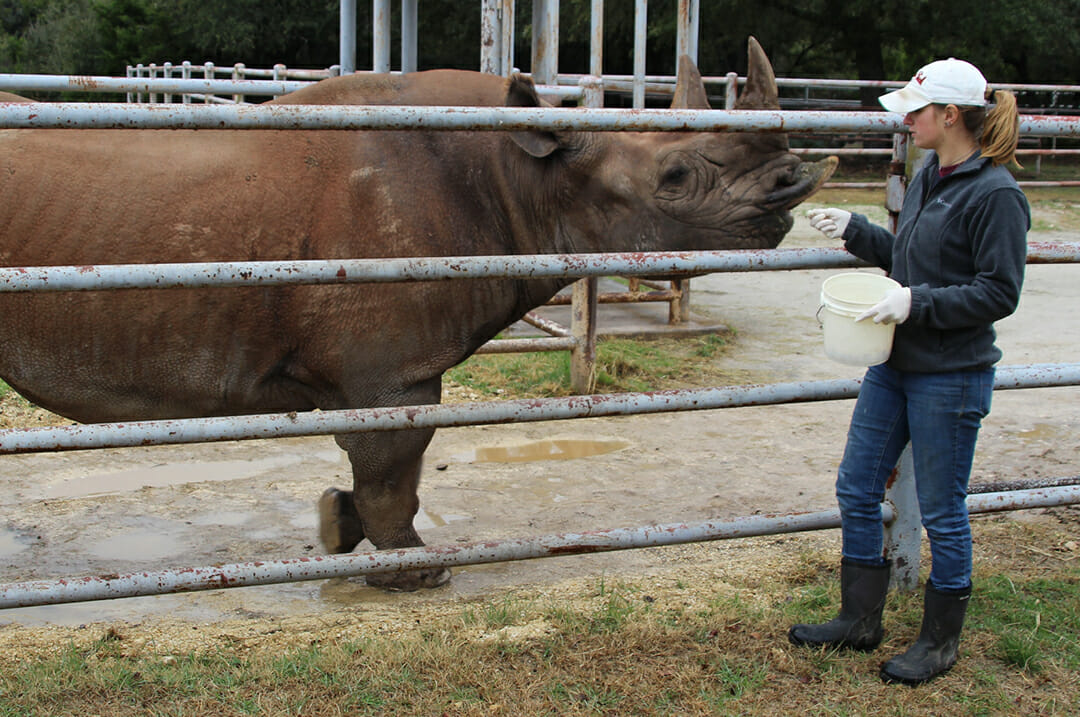 “I’m the only person in my family who is animal-oriented,” she said. “They are all very business-oriented, so none of them really understand where I came from. My mom always asks me where I got my love for animals. I was always outside in the dirt, picking up bugs.”

Francisco earned her Bachelor of Science in biology from Virginia Tech in May 2016.

“I focused on animal science the first year, wildlife science the second and then biology the next two years,” she said. “I got a good mix of animal-based classes – agricultural, wildlife, population management and biology.”

She first thought of pursuing a Fossil Rim experience while in Florida.

“I did an internship at White Oak (Conservation) last summer and worked with Matthew Lamoreaux, who was an animal care specialist at Fossil Rim previously,” Francisco said. “He told me if I wanted to continue working with rhinos, Fossil Rim is a really great place to get that experience. At White Oak, I was a rhino/hoofstock intern, so I worked with black rhinos, white rhinos, Indian rhinos and many other hoofstock species.

“I didn’t know I wanted to work with rhinos when I started at White Oak, but I fell in love with it. They are such unique animals.”

Francisco said her Fossil Rim internship did not go as expected, which proved to be a good thing.

“I had a lot more responsibility and independence than I expected,” she said. “Almost every day, I was alone most of the day doing the work by myself. I saw (Hoofstock Apprentice) Tim (Lloyd) for about 20 minutes most mornings, and then it was all me. It was pretty exciting, because it (essentially) mirrored what a full-time animal care position would look like.

“There are only 43 southern black rhinos in captivity, and I took care of four of them. During my first week, Tim and (Senior Animal Care Specialist – Hoofstock) Justin (Smith) were both very thorough about training since I was around very dangerous animals.

“It was very important to learn how to work safely around them. They were great about teaching if I ever had questions or I wasn’t doing something as efficiently as I could, which I think will be very helpful for me going forward in my career.”

“I got to spend so much time with them that by the end I got to know their different personalities and quirks,” she said. “’Coco’ is probably my favorite to work with. She can be a pain, but it was very rewarding when she had good training sessions. I also love hoofstock, so the Grevy’s (zebras), kudu and bongo are my other favorites.”

One of Francisco’s most memorable moments was being on-hand when the animal health staff performed an ultrasound on the black rhino “Mupani.”

“I think it was only the second black rhino ultrasound the vet staff has done, so it was pretty cool to be a part of it,” she said.

In fact, the ultrasound directly related to Francisco’s intern project, which she gave a presentation on days before returning home to New Jersey.

“My project was to see if there were any significant behavioral or physical changes that I saw in Mupani during the last few months of (potential) gestation,” she said. “We determined she was not pregnant (on Dec. 21). I created a behavioral ethogram of her activity I wanted to look at: increased restlessness, pacing, laying down and promptly standing back up, increase in aggressiveness towards me or other rhinos. She didn’t show me concrete evidence, but it gave me a good reflection of her behavioral patterns.

“After her a.m. diet, she would usually go out onto her patio and lay down for a nap. In the afternoon, she would spend a lot of time out in her catch yard grazing. So, in the future, if she deviates from those behavior patterns, maybe she could be pregnant.

“I also wanted to track her physical changes, so I took daily pictures of her overall body condition and her mammary system. I didn’t observe many physical changes, which now makes sense knowing she wasn’t pregnant. (Hoofstock Curator) Adam (Eyres) and Justin said they think it will be useful for a future intern to have the ethogram and methods from my project when tracking another potential pregnancy.” 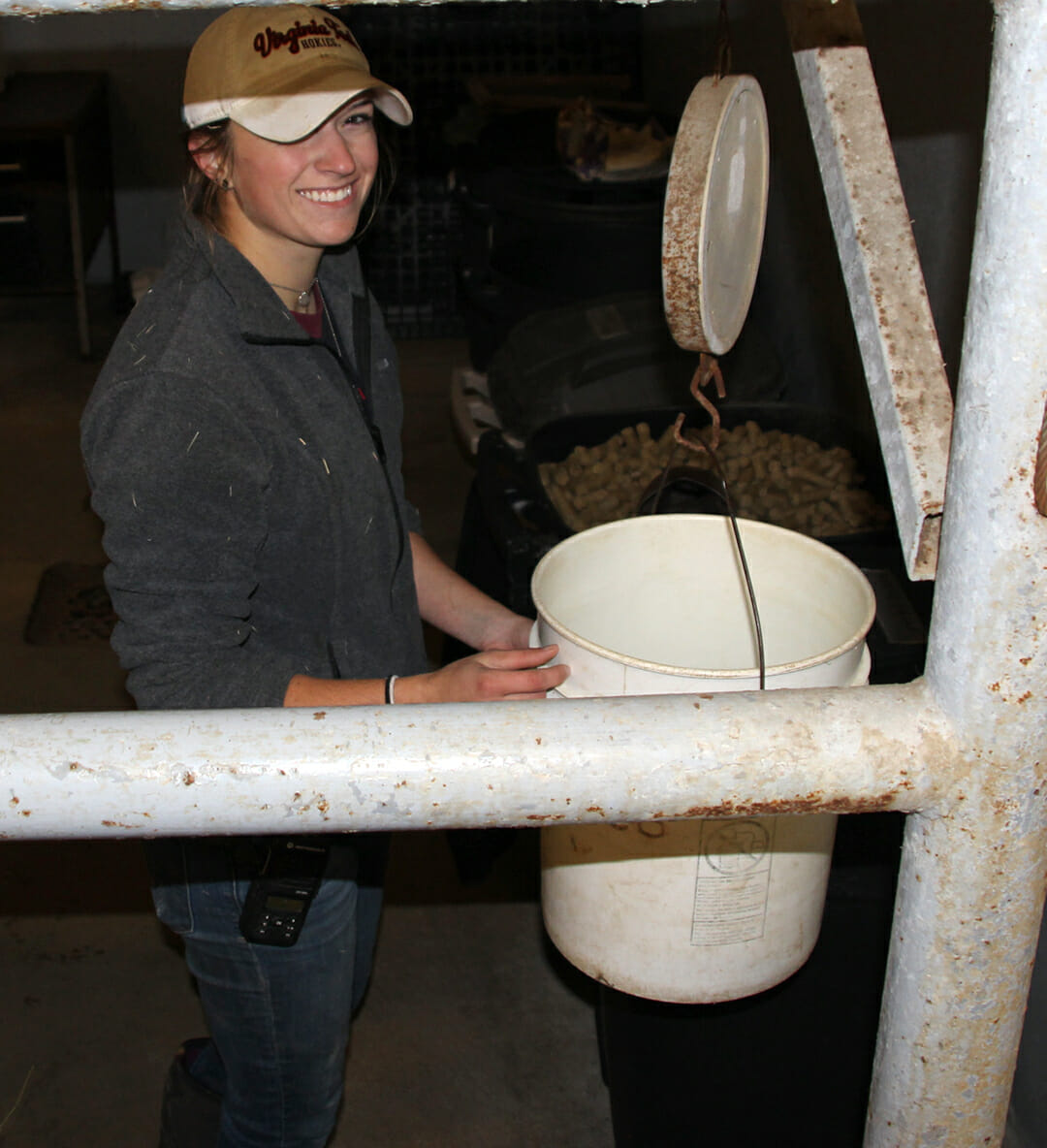 Francisco mentioned another memorable moment, which pointed to the diversity of her experience.

“We did a giraffe knockdown,” she said. “It was interesting to be up-close-and-personal with a giraffe during a medical procedure. There were quite a few days where I was there with the veterinarians for immobilizations.

“When they did an immobilization or procedure on other hoofstock, Adam and Justin were good about letting me jump in on that. At the end of this internship, I got to work with Justin in other hoofstock areas.”

As she wrapped up her final day of duties at Fossil Rim, Francisco spoke excitedly about the future.

“I’m going to work at a zoo in New Jersey – the Bergen County Zoological Park,” she said. “I previously worked there as a seasonal keeper; the staff allowed me to come to Fossil Rim and gain more rhino experience. I’m returning in mid-January to work as a keeper for all sorts of animal species from North and South America. I would love to be a full-time, animal care staff member for rhinos or other hoofstock in a setting similar to Fossil Rim or White Oak someday.”

On that front, Francisco pointed to how her Fossil Rim internship specifically helped her career prep.

“The main thing I gained here, I think, was learning how to work on my own while always considering safety,” she said. “It boosted my confidence that I can go far in this career field. Having the staff trust my reports as an intern was huge; that’s what’s great about this program.” 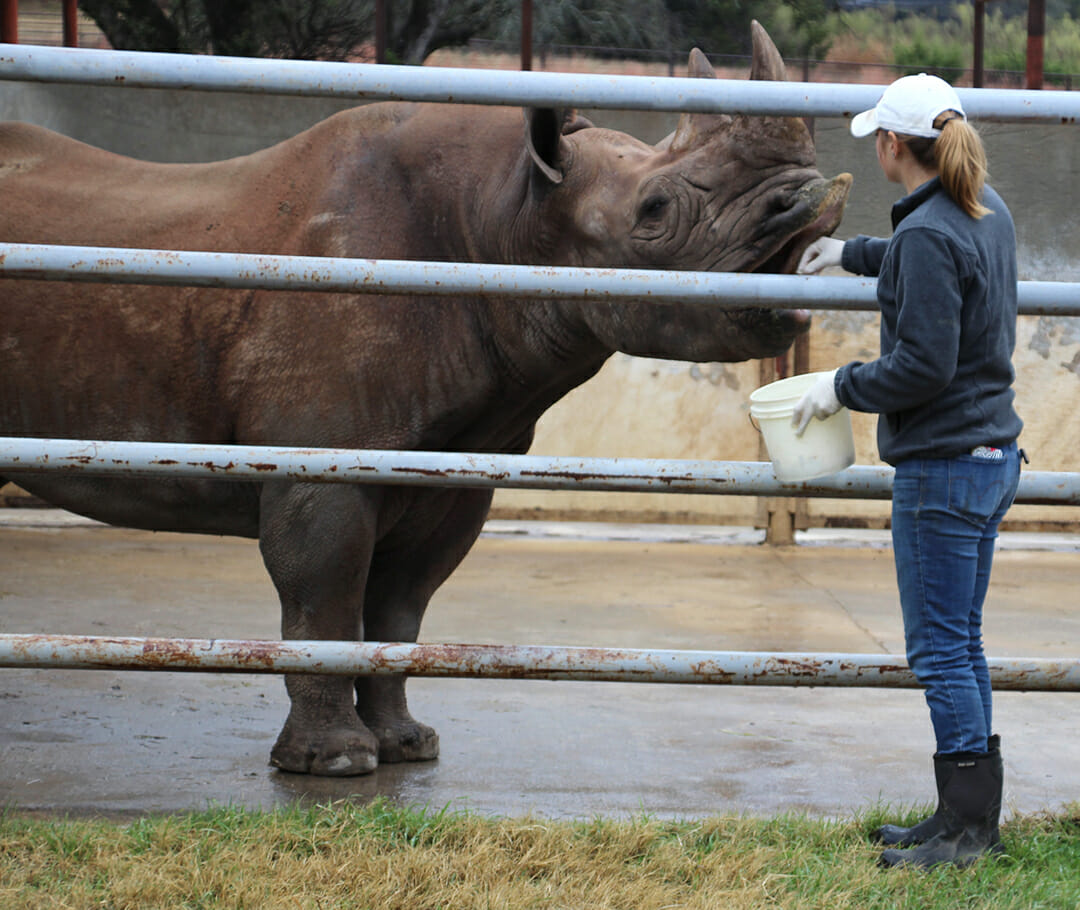 “I feel like this is one of the best places you could come as an intern,” she said. “It’s super hands-on and very unique. The staff is really wonderful about teaching and helping you get all the experiences you want. You have plenty of opportunity to shadow in different areas if you are unsure of your career path.”

As for Fossil Rim guests, Francisco wants them to truly understand what is going on at the facility.

“I hope guests know how much good Fossil Rim does for endangered species,” she said. “My brother was telling people I was working at a wildlife sanctuary, but I told him it’s actually a conservation breeding center that is benefitting the future of these species.”