Some of the smallest baby animals at Fossil Rim are the subject of big news this spring!

“It’s definitely exciting to finally have kittens,” said Carnivore Curator Jason Ahistus. “We wanted to add a new species that we felt we could make a difference for; take part in breeding and help a program out. I think now we are at the point where we are really benefitting the Black-footed Cat SSP (Species Survival Plan), and hopefully we can continue that going forward. I know our carnivore staff is excited to be able to share this news with all of the Fossil Rim supporters out there.”

“We introduced the pair in July after they settled into their new homes,” said Carnivore Specialist Tessa Townsend. “This might seem like a very young age for animals to be breeding, but black-footed cats reach sexual maturity at only 8-12 months old! This is the first litter for each of these cats.”

The carnivore department can always be counted on for some fun and creative animal names, and these kittens received monikers from “The Lord of the Rings” novels. The male is named “Gollum” and the female is “Arwen”. Weighing 60-90 grams at birth, these kittens both exceeded 300 grams when last weighed on April 23.

“Mom will wean the kittens when she’s ready, but usually when the kittens are around two months old,” Ahistus said. “We are now offering solid food to the kittens, and they will start to eat that when they are ready. Adults have a lean-meat diet, plus they get a lot of prey items. Prey items make up 45-50 percent of their diet.” 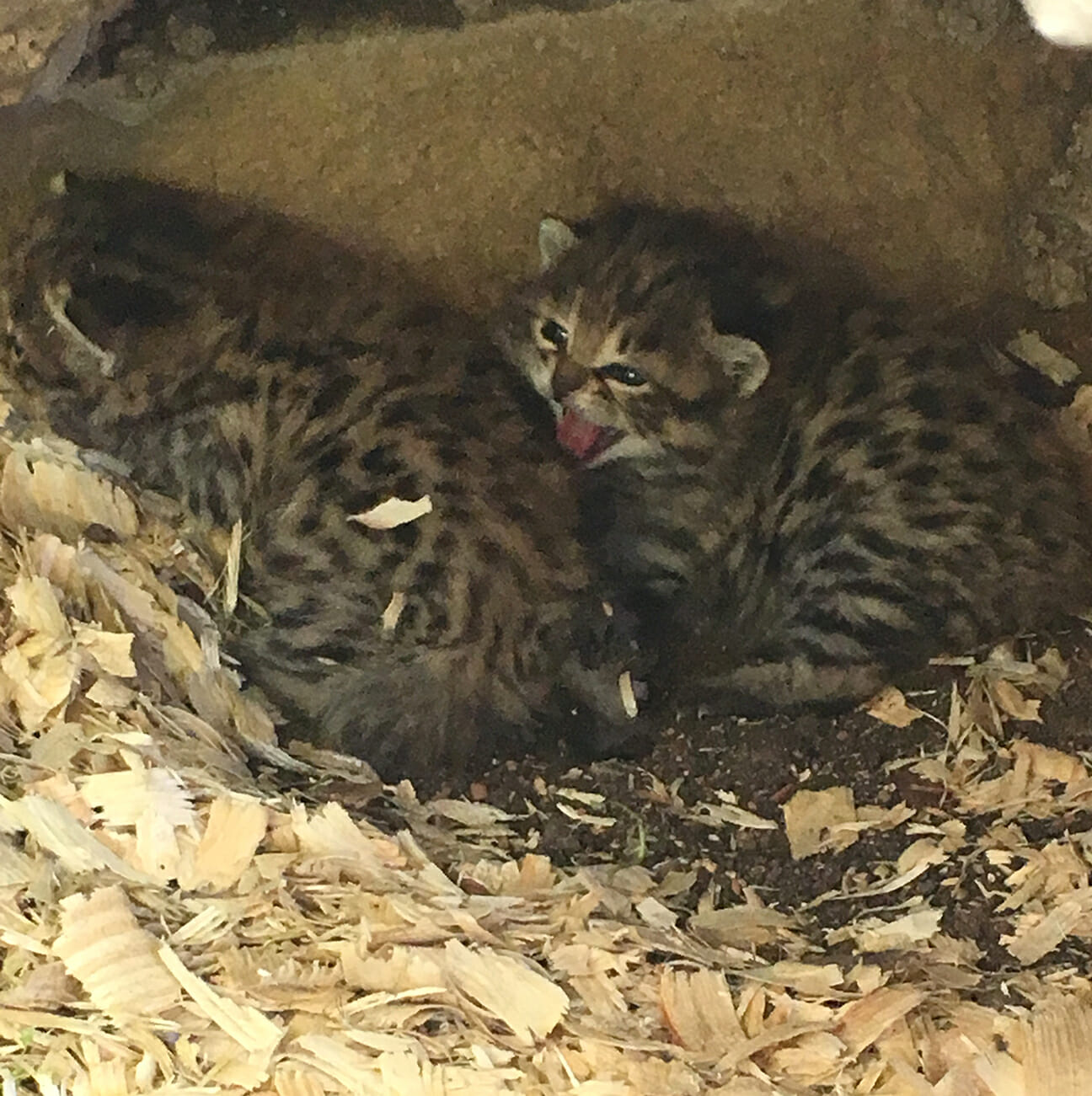 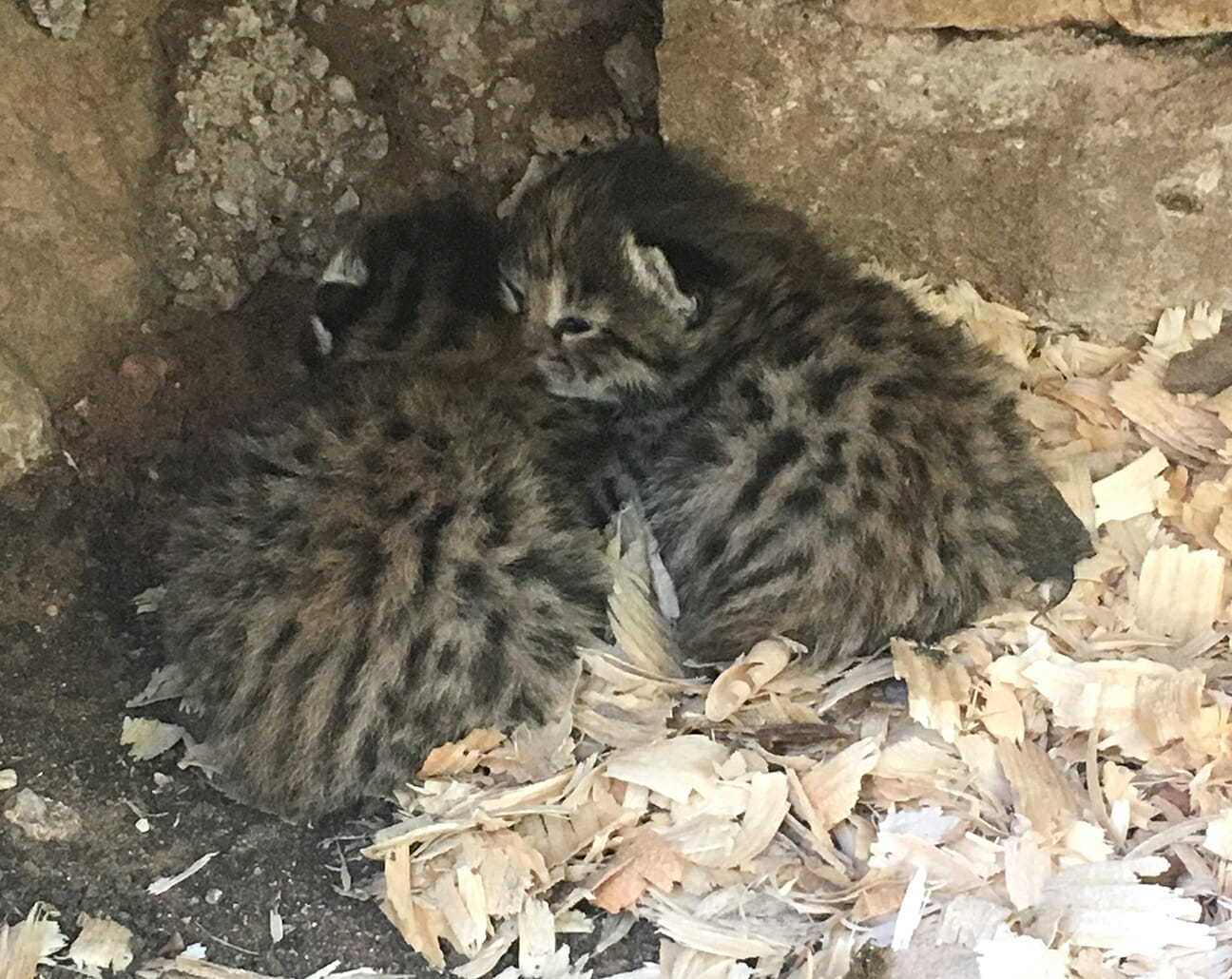 How did Fossil Rim get to this point with black-footed cats?

“In 2014, we had the opportunity to get involved with a new program and wanted a small carnivore species to go in what were formerly our coati enclosures that had been refurbished a bit,” Ahistus said. “I was always intrigued by the small-cat species. They don’t get a lot of exposure or a lot of program participation because they aren’t a high-profile species like the big cats are. We believed we could help a lot with the program we chose, and I fell in love with BFCs, so we went with that one.”

“When we got the first two BFCs, our goal was to breed them,” Ahistus said. “Unfortunately, due to some health issues, the female (Latika) had to be spayed. At that point, we became a holding facility for the SSP. As we created more space for the BFC program, we were able to bring in three other adults in 2018, all with the intention of breeding.”

The pairing of Huck and Small Fry worked out wonderfully, while Morgan is now paired with “Naia” in the IMA.

“In 2019, we have two breeding pairs that we hoped would produce,” Ahistus said. “Huck and Small Fry did; we still have hope for our other pair, but we don’t know yet if they’ll be successful or not.”

Latika now lives at the Children’s Animal Center (CAC), which is free to visit daily even if guests do not go through the rest of the park.

“Guests can currently visit Morgan and Naia in the IMA,” Ahistus said. “The other adults and our kittens will be visible to tours sometime in May. Latika is our post-reproductive female, and she still serves a purpose by educating guests on BFC appearance and behavior since she is probably always going to be more visible than our other cats. It’s great to have her at the CAC, where she can be visited at all times, while we make breeding the top priority with our other adult BFCs.”

Is overseeing the care of BFC kittens different than the methods for cheetah cubs? 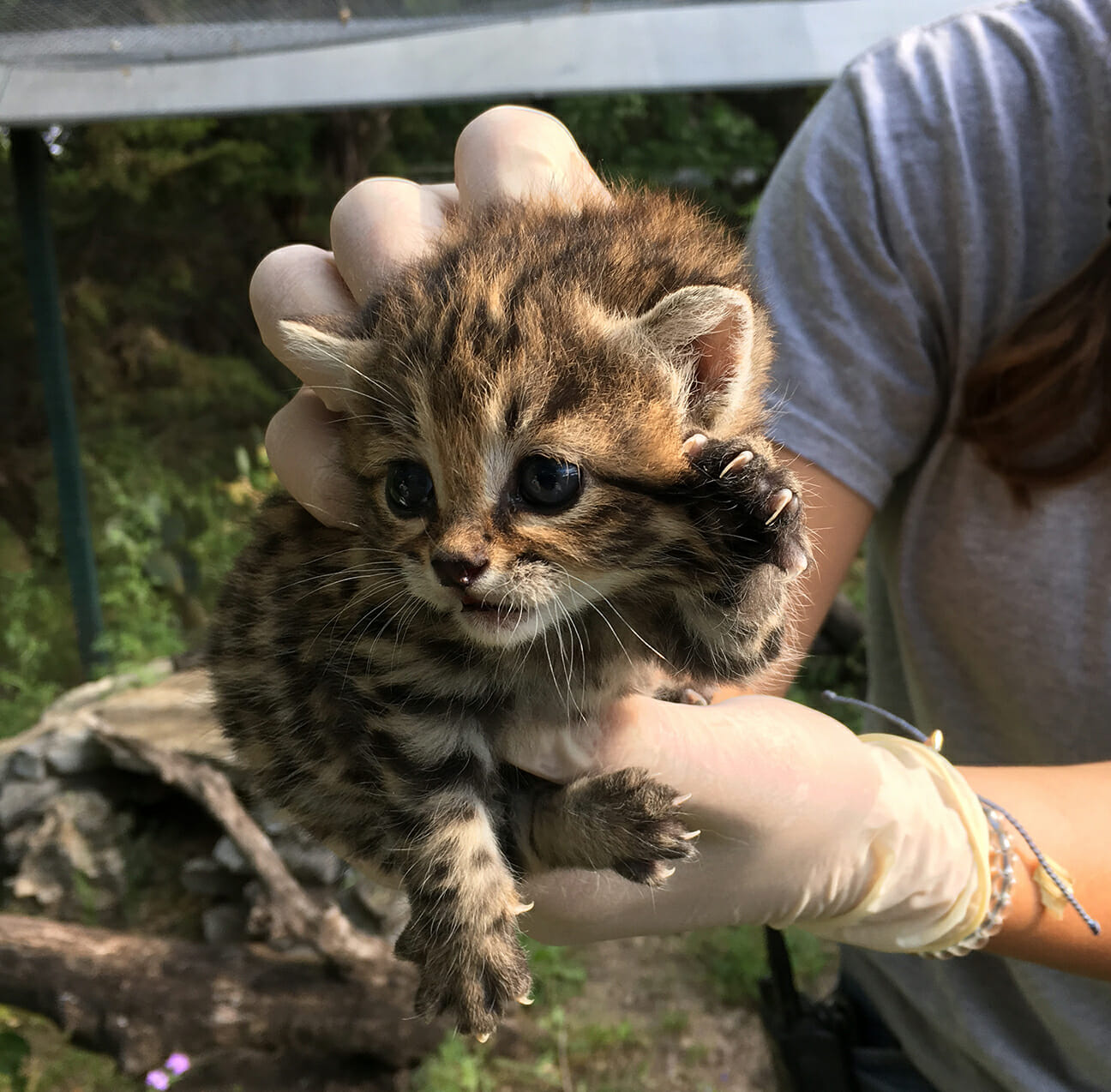 “Our considerations for these kittens are very different than cheetah cubs,” Ahistus said. “The BFCs in general don’t seem to be as high-stress of a species as cheetahs, so we can sit back and let nature take its course without having to worry about stepping in. The main thing was to remove Huck from Small Fry’s enclosure once we knew she was pregnant.

“We are learning a lot as we go, considering this is our first litter. While cheetah cubs are helpless for many weeks, the BFC kittens were nearly ready to eat solids as they approached one month old. They grow and reach maturity so fast, compared to big cats.”

What about the period when the carnivore department was looking for evidence of pregnancy?

“Due to the secretive nature of black-footed cats, we never actually saw any breeding behavior from Huck and Small Fry,” Townsend said. “This is likely because females only go into estrus for 1-2 days and are only receptive to males for several hours. Since we didn’t have a date of conception to base her due date on, we determined her pregnancy by monitoring her weight and body condition. We knew there was a good chance she was pregnant after confirming several weight increases, so we asked our veterinary staff to get X-rays in order to confirm.

“From X-rays, the vets were able to see two kitten spines! By two weeks old, their eyes were fully open and they were gaining mobility, although most days are spent snuggling close to each other and Small Fry.”

Ahistus expanded on the “secretive nature” of BFCs that Townsend referenced.

“In our experience, BFCs are secretive about everything they do, plus they are not on the Scenic Wildlife Drive and encounter little interference from the public and staff here,” he said. “That allows them to go through a natural behavior pattern. It makes them difficult to see, and it’s harder for us to learn about them, but they are doing what they are supposed to be doing, and that’s the most important thing for a successful program. This is an example of what makes the IMA great for difficult-to-breed species.

“We monitor them the best we can, and if we think we see weight changes, we can get an X-ray to confirm pregnancy like we did with Small Fry. We took the X-ray in her enclosure while she was alert and eating in a small cat crate.

“We didn’t know when she was due, but we stayed ready and planned accordingly. Then, one day she didn’t show up for food in the morning and we knew something had happened.”

The two births bumped Fossil Rim’s BFC population up to seven animals, making it the largest population among all institutions participating in the BFC SSP.

“Right now, we do have the largest collection of any SSP facility, but that changes all the time based on births, deaths, and transfers,” Ahistus said. “We have dedicated six spaces to the species, which allows us to breed and hold offspring. It’s a great thing to be able to do both, so providing those spaces for the SSP can really make a difference.

“Ultimately, I’d love to do more. As a carnivore staff, we really enjoy working with this species.”

An entire article could be done solely on how interesting the black-footed cat is as a species. For one thing, a wild BFC brings down more prey in a single night – 10-14 rodents or small birds – than a leopard does in six months, according to the PBS Nature miniseries “Super Cats”. With a 60-percent hunting success rate, they are about three times as successful as lions and are legitimately the deadliest cat on Earth.

“They are very tenacious at their small size, usually about four pounds, and are the most efficient hunters in Africa, which is a strong statement in itself,” Ahistus said. “They can defend themselves from predators as large as jackals, so I would think no domestic cat would want any altercation with them. They can’t take down large prey, so they need a variety of small prey available. Human encroachment can reduce their prey base, which is a key part of the reason they need the help of conservation breeding programs.”

While Latika can be visited daily at the CAC, to potentially see the rest of Fossil Rim’s BFC population in the IMA, scheduling a Behind-the-Scenes Tour will be required.