Fossil Rim Wildlife Center received great news in December to the tune of two awards from the Association of Zoos and Aquariums (AZA).

Fossil Rim was honored with the 2015 Quarter Century Award for 25 years of continuous accreditation.

“I think it’s a significant achievement to maintain accreditation because you have to apply for it again every five years, plus the accreditation standards are elevated every year,” said Kelley Snodgrass, Fossil Rim chief operating officer. “The standards we were measured by in 1986 are different than how we are evaluated today. It’s been a progressive improvement on all areas of operation related to the mission of this organization.” 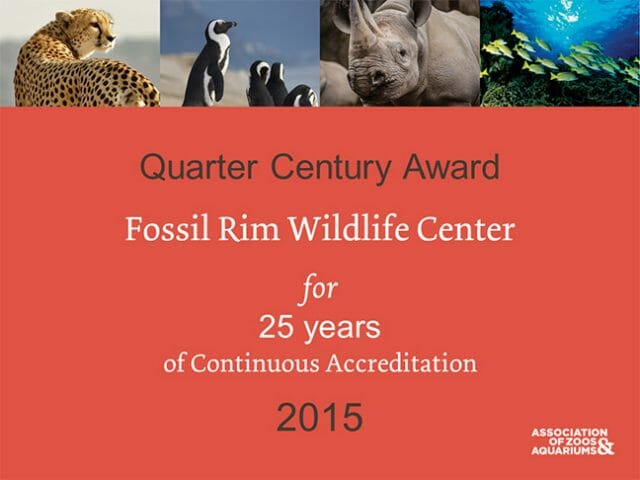 Snodgrass appreciates what it took to reach 25 years.

It’s an honor to have made it 25 years,” he said. “It’s a testimony to the dedication of this organization, the employees and the volunteers associated with Fossil Rim Wildlife Center. The time and effort they put in to maintain accreditation – it’s a lot of work and attention to detail.”

Accreditation involves quite the extensive evaluation.

“Certainly accreditation entails all of our animal care and animal health conservation initiatives, but also finance, safety, security, facilities, policies and procedures,” he said. “It really probes the depth and breadth of our organization.”

“One of the major benefits of being part of the Association of Zoos and Aquariums is a lot of people visit their website and see what Fossil Rim is about,” he said. “We can’t operate in a vacuum and be successful, so that’s important. It’s all about getting our information out to as many people as possible.” 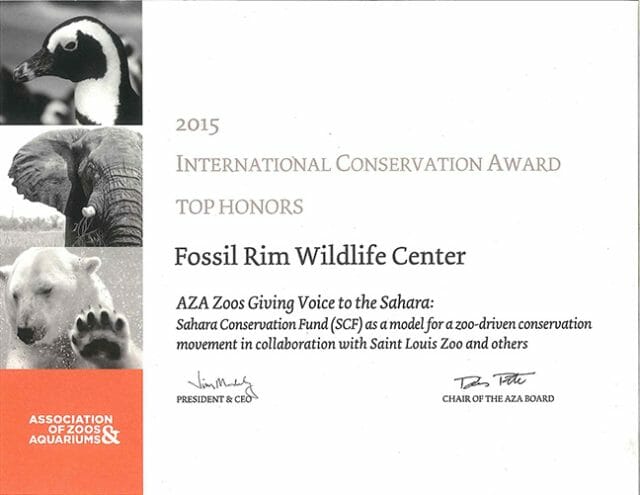 Fossil Rim also received the 2015 International Conservation Award Top Honors in regard to “AZA Zoos Giving Voice to the Sahara: Sahara Conservation Fund (SCF) as a model for zoo-driven conservation movement in collaboration with Saint Louis Zoo and others.”

“Fossil Rim is proud and honored to be playing a role with the Sahara Conservation Fund (SCF) in the conservation of Saharan and Sahelian wildlife,” said Adam Eyres, Fossil Rim hoofstock curator. “We have participated through in-kind and cash donations to the SCF over the last decade with the conservation of addax, addra gazelle and scimitar-horned oryx, and are currently playing a slightly larger role with the scimitar project that SCF and the Environmental Agency of Abu Dhabi are spearheading for the release of scimitars back into their native range of Chad, Africa. As a member organization of the Association of Zoos and Aquariums, we are glad that other facilities are also playing pivotal roles in the conservation of what has been called one of the most neglected regions of the world for conservation work—until now.”