There is no color difference between black rhinos and white rhinos. They are both dark gray when they are not covered in mud or dust. Black rhinos have tough skin that they protect from the sun and insects by rolling in wet clay. They only have hair on their ears, tail tips and eyelashes.

Although they have poor eyesight, their hearing is acute. Black rhinos have long, tube-shaped ears that act as funnels for sound. They can swivel their ears in all directions, picking up noises from great distances.

The black rhino horn is not a true horn; it is made of dense fibers similar to material in fingernails. It can range from to 1.5-4 feet in length. The horn is not attached to the skull, but rather grows from the skin.

Black rhinos are browsers, meaning that they eat a variety of leaves from trees and shrubs. Their pointed lips are perfectly adapted to remove these leaves efficiently, moving like a finger to pluck them from branches. Their necks are not nearly as bulky as white rhinos, giving them more freedom of movement, and the ability to grab food above their head level.

Black rhinos have a great sense of smell, which they primarily use for detecting danger. Unlike white rhinos, black rhinos are mainly solitary animals. They are territorial, and possessive of their space which always includes a water source and place to wallow. The boundaries are defined by urine sprayed on bushes and middens (dung heaps) left by the male at regular intervals.

Male black rhinos scatter the dung with their horns and hind feet to form middens about 72 inches wide. These are most likely used to warn other males that they are trespassing, and also to advertise their own presence to single females in the area. who may thus be encouraged to enter their territory.

Despite their massive size, black rhinos are very fast runners, and can reach speeds of over 30 mph.

Fossil Rim participates in the International Rhino Foundation’s Southern Black Rhino Sustainability Program, which is a coordinated international effort to save this species.

In addition to breeding, Fossil Rim is participating in research that will hopefully help increase the world’s dwindling population.

While strict laws prohibit hunting to protect black rhinos, poaching continues to be a problem. Laws are difficult to enforce, even in national parks and reserves given the availability of automatic weapons in the region and ever-higher prices for rhino horn.

Rhino horns are a popular ingredient in traditional Asian medicines, and more recently they have become a status symbol to display wealth. There is no scientific evidence of rhino horns’ medicinal value, but poaching continues.

When in captivity, black rhinos have a tendency to absorb and store too much iron. The tannins found in small tree limbs and leaves play an important role in binding iron and decreasing its absorption by the rhinos in the wild. However, it is difficult to replicate the natural browsing behavior of black rhinos in facilities, which means care teams but take extra steps to manually reduce iron absorption.

At Fossil Rim, black rhinos are given salt supplements and hay, instead of other grains and minerals that contain high iron. There is also a water filtration system that removes most of the iron from our well water. These methods have proven successful in helping our black rhinos stay healthy.

They live in the Intensive Management Area and can potentially be visited on a Behind-The-Scenes Tour.

VIEWING TIPS
Whether you see the black rhinos or white rhinos first during your guided tour, take note of how each species looks so you will understand the differences. Be sure to ask your tour guide to elaborate on how they are different. If the temperature is below 50 degrees, they may be put in their barn. 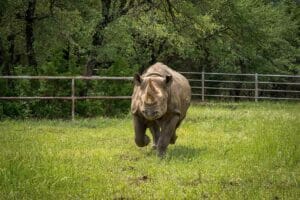 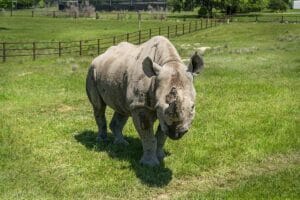 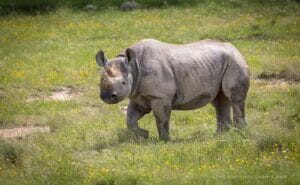