Despite its name, the nine-banded armadillo can have between seven and 11 bands on its armor. Members of this species have long, pointed noses and relatively short legs with well-developed claws. Because they walk on the tips of their feet, they tend to leave three-toed tracks that resemble bird footprints.

In Spanish, armadillo means “little armored one.” This is because of the bony, armor-like plates covering the animal’s head, legs, and tail. This armor is pinkish-gray in color, and can appear shiny at times. Significantly, the armadillo is the only mammal possessing this unique defense mechanism.

Despite the common misconception, nine-banded armadillos cannot roll up into spherical balls. In reality, only two species of armadillos (both three-banded) can roll up completely.

Armadillos are closely related to sloths and anteaters. This relation lends itself to the armadillo’s great sense of smell, but poor eyesight.   Strong claws and leg muscles help them dig, while their sticky tongues quickly gather insects and other snacks. In fact, armadillos will eat nearly 500 different foods, most of which are invertebrates. They hunt during early morning and late evening, but can be found sleeping up to 16 hours per day.

Armadillos nearly always give birth to four identical young. It should be noted that these young are extremely vulnerable at birth, due to their carapace not yet being hardened.

Armadillos are good swimmers, and can hold their breath for up to six minutes when necessary. Given that they're naturally skilled diggers, they live in burrows located in limestone formations with and  prefer warm, wet climates.

While the nine-banded armadillo is the state mammal of Texas, they are a general symbol for the entire American southwest. Although they maintain a mascot-status, they can be considered a pest species by some thanks to their tendency to uproot lawns and gardens in search of food.

If the weather is right, armadillos can often be found in any of the pastures. If you're searching for them, keep a look out for low movement in the grass.

VIEWING TIPS
Armadillos have very poor eyesight, so if you're quiet they may approach you while they search for bugs. 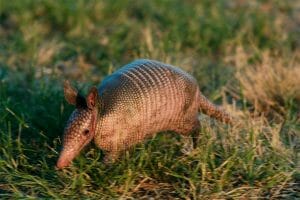 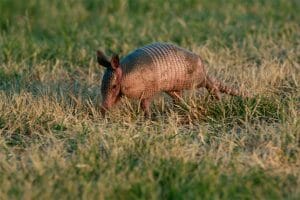 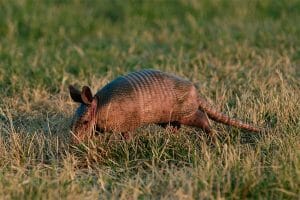