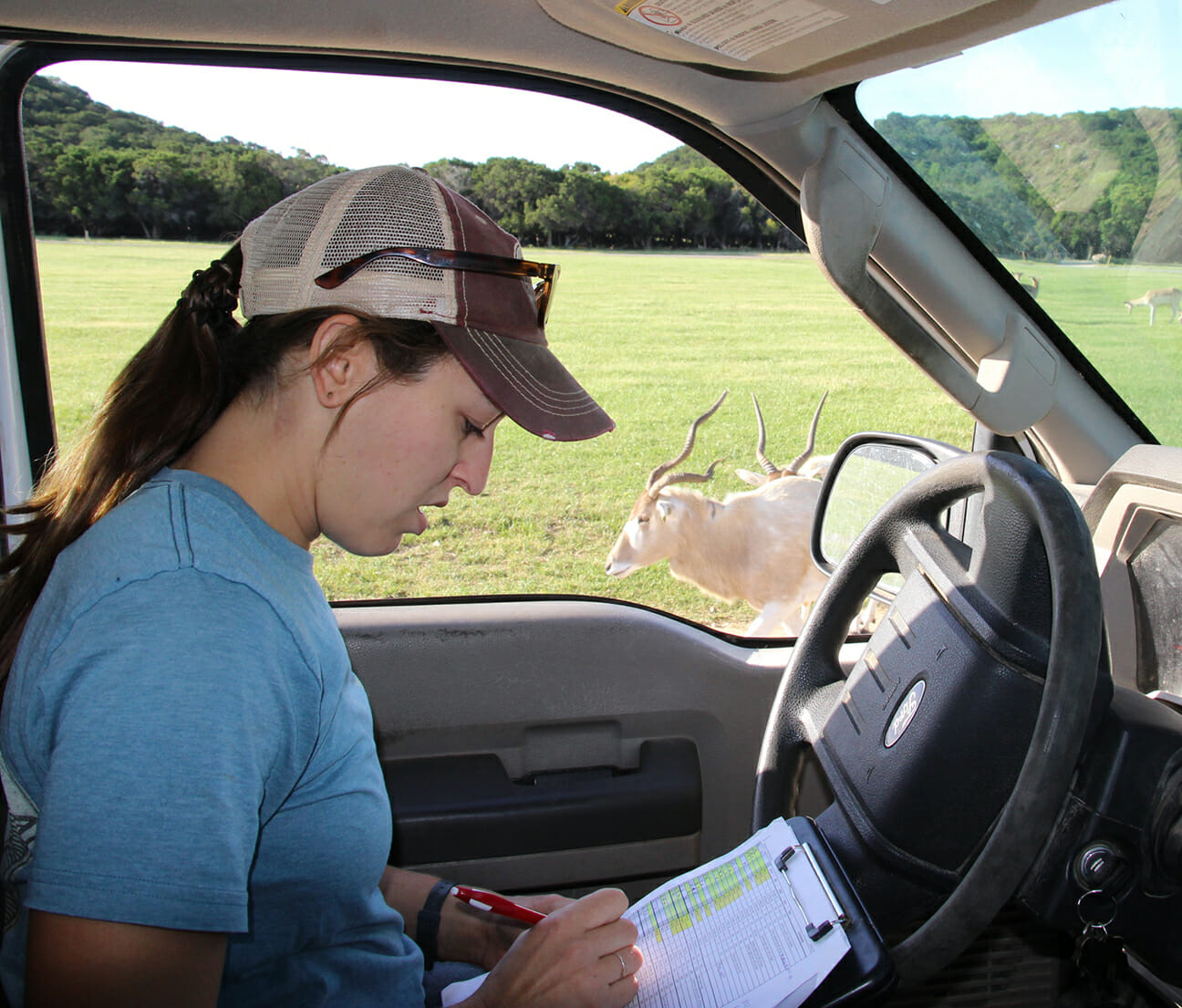 Molly Shea has long appreciated addax antelope during her years working at Fossil Rim, but now she’s taking on a lot more responsibility in an effort to help this species classified as “Critically Endangered.”

A senior animal care specialist working with hoofstock at Fossil Rim who is also on the Caprinae TAG Steering Committee for the Association of Zoos & Aquariums (AZA), Shea now has another title with AZA as Addax SSP Coordinator.

“I applied in late July and found out I was selected in late August,” said the Wisconsin native. “(Director of Animal Care) Adam (Eyres) had suggested that I apply. He’d heard about the opening and liked the idea of it being someone from Fossil Rim since we have the largest addax population among AZA facilities and a good history with the AZA.

“That’s one of the cool things about Fossil Rim. We are a small staff, so there are always growth opportunities and we are encouraged to take advantage of them. It’s good for us as a staff and it reflects well on Fossil Rim.”

Shea previously had a leadership role within AZA as Kordofan Aoudad Program Leader when the species had an active SSP.

Shea explained that as a program leader, she kept the studbook current and was also the SSP coordinator for Kordofan aoudad. While Wendy Enright at The Living Desert Zoo manages the international studbook duties for the addax, the magnitude of the SSP coordinator role is much greater for this species.

“To be honest, I am still figuring out the full scope of everything I’ll need to do,” she said. “The SSP coordinator takes all of the information collected and maintained by the studbook keeper and acts as the liaison between different holding facilities and a population biologist to make sure we are breeding these animals responsibly. I will use all of this information to prepare a breeding and transfer plan, which is published every few years.

“I’m learning to separate from also being in charge of the studbook compared to my role with the Kordofan aoudad, but I know the addax studbook keeper is putting in a lot of work with roughly six times as many addax in SSP facilities as there were Kordofans. It’s essentially a full-time job in itself to keep track of the full population.”

Still a twenty-something, Shea has come a long way since her days as an intern at Fossil Rim.

“I’m very proud of how far I’ve come at a relatively young age,” she said. “I’ve been here for seven years in a full-time role and feel like I’ve accomplished a lot, but it’s because I’ve been encouraged to take opportunities. I rarely say ‘no’ when it’s an experience that will further my career; I’m always down for a new challenge.”

Simply for making connections beyond Fossil Rim, her role with the Kordofan aoudad is still paying dividends.

“I learned to oversee a group of animals beyond these at our facility, as well as contact people at other facilities and develop a breeding and transfer plan on a smaller scale,” she said. “As I met people while working for the Kordofan population, some of those contacts will carry over to the Addax SSP and the familiarity is already there.”

As for the addax species itself, Shea had plenty she wanted to talk about.

“This species is gaining more publicity because there are currently reintroduction efforts in Chad, which leads to more activity with them here in America, too,” she said. “We’re in this field because we care about conservation and these animals. We want to make an impact so that we can responsibly release these animals back into the wild.

“You can’t do that without a healthy captive population, which acts as an insurance population that is appropriately managed by the studbook keeper and the breeding and SSP coordinator. There is still hope for critically endangered species like the addax.”

People who have visited Fossil Rim may remember the addax well, as they can make quite an impression.

“Addax are a great ambassador species for our Main Pasture,” she said. “If you’ve visited here, you’ve probably fed an addax. They are still herd animals, but they are more independent than the sable herd, for example, which functions as a closer unit.

“The addax will split off into smaller groups and do their own thing, which makes behaviors more evident in the individuals. You might see a female still hanging out with the calf she had a few years ago or with other females born in the same year.

“Sometimes, addax might be thought of as goofy or friendly at Fossil Rim, but some of those individuals best known to feed from cars can switch to a protective dam as soon as her calf hits the ground and she’ll do everything she can to protect it. Then, months later she’s visiting cars again with her calf in tow.”

Some antelope species, such as gemsbok, are very difficult to identify by their horns. That’s not the case for addax, at least where the trained eye is concerned.

“Their horns are relatively different among individuals, so it’s fun to learn their horn shapes as a way to identify them,” Shea said.

She appreciates how addax have adapted to live in the harshest of environments. After all, even Texas heat can’t hold a candle to the weather in the addax’s native North Africa.

“One of my favorite things about addax is they are so highly adapted to survive some of the harshest weather conditions on Earth,” she said. “Something I think is really cool that doesn’t get mentioned much is how unique their feet are. They have overlapping toes to make nearly a circle, which works like a snowshoe to increase their efficiency when walking in the sand.

“They go from stark white in the summer to deflect the sun and then become a coarser gray in the winter to absorb heat. They are a really cool example of evolving to adapt to their environment.”

To learn even more about addax at Fossil Rim, check out this blog post with Shea’s coworker Ben Jernigan: https://tinyurl.com/3azj7ww6.

Shea will continue working hard in Texas for addax, and maybe abroad someday, if she gets the chance.

“If I ever get the opportunity to go to Chad to help with the reintroduction, I’d jump at the chance,” she said. “Those opportunities are amazing. We’ve done some things here to help the effort, like fitting addax for radio collars modeled after the work we did for the scimitar-horned oryx reintroduction.”