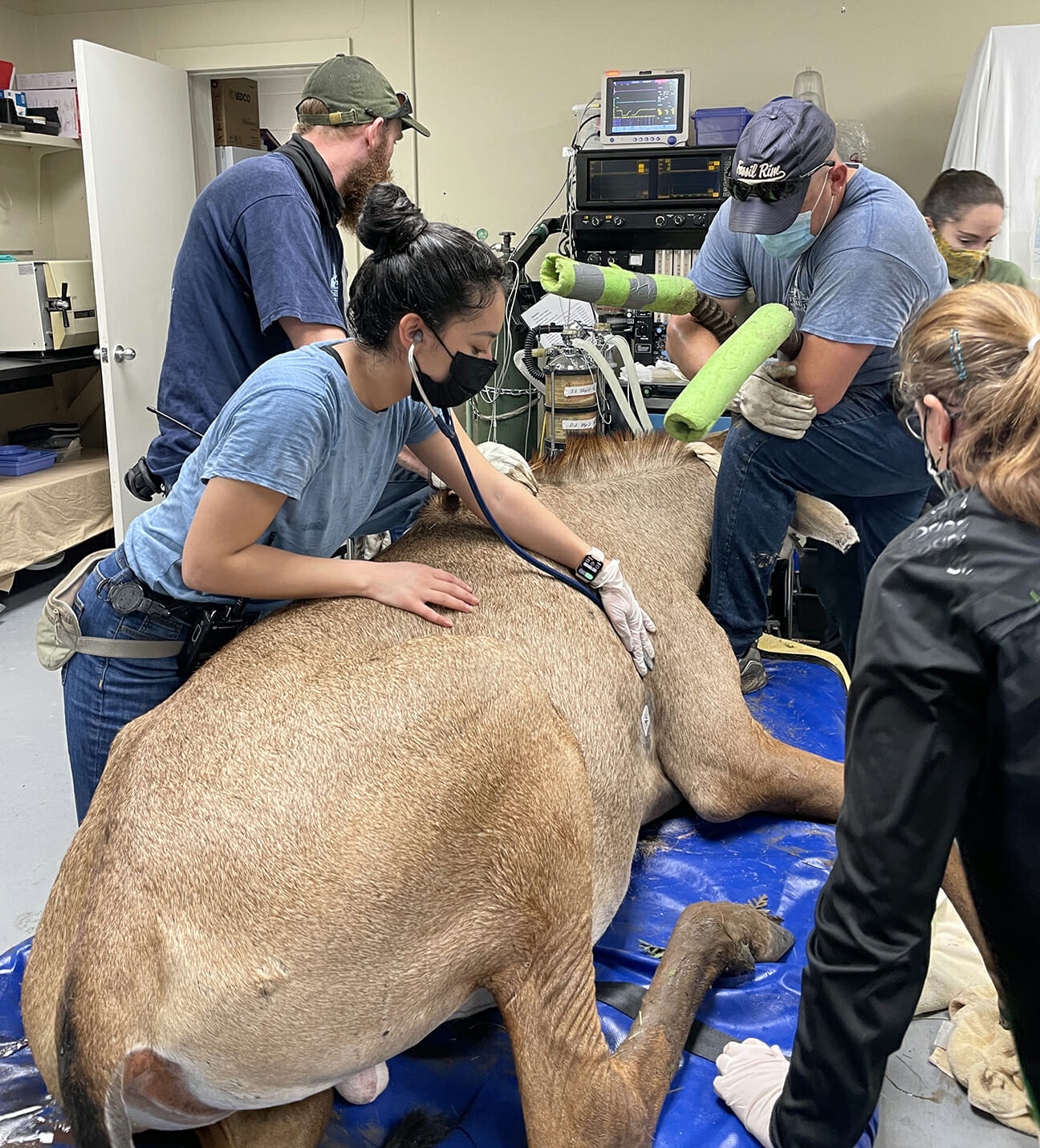 My name is Angelica Mendoza and I’m a fourth-year veterinary student. I will be graduating from The Ohio State University’s College of Veterinary Medicine in May of 2022 with a career interest in clinical zoological medicine.

During my time here at Fossil Rim, I’ve gained so much knowledge on the exotic and wildlife animal residents, especially hoofstock, which I can apply to my future zoo and wildlife rotations. Being that conservation is one of the mission pillars of Fossil Rim, I’d like to discuss neonatal exams – what a neonatal exam entails and why it is important, with a focus on hoofstock.

A neonate is an animal in its first month of life. Our goal at Fossil Rim is to examine neonates when they are between 24-48 hours old, as this timing allows for good mother-calf bonding and ability for the calf to get good colostrum.

Neonatal exams aren’t performed for every animal, but the animals we do look at include roan, sable, bongo, kudu, dama gazelle, addax, waterbuck, Arabian oryx, scimitar-horned oryx, gemsbok, and rhinos when possible. What is done during a neonatal exam?

Physical examinations are performed and include general observations such as behavior, attitude, and physical abnormalities with a focus on any congenital defects such as cleft palate or cardiac defects; weight, temperature, pulse, and respiratory rate are also recorded.

Blood is drawn from the neonate to run several tests, a microchip is inserted subcutaneously (under the skin) at the base of the left ear, and the animal is equipped with an ear tag for identification purposes. Additionally, we always make sure to put the animal back where it was found.

What is a cleft palate? This is an opening of the hard palate between the mouth and the nose that is caused by failure of fusion during development.

This can be problematic, as you now have communication between the nose and mouth leading to the inability to nurse, failure to thrive, coughing and gagging when drinking, trouble breathing, and even secondary pneumonia. This is a rare occurrence, but still an important defect to look for early in life.

What are the congenital cardiac defects to look out for? Atrial septal defects and ventricular defects are most commonly seen. We can tell there is something not quite right with the heart by listening to the heart sounds with a stethoscope upon physical examination, but to definitively diagnose these defects we would need to perform an echocardiogram (cardiac ultrasound).

Once we have blood samples, what tests are performed?

*Total solids (TS): Measures the amount of proteins in the blood and can be used as a quick guide to help determine potential mechanisms for anemia, help to confirm adequate colostrum intake, and assist with determining the presence of other disorders.

*Complete blood count (CBC): Measures the different cell lines in the blood to make sure the animal has a normal amount of red blood cells and white blood cells.

*Zinc sulfate turbidity test (ZSTT): Measures the amount of antibodies an animal has, which is an important test in establishing the immune status of the animal.

*Blood glucose (BG): Indicates whether or not the animal has recently nursed.

*AZO stick (BUN): Detects the amount of urea in the blood to assess the function of the kidneys.

Remaining blood samples are stored or banked for future needs.

Everybody loves babies, but neonatal exams are more than just an excuse to hold cute babies. Neonatal exams serve as a key part of conservation breeding and are pivotal to a healthy life for the animal.

I’ve thoroughly enjoyed my time here at Fossil Rim, and I’m excited to apply all the information I’ve learned to my upcoming zoo and wildlife rotations. Fossil Rim is an amazing institution with incredibly knowledgeable staff, and I highly recommend it to anyone who is willing to work and learn!