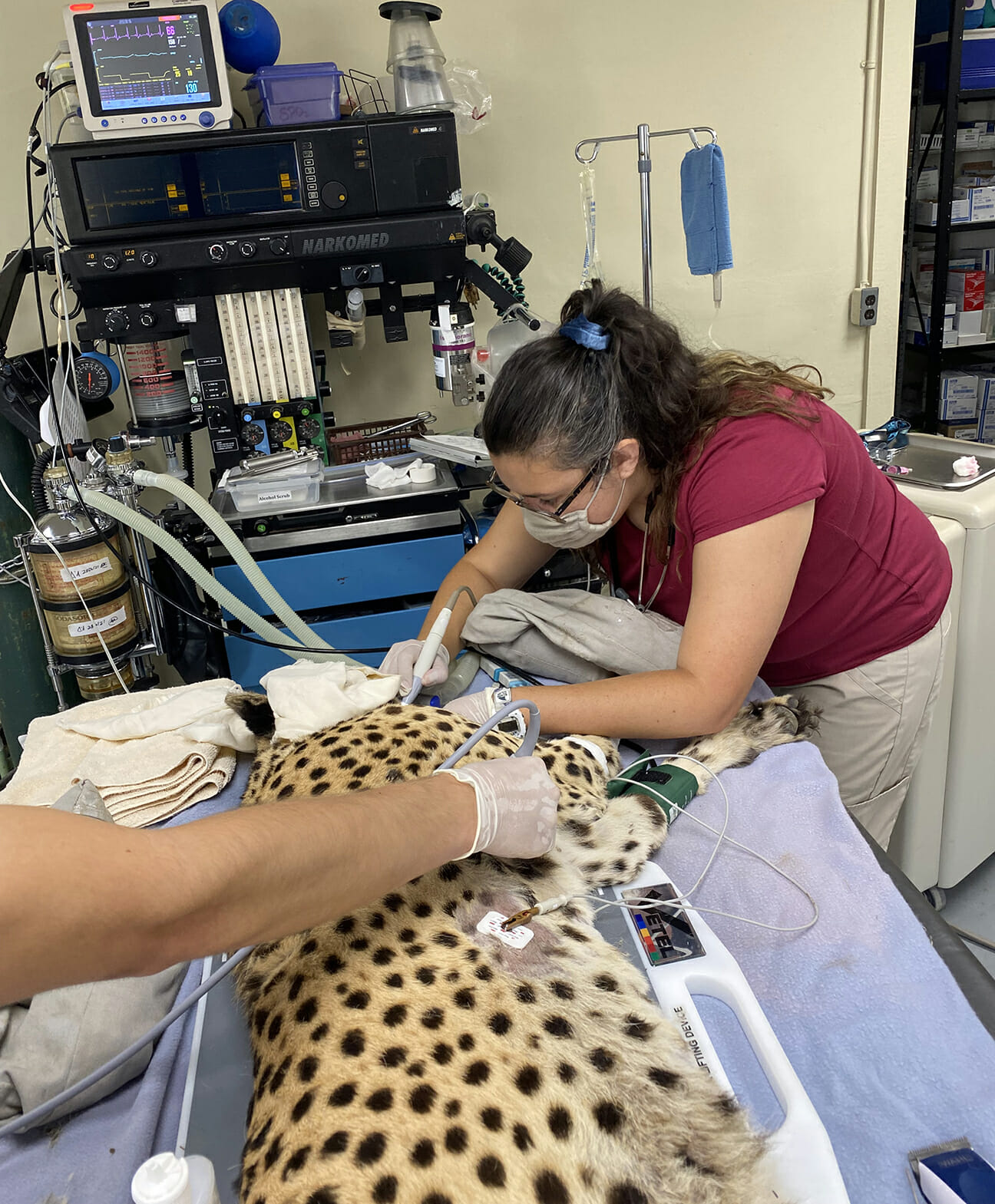 “The large hoofstock collection and the vast mixed-species pastures really attracted me to Fossil Rim,” said Cassie Rojas about why she chose to pursue a veterinary preceptorship at Fossil Rim Wildlife Center.

The San Diego native spent six weeks of her final year in veterinary school as part of the animal health team. She is a Ross University student who is completing her clinical year at the University of Missouri and will be graduating this fall.

“I spent a lot of time growing up visiting the zoo and have always had a love for animals,” she said. “I was very young when I first decided I wanted to be a vet, but really started researching and pursuing it seriously in high school, which is when I decided I wanted to work in zoo medicine specifically.”

“That’s where I first heard of Fossil Rim,” Rojas said. “I worked with a variety of hoofstock species in San Diego and it’s a small community, especially when you’re talking about places that house large numbers of these exotic hoofstock species. I had Fossil Rim high on my list and visiting their booth at the AAZV (American Association of Zoo Veterinarians) Conference really solidified my choice.”

Prior to her time at Fossil Rim, Rojas spent two months as a preceptor at Lincoln Park Zoo in Chicago.

“I’m incredibly grateful to have experienced veterinary medicine in both a traditional urban zoo and a more free-ranging facility,” Rojas explained. “The schedule is so fluid here with something new always springing up. I feel like I’ve had so much hands-on experience; I think in my first week we did more procedures than I had in a month back at school!”

When asked what her favorite experience had been, she couldn’t pick just one.

“I came here because I love hoofstock, so the number of immobilizations we’ve done has been amazing and each one was a really great learning experience,” she replied. “I have also been able to participate in more routine cheetah examinations than I ever expected, which have been my first experiences with large cats. I was able to practice my ultrasound skills, perform blood draws, and monitor anesthesia.”

“Oh, and chickens!” she exclaimed. “Attwater’s prairie chickens are highly endangered birds native to coastal Texas, and I honestly didn’t know much about them before I came here. Fossil Rim has a wonderful breeding program and I arrived right near the end of chick season, meaning I got to see chickens twice a day on most days. I’ve learned a great deal about avian medicine and was able to participate in two shipments where we examined each bird and worked with the U.S. Fish and Wildlife Service to transport them to the national refuge.”

Rojas spoke about her unique experience being here during the transitional period from one veterinary fellow to another.

“My first two weeks here I spent a lot of time with Lauren, who was at the end of her fellowship year, and then Zack arrived to begin his year,” she explained. “(Dr.) Lauren (Pudenz) was so knowledgeable about Fossil Rim protocols and procedures, and it’s been great to learn alongside (Dr.) Zack (Dvornicky-Raymond) as he quickly gets up to speed on how things run here. He has been so enthusiastic about the program and helping me learn.

“Everyone here has been so willing to teach and share information with me. (Dr.) Julie (Swenson) loves taxonomy and our van rides around the grounds are great times for taxonomy quizzes. (Dr.) Holly (Haefele) really likes to point out native wildlife and plants so our rides usually consist of us exclaiming excitedly about something out the window.

“Allyssa (Roberts) has helped walk me through fecal parasite exams and blood draws on a variety of species, and she is always willing to assist me when I need it. I feel like I have gained so much from each person I’ve worked with here.”

When asked what is next for her, Rojas smiled.

“I’m not sure yet, honestly,” she said. “I have an emergency rotation back at the University of Missouri and then I’ll be graduating. My plan is to follow the traditional route into zoo med – internship and residency – but I’m still figuring out what I’m doing in the coming months.

“I’m hoping to take everything I’ve learned at Fossil Rim and continue to expand my zoo medicine knowledge, including journal club to continue to stay up to speed on all the new material being published. This has been an incredible experience and I encourage anyone who is interested in zoo medicine, especially at a semi-free-ranging facility, to check out Fossil Rim!”