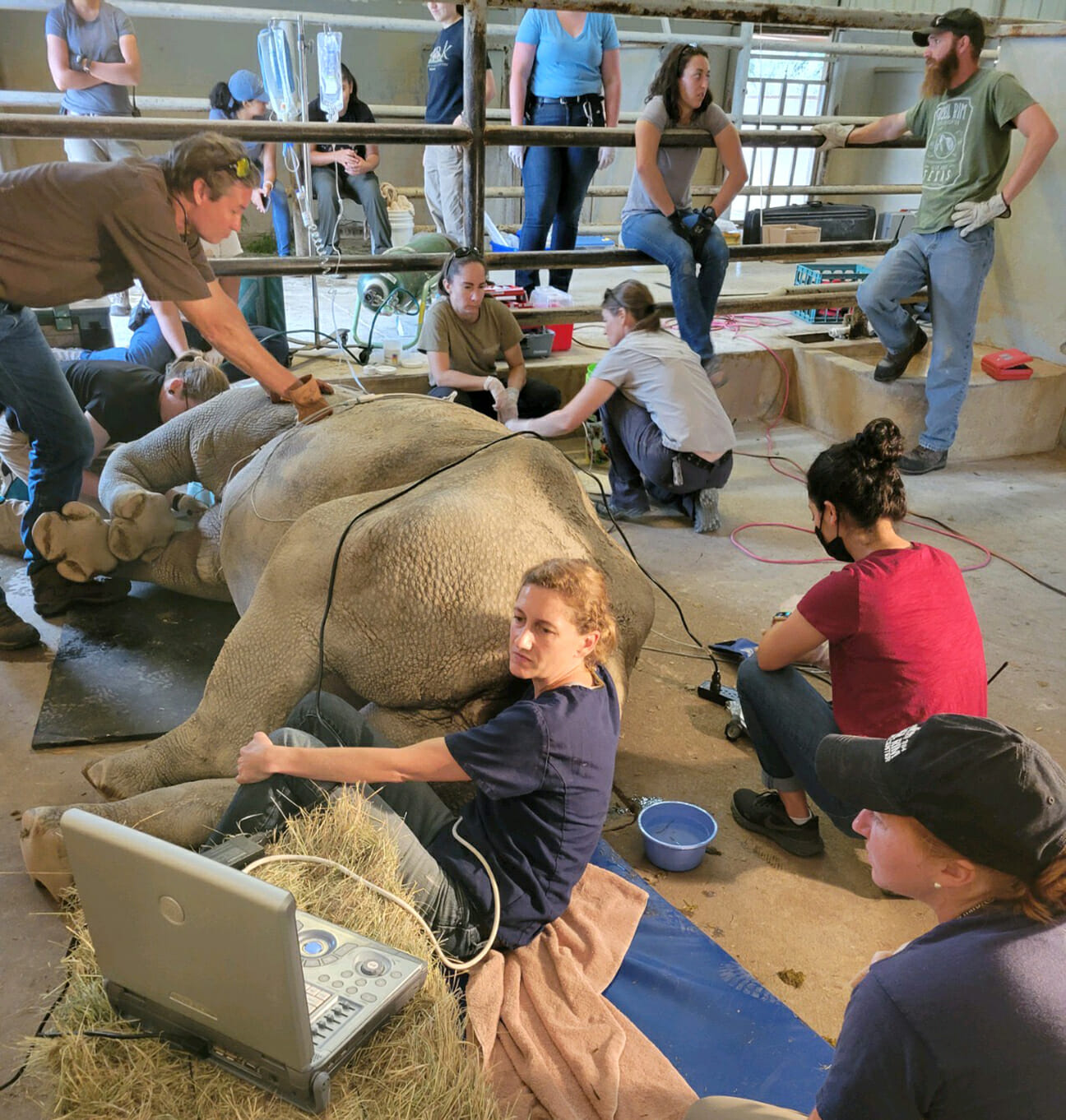 While three southern white rhinos have been born at Fossil Rim in the past five years, reproductive success for the facility’s southern black rhinos has proven far more challenging.

For Director of Animal Health Dr. Holly Haefele, her veterinary team, and the hoofstock staff, they are motivated to find answers to the question of why there has not been a southern black rhino calf on property for a decade now. It is a big deal, because the black rhino in general is “Critically Endangered,” but with an increasing population trend.

“Fossil Rim has had southern black rhinoceroses since 1984, which predated the creation of the International Rhino Foundation (IRF) in 1989,” Haefele said. “During the last decade, this southern subspecies was no longer managed by the AZA (Association of Zoos and Aquariums). It became the IRF and C2S2 (Conservation Centers for Species Survival) who took leadership for what is called the Southern Black Rhino Sustainability Program.

“Originally, when they exported the southern black rhinos from Zimbabwe due to the very high poaching threat, the moves were to try to secure a breeding population. The animals were split between two continents to hopefully make the population more secure.”

Knowing their small captive population overall, it would be all the more important if breeding success could be achieved at Fossil Rim once again.

“Black rhinos are a challenging species and, certainly in the last 15 years, they have not been breeding at the rate we’d hoped for,” she said. “Some of these animals are starting to get older and if they haven’t bred, their likelihood of some pathology in their reproductive tract increases with age. This is well-documented in white rhinos and cheetahs.”

“Coco” is getting older and she is not part of the breeding considerations. As for the other females, “Salsa” and “Mupani” are middle-aged, as is the male, “Uhuru.”

“We haven’t had a black rhino calf born here since 2011,” Haefele said. “It was Mupani’s calf. Unfortunately, it died shortly after birth with several congenital malformations. It was probably a fluke outcome, but we know she can carry a pregnancy to term; the question is why hasn’t she gotten pregnant since then? Salsa came to us as an adult female with no history of pregnancy, and we wonder why she hasn’t gotten pregnant either.”

In an effort to find some answers, Fossil Rim recently sought the help of Dr. Parker Pennington, who is currently a reproductive physiologist at the Smithsonian Conservation Biology Institute (SCBI).

“She collaborates with C2S2 on the management of this southern black rhino population, so Dr. Pennington traveled here to assess the reproductive status of Mupani and Salsa,” Haefele said. “We did some reproductive assessments on Salsa and Uhuru in 2017; we had a reproductive physiology team come from the Cincinnati Zoo. They did a sperm collection on Uhuru, who had only been with us a few years at the time, and we wanted to make sure he was viable, which he was.

“At that time, we found some very small cysts on Salsa’s uterine wall, as well as vaginitis that she was treated for, but overall her exam results were pretty good. We did a full immobilization with anesthesia to get imaging of the uterus and ovaries. The immobilizations are a slight health risk, but we felt the exams were important enough then to find out their status, and to consider again this year since neither female has gotten pregnant since.”

Animal staff has witnessed breeding behavior between the bull and Mupani, but not between him and Salsa. While his sperm are viable, the staff is less certain if his breeding behavior is sufficient for the job.

“Prior to doing the recent immobilizations and exams, we wanted to check and make sure we hadn’t already gotten lucky with a pregnancy, so we collected fecal samples for just over a month and sent them to Dr. Pennington,” Haefele said. “At the SBCI lab, the progesterone levels were measured and we verified that neither one was pregnant, but at least that cleared us to go ahead with the immobilizations.”

After Pennington made the trip to Fossil Rim, the first of the two rhino procedures ended up getting underway around 7 a.m. on June 21, since the staff wanted to finish before the summer heat really ramped up.

“There are a lot of moving parts for a rhino immobilization, so it requires planning and expertise on behalf of the animal care and animal health teams,” Haefele said. “We’ve done a lot of rhino anesthesia here, so we’re comfortable with our protocols and procedures. Fortunately, everything went so smoothly that morning that we finished the second exam before 9 a.m. Both rhinos were very cooperative for hand injection of their anesthetic drugs, which is a credit to their training.

“They got the injection in their forelimb and neither reacted. Fifteen minutes later, we had hands on them and had started our work.

“Dr. Pennington was able to get all the images she needed. It’s easier to get images when a rhino is standing up, but for safety we went with the full immobilization, got each rhino propped at about a 45-degree angle, and it still worked out.”

While it was a follow-up to Salsa’s 2017 reproductive exam, this was the first one for Mupani.

“Salsa has developed a few more cysts since then, but her uterus still looks okay and likely in good shape for a pregnancy,” she said. “What we don’t know is how regularly she has an estrus cycle. We know Mupani has a consistent, 28-day estrus cycle because we can see breeding behavior between her and the male. It’s possible Salsa is alright hormonally, but maybe she and Uhuru don’t get along to facilitate breeding behavior.”

Since Salsa “passed” her exam, the focus now is on confirming her estrus cycle.

“We’ll collect fecals three times per week for two months, which we’ve already started, and record her progesterone levels,” Haefele said. “That will tell us what her ovaries are doing – is she ovulating and having a regular cycle? If she was trained to accept rectal ultrasound, that would be the ideal way to do this.

“Dr. Robin Radcliffe, my boss when I first started at Fossil Rim, had done that with both our white and black rhinos, as well as written some of the original publications on that research in the early 2000s. We hope to be able to get the training going for the rectal ultrasounds again primarily because of what we found with Mupani.”

The exam for the younger female rhino found a small amount of fluid in her uterus. While it may have already dissipated, at least in horses, that is known to potentially interfere with conception.

“The breeding may go okay, but then the fertilized egg tries to settle in the uterus and the fluid prevents it,” she said. “We’ll need to ascertain if the fluid is still there. If so, there are some drug regimens we can try to help clear it out. We are in the planning phase to decide how we want to proceed with her.”

Uhuru may need to transfer to another facility if it is determined that a different bull is best for the breeding efforts.

“For Uhuru, we need to assess his behavior to know if he is going to work out as the breeding bull,” Haefele said. “Artificial insemination sounds great and has been very important for some zoological species like black-footed ferrets, yet it remains a rarely used option because of associated difficulties. Fossil Rim was involved in the first in vitro fertilization and embryo transfer in cheetahs (https://tinyurl.com/xh6p3kuj), so there are people working on this technology.

“Artificial insemination has been done in rhinos, but very few times. San Diego Zoo is working on embryo transfer as a last-ditch effort to save northern white rhinos, so I’m not saying it’s impossible, but it’s not an easy fix for us in the near future.”

While there are still questions to be answered in the pursuit of black rhino calves at Fossil Rim, the key is that Dr. Pennington did not find anything extremely concerning that rules out Mupani or Salsa from motherhood.

“Salsa and Mupani are both only middle-aged, so it is not as if they are close to being too old to have a calf,” Haefele said. “Plus, as I mentioned we know Mupani ovulates regularly and has carried a full-term calf in the past. These June exams were the first steps to getting them each to a pregnancy and we will keep working to facilitate that.”