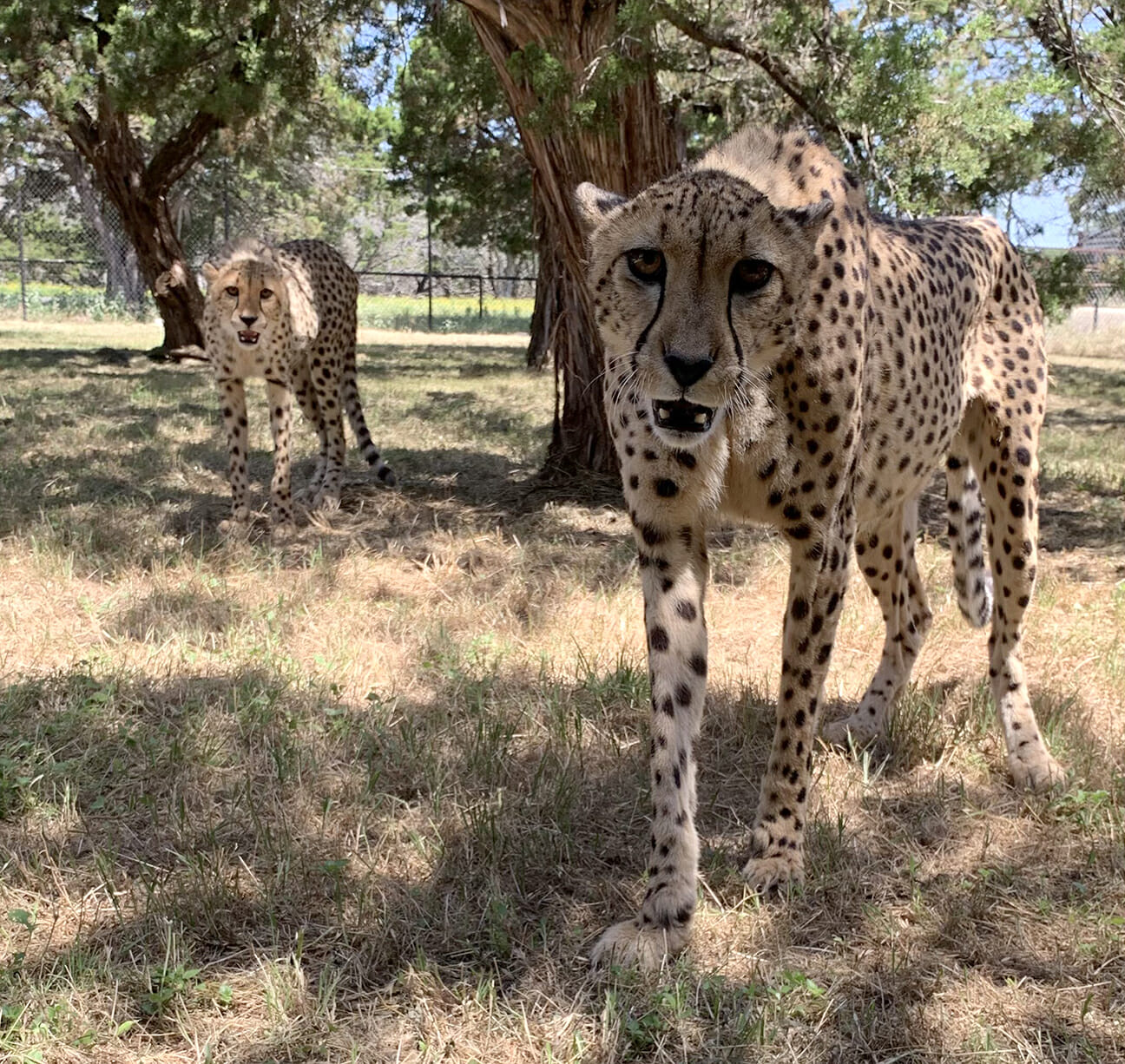 The cheetah “Meatlug” has encountered some adversity in her young life, but quality veterinary care continues to keep her on the right track toward adulthood.

Meatlug is a 14-month-old female named after a character from the How To Train Your Dragon movie franchise. Associate Veterinarian Dr. Julie Swenson mentioned the cheetah had been doing well through her first year outside of an incident as a small cub.

“She wasn’t able to nurse, and we didn’t know what was going on initially,” said Dr. Holly Haefele during a 2020 retrospective on the animal health department. “We thought maybe (the mother) wasn’t making enough milk and only the stronger cub could still get the necessary nourishment. When we got hands on the one that was losing weight, we gave it an exam. Julie looked in her mouth and happened to see something that looked strange way in the back of her throat.

“Julie used an instrument to pull out a large, shaved wood chip. We use pine shavings in all the dens and, for whatever reason, this cub got a large one stuck in the back of its throat.

“After removing it, the cub began doing great and regaining weight. A weird thing that will probably never happen again, but thank goodness we found it to avoid disaster for that cub.”

A year later, Meatlug once again required an examination from the veterinary team.

“At 12 months old, she started to have some undigested meat in her feces,” Swenson said. “Because she was still with mom and her sibling, we didn’t want to have to pull her out and disrupt the dynamic in the group. So, we originally treated her symptomatically with a routine course of antibiotics for 2-3 weeks to see if we could resolve the issue. Meatlug was acting pretty alert, but was still a bit smaller than and not as eager for food as her sibling.”

When it was determined that the antibiotics were not working, staff made the decision to immobilize the cheetah for an evaluation.

“Her radiographs were very dramatic,” Swenson said. “Most of her intestines were in her chest cavity, which was consistent with a large diaphragmatic hernia and was certainly why she was having trouble digesting food. It was surprising she hadn’t shown more difficulty breathing with that much of her abdominal contents impinging on her lungs.”

As she explained, it is not a hernia on either end of the size spectrum that is the most problematic.

“It’s a medium-sized hernia that’s the most dangerous, where the intestines can move in but then get trapped as gas builds up, making it difficult for them to slide back out to where they belong. So, the size of Meatlug’s hernia was scary because it was so big, but it wasn’t the most dangerous since there was little-to-no risk of intestinal entrapment with a hernia that size.”

Even so, once the large hernia was discovered, the veterinarians knew surgery would be required.

“Since it would require an open chest cavity during surgery, we wanted to bring her up to the surgical center so the surgery would be as fast as possible with minimal complications,” Swenson said. “Dr. Katherine Wells at Dallas Veterinary Surgical Center offered to perform the surgery for us; she’s a residency-trained veterinary surgeon. Five days after finding the hernia, we were able to get her into surgery, which is really amazing because the center’s schedule usually fills up quickly, but Dr. Wells rearranged her schedule to make time.”

Swenson said that Meatlug seemed okay in the days leading up to surgery. Though she was not quite normal in terms of appetite or activity, her symptoms were surprisingly mild considering the hernia size and nothing especially unusual happened in her behavior.

“We took her to Dallas for surgery; the surgery itself was very fast,” Swenson said. “By the time of surgery, Meatlug actually had more of her GI contents that had slipped up into her chest between her first exam and her surgery – some of her colon, most of her small intestines, and part of her stomach, plus her liver had been twisted. Her spleen was adhered to the hernia and had to be peeled off, but other than that minor issue there were no significant complications.”

Once her organs were moved back into their proper cavity, it was a simple primary closure where sutures were applied to the hernia and then Wells closed up the cheetah’s skin. Now, it was time to consider the plan for her recovery back at Fossil Rim.

“If this had been done to a domestic animal, it most likely would’ve worn an E-collar and gotten a lot of cage rest until it healed,” Swenson said. “That’s difficult to do for cheetahs, plus Meatlug was still at the age where we wanted her to stay with her mother and sister. If you keep them separated for too long, the mother won’t welcome the offspring back. So, the carnivore staff had an interesting idea.”

With a very large abdominal incision closed via intradermal sutures within the skin, it was less likely Meatlug would disrupt the sutures and require an E-collar.

“We gave her a lot of pain meds to keep her comfortable and not wanting to scratch at the incision site,” Swenson said. “She was given access to one of the fenced-in holding yards where her mother and sibling could be on the other side of the chain-link fence. They had full visual contact and some tactile contact, but not enough to where the other cheetahs could reach her incision site. That was the situation for the first 10 days when she returned, and then she was allowed to be in the same yard with her sister and mom once again.”

“We are very grateful to Dr. Wells and Dallas Veterinary Surgery Center for performing the surgery,” he said. “It was a successful operation and Meatlug has recovered well. She has a great appetite now and will continue to grow and catch up to her sister in size and weight.”

So far, that is two medical scares for one adolescent cheetah, but Fossil Rim’s animal staff will continue to monitor Meatlug’s health as she matures and hopefully has cubs of her own someday.

“We were very concerned about her future when we first diagnosed her condition, but after a successful surgery and managing her through the aftercare, we were able to introduce her back to her mom and sister,” Ahistus said. “The three will likely continue to live together for a couple of years. At that point, one or all of them may move into a breeding situation, either at Fossil Rim or another breeding center. The good news is Meatlug will now live a long and healthy life post-surgery, and that is all we can ask for.”