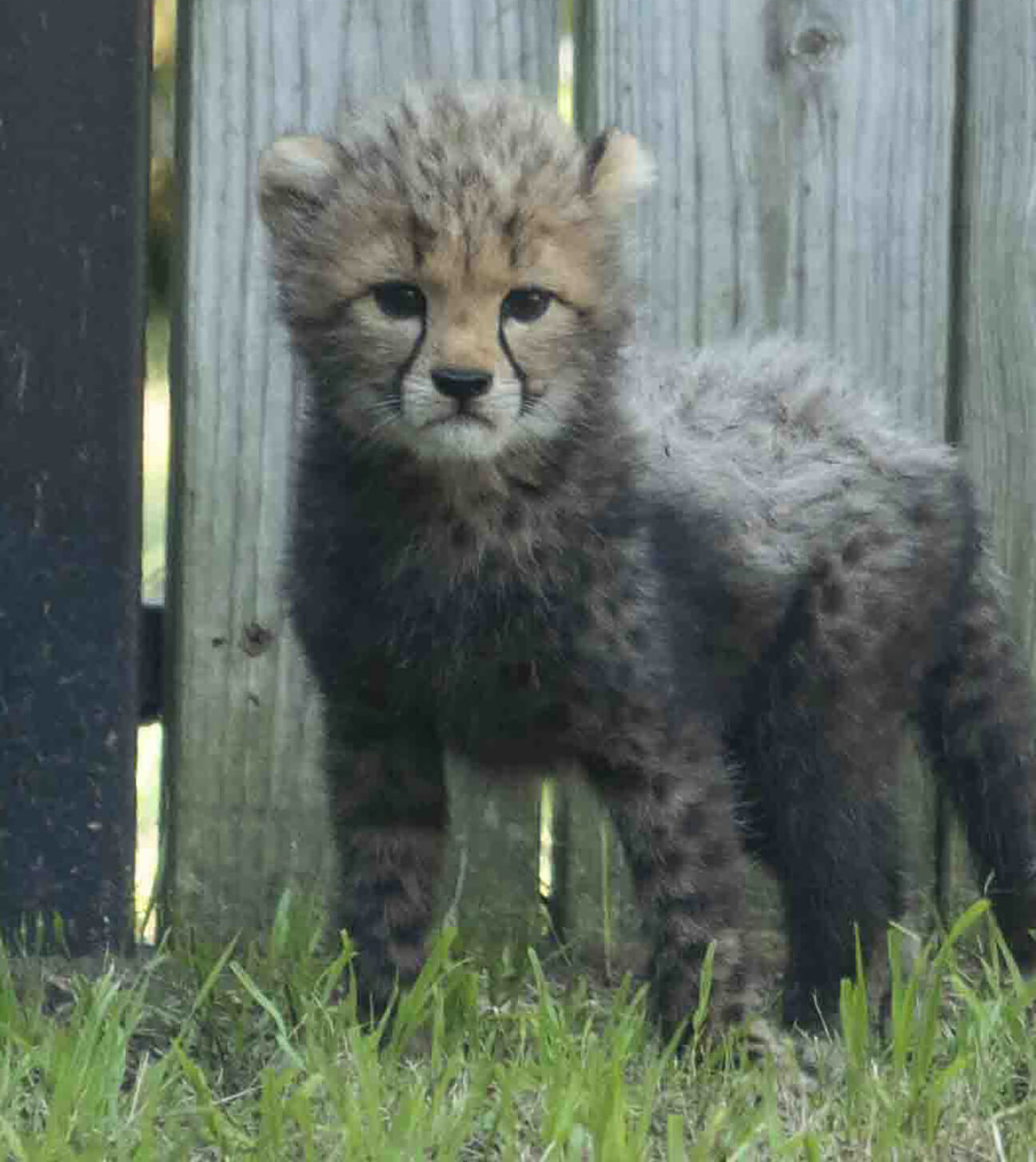 Veterinary Fellow Dr. Lauren Pudenz provided an update on one of the three cheetah cubs that Fossil Rim announced on June 7. Like his brothers that were also named after characters from the television show Vikings, this blog post discusses “Rollo.”

Recently, we announced the birth of “Oshana’s” Viking litter. Initially, everything was going smoothly.

Oshana is an excellent mother and was taking good care of her cubs, which were all growing and developing on schedule. But, when the cubs reached six weeks of age and shortly after they were introduced to solid food, one cub began to have some problems.

The following morning, he regurgitated his food after eating breakfast. Regurgitation is a passive process which involves food sliding back up the esophagus after eating, in contrast to vomiting, in which food is expelled from the stomach via contraction of the stomach and abdominal muscles.

A vascular ring anomaly was our biggest concern. During normal fetal development, several vessels are formed at the base of the heart. As the fetus grows, these vessels either develop into the main arteries, including the aorta and subclavian arteries, or disappear as development continues.

In some animals, the wrong vessels persist and the aorta and other arteries are formed from these vessels, which can lead to the esophagus becoming entrapped between these vessels. The effect is similar to having a rubber band around the esophagus where those vessels surround it.

When this happens, the esophagus is unable to expand when food is swallowed, and thus the animal cannot swallow solid food. Surgery is the only way to correct this condition. Even with surgical correction, the esophagus is usually dilated beyond its ability to return to normal function and the animal is often restricted to a liquid-and-gruel diet for its entire life.

The cubs were due for their six-week checkup, so on the morning of the exams, we fed Rollo some meat mixed with barium. Barium is often used to highlight soft-tissue structures that are otherwise hard to see on radiographs, such as the esophagus.

After examining Rollo, we were able to take radiographs in order to better diagnose his problem. The radiographs showed dilation of the esophagus prior to the heart. This was potentially consistent with a vascular ring anomaly, although it did not rule out our other concerns.

Although zoo veterinarians have a wide range of knowledge about many species and conditions, when we encounter a condition that is also seen in domesticated species, we like to consult with specialists to ensure we are able to offer our patients the very best care possible. In this case, we consulted with Dr. Erika Pickens, a board-certified internal medicine specialist, on our next steps. She confirmed that the best thing for Rollo was to take him for a thoracic CT scan followed by endoscopy to view the esophagus from the inside and allow better visualization in order to make a definitive diagnosis.

Everything came together late that night when MedVet Dallas had an opening occur in their schedule for the following morning. Our Associate Veterinarian Dr. Julie Swenson and our Carnivore Curator Jason Ahistus loaded Rollo up in the wee hours of the morning for the trip to Dallas.

Once they arrived, Rollo was placed under anesthesia. The first step was to perform an endoscopy of his esophagus, where a small camera is placed in the esophagus in order to directly visualize the area.

Rollo’s esophagus was enlarged with food present cranially, but then narrowed to less than one millimeter near the heart, which is very abnormal. This ruled out an esophageal foreign-body obstruction. Following the endoscopy, Rollo underwent a CT scan.

The CT scan confirmed two vascular ring anomalies: a persistent right aortic arch and an aberrant left subclavian artery. This meant that the constriction of his esophagus was due to abnormal formation of his arteries, and open-chest surgery would be the only way to resolve the condition with no guarantee of normal function following surgery.

Whenever we decide to do a procedure on an animal, we always evaluate its prognosis and long-term quality of life. For Rollo, surgery would require significant postsurgical care under hand-rearing conditions, which would be incredibly stressful for a dam-reared cub. Additionally, this care would mean that he would need to be hand-reared for the remainder of his youth.

Hand-reared male cheetahs rarely manage to breed and even if he did, vascular ring anomalies are genetic, which means Rollo could never be a breeding animal. A cheetah switched to hand-rearing after six weeks of dam rearing would also be unable to adjust to life as an ambassador animal, and would continue to find human interaction incredibly stressful for the rest of his life. He would also most likely require a gruel diet and still have a very high risk of regurgitation and aspiration of food, which can be life-threatening.

With all of these considerations in mind, we made the difficult decision to euthanize Rollo rather than set him up for a poor quality of life long term. It is a tribute to the quality and thoroughness of our animal care and animal health teams, as well as the generosity and expertise of Dr. Pickens and MedVet, that we were able to have a diagnosis only four days after Rollo’s initial clinical signs.

During his postmortem examination, we were able to see his persistent right aortic arch and aberrant left subclavian artery, which profoundly constricted his esophagus. This condition is rare in the felid family and undocumented in cheetahs, so Rollo’s legacy will be a scientific publication documenting his unusual condition.

5 thoughts on “Difficult Decision Made For Cub With Rare Condition”