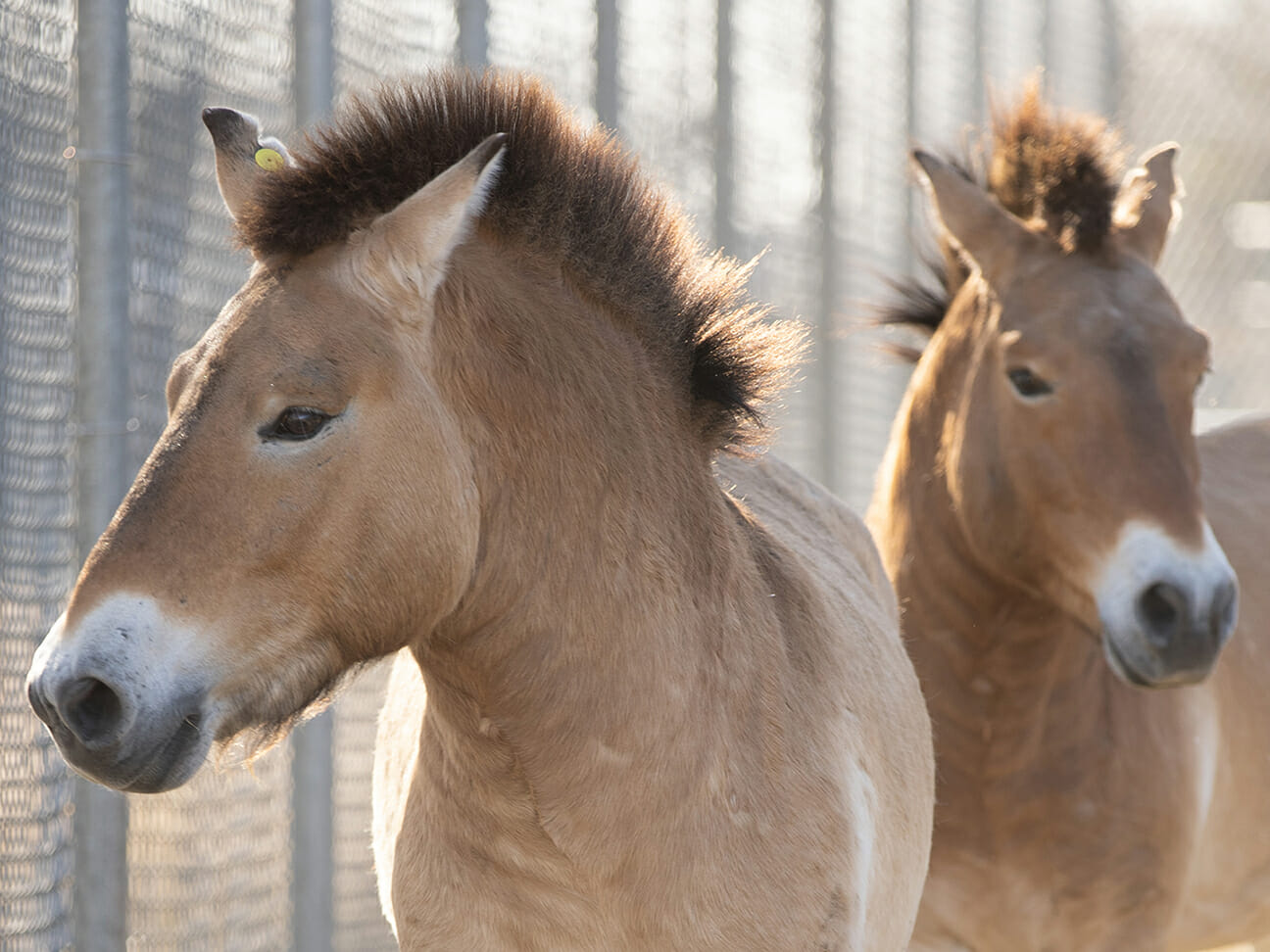 As 2021 rolled around, Fossil Rim’s Przewalski’s horse population temporarily declined to the benefit of students at Texas A&M University.

In December 2020, Fossil Rim Director of Animal Care Adam Eyres contacted Dr. Alice Blue-McLendon with the opportunity to provide a home to “Dash” and “Tegus” – “P-horses” that are nine and eight years old, respectively. Blue-McLendon is the director of Texas A&M’s Winnie Carter Wildlife Center.

She saw the potential acquisition of the P-horses as a great opportunity to help students understand conservation and how Species Survival Plans (SSP) work – in this case the Asian Wild Horse SSP.

Fossil Rim Director of Animal Health Dr. Holly Haefele agreed with the notion that Dash and Tegus could provide a learning opportunity, particularly for students in the university’s College of Veterinary Medicine & Biomedical Sciences – the department in charge of the wildlife center.

“Dash and Tegus can now reach a different audience with a conservation message,” Haefele said of the endangered equids. “Living at the university’s wildlife center, students can get exposure to them and many other exotic and wildlife species. You hope that the next generation of zoological students learns a lot from them being there.

“These two will not be needed by the Asian Wild Horse SSP any longer for breeding. Sometimes, an animal’s genetic value in the population can change quickly. If you think about cheetahs, for example – a female that has a litter of two cubs versus a female that has a litter of eight – the need for the genetics of the mother with eight cubs could drop significantly after that litter.”

Conservation Does Not Always Mean Breeding

Fossil Rim is a holding facility for some species, such as P-horses. Instead of trying to facilitate breeding pairs, the intent is to provide space for individuals of a species to live so that space is freed up at other institutions that are hosting active breeding situations.

“For most hoofstock species, males become a problem because of housing and behavior,” Haefele said. “For the vast majority of species, you cannot house multiple in-tact adult males together, because they will fight – usually over territory or females. In our herds, about half of the babies are generally males.

“They often go to other institutions, but sometimes they are held in bachelor groups. In some rare instances, they can live together in a herd; kudu adult in-tact males will tolerate each other.

On occasion, other wildlife institutions will send their males to Fossil Rim. The P-horses are an appropriate example of this, as Fossil Rim holds excess males for the Asian Wild Horse SSP.

“We also currently do this for bontebok,” Haefele said. “These aren’t species where a breeding herd is in our plans at this point, but we do have a bit of extra space to hold these males.”

Fossil Rim has the 10-acre “Terrace Pasture” devoted to P-horses. That is similar in size to the White Rhino Yard that guests may be more familiar with.

“At some point, almost all male individuals become surplus to the SSP of their species – their genetics are well-represented enough in the population or there is some other thing that prevents them from being part of the SSP breeding population,” Haefele said. “At that point, their genetics are no longer needed for the SSP, so they might move on to do other things with their life. That’s what happened with these two P-horses.

“We’d been holding them as potential breeders for the SSP, but their tickets never came up for whatever reason. Once they were no longer needed by the SSP, we tried to find them good homes. That’s where Texas A&M came in.”

While at Fossil Rim, Dash and Tegus had minimal human interaction. Though Blue-McLendon said she does not expect the P-horses to ever allow petting, she mentioned they will get some training to make it easier to perform veterinary procedures on them like routine vaccinations and “because of their daily interaction with lots of students and staff, they’re already becoming a little bit more approachable than I expected.” They will get hoof trims 1-2 times annually, but those require anesthesia.

Dash and Tegus shared a fence line with female Grevy’s zebras at Fossil Rim, but otherwise were only in close proximity to other male P-horses and small native species. At Texas A&M, an article the university released this spring said they may live in a shared space with other herbivores.

“We did not manage those two with any hands-on work, so they are definitely getting some more interaction at Texas A&M,” Haefele said. “It can be time-intensive to train animals to cooperate for procedures, and these guys were healthy when they were at Fossil Rim.”

One thing that seems to remain stable from the relocation of the P-horses is their bond to each other, as Blue-McLendon has no plans to separate them.

“Equids will form bachelor groups,” Haefele said. “The bond these two share definitely isn’t an unusual thing. Those relationships change, depending on the situation, such as if a female was introduced. And not all males will get along to the same degree.

“But, if you are trying to house males together and they do bond, that’s a good thing. It makes our lives easier as the people taking care of them.”

“It’s not uncommon for us to ship out cheetah coalition (male) members that will remain together. I think this situation was about Dr. Blue-McLendon having room for two P-horses, as opposed to us really wanting to make sure they stayed together. It’s nice for a herd animal to be in a herd, and specifically for equids who are already bonded, this change of scenery was probably easier to handle when they had the familiarity of each other.”

It is certainly not unusual for Fossil Rim to associate with Texas A&M in a wildlife capacity.

“The biggest aspect of our relationship with Texas A&M, which we’ve had for a really long time, is with retired professor Dr. Jane Packard (of Texas A&M’s Department of Wildlife and Fisheries Sciences until 2015),” Haefele said. “For a long time, she taught animal behavior to undergrads at A&M. She has helped us with many projects over the years. Recently, she was the main supervisor for our hoofstock behavior research interns.

“She put a lot of time into helping those interns develop their scientific writing skills and basic scientific research approach to form hypotheses, progress through data collection and analysis, and then develop conclusions. We’ve had at least 10 interns who really benefited from her step-by-step instruction and expertise.”

Only a 30-mile drive from Fossil Rim, it should come as no surprise that Tarleton State University would be the other university with a particularly high degree of interaction with the wildlife center.

“We have an MOU (memorandum of understanding) with Tarleton to undertake research together,” said Haefele, who is in charge of Fossil Rim’s scientific research endeavors. “We’ve had a half-dozen master’s students who have done in-the-field research for their degree out here at Fossil Rim. At least three of those students were studying the spinose ear tick.

“That relationship is strong and we are always discussing potential collaborations with Tarleton. It makes sense with their close proximity to Fossil Rim.”

The Future Of P-Horses At Fossil Rim And Beyond

While P-horses at Fossil Rim live in a private pasture, there have been some specialty tours in past years that allowed guests to visit them. When that tour option returns, it will definitely be publicized. For now, the mere presence of P-horses is a big deal because they are one of Fossil Rim’s 12 species that are some degree of endangered.

“We will continue to use that same pasture for the P-horses we do have, because that area has worked well for them so far,” Haefele said. “As I mentioned, the interaction of the P-horses all depends on the social dynamics over time as the individuals change. If they all get along, that’s great.

“If they are in two groups of two, that’s good. Ideally, each individual has a buddy.”

While P-horses are “Endangered,” they do have an increasing population trend. With reintroduction efforts underway in China, Kazakhstan, and Mongolia, the global population is estimated to be roughly 2,000 today.

“P-horses are cool and their conservation story is a good one,” Haefele said. “They were declared ‘Extinct In The Wild’ in 1969, but were saved by a captive population that became available for release back into the wild. They followed a similar path to the reintroduction of the Arabian oryx, more recently what is happening with the scimitar-horned oryx and hopefully soon we can add addax and dama gazelle to the list.”