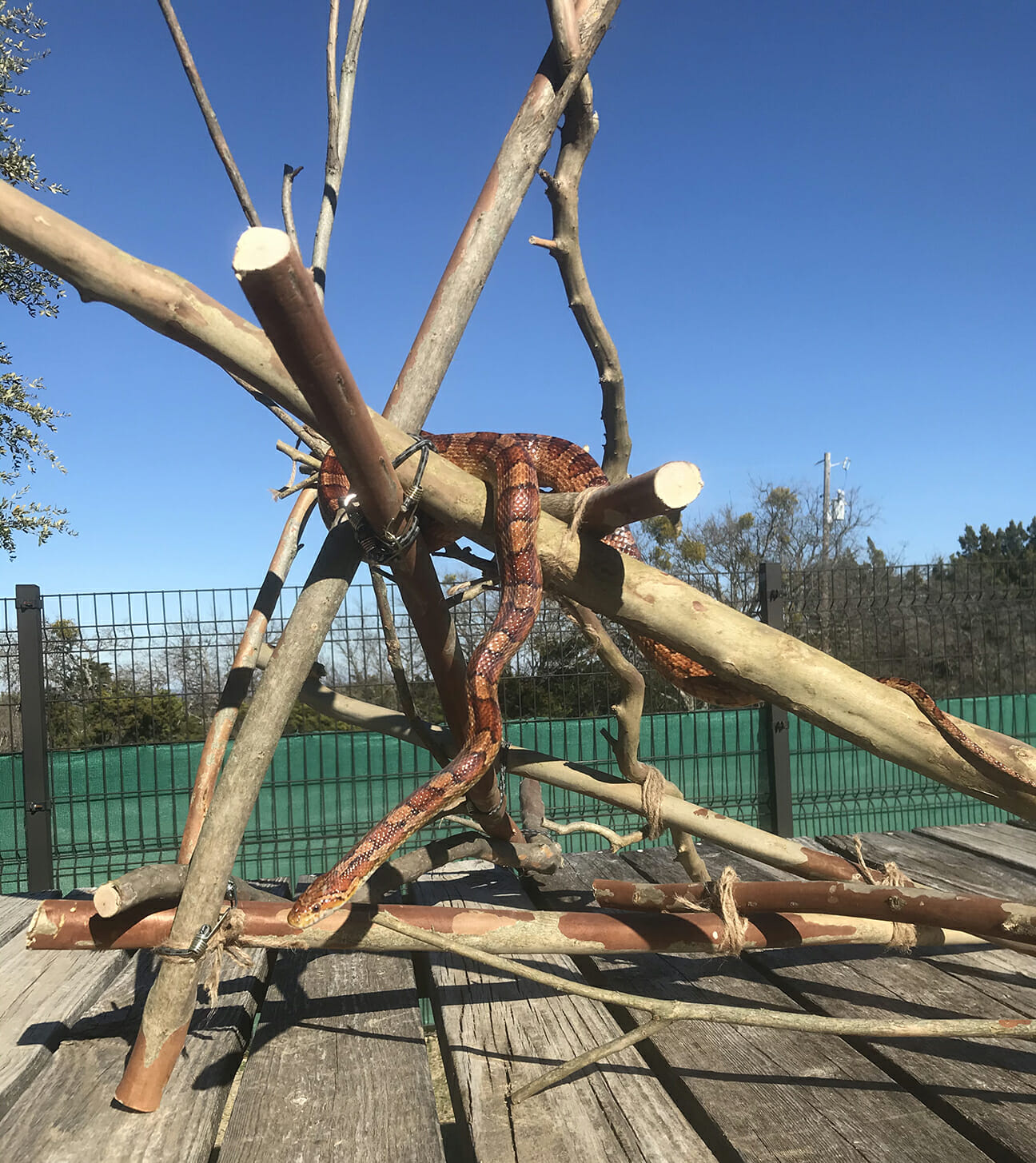 While the Children’s Animal Center (CAC) is closed this winter, snakes are always on the mind of CAC Supervisor Kristina Borgstrom.

She recently discussed snakes in the wild and the legless residents at Fossil Rim.

“Here in Texas alone, we have more than 115 species of snakes,” Borgstrom said. “About 30 species live here in Somervell County. For those who are not familiar with the CAC critters, we have three nonnative snakes in our ambassador animal collection – a corn snake, a California kingsnake, and a rosy boa.”

Why don’t we see wild snakes in the wintertime and how do the snakes living at the CAC deal with the colder temperatures?

“Reptiles, just like warm-blooded animals and even plants, have their ways of dealing with the cold,” she said. “Many folks know about small mammals and bears going into hibernation in the winter. These animals spend all of the fall season filling up on nutrient-rich meals to build fat reserves needed for their long winter sleep.

“Snakes typically enter brumation sometime from September to December and will remain in that state until March or April,” Borgstrom said. “These animals have both biological and environmental cues that trigger this process. Internal, or endogenous, cues include hormonal changes, as well as shifts in neurotransmitter levels and amino acid concentrations. External, or exogenous, cues include changes in photoperiod, barometric pressure, humidity, and temperature.”

It is believed that exogenous cues are the more important variety in regard to reptiles inhabiting temperate zones such as Texas.

“Not all species of reptiles have biological cues for this process and this is an area that is not fully understood yet,” Borgstrom said. “During brumation, snakes become lethargic within a range of reduced movement to no movement at all. They will reduce their food intake or skip eating all together, reduce metabolic functions, and lower their heart and respiratory rates. These animals will try to find a humid area to avoid dehydration or they may awake on occasion to find water.

“This winter slumber is also thought to prepare individuals for breeding in the spring by triggering sperm production in males and preparing females for ovulation. Brumation is an extremely trying time for all reptile species in the wild and in captivity. Many wild reptiles that enter brumation never emerge from that state once spring arrives.”

Where do snakes go when the time comes for brumation?

“In the wild, a snake typically goes into a warm protected place called a hibernaculum,” she said. “They use burrows in tree stumps, deep leaf piles, dens of other animals, rock crevices, caves, and deep caverns. In more urban areas, snakes will seek refuge in crawl spaces, basements, boiler rooms, garages, woodpiles, storage spaces, etc. Oftentimes, snakes will even share dens to use the body heat from other snakes to better survive the winter.

“These dens consist of males, females, babies, or even different species. Males will typically emerge first in the spring to defend their breeding territories.”

Borgstrom discussed how the snakes at the CAC cope with the coldest months of the year.

“At the CAC, our resident California kingsnake exhibits a similar winter slowdown in her terrarium,” she said. “’Kingsley’ typically begins her fasting period in September and carries it into February. While she does not go fully into brumation with her terrarium having set temperature and light patterns, she will still participate in seasonal fasting and chooses to stay on the cooler side of her home.

“During this time, she switches to eating a meal every 3-4 weeks versus her typical once-a-week feeding schedule. It is not uncommon for her to have some weight loss during this time, but she will make up for it in the spring and summer months.”

Borgstrom said that while the CAC remains closed to the public, the staff still wants to make sure the resident snakes maintain a healthy lifestyle.

“Our staff handles these snakes regularly to keep them at a comfort level with humans that is needed for their participation in future programs for the public,” she said. “Along with this, we have been creating fun food puzzles and constructing ‘trees’ for climbing that help keep their minds active and provide exercise.”

On a warm day in early February, “Nigel” the corn snake got a basking opportunity under the sun.

“He explored his new snake tree built by our interns Sierra and Amber,” Borgstrom said. “Kingsley got to try out a PVC pipe tree inside the building on one of her more active days.”

Nigel received another enrichment opportunity when it was time for his meal.

“Nigel enjoys searching for his meal that is concealed in a hamster tube,” she said. “Snakes will flick their tongue in and out at faster rates when they have caught the scent of their prey item. In this particular example, it took Nigel about 10 minutes to find his meal on his own.”

Borgstrom looks forward to the CAC’s reopening so that she and the staff can teach guests about these snakes and all of the other animals.

“We are hoping that when the CAC gets back to having guest programs, we can use similar props for our animals to be displayed on, as opposed to always holding them in our hands,” she said. “It is great to see these animals exhibit natural behaviors because it is more captivating for our visitors.”