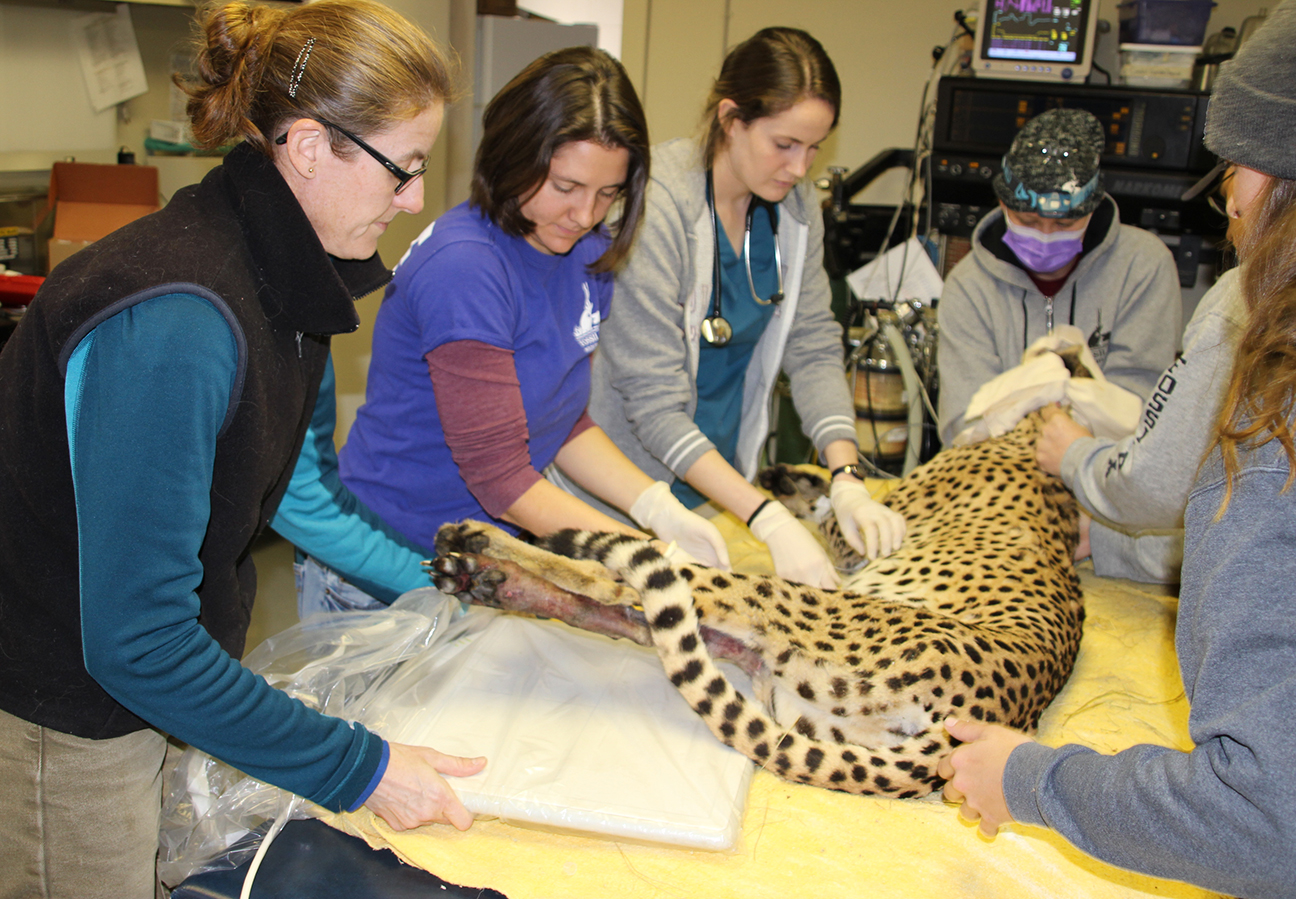 While 2020 may have been the worst year many of us can remember, there are always points of positivity hidden amidst the adversity.

Fossil Rim Director of Animal Health Dr. Holly Haefele recently took some time to update good outcomes for some individual animals, highlight staff achievement, and more. In no particular order, let’s check out a dozen news items that might just turn any given frown upside down.

“We’d had success integrating a giraffe and feeding it bottles from the vet van. We were pleasantly surprised that she was accepted, and then she’d come over to us for bottles. Ethan (Bloomer) the vet student is going to write up everything we did and submit it to Zoo Biology scientific journal.

“If other facilities are ever faced with this situation, they have something to refer to. Ethan is out in the pasture and she’s doing well.”

For more on Ethan’s story, check out this December blog: https://tinyurl.com/y62tpgaw.

“We had to perform surgery on Bria and couldn’t reunite the cubs with her at two weeks of age,” Haefele said. “We shipped two of them off to be fostered with another litter, and they are doing fine. We kept the other three and hand-reared them. They are nine months old, all girls, and live on Cheetah Hill along the scenic drive.

“They play nonstop and seem happy. Bria also went to a different breeding center in November in exchange for another female cheetah. Her surgery was a small incision in her stomach and she was perfectly fine soon after; it just disrupted her care for this particular litter.”

For more on the early days of these cubs, here’s a blog from April: https://tinyurl.com/y85cllxq.

“We found the scimitar at about 7:30 p.m. one evening,” Haefele said. “A yearling female that must’ve been in the wrong place at the wrong time – we think based on the wound size on the side of her body that it was caused by a white rhino horn. She was obviously in trouble. We darted her about 8 p.m. and took her to the clinic.

“She was really lucky, because it was only a two-inch tear in the lining of her abdomen. The wound was almost totally external to the abdomen. She had a lot of muscle damage, but with minimal damage to the abdomen, I was able to clean the wound really well, close the tissues, and spend a long time sewing up such a large wound.

“We had her at the pens for a while on pain meds and antibiotics; she recovered so nicely. When it looked like she was good to go, we put her back with the herd. She’s totally back to normal, other than her cool scar.”

“This was another major surgery within days of the scimitar surgery, and it was also performed at night,” Haefele said. “This deer had undergone drastic weight loss, and it turned out she had two dead fawns in her uterus. They’d started to deteriorate, so her uterus was severely infected. There was really no way to get them out other than by Cesarean section.

“It’s a big surgery requiring cutting into the abdominal cavity and uterus. Our fellowship veterinarian (Dr.) Lauren (Pudenz) was able to take the fawns out and clean up the deer as best she could. We kept her at the clinic for a while on pain meds and antibiotics before sending her back out into the pasture.

“That deer is tough as nails and recovered nicely from her surgery, putting all of her weight back on. We see her often, and it’s to be determined if she can reproduce again. That was very valuable experience for Lauren.

“A C-section isn’t necessarily something you practice because it’s not a frequent surgery; it’s an emergency. But, having one under your belt makes you feel like you could do another one.

“There is a surgeon’s saying, ‘To cut is to cure.’ If you can take care of the problem, you should do it. It’s very satisfying to be able to get a good result and send her back with the other deer.”

Pudenz referenced this surgery in a general blog about her Fossil Rim experience back in September: https://tinyurl.com/y628ksmz.

Numerous procedures save “Meadow” the cheetah

“Meadow injured her foot by rolling on it awkwardly, which broke all the long metatarsal bones in her rear foot,” Haefele said. “She had a really long surgery performed by a surgeon to stabilize those bones. Meadow now has long metal rods in each one of those four bones, and then she had to wear a cast. Unfortunately, one of her toes became infected to a degree that warranted amputation.

“She required frequent treatment under anesthesia to clean that wound, treat it locally with antibiotics, put a clean dressing on, and then recast her – approximately 50 procedures over six-plus months. Not every cheetah would’ve dealt with it all, but she’s a superstar. She never once missed a meal.

“Meadow is a cool cat and is still here. She got her cast off in mid-June.

“She wouldn’t be able to hunt in the wild, but she’ll be just fine here at 10 years old. We learned a lot about using partial intravenous anesthesia in cheetahs through all the repetition.”

Here is a blog about Meadow’s casting process from the month she was injured: https://tinyurl.com/r3bpu95.

Another fellowship veterinarian named Lauren, but this is Dr. Lauren Schmidt.

“Lion Country is similar to Fossil Rim in that they have large mixed-species hoofstock pastures, so the skills she got here are directly applicable,” Haefele said. “Lion Country is one of the places that does a similar number of hoofstock immobilizations to us, so I think that was a key part of why she was hired. Plus, she’s a great veterinarian and fun to be around. We are extremely happy for Lauren.

“That provides (Associate Veterinarian Dr.) Julie (Swenson) and me more time to tend to other projects for research, mentor former students, read (research) paper drafts, and a lot more. We value that very much.”

Schmidt discussed her year at Fossil Rim in this June blog: https://tinyurl.com/yaesslvs.

“Around the time Bria had her cubs, we had another cat, ‘Missy,’ that had two cubs,” Haefele said. “They were doing great until one of them started to lose weight. She wasn’t able to nurse, and we didn’t know what was going on initially. We thought maybe Missy wasn’t making enough milk and only the stronger cub could still get the necessary nourishment.

“When we got hands on the one that was losing weight, we gave it an exam. Julie looked in its mouth and happened to see something that looked strange way in the back of her throat. Julie used an instrument to pull out a large, shaved wood chip.

“We use pine shavings in all the dens, and for whatever reason, this cub got a large one stuck in the back of its throat. After removing it, the cub began doing great and regaining weight. A weird thing that will probably never happen again, but thank goodness we found it to avoid disaster for that cub.”

“Julie knows Dr. Nossaman from their time in Phoenix when Julie worked at the Phoenix Zoo; Dr. Nossaman was a big supporter for the zoo’s animal health department,” Haefele said. “When Dr. Nossaman relocated to Dallas, she reconnected with Julie. Not only does she come help us with our dental cases, she has been a big supporter of Fossil Rim.

“For example, she recently gave us a very nice dental cleaning machine. It’s a big upgrade for us that is much appreciated.”

Here is a December video about the donation: https://youtu.be/CVo0T5LHc3Q.

“The big story with Attwater’s prairie chickens this year was we did a decent job of disinfecting our facility on the heels of a cryptosporidium outbreak in 2019,” Haefele said. “It is a difficult organism to kill in the environment. We saw a handful of infections, but they happened later so that the chicks had developed a competent immune system prior to exposure and didn’t get sick. In related news, a huge development for us moving forward relates to chick nutrition.

“The largest number of chicks that die are in their first 10 days of life. In the wild, these chicks would be on the prairie eating insects. We can’t replicate that in captivity, so we feed them a pelleted, balanced ration.

“Sometimes, they don’t figure out they are supposed to eat this pelleted food. However, (Senior Animal Care Specialist – Avian) Cara (Burch) figured out that if you wet the food a little bit, so that the chicks get clumps of wet crumble, some of them go crazy over it. Our number of deaths during the 10-day window dropped dramatically this year, and making the food more enticing for the chicks has been a big factor that will boost the program going forward, which is exciting.”

“At this point, our people who presented are working on getting manuscripts written that we can submit for peer-reviewed publications to academic journals,” Haefele said. “Everyone has worked very hard on these and is making Fossil Rim proud.”

For more information on the specifics of the presentations, check out this October blog: https://tinyurl.com/yc2rr6qw.

Dr. Julie Swenson and Dr. Holly Haefele had a manuscript accepted and published by the Journal of Zoo and Wildlife Medicine. The title was “Suspected Moxidectin toxicosis in three species of antelope: Roan, sable, and Arabian oryx, at a semi-free range zoological park.”

“The Journal of Zoo and Wildlife Medicine is the official publication of the American Association of Zoo Veterinarians, the European Association of Zoo and Wildlife Veterinarians, and the American College of Zoological Medicine,” said Swenson. “It is peer reviewed and considered to be one of the major sources of information on veterinary aspects of the field of Zoological Medicine. Publication in this journal is highly regarded and the review process is extensive in order to maintain the excellent quality of the articles.”

The father of the cubs from this procedure is a Fossil Rim cheetah named “Slash.”

“This was written by an SCBI scientist based on Texas animals, and I was associated with the anesthesia portion,” Haefele said.

Dr. Haefele and Adam Eyres contributed to “Comparison of genomic diversity and structure of sable antelope in zoos, breeding centers, and private ranches in North America” in Evolutionary Applications.

“A lot of the samples and information from the sable genomics study came from Fossil Rim,” Haefele said.

Eyres, Dr. Haefele, and Kelley Snodgrass contributed to “Species differences in exhibit use by antelope: addax and sable” in the Journal of Zoo and Aquarium Research.

“This entire project happened at Fossil Rim in collaboration with Dr. Jane Packard from Texas A&M and her students,” Haefele said.

“This update is a big deal for us, because we’ve been talking about a new vet hospital for 10 years,” Haefele said. “About seven years ago, we had some really nice drawings donated from an architectural firm. We’d picked a new site away from the current clinic. Now, we have revisited the idea after some fundraising momentum.

“We don’t like the idea of cutting down trees and destroying any habitat that we have, so we’ve decided the best move would be to place the new clinic in the current footprint where we already are. We might lose a small area of grass, but we are essentially replacing what’s already there with some new buildings. We are all about conservation, so we want to reuse what we can from our old building.

“It was an important decision as we move forward with fundraising. We won’t be able to use the current clinic during the construction, so that’s a plan we’ll still need to formulate.”